813Preps correspondent
BRANDON – En route to a quarterfinal berth last season, Leto won over Bloomingdale on the final day of pool play in the 2017 Saladino Tournament.
The two squads played again this year, on the first day of pool play in the 38th edition of the tourney, in a game that featured stellar pitching and defense on both sides of the scoreboard on Saturday afternoon at Brandon High. And a half-inning of scoring from each saw Bloomingdale get the better of the Falcons, 3-1.
Jesse Hunter took the mound for his fourth start on the still-young campaign for Bloomingdale, while Jakob Ryley got his third start for Leto. Both offenses could not figure out their opposing pitchers until the third, when Leto broke through for their first, and only, run of the game.

Jon Santos stole second with ease with Javy Hernandez at the plate. On a 3-1 count, Santos broke for third, while Hernandez sent a ground ball to short. Santos raced home and would beat out a wide throw to the plate to net the Falcons the 1-0 lead on the fielder’s choice.
The Falcons’ lead would be short lived, as the Bulls put up three runs in the away half of the fourth. Nico Saladino would single in Brock Wilken from second, and would eventually come home on a Kyle Merkle RBI single. Two batters later, Jackson Hobbs poked a
single through the left side of the infield to score Merkle.

“It felt good to come through in that big situation,” Saladino, the grandson of tournament founders Bertha and Tony Saladino, said. “They’re a good team and we knew we were going to have to play well today to come out on top.”

That two-run advantage would be all that Hunter needed to finish out the game. Leto would struggle offensively during the last four innings – including stranding runners on second and third in the fifth.

Hunter got Tomas Lozano to ground into a 6-4-3 double play with nobody out in the seventh to shut down a possible late rally from the Falcons, capping an impressive day from the Bulls’ defense.

Thus, strikeouts were at a premium all around Don Powell Stadium, as Hunter registered the only three punch-outs on the afternoon.
Leto had two double plays of
its own, one in the second and one in the fifth, to keep Bloomingdale off the
board in both instances. Another bright spot for the Falcons on Saturday was
their team speed. Leto swiped four bases on the afternoon, including two from
Santos.
Ryley allowed seven hits
while issuing two walks including the three earned runs. Franklyn Hernandez
came in for the last four outs and allowed a pair of walks.
Hunter allowed just four Leto
hits and gave up three walks. It was his second complete-game of the season,
the first being on Opening Night in a 4-1 victory over Lennard.
“I had to go after them. I
knew they were going to put the ball in play and hit it hard, so I just had to
throw strikes and let my defense do what they do best,” Hunter said.
That defense compiled eight
fly-ball outs and seven ground-ball outs on the afternoon to preserve the win.
“That defense is just spectacular,” Hunter said. “We work hard every single day and they do all of their routine plays and really
get after it.” 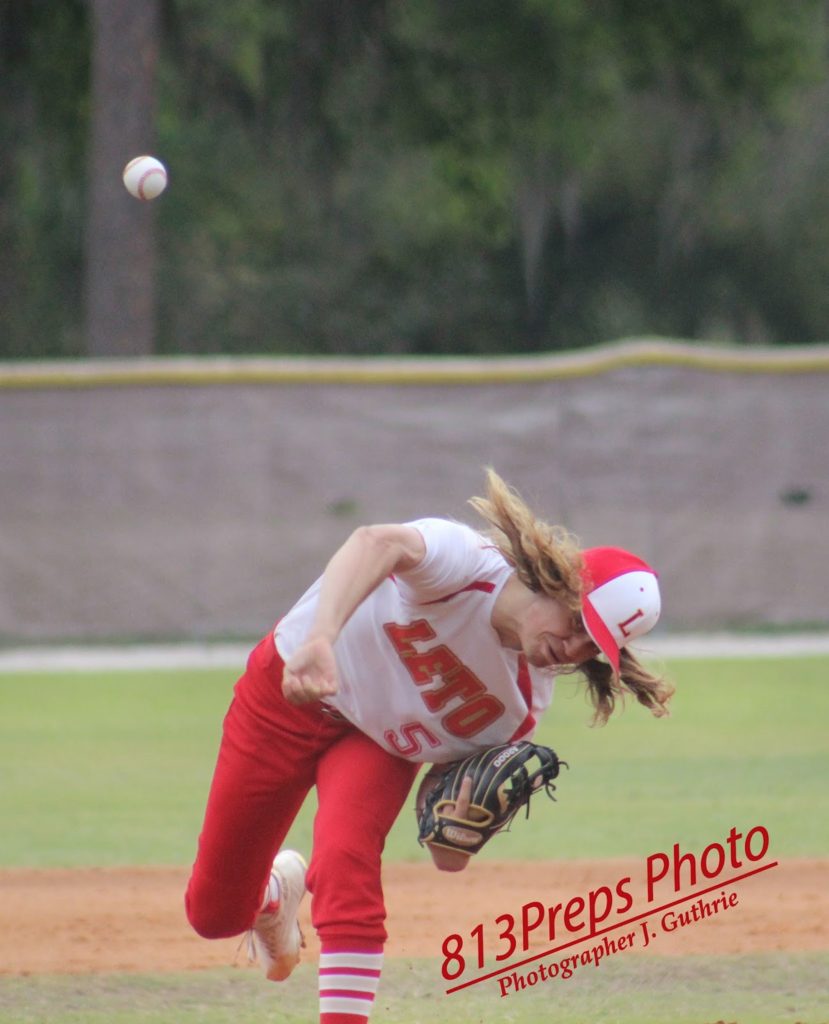 Offensively, the Bulls could
have put even more offense together, as there were several loud outs throughout
the afternoon.
“I think we need to understand
that the field we’re playing at this week is a little bit bigger than what
they’re used to,” Bloomingdale head coach Kris Wilkin said. “Although we’ve got
some pop in the lineup, it’s not necessarily going to play here at this field,
especially with some of the speedy outfielders we’re playing against.”
“We need to take our singles
and doubles in the gap and not worry so much about hitting balls off the fence
or over it.”
The Bulls will take on
Chamberlain on Monday for a matinee matchup with the Chiefs, who dropped their
first game of the tournament against Freedom on Saturday. Leto will try to
rebound against Freedom on Monday at 1 p.m.


– Will Turner is a student at USF majoring in mass communications, with a focus in news and editorial journalism, and a minor in history. You can follow Will on Twitter:@TBTurner813