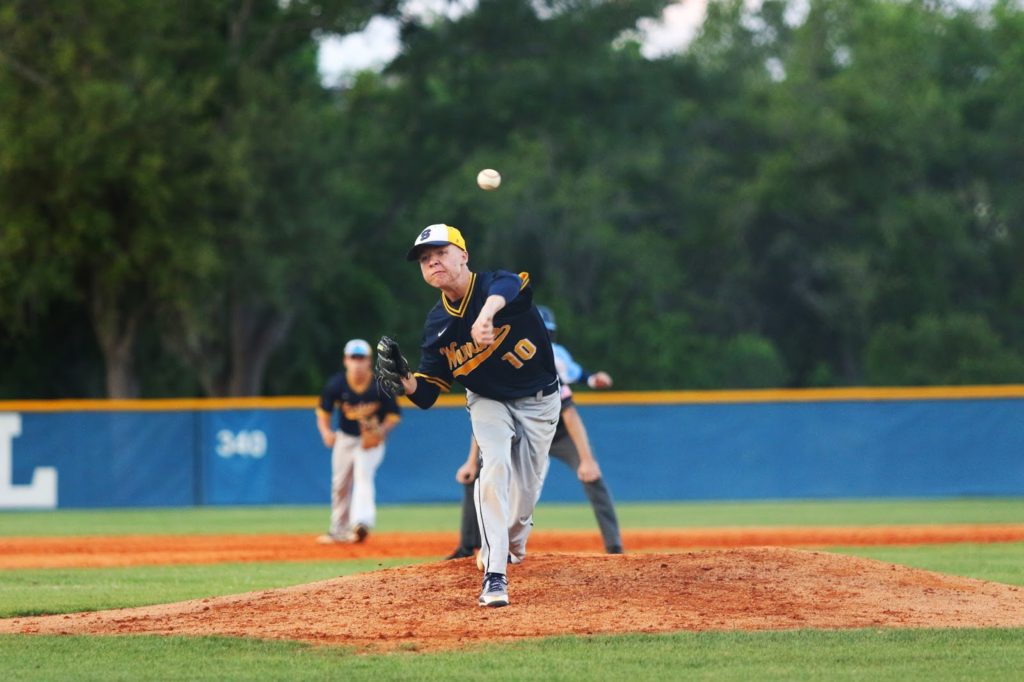 Steinbrenner senior Huston Richter earned the win on the mound, striking out seven as the Warriors topped Berkeley Prep.

By Will Turner
813Preps correspondent

TAMPA – At best, it’s been an up-and-down season for the Steinbrenner Warriors. Currently on one of those upward trends, the Warriors bounced back after a tough loss last week with a 5-3 victory over Berkeley Prep on Tuesday night to win their fourth game out of their last five contests.

Steinbrenner (12-10) relied on solid starting pitching down the stretch from St. Leo commit Huston Richter, who picked up his third win on the mound in 2018.

A lack of starting pitching would doom Berkeley Prep (15-9), as Ian Brown, who prior to Tuesday’s matchup was 6-0 with a 0.90 ERA, lasted just an inning for the Buccaneers. The sophomore allowed all three of Steinbrenner’s early runs before giving way to Bobby Christy in the second.

Jordan Lala advanced to third on a wild pitch and then scored on another wild pitch, giving the Warriors an early lead in the first. Daniel Delgado would lace an RBI double down the left field line in the second to score Jesse O’Rorke. A walk issued to Donovan Garcia would force Christy to come in.

Relief didn’t come right away for the Bucs as Christy bounced a ball in the dirt, allowing Delgado to come home and giving the Warriors a 3-0 lead.

Berkeley Prep fired back in the home half. The wild pitch bug would hit Richter, which allowed Tucker Fine to score after a leadoff walk. Carson Weekley labeled a ball to the right center field wall for a double, which scored Ryan Leavy and Connor Leach, tying the game at three.

From there, Richter would retire 11 of the last 14 he faced, as he peppered in seven strikeouts in his 5 2/3 innings pitched. He did walk five, and allowed four Buccaneer hits.

“That’s probably his highest strikeout total, but that’s also his highest walk total, so it’s just something that we’ve got to clean up,” said coach John Crumbley.

Noah Luke got a single into the outfield, scoring Lala. The Miami commit crossed the plate twice on Tuesday, pushing his run scored total to 19 on the year. He reached base four times, twice on errors and added a pair of stolen bases. He’d reach in the fifth on a second error at second base, getting Garcia to score.

“Coach put me in the leadoff spot, so it’s just my job to get on and get something going,” Lala said. “Always coming to the plate with a good approach, looking to square the ball up.”

Adam Fischel relieved Richter in the sixth and fired a near-perfect 1 1/3 innings to preserve the win for the Warriors.

“We made a couple of good plays behind the pitching with the double play in the first,” Crumbley said.

The Warriors used Tuesday night as a practice game in preparation for next week’s showdown district semifinal with Plant. The Warriors face Carrollwood Day on Thursday at Berkeley Prep.

“When Coach [Richie] Warren came over here, I asked him to start this tournament so we would have good competition in a two-game set,” Crumbley said. “We’ve got a CDS team to face. That’s what we want this week to be.”

– Will Turner is a student at USF majoring in mass communications, with a focus in news and editorial journalism, and a minor in history. You can follow Will on Twitter:@TBTurner813