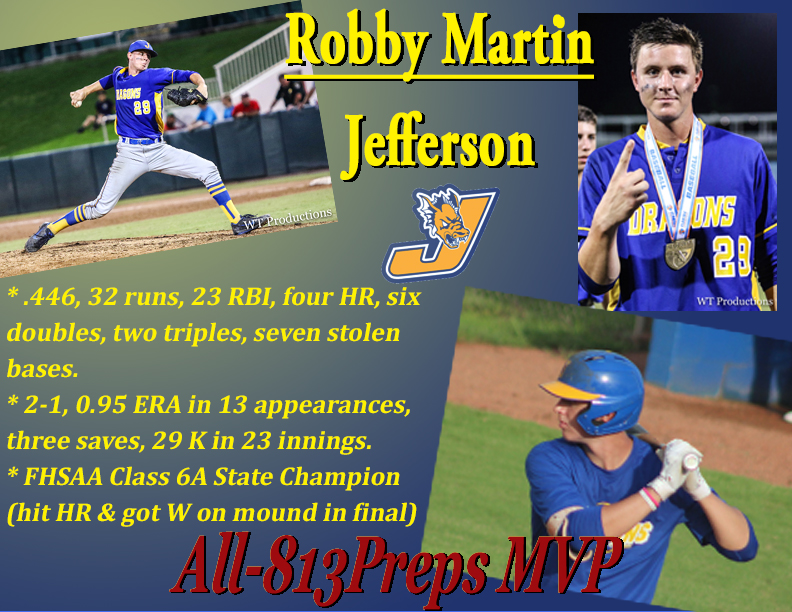 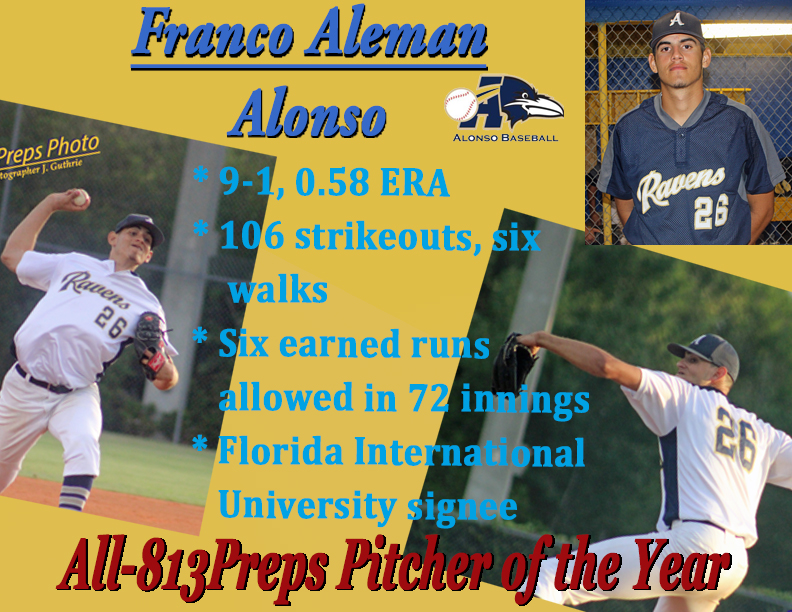 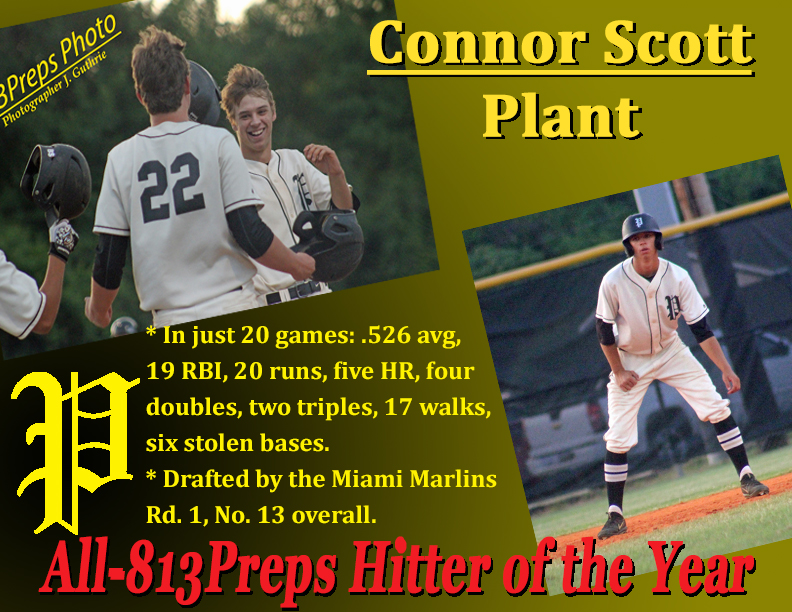 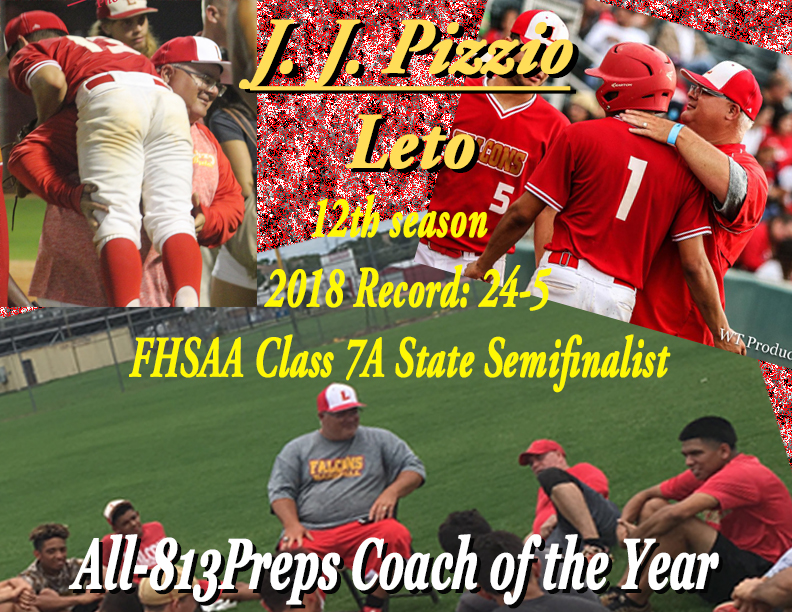 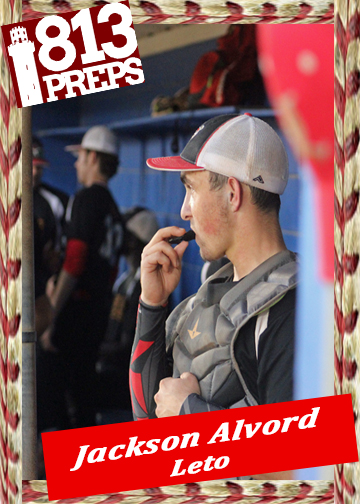 Jackson Alvord, C, Leto – The Falcons senior backstop hit .371, with 21 RBI, 19 runs scored, eight doubles, two triples and a home run, helping Leto to an undefeated district season, a district title, and its first region title since 1970. “Mr. Clutch” according to Falcons coach JJ Pizzio, including driving in the game-winner in the district championship. 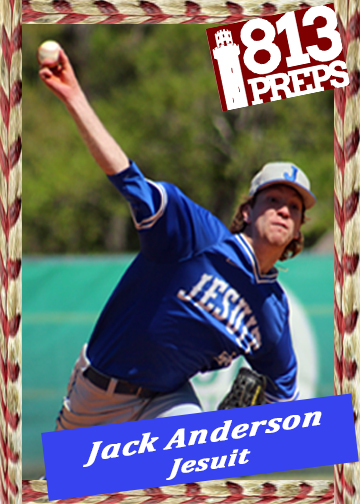 Jack Anderson, P, Jesuit – The Tigers senior righty posted a 5-2 record with one save in 55 1/3 innings of work this season. Anderson had a 1.26 ERA and 53 strikeouts in his senior season helping Jesuit to a district championship. In his career, the Florida State signee was 15-8 with a 0.91 ERA for Jesuit, which included an impressive 8-1 record and a 0.77 ERA in the postseason. 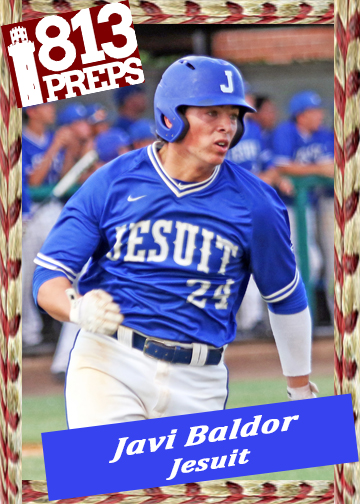 Javi Baldor, OF/P, Jesuit – With a team leading 36 hits, Baldor posted a .450 average, 26 runs, 24 RBI, with eight doubles and two triples for Jesuit this season. Coach Miguel Menendez said Baldor is a “throwback player” and “constant hustler,” always entering and leaving the field at a full sprint. He helped Jesuit to a district title and is signed to continue his playing career at Tallahassee Community College. 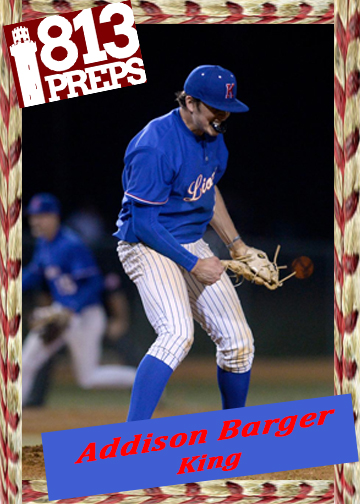 Addison Barger, SS, King – The Lions senior shortstop hit .354, with 30 runs scored and 22 RBI, with five doubles, four triples and a pair of home runs. Barger, who was drafted in the MLB First Year Players Draft by the Toronto Blue Jays in the sixth round (No. 176 overall), also had 13 stolen bases on the year. He helped King win the 2018 Saladino Tournament, where he was named tournament MVP. 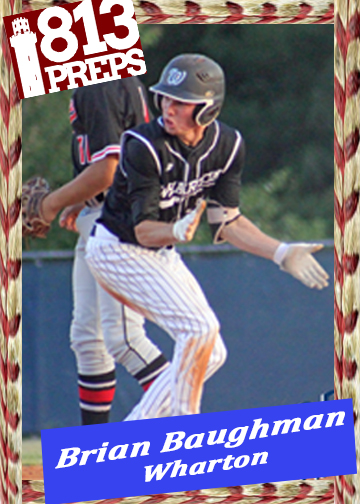 Brian Baughman, OF/P, Wharton – The Wildcats junior had a standout season across the board. He was excellent in center field with a .958 fielding percentage, and at the plate where he hit .398, with 26 runs, eight RBI, and four doubles. The lefty also was great on the mound going 6-3, with a 1.94 ERA and 60 strikeouts. 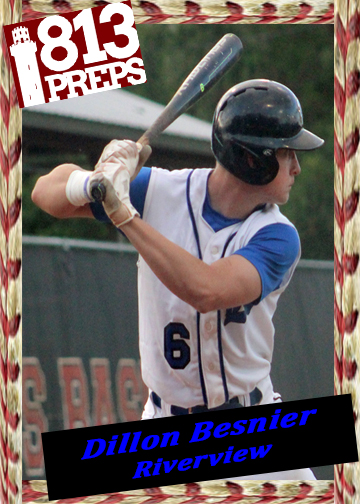 Dillon Besnier, OF, Riverview – The junior had a breakout junior season for the Sharks hitting .429, with 23 runs scored, 27 RBI, seven doubles and two triples. He led Hillsborough County with six home runs, and was a Saladino All-Tournament selection. Besnier is verbally committed to the University of South Florida. 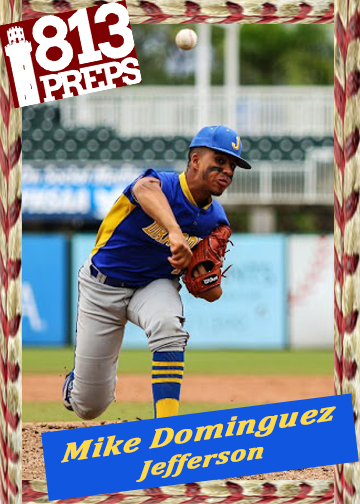 Mike Dominguez, P, Jefferson – The Dragons junior was outstanding all season, but liked it up a notch in the postseason. Dominguez finished the year 9-3 with a 1.26 ERA, 116 strikeouts for the FHSAA Class 6A state champions. In his final two starts he struck out 12 in each the region final win and state semifinal win, and had at least seven K’s in his final seven outings. 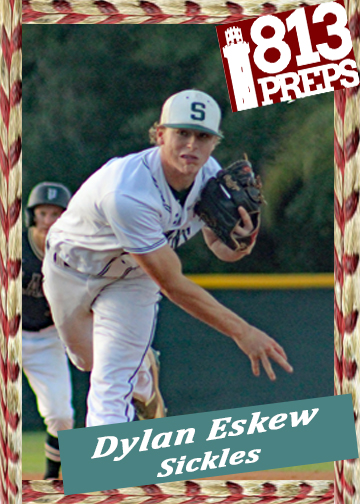 Dylan Eskew, P/IF, Sickles – The junior and University of Miami verbal commit helped Sickles to the most successful season in program history (22-5 record), including a first-ever district title. He was a force on the mound, going 9-2 with a 1.83 ERA and 85 strikeouts, and hit .465, with 29 RBI, 28 runs scored, six doubles, two triples, four homers and 12 stolen bases. Named the Saladino Tournament “Frank Permuy Best Hitter Award” winner. 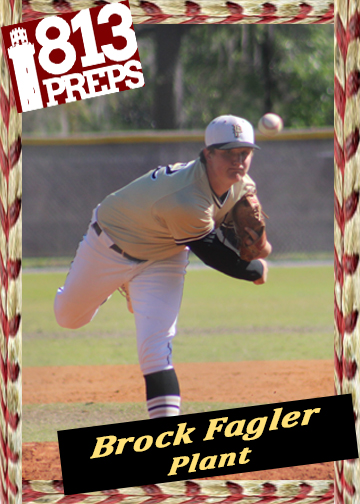 Brock Fagler, P/3B, Plant – Plant senior was excellent on the mound striking out 110, while going 6-3 with a 1.59 ERA, while walking just nine batters. At the plate, Fagler hit .365 with 25 RBI, 14 runs scored, seven doubles and four home runs. He was a Saladino All-Tournament selection and is signed to play at State College of Florida next year. 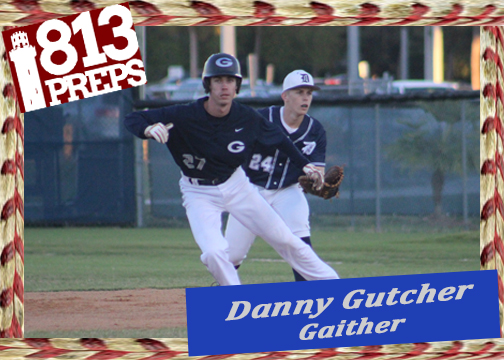 Danny Gutcher, C, Gaither – The Cowboys leader on the field hit .390 with 25 runs and 14 RBI, while having five doubles and five triples and 14 stolen bases. The Gaither catcher was named the Saladino Tournament “Pop Cuesta Best Defensive Player,” named to out All-813 Defend10 list, and is signed to play at the University of South Florida next year. 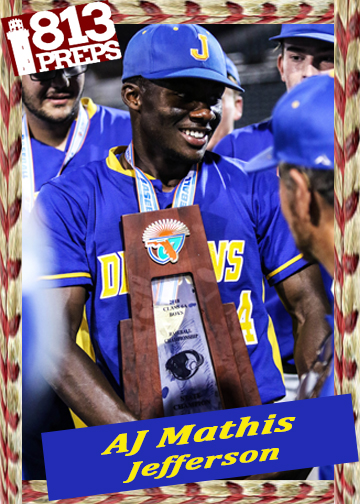 AJ Mathis, OF, Jefferson – The Dragons table-setter, Mathis led Hillsborough County in runs (43) and stolen bases (47), and was second only to teammate Robby Martin in hits with 40 on the season and a .449 batting average. From the leadoff spot Mathis had seven doubles, two triples, two home runs and 28 walks, while ending the season on a 15-game hitting streak and a Class 6A state title. He will continue his playing career next season at Florida State. 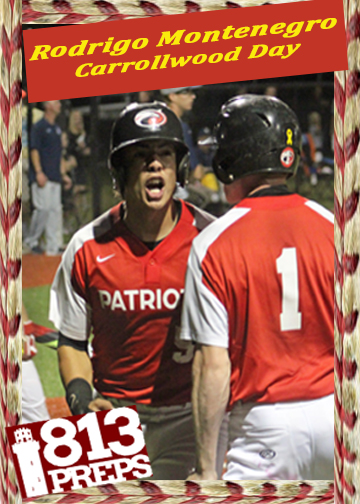 Rodrigo Montenegro, 3B, Carrollwood Day – The Patriots senior is a natural baseball player, who smoothly transitioned from catcher to third base. In his senior season he helped Carrollwood Day to 24-4 record, its first district and region titles and a Class 3A state semifinal appearances. Montenegro hit .366 on the season primarily from the leadoff spot, while scoring 31 times and driving in 10, with four doubles, two triples and 18 stolen bases. He is signed to play at St. Petersburg College. 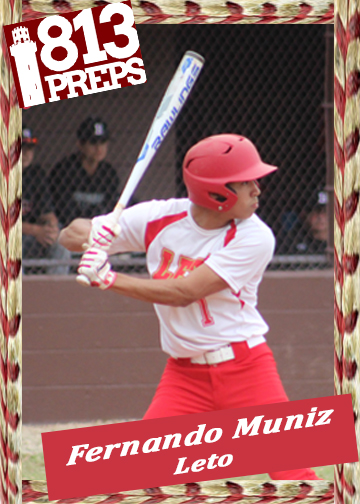 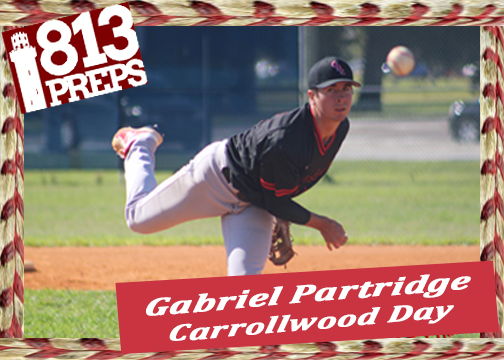 Gabriel Partridge, P, Carrollwood Day – The senior righty went 11-1 on the season with an 0.88 ERA and 88 strikeouts. His lone loss game in the Class 3A state semifinals, where he struck out 10 in a complete-game – one of five complete games on the year. He is signed to play next season at St. Petersburg College. 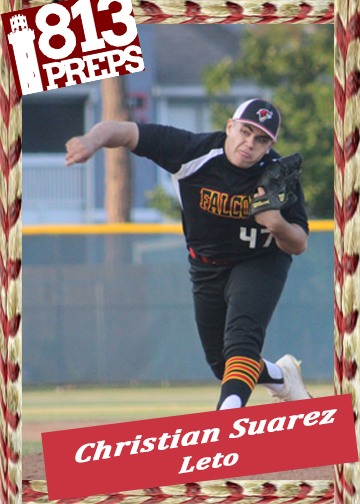 Christian Suarez, P, Leto – A phenomenal year for the Falcons junior right began with two mercy-rule shortened no-hitters, before things really took off and he finished the year 11-0 on the mound. Suarez struck out 73 and posted a 0.95 ERA for the district and region champions. 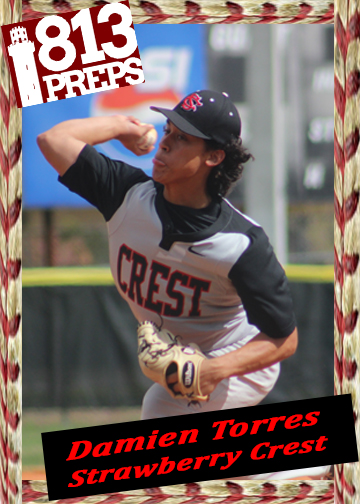 Damien Torres, 3B/P, Strawberry Crest – More “stopper” than closer, the Chargers senior transitioned from a starting pitcher to a reliever – often called upon in tough situations and answered impressively. On the mound he went 7-1, with 3 saves, a 1.14 ERA and 58 strikeouts. In his career, Torres won 20 games for Strawberry Crest. When not on the mound he was a solid defender at third base, and at the plate hit .374 with eight runs scored, nine RBI, five doubles, one triple and a home run. Torres is committed to HCC. 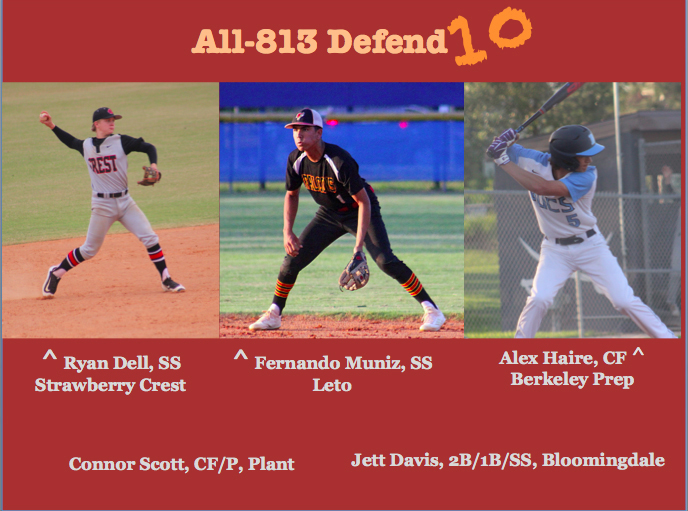 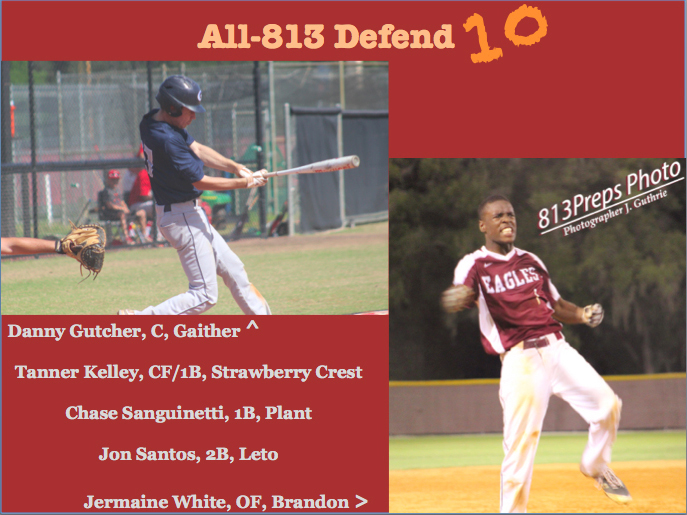 Editor’s note: The All-813 High School Baseball team was selected by editor Jarrett Guthrie, with input from 620WDAE’s Jay Recher. Regular and postseason play was considered, along with the public schools Western Conference selection and direct input from Hillsborough County area baseball coaches.


Unlike many independent news organizations, we haven’t put
up a subscription paywall – and we hope to be able to keep bringing you the great stories
from high school athletics in the 813 area free of charge. But we are still a small
business with just a handful of people involved, so there are costs including travel, equipment, and other costs associated with running this business.
We are looking for advertising partners, but we also need to count on our
readers for support. If everyone who reads our reporting, who likes it, helps
fund it, we will be able to continue covering these athletes’ endeavors.
Support 813Preps.com for as little as $1 by clicking “Donate” button below.