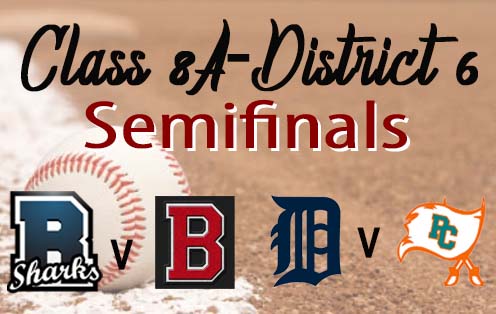 Catcher Brock Wilken has been clutch for the Bloomingdale Bulls all season long, at the plate and behind the dish. Wilken added to his home run total hitting his county-leading 11th homer in a 8A-District 6 semifinal win against Riverview. Wilken has hit the most home runs by a Hillsborough County player in a season in over a decade.

“I was just trying to do my job and get (Garrett) Borgen in from third, I wasn’t even looking for a home run, I was looking for maybe a ground ball to the right side or a fly ball to the outfield, something like that, and I just got a good pitch to hit and put a good swing on it,” said Wilken. “I feel really accomplished this year. I put a lot of stress on myself this year to kind of take over the whole team and see what I could do with that, and I feel pretty proud of myself for that.”

The Bulls won the game 5-0 behind Wilken’s two-run homer in the bottom of the third and a stellar pitching performance by ace Myles Caba, who threw a three-hit complete game shutout on just 75 pitches, striking out six and not walking a batter. The teams had split the regular season series and have met in the district tournament the last three seasons, with Riverview winning the 2017 district championship and Bloomingdale returning the favor last season.

Tuesday night’s win sets up a district championship showdown and rubber-match between the two top seeds, as No. 1 Plant City defeated Durant, 7-1 in the late district semifinal.

Wilken not only gave the Bulls some cushion, but he also called a great game behind the plate. He made the move from third base to catcher in the offseason, in essence, taking over a bigger role as a team leader. Bloomingdale Head Coach Kris Wilken, who is also Brock Wilken’s uncle, was a catcher for the University of Houston and a pro ballplayer in the Baltimore Orioles system.

“Everything was working well for Caba, he’s the man and our ace on the mound all day,” said Brock Wilken. “He goes out there with such intensity and such focus that when we go play for him it’s like we want to win the World Series for him every game. We love him for that.”

Kyle Merkle added to the lead with a sac fly to deep centerfield to make it 4-0 in the bottom of the fifth and Dominic Gonnella put the final fifth run on the board with a hard ground ball to the first baseman that scored DeJesus in the following inning.

That was enough for Caba, who pitched his best game of the season when it mattered most.

“I just wanted to go compete and win a ball game,” said Caba. “That’s pretty much my game, every time I’m on the mound I do my absolute best to give these guys a chance to win a game.”

The Bulls are looking forward to their matchup against Plant City in the championship game on Thursday night. The two teams split the regular season series with both teams winning on the road. Bloomingdale is the last team that beat Plant City back in March. The Raiders have won 12 in a row since then.

“It’s going to be a hard-fought game, a close game with a lot of good hitters, really good pitchers on the mound too. So, we’ll see how it works,” said Wilken.

The second matchup of the 8A-6 semifinal was never much in doubt, as Plant City took it to Durant, winning behind a complete game by FSU signee Parker Messick.

Durant drew first blood in the first inning on a Brendan Queen leadoff double to start the game. He was moved over on a ground ball to the right side by Ahmad Fitts. Arpod Zsold drove in the run with another ground ball.

Durant wouldn’t score another run though, because Messick was on a roll. He threw just 82 pitches in the complete game, while only giving up one run on two hits with one walk and six strikeouts.

Plant City answered in the bottom of the third with three runs of their own. With runners on first and second, a balk was called on pitcher Nathan Hood, who then gave up the lead on back-to-back wild pitches. The third run came on a double by Messick down the left field line.

The Raiders blew the game wide open in the bottom of the fourth, starting with a leadoff triple by Casey Mawhinney, who scored on the same play when the ball got away on the throw into the infield. Tyler Dowdy drove in the next two runs on a bases loaded double to make it 6-1. Jarod Wingo added the final run in the fifth with an RBI groundout.

That was more than enough for Messick. The Raiders will face Bloomingdale in the District championship on Thursday at 7 p.m.

– Nick Nahas is a freelance writer in eastern Hillsborough County and covers a wide range of topics. Be sure and follow Nick on Twitter by clicking here.