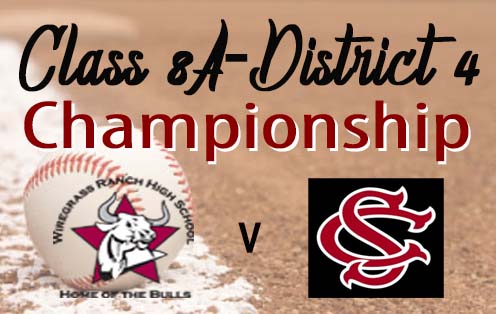 DOVER – Strawberry Crest has made a habit of getting the best of rival Wiregrass Ranch, but the victories never come easy. At least not until Thursday night.

Kade Manderscheid and a group of fellow seniors were never threatened while leading the host Chargers to an 8-0 triumph against the Bulls and a successful defense of their 2018 Class 8A-District 4 championship.

Crest produced all the offense it would need in the first inning. Tanner Kelley led off with a double, and Ryan Dell drove him in with a one-out single. Ben Pues and Manderscheid added base hits to make it 2-0.

Seven different players crossed the plate for the Chargers before they were finally held without a run in the fifth inning.

Left-handed starting pitcher Eli Garner picked up the victory, allowing only two singles before he was lifted on a pitch count with one down in the third. Manderscheid came in from center field to replace him and went the rest of the way without giving up a hit.

The right-hander was quick to pass the credit. “I’ve got the best defense in the world,” he said, citing several examples. “I just knew I had the team behind me the whole time.”

In back-to-back years, the Chargers have run off the Bulls in district tournament play to complete three-game sweeps of the season series. Thursday’s winning margin exceeded by one run the scoring edge of the other five victories combined.

“That team’s really good,” said Kelley, who finished 3-for-4 with a pair of doubles. “They always hang around, even late in the game. That’s when they usually make their comebacks.”

Both teams will advance to regional competition next Wednesday. Strawberry Crest will continue its bid for a second consecutive trip to the state tournament by hosting Lake Minneola. Wiregrass Ranch will visit Ocoee, a 7-6 victor against Lake Minneola in the 8A-3 title game.

The confidence level is skyrocketing for the reigning region champions, who toppled Freedom by the identical 8-0 score in Tuesday’s semifinal.

“The bats are really coming alive,” said Joey Parrillo, who scored twice and went 2-for-3 with a triple. “And it’s huge to go into regionals with momentum like that.”

@RyanDell13 Back to Back District Champs!! SCHS over Wiregrass Ranch 8-0 ⚾️ pic.twitter.com/ctVPDqBZR7