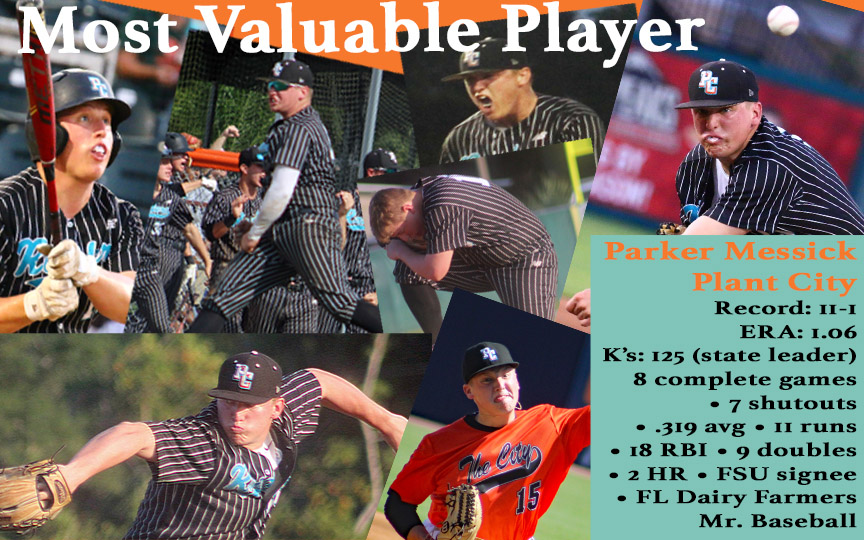 Most Valuable Player – Parker Messick – The lefty helped Plant City to a first-ever FHSAA Class 8A state championship, posting a 11-1 record with a 1.06 ERA. He also led the state with 125 strikeouts, with eight-straight complete games and seven shutouts to end the season, including in the region final win over Seminole and state semifinal win against Hollywood McArthur. Messick pitched 86 innings, walking just 18 hitters all season. He also played first base and offensively chipped in a .319 average, 11 runs, 18 RBI, nine doubles and two home runs. The Florida State signee was named Florida Dairy Farmer’s 2019 Mr. Baseball, and helped the Raiders win a school-record 30 games this season. He finishes his career at Plant City 21-10, with a 1.58 ERA on the mound and 263 career strikeouts. 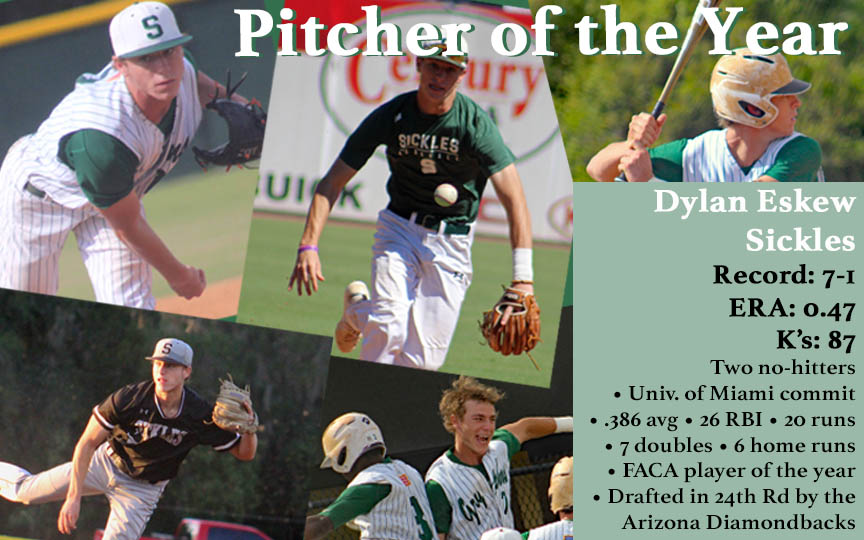 Pitcher of Year – Dylan Eskew, P/3B, Sickles – Eskew posted impressive offensive numbers this season hitting .386, with 20 runs, 26 RBI, seven doubles, and six home runs, while playing lights out defense at third base for the Gryphons. However, on the mound Eskew may have been even better. The Miami committed righty went 7-1 this season, starting the year off with a five-inning no-hitter against Robinson and ending the year with a no-hitter against Plant, only to fall victim to a 1-0 loss to the Panthers in that game. Eskew posted a 0.47 ERA, walking just 11 hitters in 59 innings and striking out 87. He was named Florida Athletic Coaches Association District 15 player of the year and was selected in the 24th round of the MLB first-year player draft by the Arizona Diamondbacks. 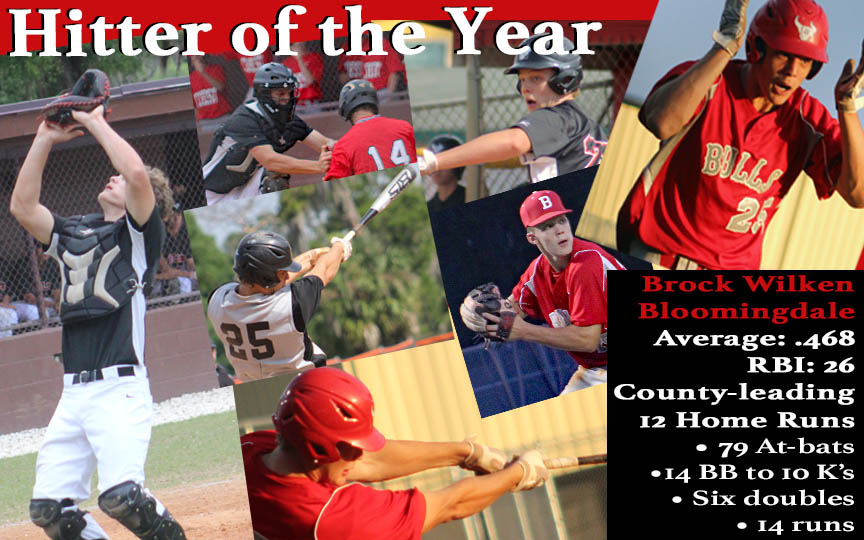 Hitter of Year – Brock Wilken, C, Bloomingdale – Hillsborough County’s home run king, Wilken belted a dozen dingers this season – the first time a player from the 813 hit double-digit homers in more than a decade. But that was just the start, the junior, Wake Forest commit hit .468 (37 hits), scoring 14 runs, 26 RBI, six doubles, and a triple to go along with the 12 HRs. He did all this while making the switch this season from third base to catcher. 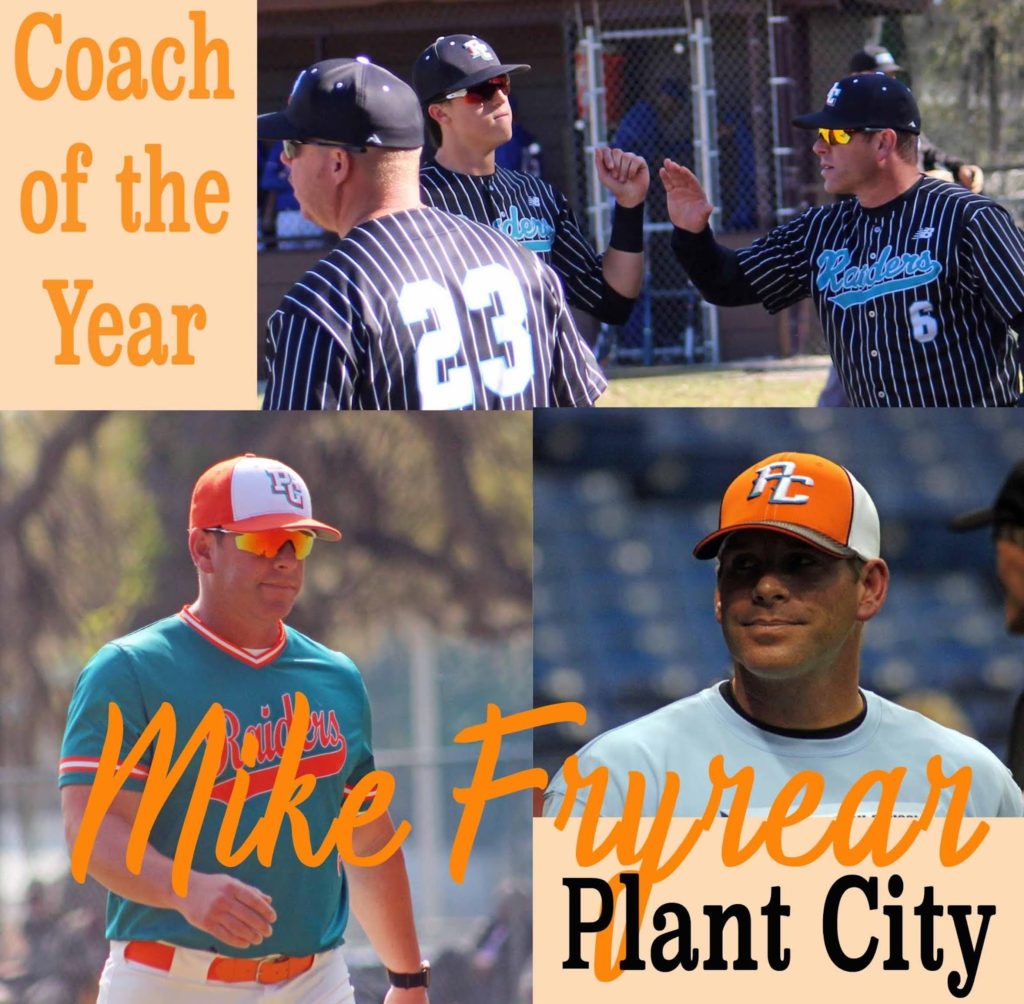 Coach of the Year – Plant City’s Mike Fryrear led his Raiders to a 30-win season, a program-first district title and the Class 8A state championship. In his seventh season as the head coach at Plant City, Fryrear reached the 100-win mark this season, was named Western Conference Federal Division Coach of the Year by his peers, and was named the 2019 Florida Dairy Farmer’s Coach of the Year. 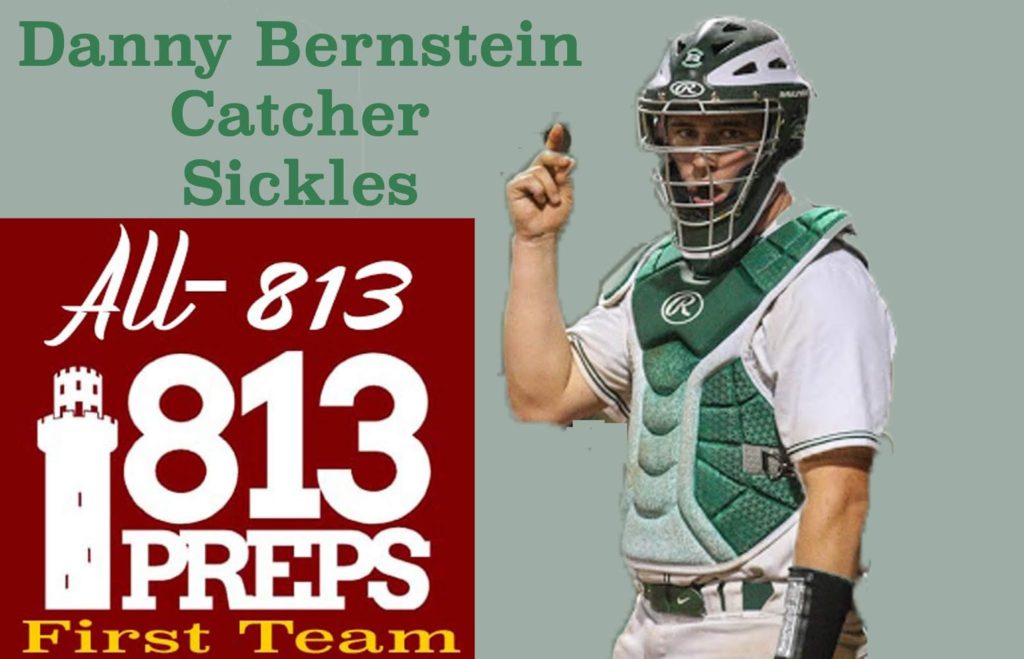 Danny Bernstein, C, Sickles – The Gryphons senior was a defensive wizard behind the plate and a masher at the plate hitting .359, scoring 10 runs, with a county-leading 30 RBI, adding eight doubles, a triple and four home runs; Tallahassee Community College signee. 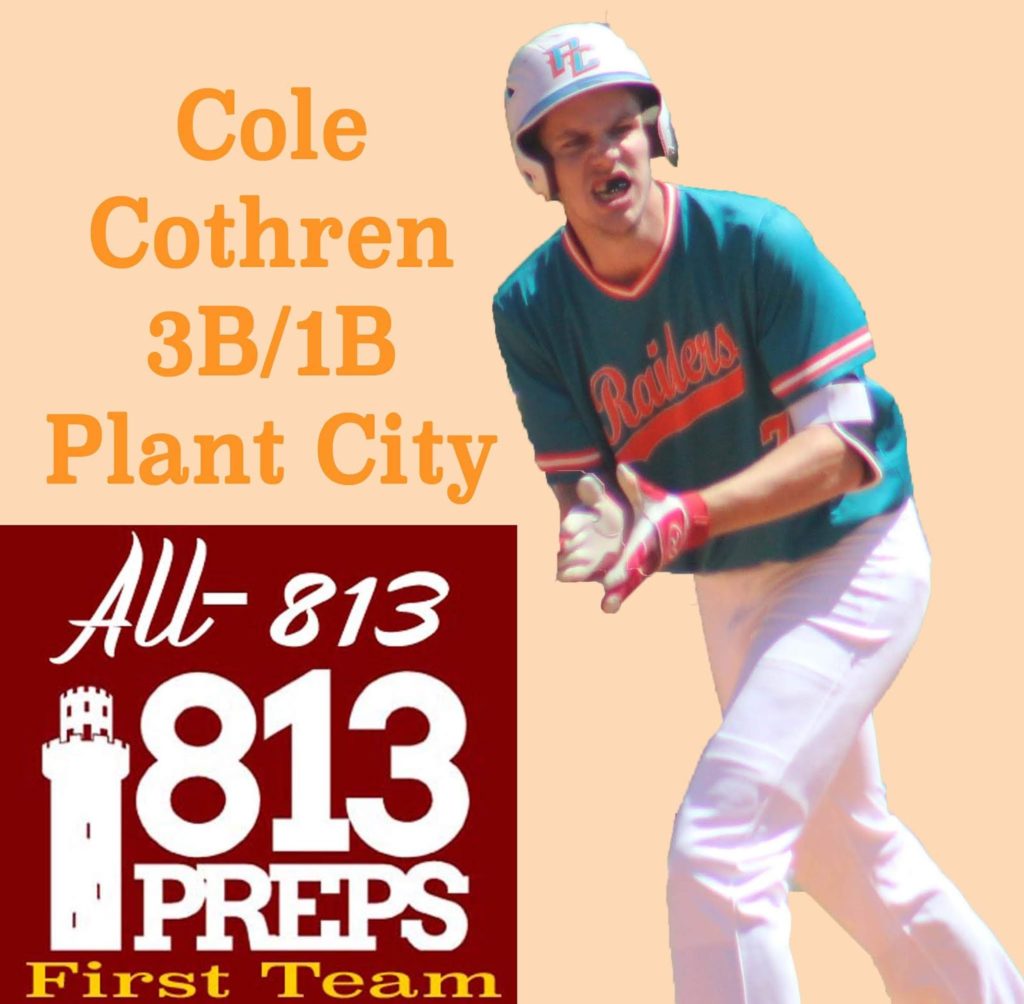 Cole Cothren, 3B/1B, Plant City – The junior led the county with 42 hits (a .467 average), scoring 23 times, driving in 20, with five doubles, helping the Raiders to a first-ever district and state championship. 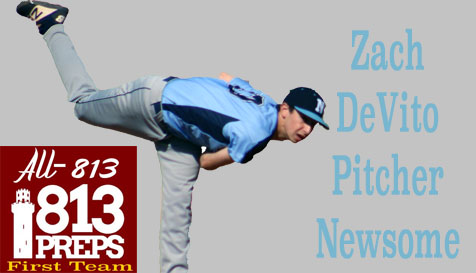 Zach DeVito, P, Newsome – The junior righty went 6-1 on the mound for the district champion Wolves, with a 1.09 ERA and 53 strikeouts in 51 1/3 innings this season. The Tulane commit earned the win in both of the Wolves district tournament games. 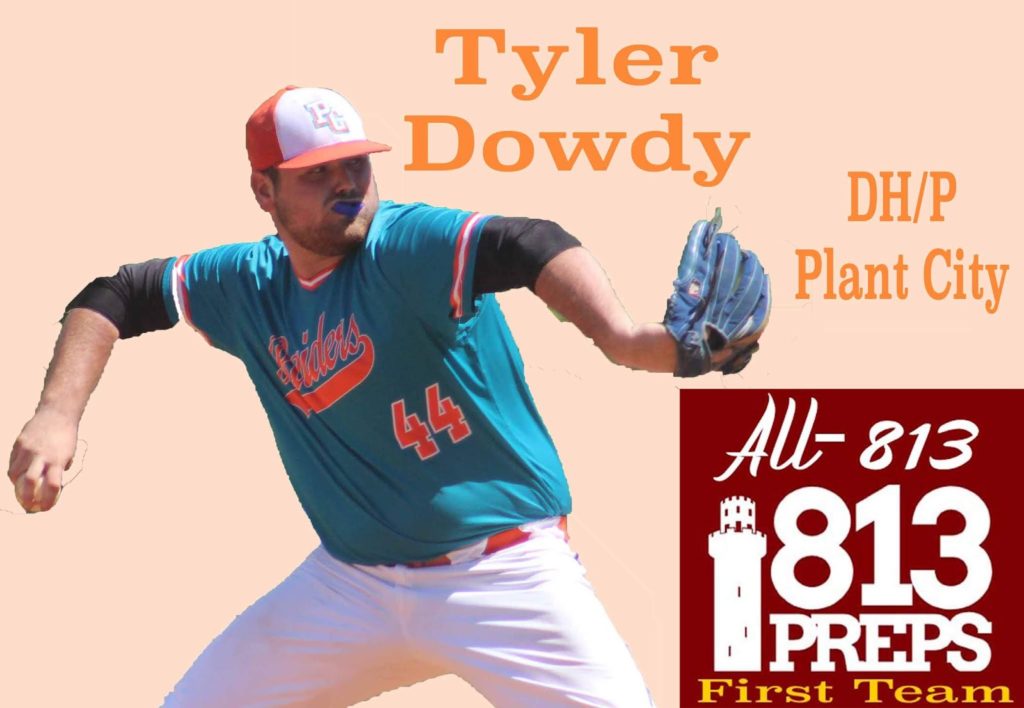 Tyler Dowdy, DH/P, Plant City – The burly righty had a big impact for the state champion Raiders hitting .368, with 11 runs scored, 24 RBI, nine doubles and six home runs – including the game-winner in the region final and two in the state semifinal; he also went 6-1 on the mound, with a 1.92 ERA and 57 strikeouts. 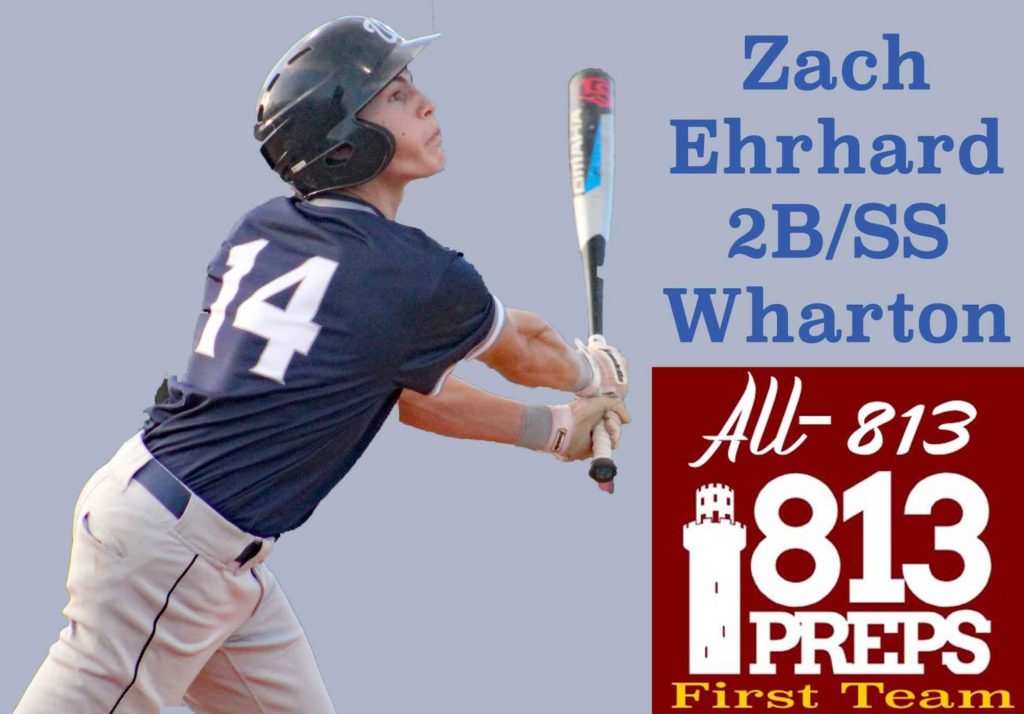 Zach Ehrhard, SS, Wharton – The sophomore middle infielder has a good glove and a live arm, but also brought it at the plate this season hitting .434 (33 hits), scoring 25 times, with 17RBI, five doubles, and stole 15 bases. 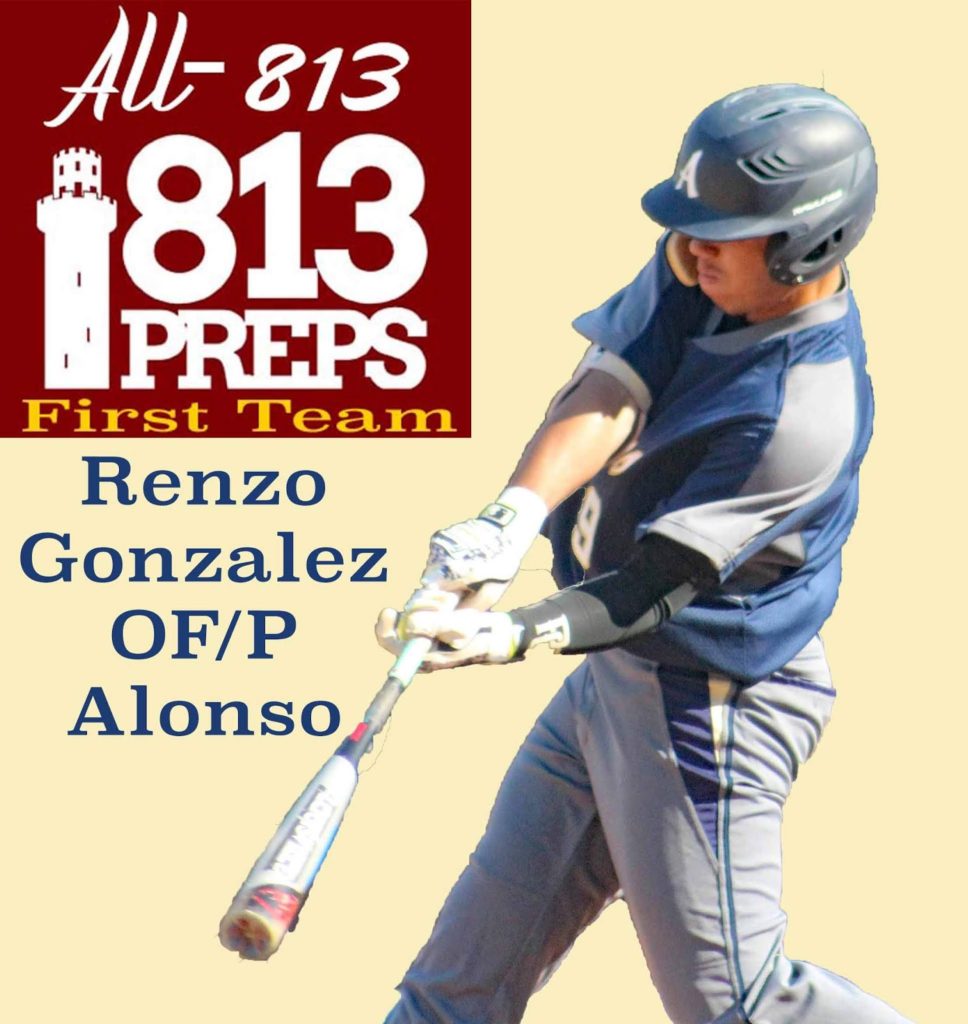 Renzo Gonzalez, OF, Alonso – The Ravens offense had a clear leader this season in the sophomore centerfielder and University of Miami verbal commit, who hit .376, scoring 28 runs, with 15 RBI, seven doubles, two triples and five home runs. 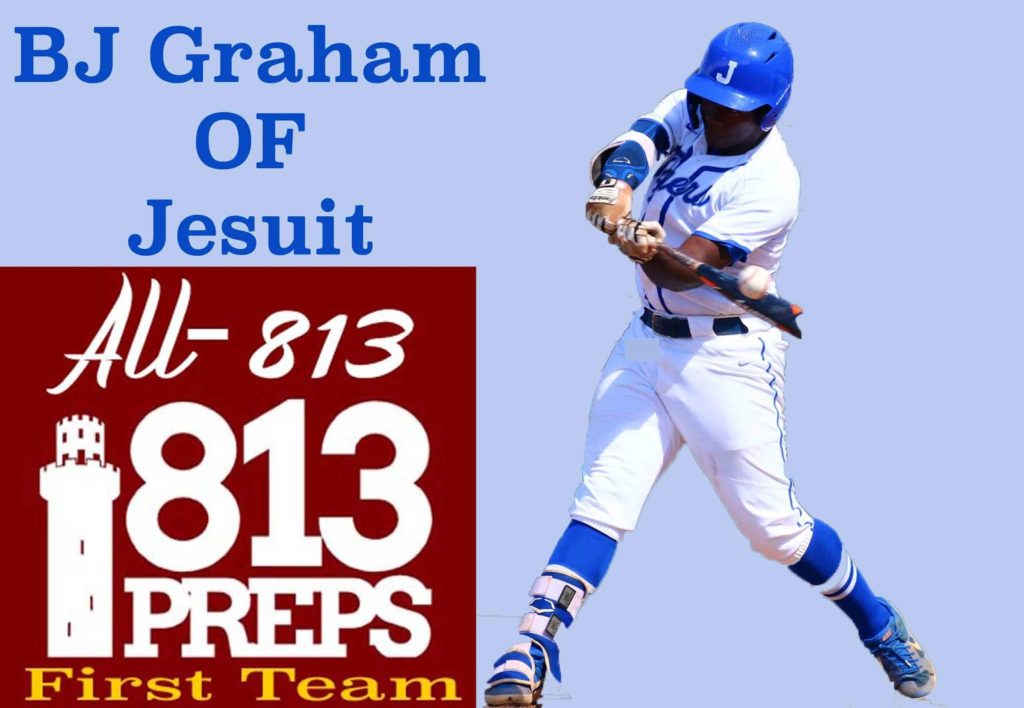 BJ Graham, OF, Jesuit – Hit .442 in his sophomore season to help lead Jesuit to the Class 6A state title, scoring 26 runs, driving in 18 on nine doubles, a triple and a home run. Graham also added 15 stolen bases and walked 17 times this season. 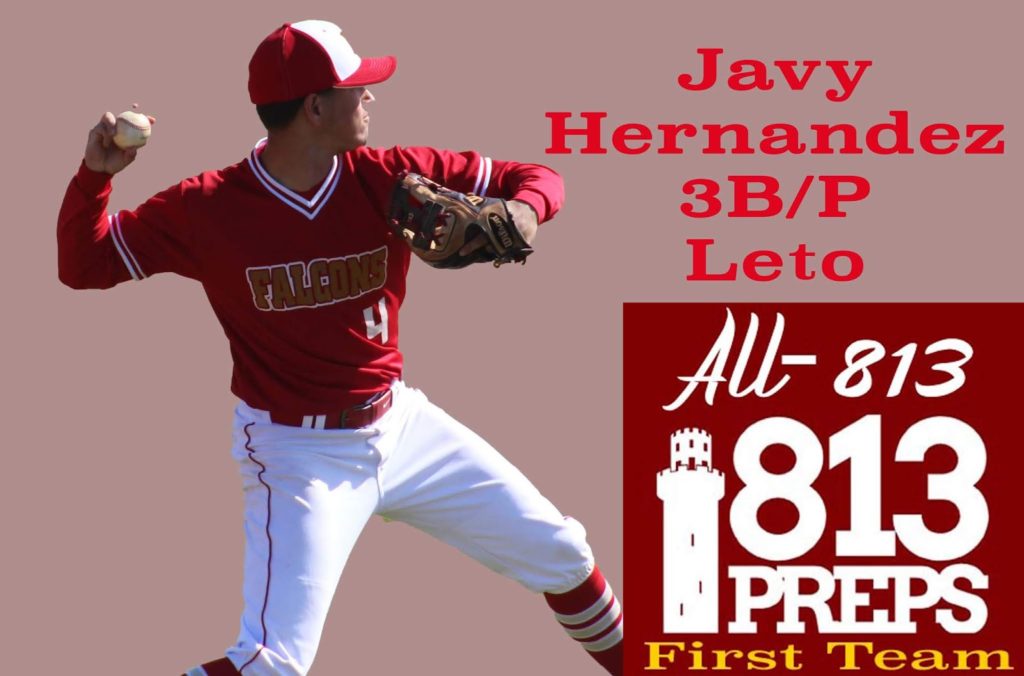 Javy Hernandez, 3B/P, Leto – The defensive captain at third base, he was also consistent at the plate for the district and region champion Falcons hitting .364, with 17 runs, 17 RBI, nine doubles and a home run, while stealing nine bases; the St. Pete College commit also stepped up on the mound tossing 28 innings, going 2-2 with a 2.75 ERA and 34 strikeouts. 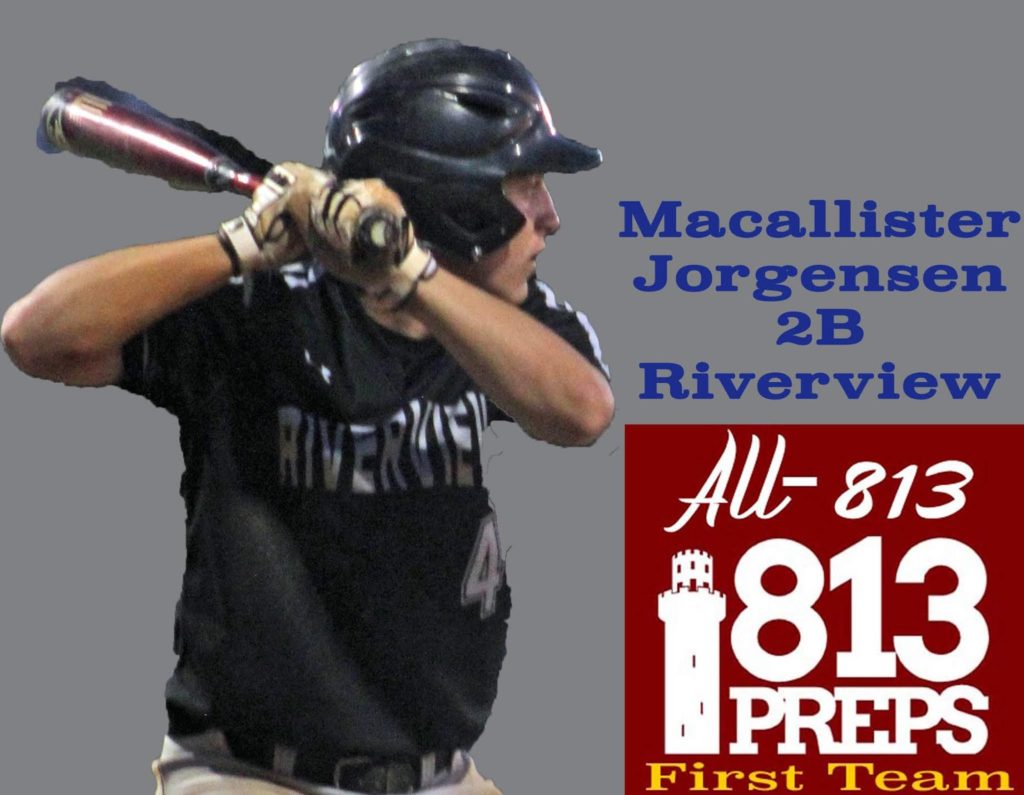 Macallister Jorgensen, 2B, Riverview – The Firestarter for the Sharks offense, Jorgensen scored 31 times this season, while hitting .400, with 18 RBI primarily from the top of the order, adding nine doubles, two triples, and a home run. 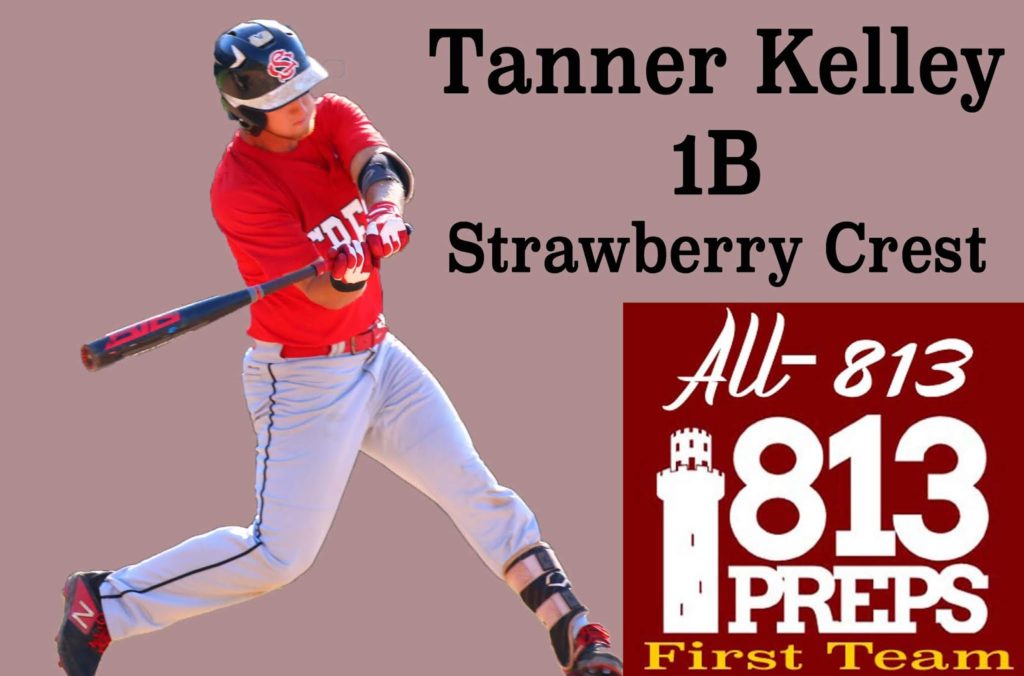 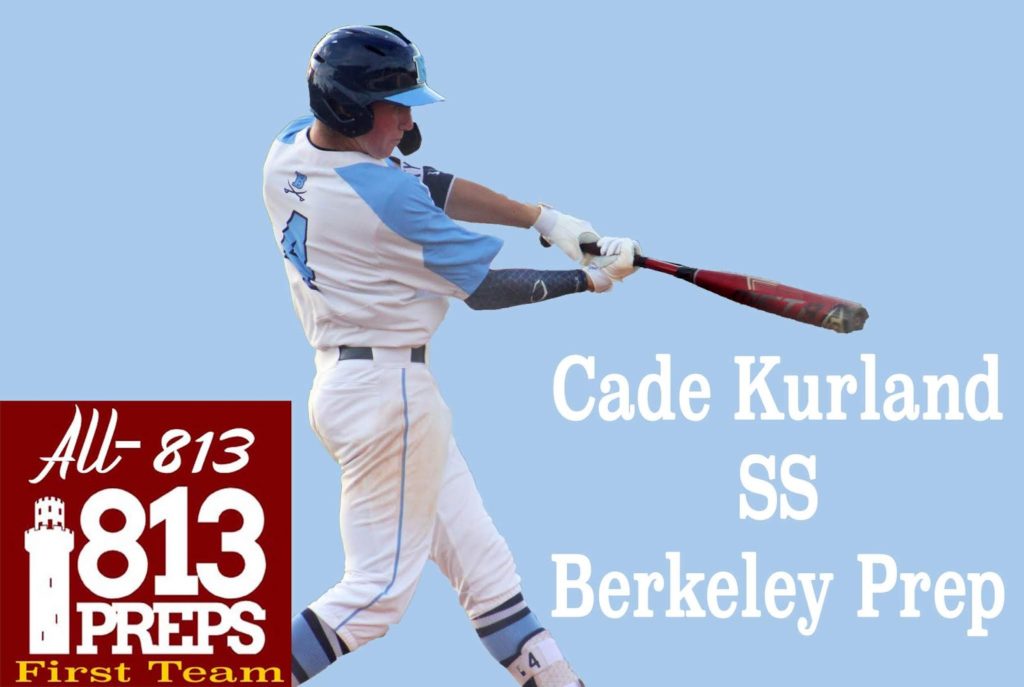 Cade Kurland, SS, Berkeley Prep – The Buccaneers shortstop is just an eighth grader, but in his second year at the varsity level led the region semifinalists with 26 runs, 22 RBI, eight doubles and three triples, while hitting .359 and stealing six bases. 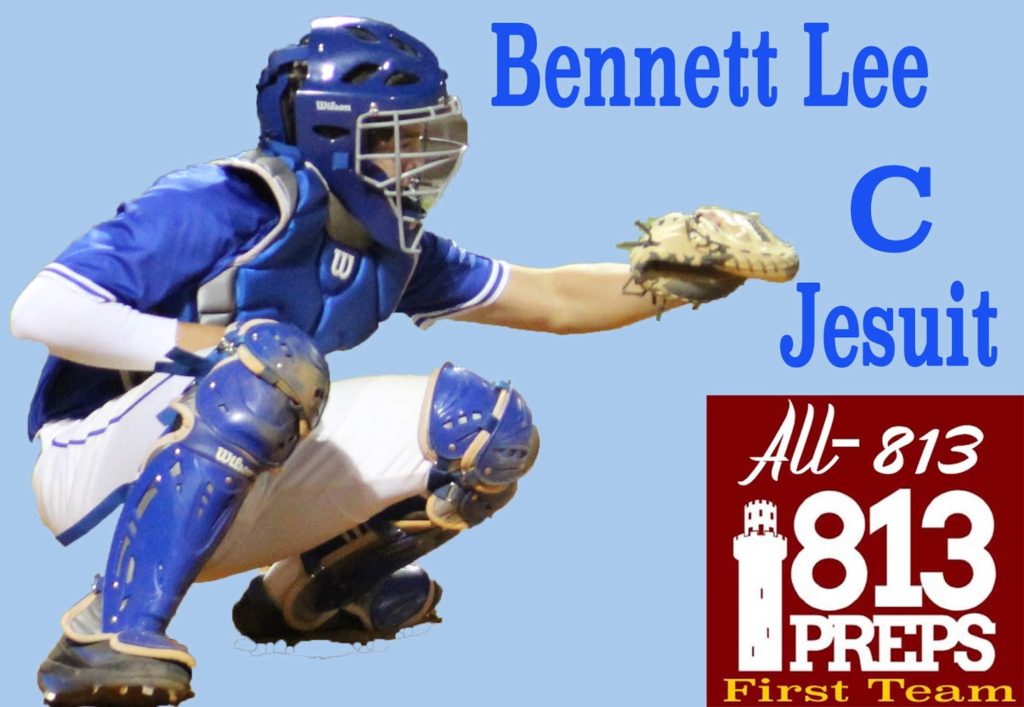 Bennett Lee, C, Jesuit – The Tigers junior led the county in doubles (12) and triples (7) and led his team with 38 hits and a .442 average – all while missing the final seven games due to injury. The Tulane commit also scored 18 runs and drove 19, with three homeruns. 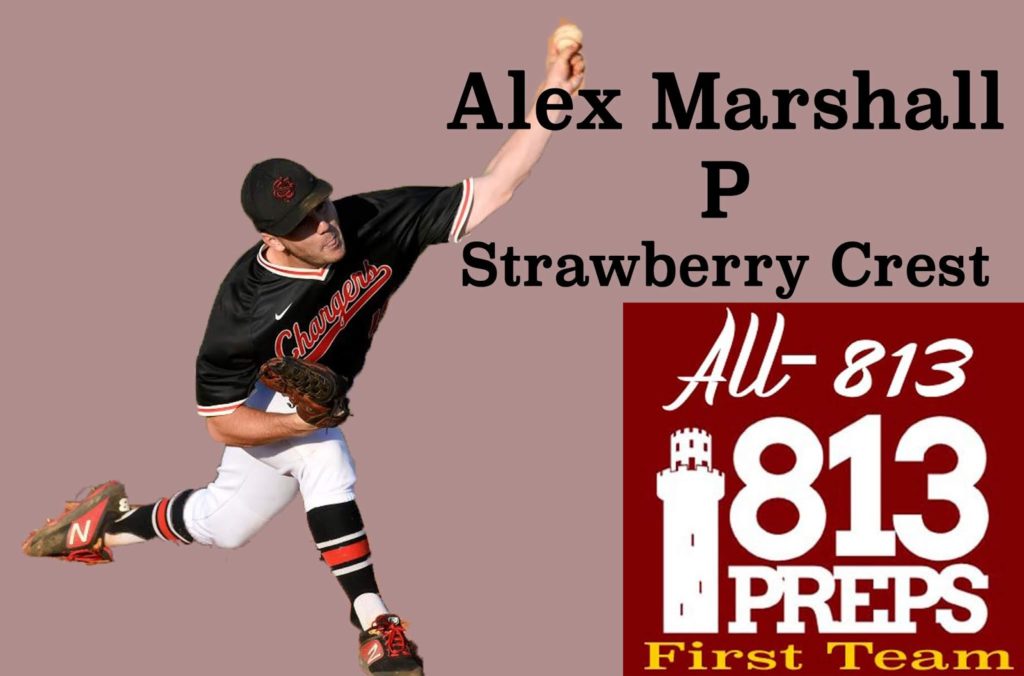 Alex Marshall, P, Strawberry Crest – The Chargers workhorse battled to an 8-4 record this season, with a 1.89 ERA and 72 strikeouts in 70 innings. The South Florida Community College signee pitched in Crest’s final five games going 3-0 in the post-season. 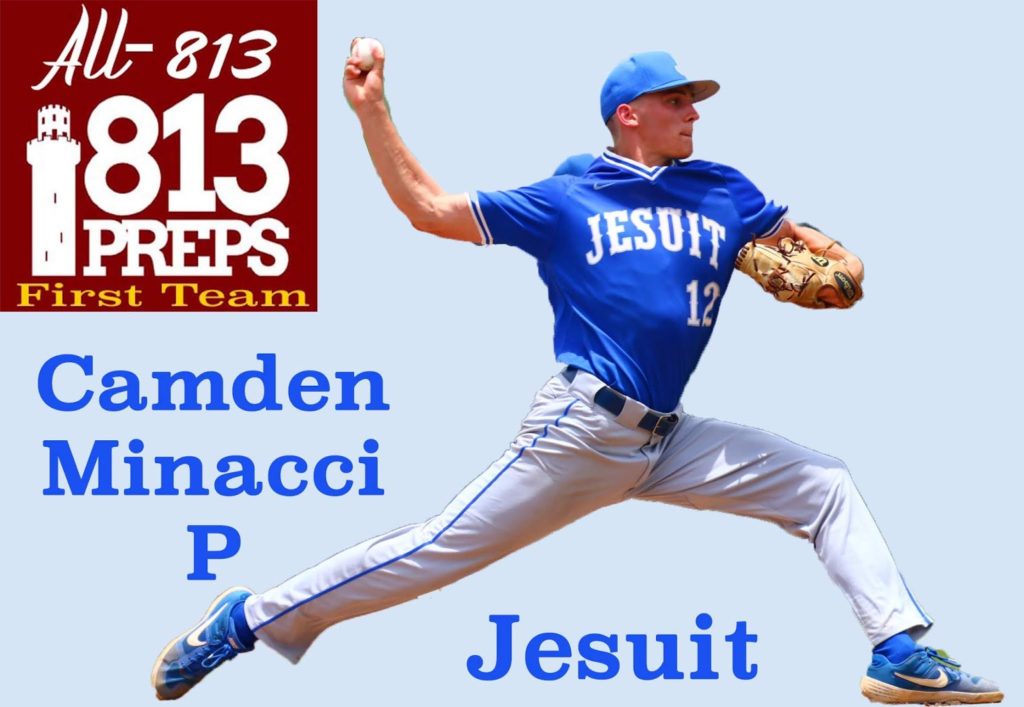 Camden Minacci, P, Jesuit – The junior righty was 12-1 on the mound this season with a 1.12 ERA and 85 K’s. The Wake Forest commit didn’t allow a run in his first eight starts, and wasn’t tagged with an earned run through his first 10 games. He was 5-0 in the post season for the state champion Tigers. 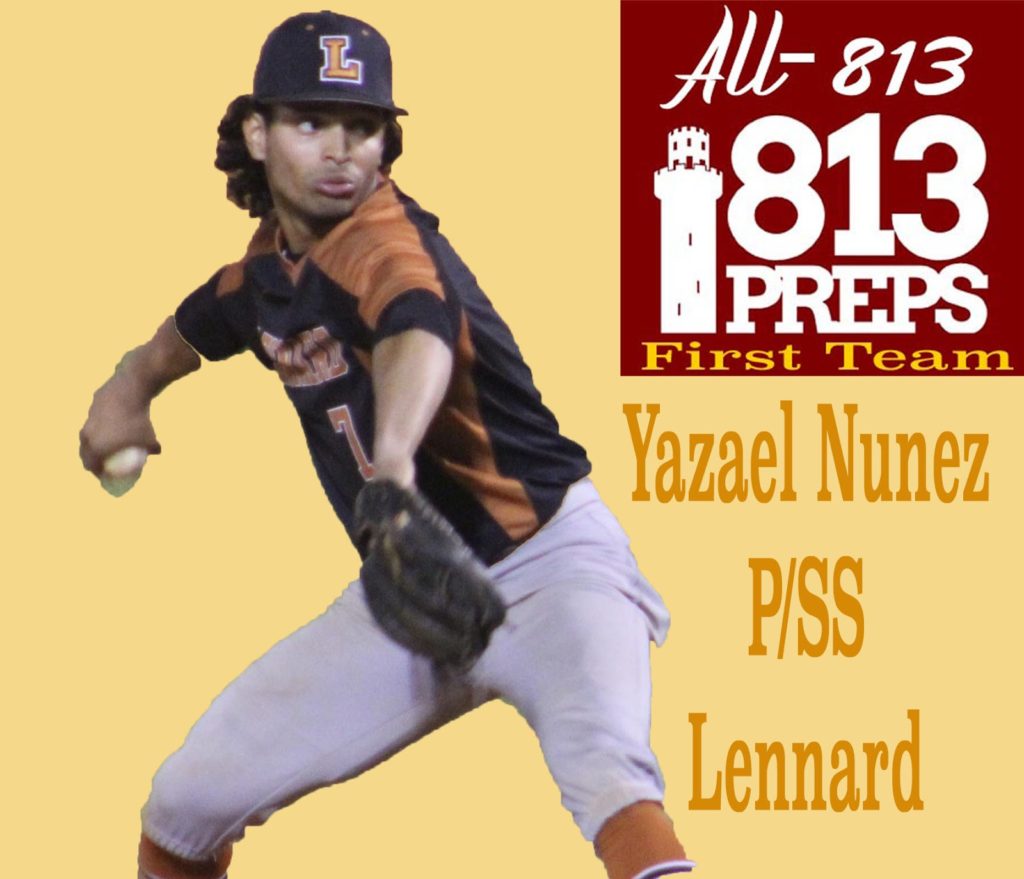 Yazael Nuñez, SS/P, Lennard – A strong defensive shortstop, Nuñez hit .296 for the Longhorns in a best-ever season for the program that saw 18 wins and a first-ever region playoff berth. The Saint Leo signee made his biggest mark though on the mound where he went 7-3, with an 0.83 ERA and 99 strikeouts in just 50 1/3 innings. 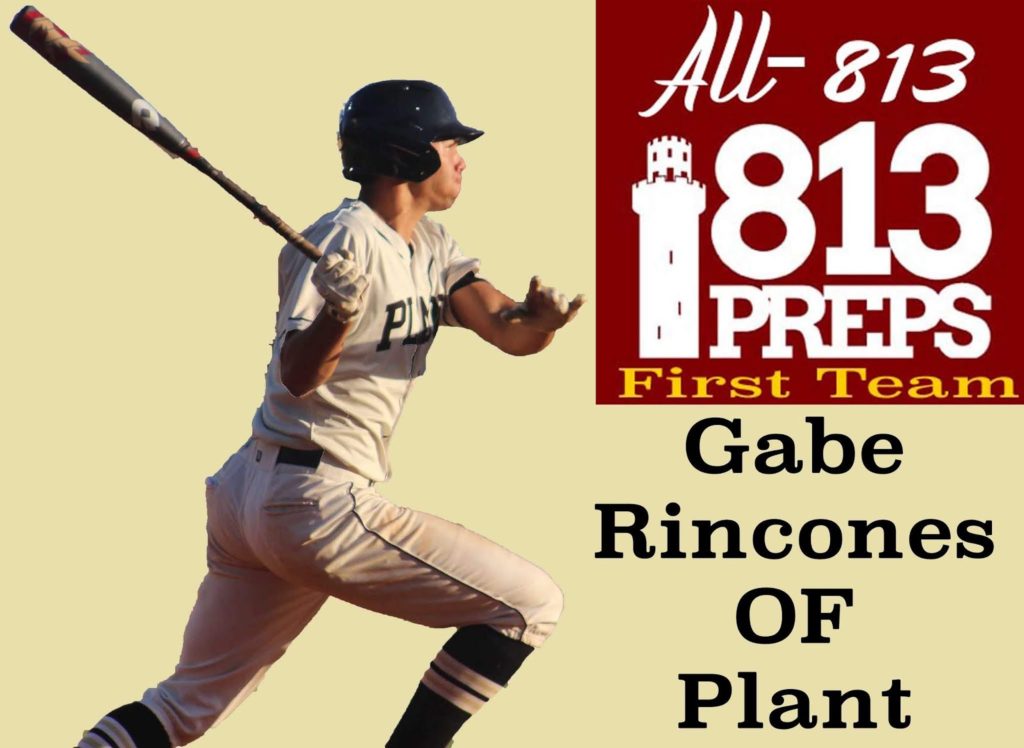 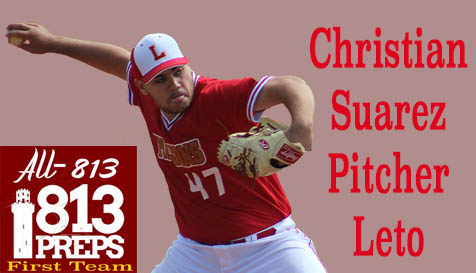 Christian Suarez, P, Leto – The Falcons senior righty was 9-4, with a 1.77 ERA, and was second in the county with 104 strikeouts in 14 appearances. The Stetson signee won 22 games over three seasons at Leto and helped the team to back-to-back state final four appearances, and two district and region titles. Named the Wade Boggs Award winner by Hillsborough Co. Athletics.