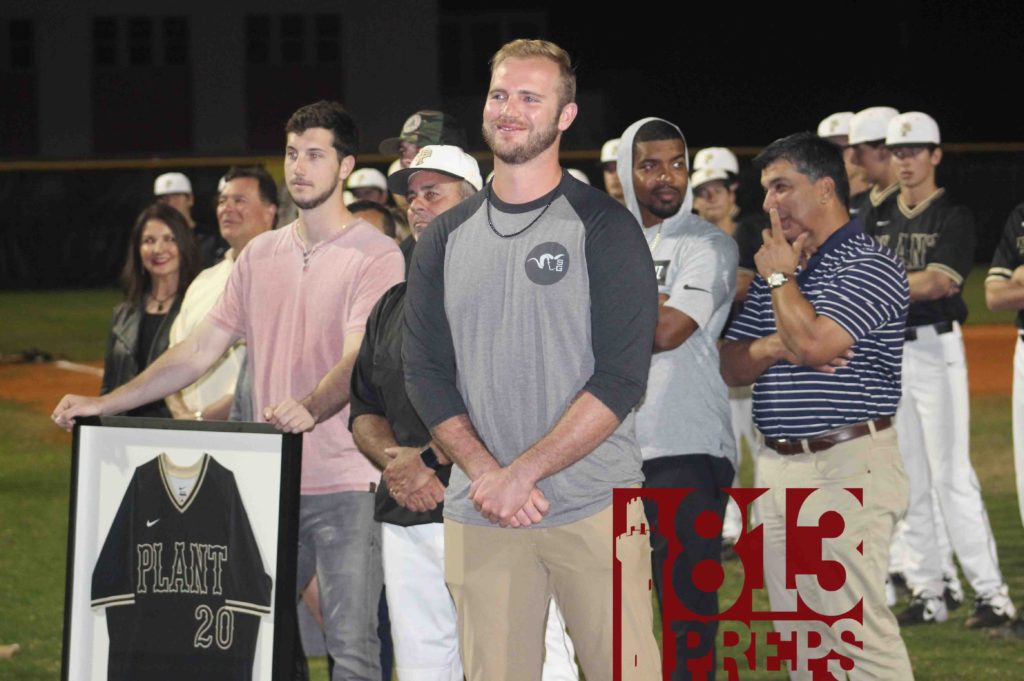 TAMPA – Plant High’s baseball program added another number to its retired jersey wall as the Panthers honored 2013 alum and 2019 National League Rookie of the Year Pete Alonso on Tuesday night. A whirlwind year for the 25-year-old starting first baseman for the New York Mets, which has seen him crush the rookie home run record by belting 53 round-trippers last season, earn a spot in the MLB all-star game, win the home run derby, and win the Jackie Robinson ROY award.

Big accomplishments for the slugger, nicknamed the Polar Bear, but that doesn’t mean Tuesday night’s celebration at his alma mater didn’t hold quite a bit of weight for Alonso.

“I spent a lot of time on this field and Plant High School means a lot to me,” Alonso said. “This is a very, very special event and I’m proud knowing I’ll always be a Plant Panther.” 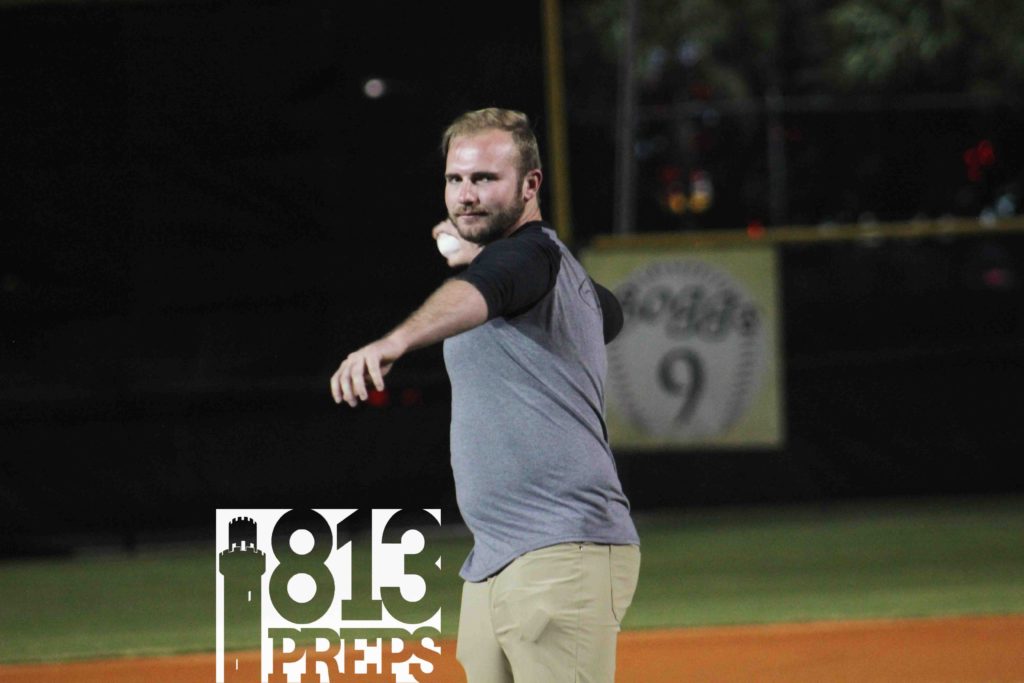 Veteran Panthers head coach Dennis Braun shared a long list of accomplishments with the folks in attendance introducing his former high school third baseman and admitted to being a bit emotional in the homecoming.

“It’s an emotional night for me,” Braun said. “We see all the hard work, all the doubters, when he battled injuries, the outside fan gets to see the greatness, but knowing how much goes into what Pete has accomplished really makes you proud to have been a part of it.” 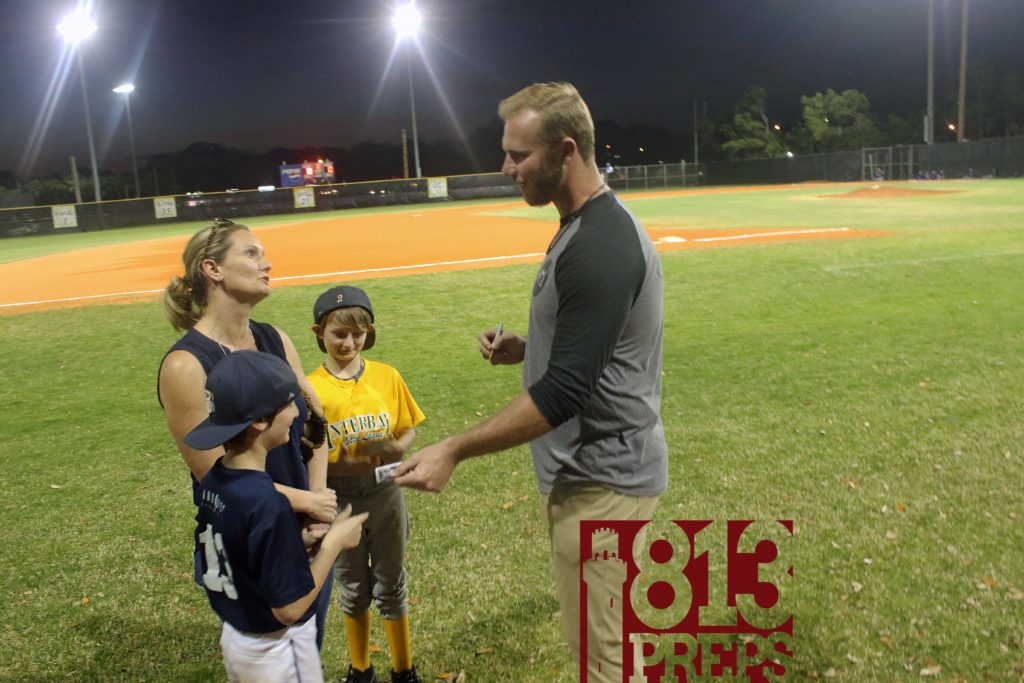 Twins Alex and Nathan Adkins, along with their mother Jennifer were treated to some autographs from Alonso prior to the ceremony (J. Guthrie, 813Preps).

Prior to the on-field ceremony, Alonso was greeted by friends, former Plant teammates and even a few young players, for whom he graciously signed autographs and posed for photos.

Asked if he ever gets tired of signing, Alonso said he’s always happy to greet his young fans.

“It’s awesome,” Alonso said. “You never know what kid you can impact, and it looks like some of them were coming from Little League practice. The whole point is they are the ones who grow up loving the game and will be the next generation of players.”

“I’m not going to be playing 40 years from now … so growing the sport, having a positive effect on kids, that’s what it is all about.” 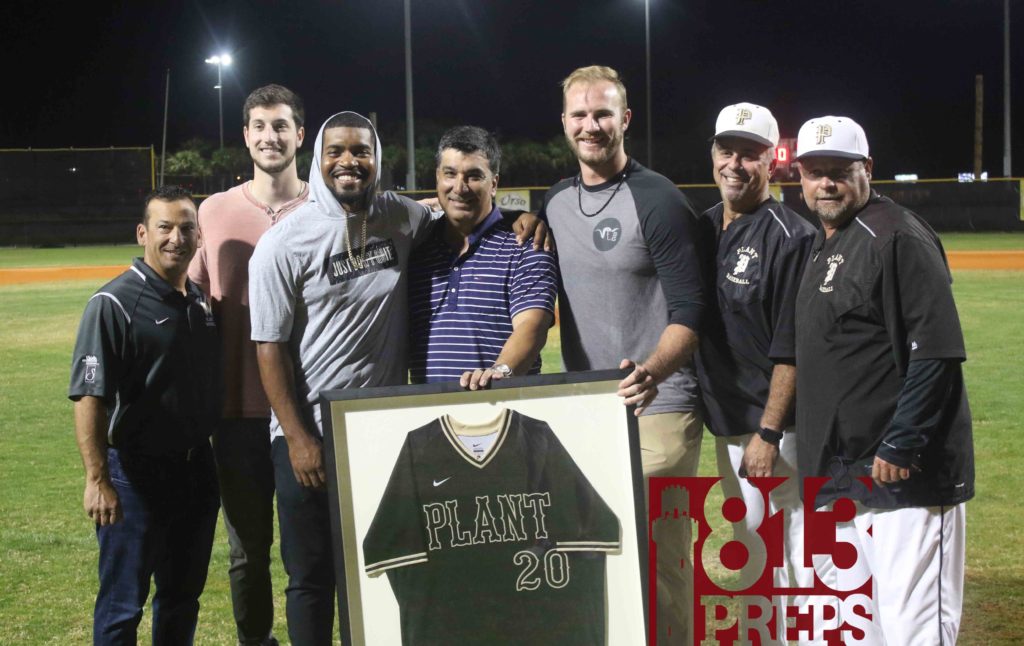 Givens said that the strong traditions at Plant, which includes six players within the last 12 years reaching the Major Leagues, as well as current minor league prospects like 2018 Miami Marlins first-round selection Connor Scott (who was in attendance) and 2015 first-round Cardinals selection Jake Woodford, is something he was very happy to be able to celebrate.

“The tradition is what is great about this program,” Givens said. “We are here to celebrate Pete Alonso, he hit 50 home runs and was rookie of the year. That is a special thing for all of us from (Plant).” 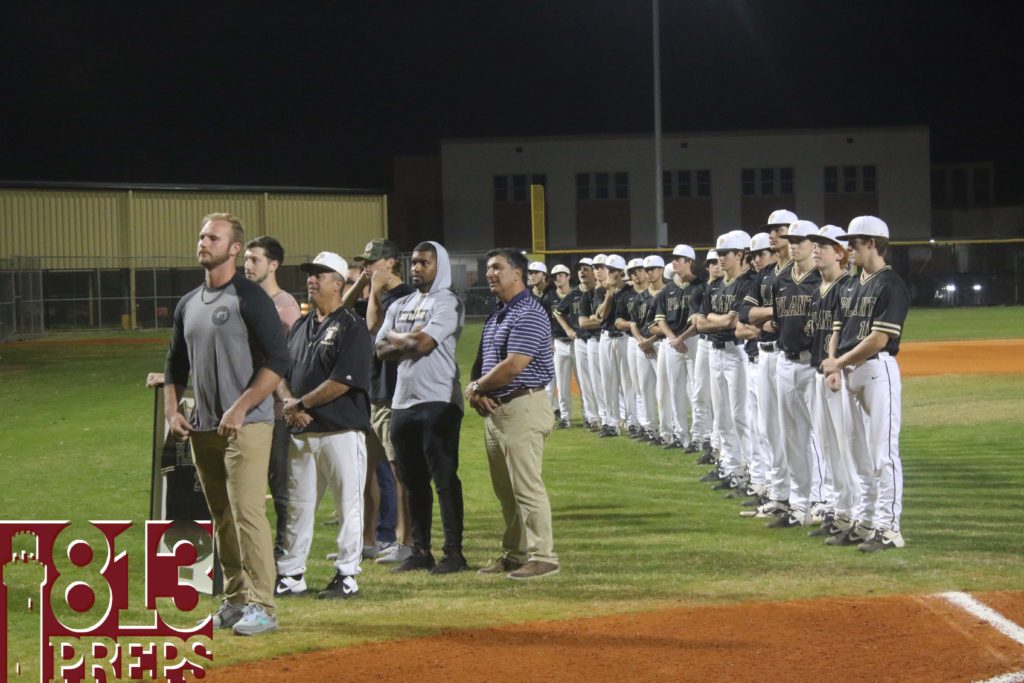 The 2020 Plant Panthers watch as Alonso is introduced to the crowd (J. Guthrie, 813Preps).

Alonso credited Braun for making a big impact on his career, and after the ceremony the Alonso family presented the Panthers head coach with a plaque from the Mets series he attended where his former player hit home runs 51 and 52 last season.

“I still take things that Braun instilled in me and use them,” Alonso said. “Every coach has lessons he wants his players to take with me and Coach Braun demanded the best out of me, wanted me to compete every day and every day I play baseball that is still my goal.”

For Braun, who has been lucky to retire six players numbers during his 16 years at Plant, having a night like Tuesday is special not only for the history of the program, but also for its future.

“I think nights like this buy us some trust,” Braun said. “Our current players see these guys come back for nights like this, they come back to practices and to take BP. My line with our guys is, ‘this is what we are looking for,’ and having all the guys who have come back for this and other nights our guys get to hear it from those guys and not just us as coaches. It’s special.”