Good luck with your seasons. 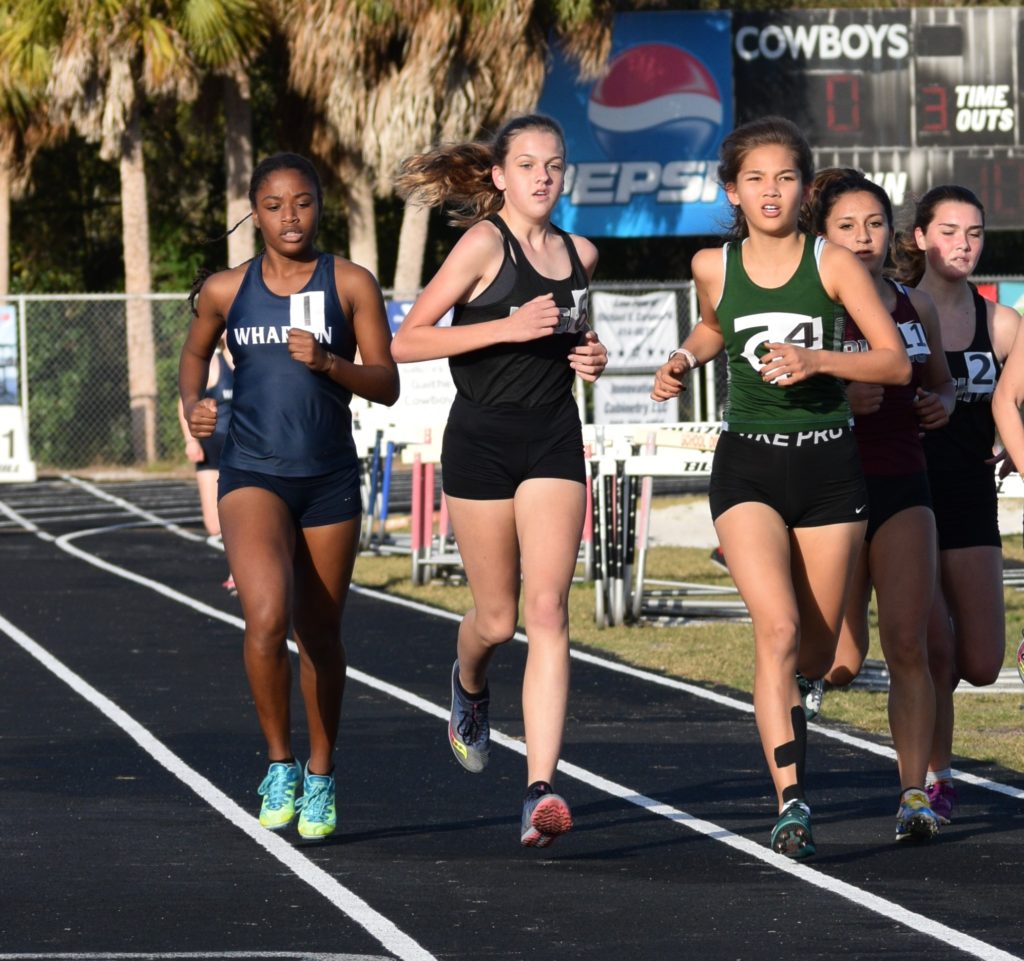 Our track and field coverage for the 2020 season kicks off this week. We would like to thank photographer Don Howard for allowing us to use his great work from the Henry Strapp Memorial.

The first official week of the 2020 track and field season is in the books, and it has already seen numerous Hillsborough County teams and athletes post some fast times, as several athletes have already shot to the top of the state leaderboard.

Here are some highlights from three big area events:

TAMPA – Wharton and Hillsborough have had some fierce battles on the track over the years, Saturday at the Henry Strapp Memorial Invite added to that tradition. Hillsborough brought some big-time firepower to the event hosted at Gaither, but it was Wharton’s depth that allowed the Wildcats to prevail in both the boys and girls team competitions.

Hillsborough sophomore Erriyon Knighton led the Terriers’ charge and has very quickly planted himself at the top of the 3A state leaderboards. Knighton began his day winning the 100-meter dash in a time of 10.89, which has him fourth in the state for 3A. He also ran a leg on the 4 x 100 and won the 200 with a time of 21.77. His 200-meter time would be good enough for first in the state, except Knighton ran 21.26 earlier in the week at Spoto. 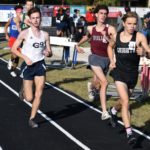 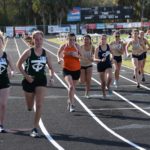 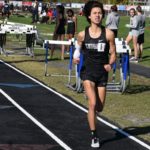 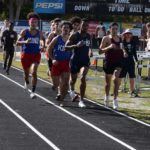 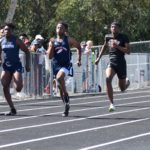 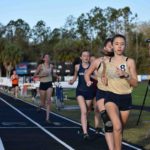 All photos from the Henry Strapp Memorial provided by Don Howard.

However, it was Knighton’s performance in the 400 that drew attention. He turned in a time of 47.55  for his trek around the oval, which was Knighton’s first time running the open 400 (though he has been part of 4 X 4’s). This performance also put him on the top of the 3A state leaderboard. In fact, only two boys from class 3A ran faster than 47.55 all of last season.

“I was just trying to establish myself and have a good race,” Knighton said. “Running a 47 was a surprise for this early in the season.”

“The sky is the limit for this young man and he really doesn’t know how good he could be,” said Hillsborough coach Joe Sipp. 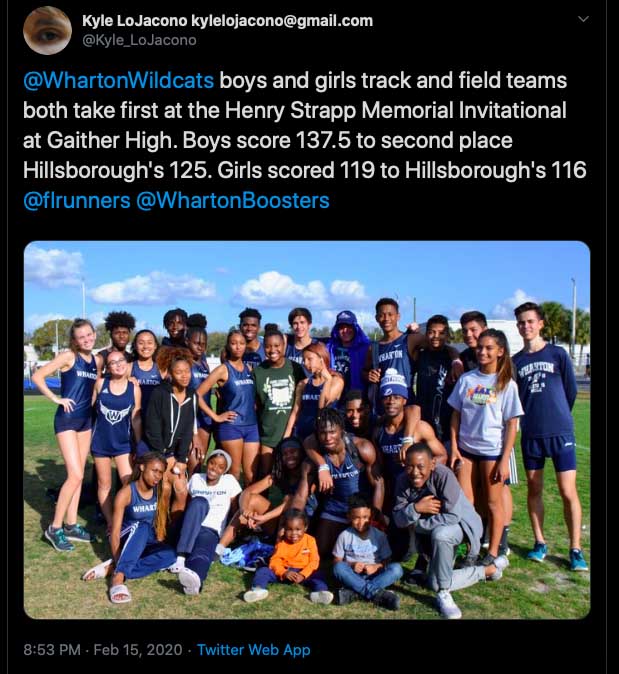 Wharton won the boys team competition however, based on its depth in a variety of events. Wharton scored in 15-of-17 events and had multiple scorers in eight of the events. Wharton got big points in the high jump with Albert and Mathew Williams taking second and third, each with a leap of 1.73m (5’ 8”). Wharton also took second, third and fourth in the pole vault, with teammate iLLya Jackson (second place) leading the way with a vault of 3.50m (11’ 5.75”).

The Wildcats won the boys meet with a score of 137.5 to Hillsborough’s 125. Robinson, led by Ethan Geiger winning the mile in 4:26, despite some crosswinds, came in third with 88 points.

While the Wharton boys had the title in hand by the time the 4 X 4 took off, the Lady Wildcats had to come from behind to defeat Hillsborough.

The Wharton girls entered the event one point behind Hillsborough, but their time of 4:13.47 not only won the 4 X 4 but also won the Lady Wildcats the meet with a score differential of 119 to 116.

“We had a full team effort from everyone today,” Wharton coach Anthony Triana said. “We had some girls missing in some events, so we knew it would most likely come down to the 4 X 4 with Hillsborough. We have had a battle with them for years. It was an exciting race that came down to the end. Much respect to Hillsborough for battling all day with us.” 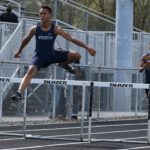 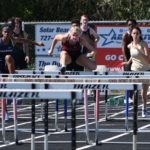 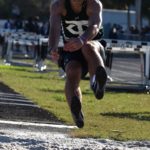 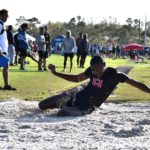 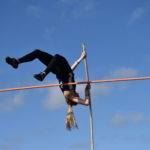 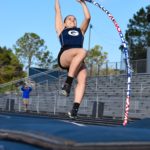 Wharton got significant points from their distance crew, as Brooke Reif won the 1600 in a time of 5:44, and also finished second in the 800. Wharton also took second, third and fifth in the 3200 with Nia Rivers (second place) leading the way with a time of 12:19.

Wharton’s most impressive performance came from freshman Serenity Brazell, who in addition to running a leg on the 4 X 1 and 4 X 4, won the 200 in 25.81, and the 400 in a time of 58.13. She is currently third in the state in class 4A for the 400-meter.
Wharton also had a top performance from senior Mckenzie Connor in the 100-meter hurdles. Her time of 15.24 won the event and has her sixth in state 4A rankings for the event.

Academy of Holy Names was third with a team score of 103.

Riverview senior Alyssa Hendrix started off the day with a blistering 10:40 in the 3200. The defending state champion and North Carolina State signee was only eight seconds off of her lifetime PR. Despite a heavy load this week in training, Hendrix felt ready to open with a fast time.

“I just wanted to focus on feeling comfortable running fast by myself,” Hendrix said. “I wanted to run around 10:40 and I felt good enough, even though I had a high mileage week. This upcoming track season I have been feeling a lot stronger so I knew I could get around my time from last year in my first race this year.”

Newsome’s Keleigh Scallon began her quest as well to win a state title, last season’s state runner-up in the 800, won a close race in the event with a time of 2:15.29. That mark has her as the current state 4A leader.

Scallon’s classmate, Wolves boys runner Dominic Acosta is also on top of the 4A leaderboard in the 800. He won the event in a time of 1:59.51 and then also won the mile in a time of 4:30.

Newsome’s boys also got a big performance from Macarius Wright. The junior won the 3200 in a time of 9:42, which also joins his teammates at the top of the 4A leaderboard. He also bested Denton Anderson from Lake Wales in the event, who was the state runner-up from last season.

Though currently out of the country and not in attendance at the meet, Newsome coach Orlando Greene texted the results were, “a wonderful start to the season and (we) are looking forward to positive improvements as we move forward.”

Other area teams in the top 10 included the Riverview girls at fifth and the Seffner Christian boys, bolstered by Adam Nipper’s 9:55 in the 3200, which helped the team finish eighth.

ST. PETERSBURG – Lennard traveled to Pinellas County and its boys may or may not have won the West Coast Invite. The Longhorns went home with the first-place trophy, however there is confusion with the scoring and the online results currently show them in second.

Coach Eric Blicker is pleased to see that Gant’s effort are paying off.