LUTZ – To say that Ally Szponar is “daddy’s little girl,” would be an accurate statement in the general sense of that phrase. However, with Ally and her father Coach Bobby Ennis, it goes way beyond that.

Bobby Ennis and his daughter Ally have always shared a lifelong love of track and field (photo provided by Ennis Family).

These two are, according to the best historical research available, the only father/daughter combo to coach separate state champions in any sport. Coach Ennis is a member of the FHSAA Hall of Fame and has coached 10 state champions (teams & individuals) as well as 10 state runners-up.

Bobby Ennis began his coaching career at Leto in 1976 and quickly grew what became known as the Long Red Row into a state powerhouse in Florida cross country. In 1984, not only was another Leto state championship born, but so too was Allison Ennis.

She got on the fast track to becoming “assistant coach” and as she puts it, “ I grew up at the Nash Higgins Relay!”

Her father’s love for the sport certainly rubbed off on Ally (a former hurdler for Leto) and her desire to become a coach led her to pursue a career in teaching, which naturally led the way to coaching. Ally Szponar, nee Ennis, started out coaching cheerleading, but by 2016 was coaching the boys distance runners at Steinbrenner, where this fall she led the Warriors to its first state championship in boys cross country.

When asked what makes Ally the coach she is, her father said, ”she is the consummate motivator and has a critical eye for all events in track and field, not just the distance events. She emphasizes discipline, accountability and high expectations.”
When asked to elaborate on her father’s career and what made him the HOF coach that he is, Coach Szponar’s reply was befitting of a daughter who was raised to be a good person and let that trickly down to your coaching.

“He’s forgotten more than most of us coaches will ever know,” she said. “(He is) a true student of track and field, but more importantly, he instills in the boys a sense of wholeness. Our motto is, ‘Gentlemen, Scholars, Athletes,’ in that order. He absolutely cares more about establishing them as young men heading into life rather than just runners heading into the chute.”

Ennis retired after the 2018-*19 school year, and when asked what he planned to do in retirement, it had nothing to do with track or cross country.

“I have one grandson who has one grandfather, so that’s what I’m going to be,” he said.

Though it would not be surprising if Coach Ennis is unable to stay off the infield completely in the years to come, he has certainly left the Steinbrenner boys distance runners in more than capable hands. The baton has been passed, the exchange zones are all white flags!

RIVERVIEW – In the 1986 movie Hoosiers, Hickory High wins the basketball state title in Indiana despite having to take on schools with ten times its enrollment. In one of the final scenes prior to the championship game, Coach Norman Dale (portrayed by Gene Hackman) reminds his team that the court they were playing on was the same dimensions as the court they practiced on back at their campus.

You could argue that Hickory High had it easy compared to Bell Creek Academy.

The Panthers have emerged as one of the top teams in Hillsborough County and in Florida despite the fact they don’t actually have an on-campus track to practice on. 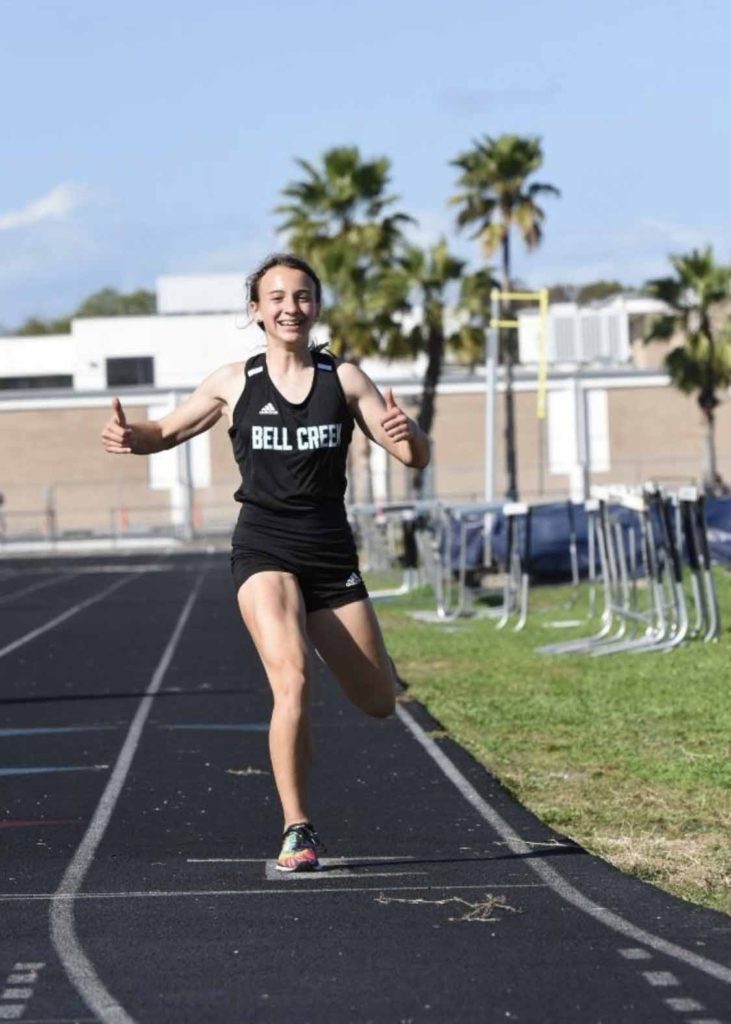 “We have to workout on a grass field and I have to store all of the equipment in my garage,” said Bell Creek head coach Jason Gonzales.

“On meet day, we feel like we have a mental advantage,” Gonzales said. “The kids are very hungry and they see the results, (and) that’s what gives them that little edge.”

This past weekend, Bell Creek traveled to Lakewood High in St. Pete for the West Coast Invite. The girls team emerged as champions over 10 other schools. Leading the way for the Panthers was Angel Parks, who won the 100m and 300m hurdles, and the junior also scored in the long jump and 4 X 100. Parks’ time of 46.90 in the 300m hurdles has her currently ranked first in the state for 1A. 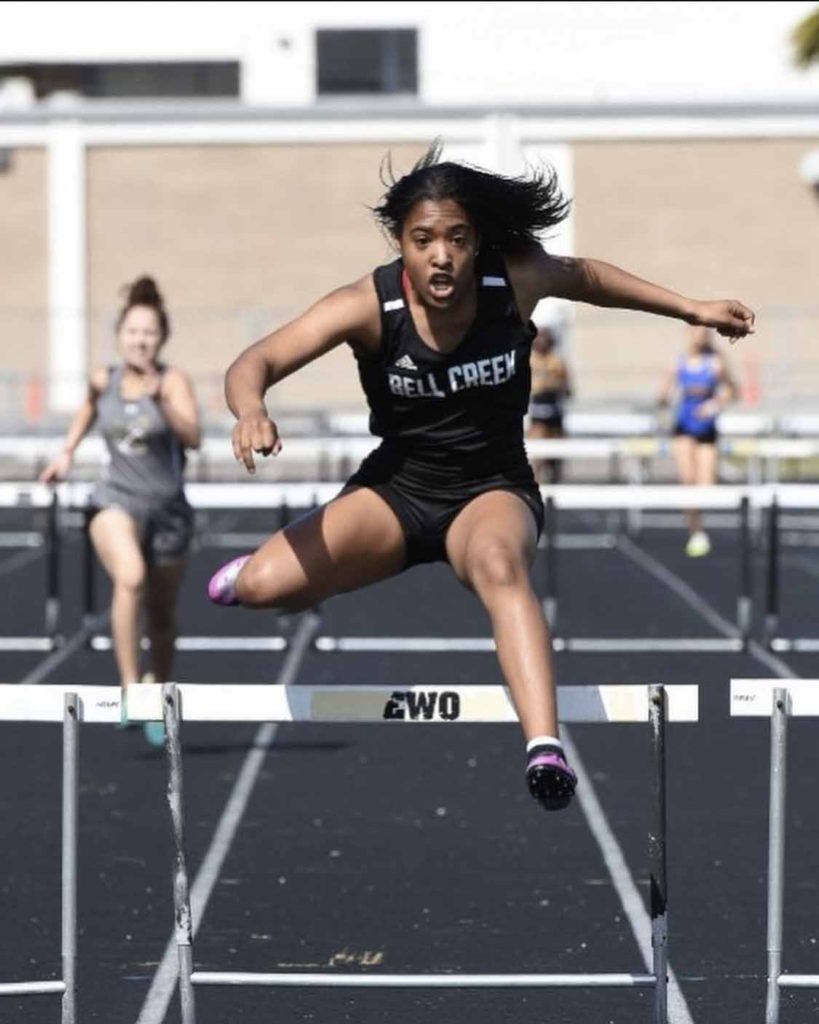 “She is dedicated and she will go down to Miami and run meets on her own,” said Gonzales. 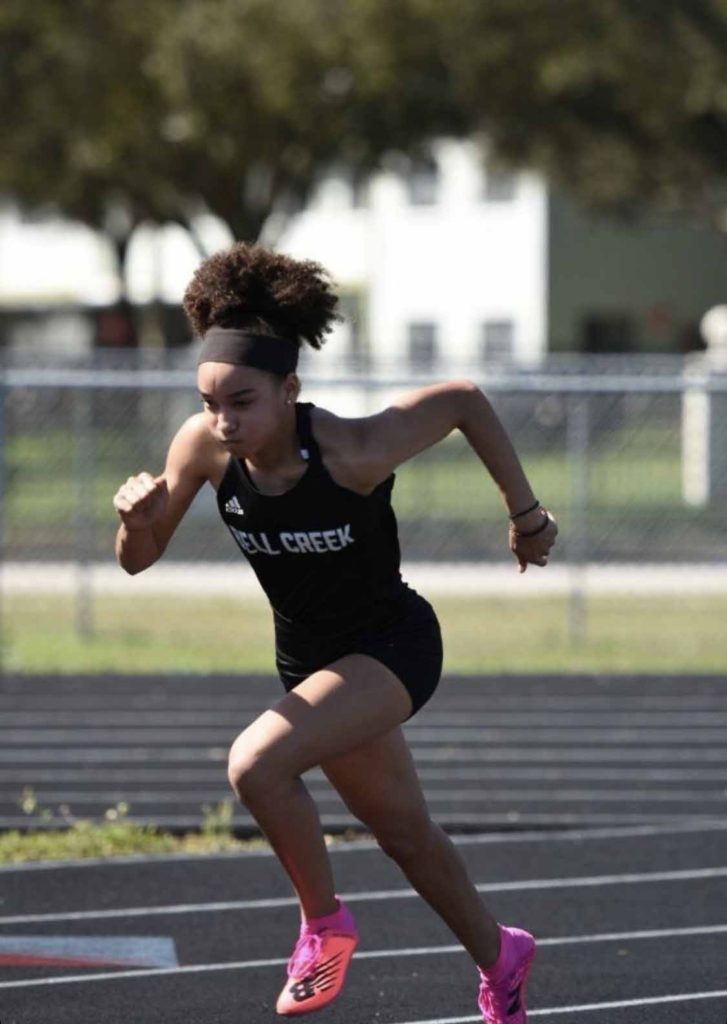 As a result, one week into the season, the Bell Creek girls are ranked second in the state in 1A according to FLRunners.com.

Coach Gonzales says that the plan coming into the year wasn’t necessarily to win hardware at the state meet and this early ranking shouldn’t change their long-term outlook.

“We’re going to stick to what works for us,” he said. “I do think this (ranking) will make our kids a little bit hungrier, not just on the track but also in the classroom.”

News and notes from Western Hillsborough Track and Field: Picking up where he left off, the 2019 3A state XC champion, Robinson’s Ethan Geiger had two solo 1600s of 4:19.51 at a three-way meet at Chamberlain, and barely missed his meet record at the Henry Strapp Memorial Invite at Gaither this past Saturday, running a crosswind hindered 4:26.67. At the Chamberlain meet Ethan also doubled back for a six-second victory in the 800, running 2:01.29, his third-fastest effort ever in the two-lap event. Robinson coach Mark Altimari said, ”Ethan is basically training through the first half of the season, getting ready for what really matters, the state series competitions” … Jefferson sprinter Jamari Gassett sits second in the 3A-District 8, 100m rankings, but not to be undone by her male counterpart on the Jefferson sprint squad, Cache Miller leads the district sprinters with a time of 12.81 … Alonso coach Roger Mills is still grinning ear-to-ear weeks after the installation of his new latex track, which played host to the Kincaid Classic on February 6. The wind was gusting upwards of 40mph, but it was a relative breeze compared to the pride and gratitude that Mills said he has for the many donors and countless volunteers that made this dream track a reality. Ravens don’t blink, and neither did Mills when it came to seeing this endeavor through to fruition. Congrats Coach Mills, your entire coaching staff and Alonso administration.

News and notes from Central Hillsborough Track and Field: Hillsborough High has had a long line of successful triple jumpers and freshman Kylen Webb looks to be next in line. In his triple jump debut for the Terriers, Webb posted a mark of 12.89m (42’ 3”) to win the event at the Henry Strapp Invite over the weekend. This is not however, his lifetime best as Webb jumped 13.83m (45’ 4”) last year while competing in AAU … Tampa Bay Tech’s Akari Issac just missed out last year at placing in state in both the shot put and discus. Her campaign to medal this year is off to a good start. After her throw of 36.02m in the discus and 10.82m in the shot put at the Henry Strapp Invite, Issac is ranked second in the state in Class 3A for discus and seventh in shot put … Anson Roe of Jesuit won the pole vault at the Henry Strapp Invite with a vault of 3.50m (11’ 5.75”). This was far from his best, as he opened his season with a vault of 4.27m (14’ 0”) at a home quad meet. The senior was 11th at state last year and is currently ranked first in the state for 3A.

Editor’s Note: These rankings are based on athlete rankings in the county that go 16 places deep. If an athlete is ranked first in the county, they get credit for 20 points. An athlete ranked ninth earns 10 points (all the way down to one point for 16th). This is in an effort to reward all around team depth vs having a couple of studs. Rankings accurate as of 2/18/20. 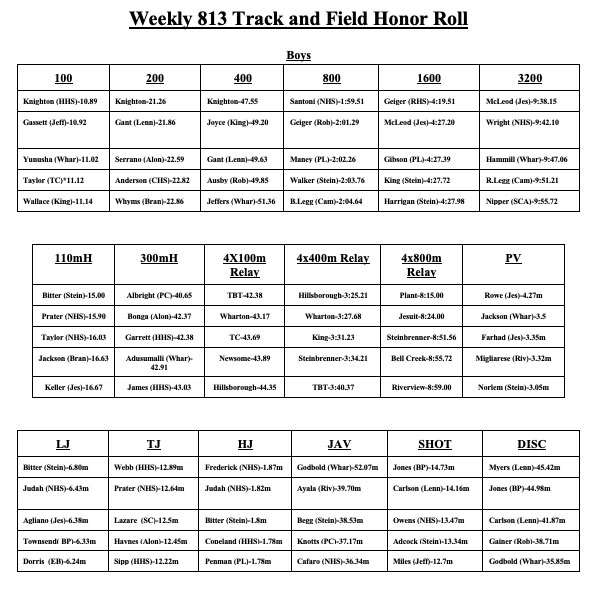 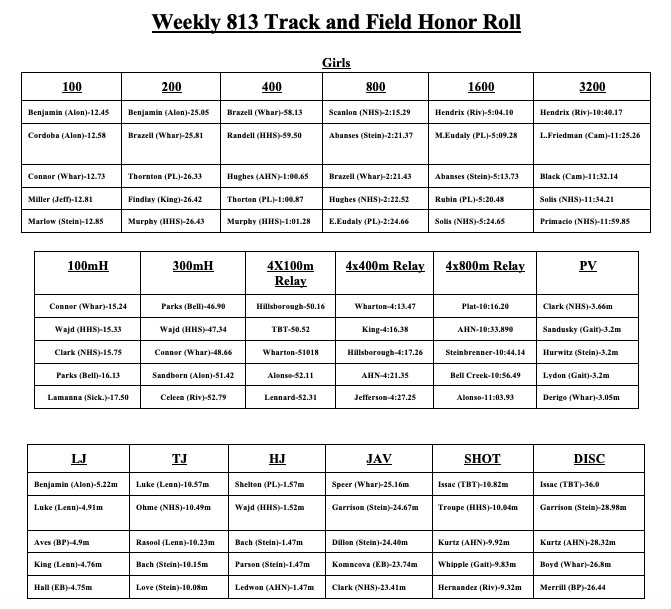