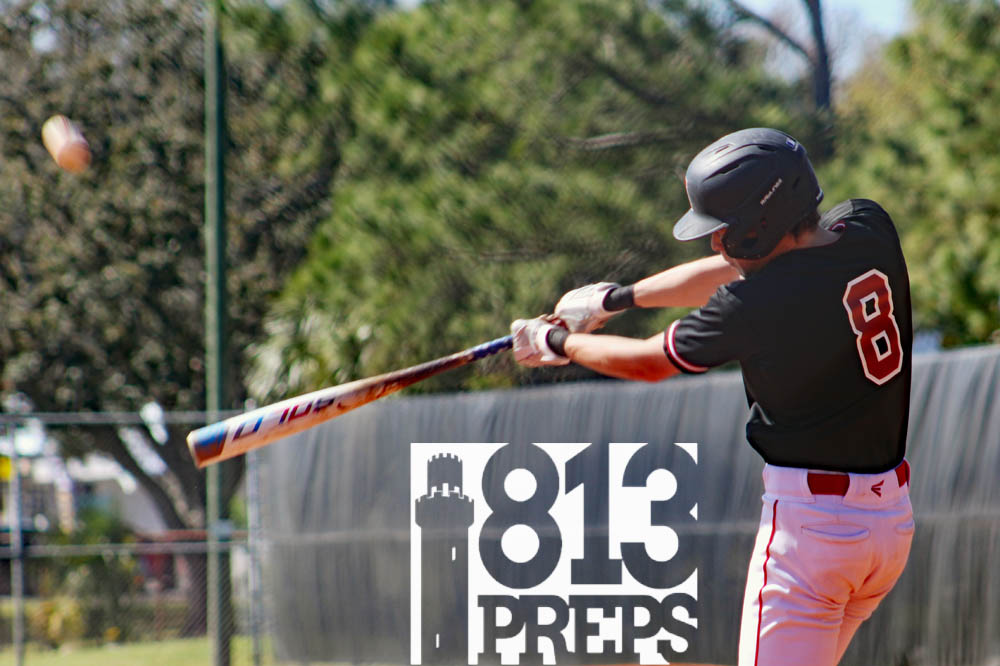 Jack Slater smashed this fourth-inning fastball over the rightfield wall for a three-run home run. The Terriers junior also had a single and double in the game, finishing with seven RBI.

TAMPA – First-year Hillsborough head coach Bryan Burgess said after playing a pair of games earlier in the week, he considered not having a varsity practice Friday in chilly, windy conditions with an afternoon game at Plant the following day. Instead the offense kept its routine and Burgess said he was happy with what he saw. He was even happier after Saturday afternoon, when Hillsborough’s offense came to play, putting up 12 hits and picking up its third win of the week with an 16-8 victory against the Panthers. 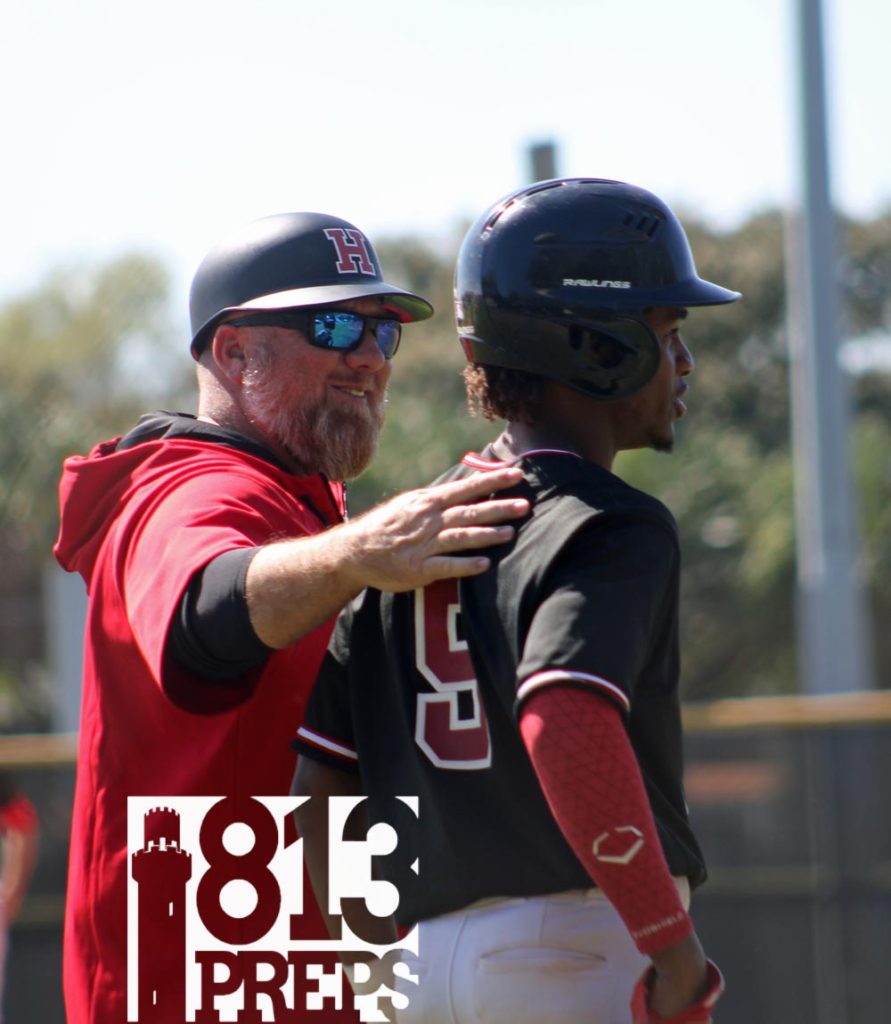 Terriers coach talks with senior Trarell Howard during a Plant mound visit. Howard had a pair of hits, an RBI and two runs scored.

“We could have easily thrown yesterday’s practice away, but we didn’t,” Burgess said. “We went out, hit into the wind, set some screens up, stayed in the middle of the field and the second inning came today and they applied all of that from yesterday.”

No one seemed primed to swing it better than backstop Jack Slater, who after watching Plant plate five, first-inning runs, helped spark the comeback with an RBI single in the second, a bases-clearing double in the third and a no-doubter rocket over the right field fence in the fourth, tallying the junior seven RBI in the win.

“We had to get out there (on Friday) and get our work done in (batting) practice,” Slater said. “We worked on staying up the middle and it paid off today … I was looking for a fastball and put a good swing on it.”

Slater was all over the stat sheet, also coming up with a big catch falling backwards on a foul pop in the second, and ending the game by corralling another one behind the dish. 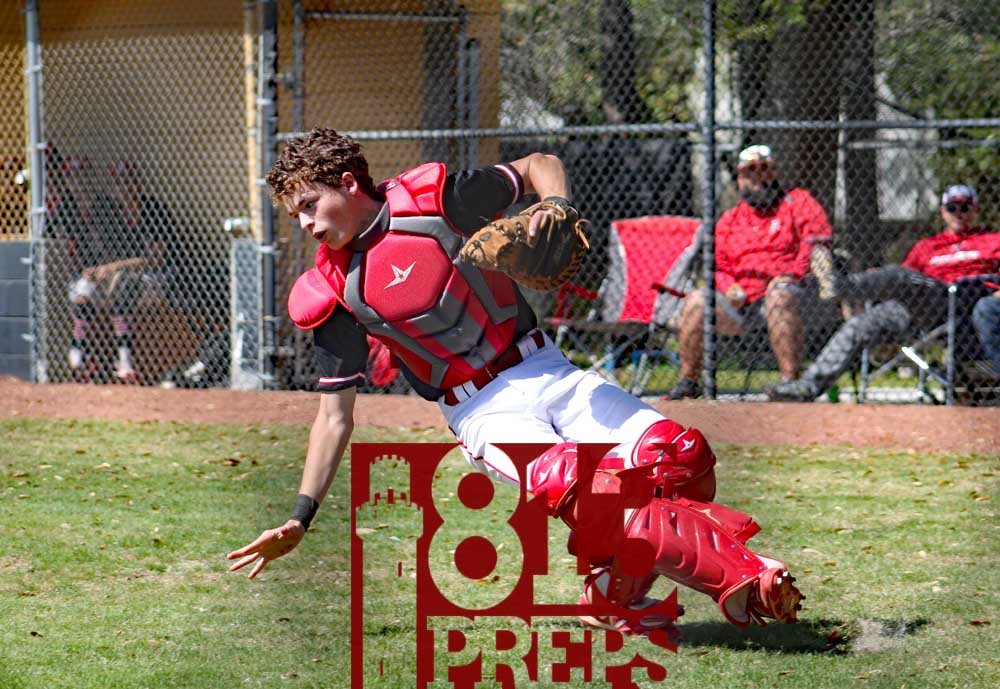 Jack Slater comes crashing to the ground after making a good adjustment and catch of a foul pop behind the plate.

Plant (1-2) took advantage of two Terriers errors in the first, scoring five runs in an inning that featured a bases-loaded walk drawn by Joe Keyser and an RBI single from Reece Soper (2-for-4, double).

However, Hillsborough (3-0) answered right back, hanging eight on Plant in the second as Donald Gorgei, Trarell Howard and Brady Burgess added RBI hits to go along with Slater’s single.

“We would have laid down in the past, to be honest with you,” Coach Burgess said. “Down five early, we might have laid down, but we didn’t. Our guys are young still, but they’ve been together a few years and we’ll take a 3-0 start.”

Sam Meade answered the next inning singling in Conley Strayer, who led off with a double for the Panthers, only to see the Terriers added five more in the third and three in the fourth. 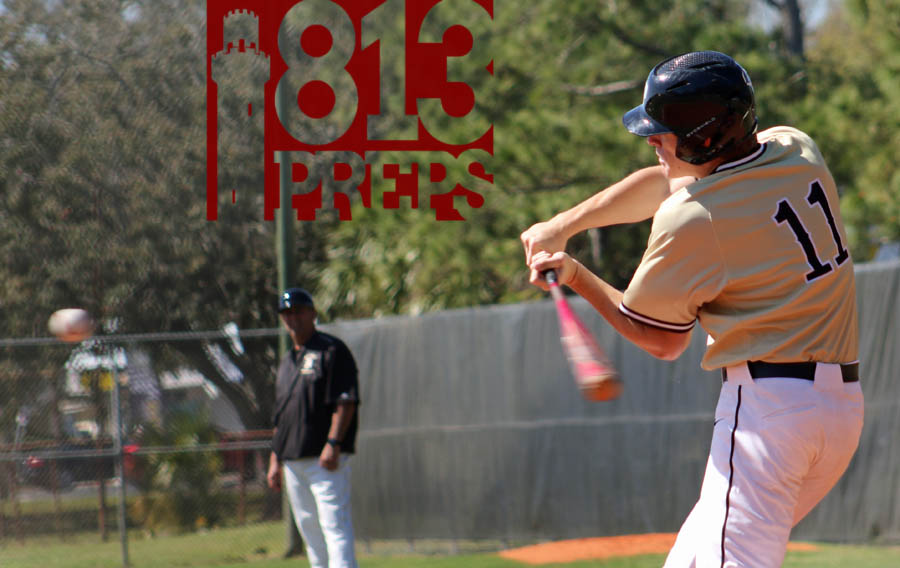 Plant’s Sam Meade takes a swing on what would be an RBI single in the second inning. Meade was 2-for-4 with a run scored in the loss.

Hillsborough got an RBI double from Tanner Jones, while Trevor Jones reached four times in the win, scoring three runs.

Brady Burgess earned his second win of the young season, tossing three innings, allowing three earned runs, on five hits and striking out one, but it was sophomore Salvy Urso Jr. who did a lot of heavy-lifting on the mound. Urso worked the final four frames, allowing one run on three hits and earned his second save, while also adding a pair of hits, a run and an RBI on offense.

“I had to throw strikes, do the job and let the defense do the work,” Urso said. “I trust the guys behind me and that makes it very easy for me (on the mound).” 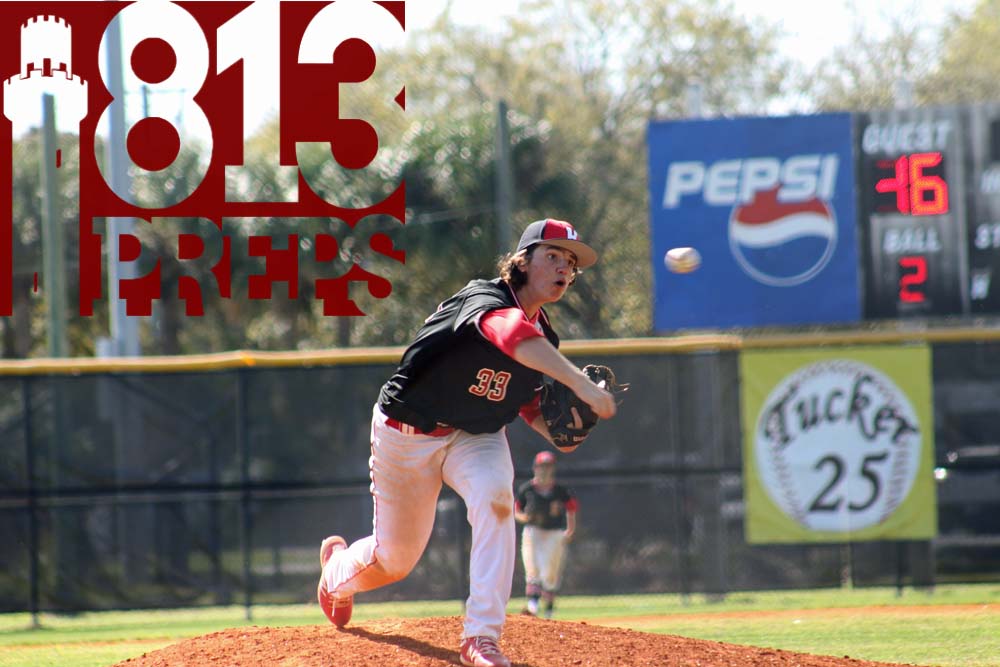 Hillsborough’s Salvy Urso tossed four innings of relief, allowing just one run on three hits, earning the sophomore his second save this season.

Plant got an RBI single from Nick Lee in the third, and the junior centerfielder made a great defensive throw doubling off a runner at first base in the sixth; and a pair of pinch hitters gave the Panthers a final-inning run as Gabe Suarez doubled for his first varsity hit and Brooks Bak singled in the score.

Senior captain Reece Blanco made a quick-reaction play at catcher coming up with a catch on shallow, foul ball right behind the plate, and also moved to the mound and put up a 1-2-3 inning in the seventh. 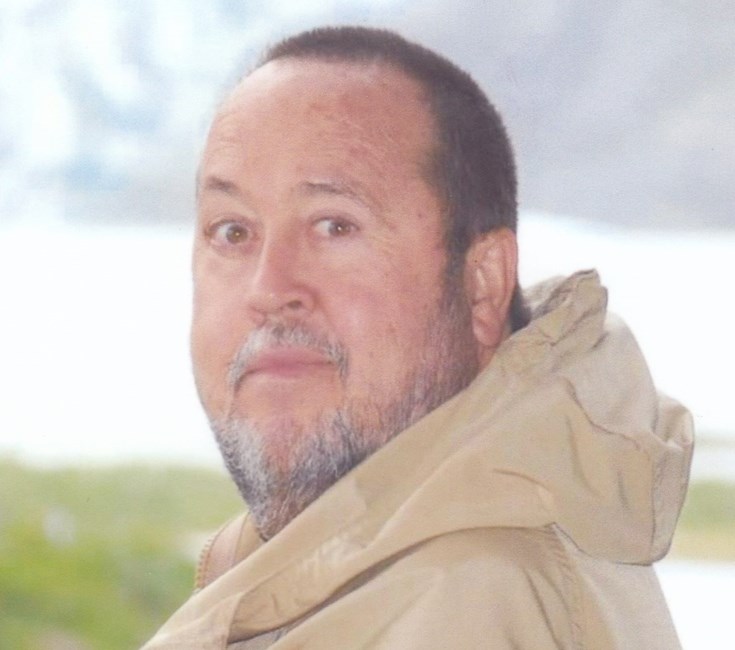 The win held some special importance for Burgess who, though he has spent 16 years on the coaching staff at Hillsborough and has taken the head job this season, was a former player at Robinson High. He said that he, along with three other Terriers coaches either graduated from or coached at the South Tampa school at some point. And the win was dedicated to their friend and longtime Robinson teacher and DECA advisor Coach Mark “Pete” Peterson, who passed away on February 14th and whose funeral was during the game on Saturday.

“We’ve got four Robinson Knights on staff who had some hard times getting wins down here at Plant,” an emotional Burgess said. “Today is Coach Pete Peterson’s funeral, one of the biggest and best Robinson Knights you’ll ever come across. So, to get this win today means a lot.” 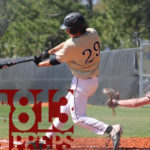 Plant’s Conley Strayer scored the game’s first run, had a double and scored again in the second inning. 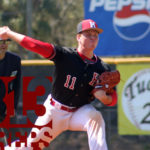 Hillsborough junior Brady Burgess picked up his second win of the week on the mound. 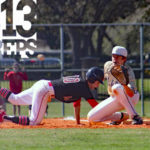 Hillsborough’s Trevor Jones dives back into the bag as Plant first baseman Sam Meade waits on the throw. Jones reached base four times and scored three runs in the win. 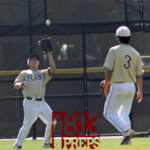 Plant CF Nick Lee makes a catch. Lee had one of the best plays of the game, making a catch on a deep fly and then doubling off a runner with a throw in to first base. 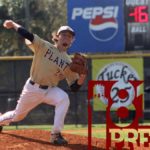 Plant senior captain Reece Blanco caught the first six innings and then worked a 1-2-3 inning on the mound. 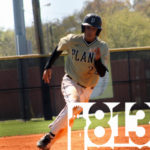 Reece Soper on the base path on Saturday. Soper had a pair of hits including a double and an RBI for the Panthers.