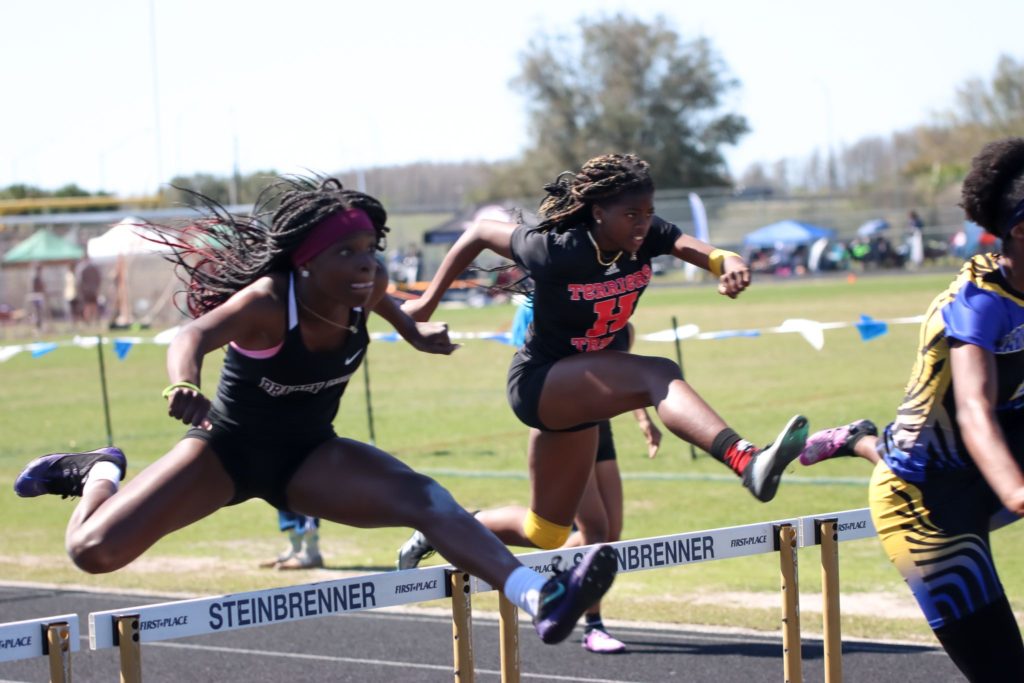 LUTZ – A mix of 40 Hillsborough County and out-of-county teams descended upon Steinbrenner High on Saturday for the annual Steinbrenner Invitational. For the second week in a row, the Hillsborough High girls team had the team title come down to the 4 X 400m.

Hillsborough girls head coach Vernest Pilcher said it’s tough being runner-up for the second straight week, but the team will bounce back.

“It is part of the process of learning how to finish and how to dig deep when fatigue sets in,” Pilcher said. “We will learn from it and get better.” 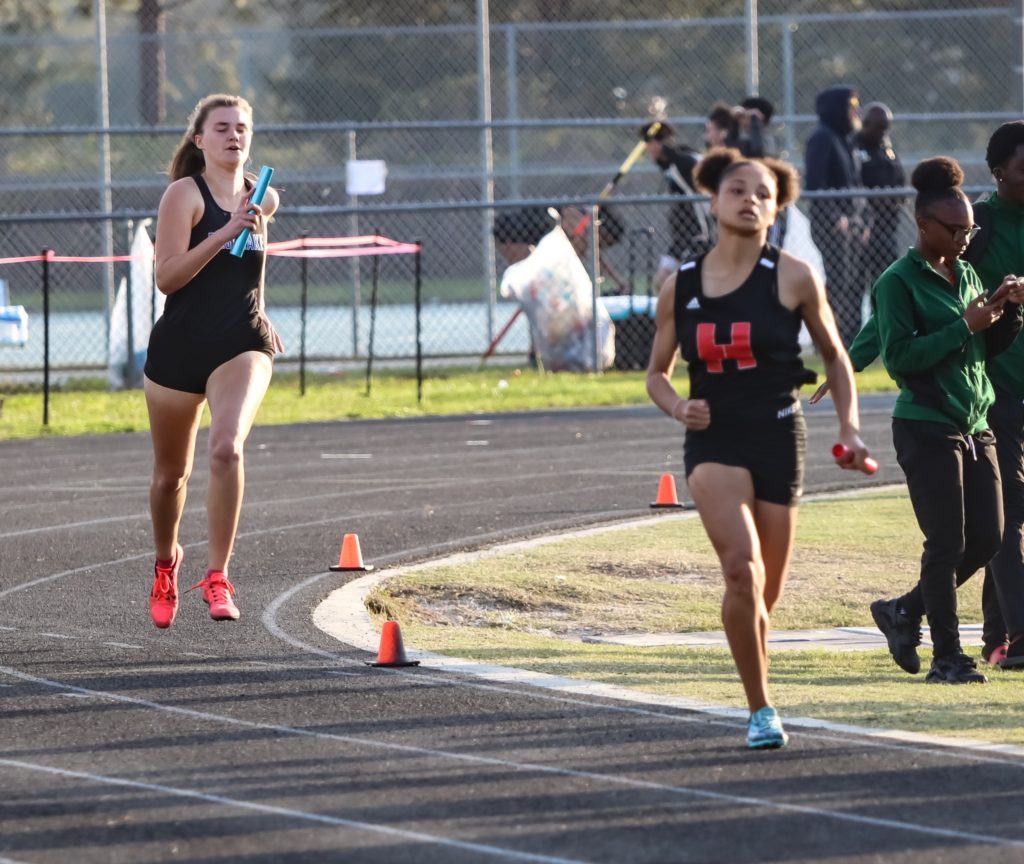 Hillsborough’s Nia Randell finished second in the 400 meter, and also ran a leg of the 4X400m. (Photo provided by Vernest Pilcher)

Hillsborough had a chance for the team title thanks to the performance of Nia Randell. The freshman was second in the 200m with a time of 26.74 and improved upon her 400m time from last week to run 58.97 and place second. Randell also ran a leg on the 4 X 400m.

“Nia is progressing well. She does not worry about her place in the meet, she worries about her time. She has put time in (during) the off-season,” Pilcher said.

The Steinbrenner girls finished third overall and were able to hang around until the end thanks to two event winners. Jaquelyn Abanses opened the day winning the 3200m over last year’s 4A state runner-up, Plant’s Mary Ellen Eudaly, with a time of 11:06.26 (just one second off her PR). Eudaly ran 11:13.71.

Rebekah Hurwitz won the pole vault for the Warriors with a vault of 3.15m (10’ 4”). She was joined by Ryleigh McElroy and Katrina Nicolasora (fourth and fifth) as point scorers in the event. Steinbrenner also got key points in the javelin when Rachel Garrison and Sommer Dillon earned third and fifth-place finishes respectively.

The boys meet was an equally loaded field that didn’t quite have the same team drama as the girls meet. George Jenkins easily won the meet with 93 points. Jesuit was the highest finishing local team with 54 points to come in third and Hillsborough was fourth with 52 points. 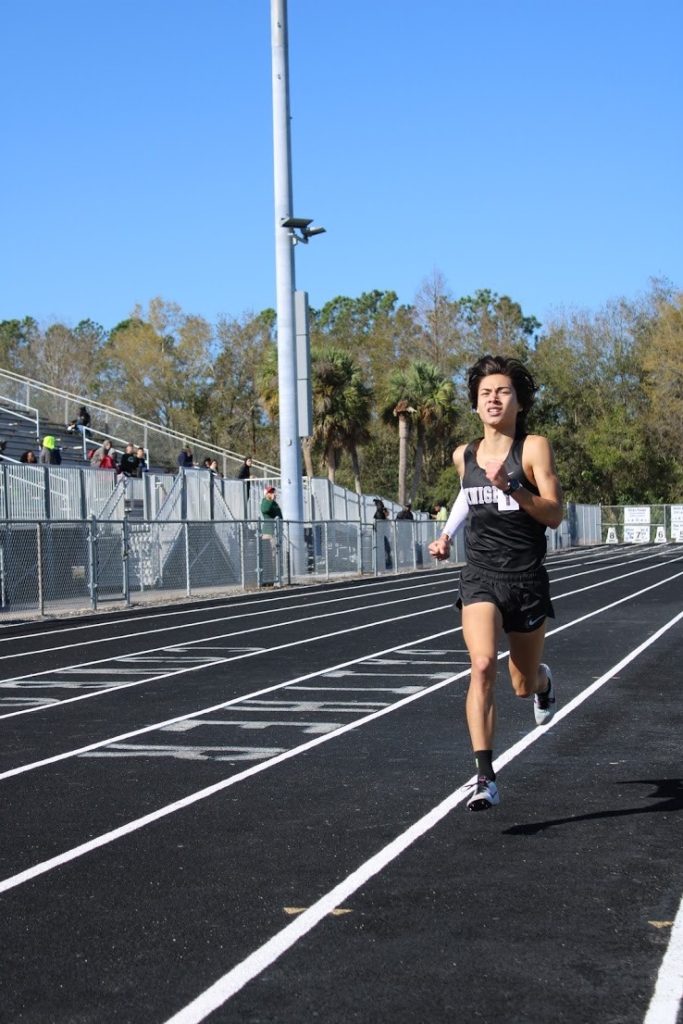 Robinson’s Ethan Geiger, the defending 3A state champion in the 3200 meter, ran a 9:06.54 to win the event during Saturday’s meet. (Photo provided by Shea Dingle)

The most impressive Hillsborough County performance from the day came from the day’s first race – the 3200 meter. Robinson’s Ethan Geiger went out hard and never looked back. Eight laps later the future Florida Gator ran a lifetime best of 9:06.54 to win the event over a talented field by 36 seconds.

Geiger is the defending 3A state champ in the 3200m and in cross country, but even he didn’t expect to run that fast on Saturday.

“My main intention was to try to go for a PR early during the season to help position myself for a better spot for the bigger meets in the future,” Geiger said. “I did know that sub 9:10 was a possibility, but still saw it to be far out of my reach. Today was a bit of a surprise for me because of how I ran faster than my initial expectation.”

His time leads the entire state in all classifications in the event by 11 seconds.

Keith Gibson of Plant ran a still impressive 9:42.48 to come in second. He is currently eighth in the state for all classifications and second for 4A.

Lawson McLeod of Jesuit now sits second in the state for 3A in the 1600m, only behind Geiger, after running a lifetime PR of 4:21.69. The sophomore had not broken 4:30 in the event coming into the season. McLeod also won the 800m earlier in the meet with another PR of 2:00.96.

Another performance to place on the state leaderboards came from Plant City’s Jackson Knotts. While the junior had no prior experience throwing the javelin prior to this season, that didn’t stop him from a throw of 44.45m (145’ 10”), ranking him third in the state for 4A. 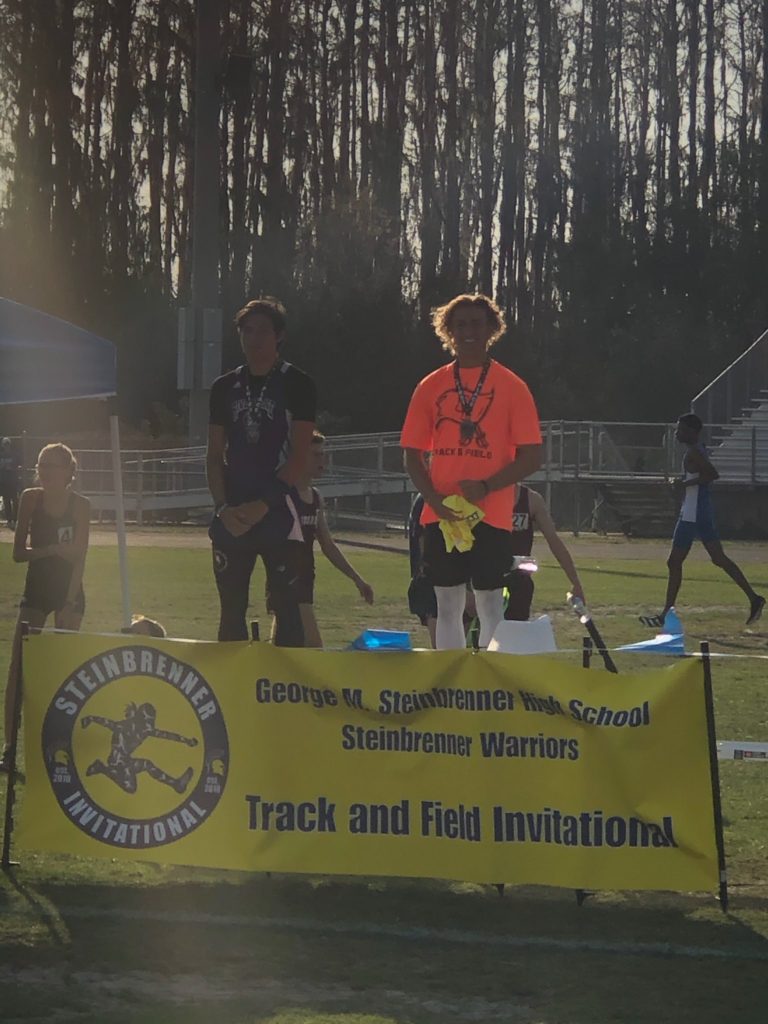 Plant City’s Jackson Knotts on the medalist stand after a javelin throw of 44.45m (145’ 10”). Knotts just started competing in the event this season. (Photo by by Sara Tooman)

Alonso’s Sowande Walker also shot up the leaderboards in the discus. The 4A runner-up from last year won the event with a throw of 48.29m (158’ 5”) and is currently second in the state for 4A.

“Powley and Walker have been running together since their freshman year,” Cwiklinski said. “They have been working with Harris and Tippit on the expectations of technique we have.

“We plan to keep putting them in situations they are uncomfortable with and working on the things we strugle with.”

Alonso’s Garren Haynes was the final event winner from the county, winning the triple jump with a distance of 12.95m (42’ 6”).