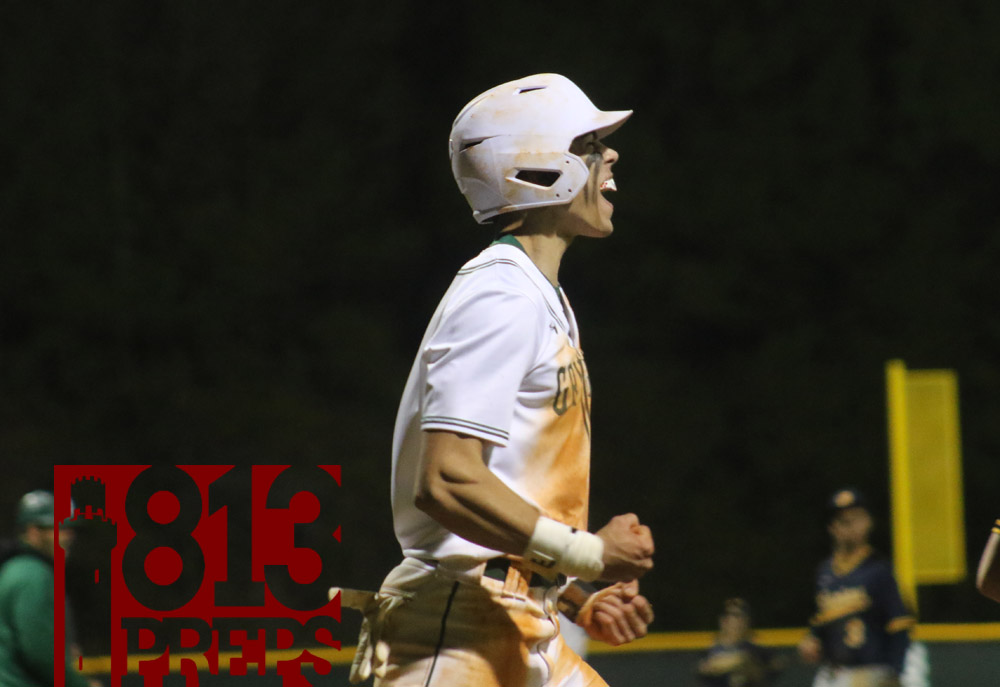 Playing in his first game of the season, Sickles senior Nick Duran 2-for-2 with an RBI sac bunt and scored twice, including the run that preceded this celebration that gave the Gryphons the deciding run.

CITRUS PARK – A sloppy fifth inning, which featured three errors, almost saw Sickles let a win slip away as Steinbrenner erased a five-run deficit. However, the Gryphons aggression on the bases and batting barrage proved too great for the Warriors as Sickles put up a run in its final two innings of offense to claim an 8-6 district win.

“You just have to be calm in that moment,” Sickles junior Kohl Robertson said. “We know how to play this game. It’s a seven-inning game … so we just kept playing because we couldn’t let this one slip.”

Sickles (3-1, 2-0 in 7A-7) got at least one hit from every member of its starting lineup and took a solid lead after a pair of runs in the second and a four-run third inning doubles from Nick Duran (2-for-2, two runs, RBI and three stolen bases in his first game of the season), Justin Allen and Trey Bacon, allowing with RBI hits by Robertson and Derek Shaw. 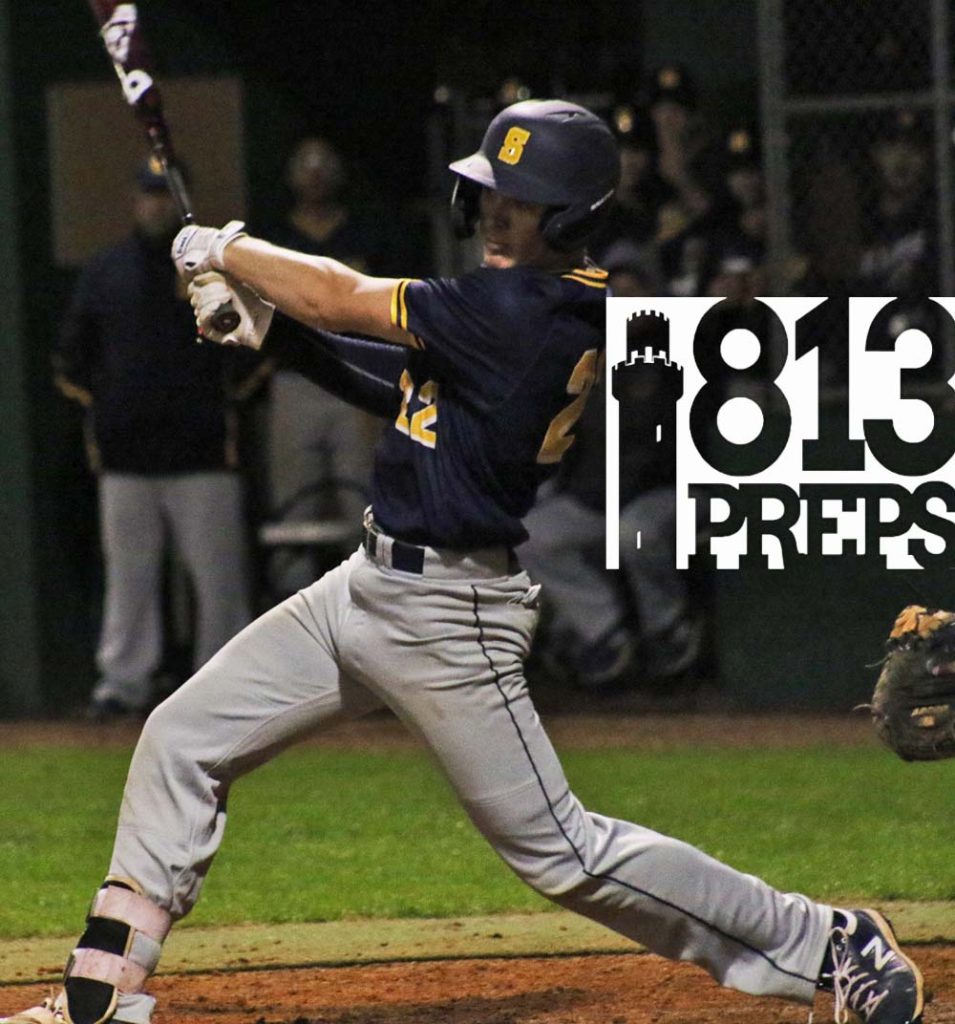 Steinbrenner junior Tayden Hall singles in the third inning. Hall was 3-for-4 in the loss, with a double and an RBI.

The fifth inning saw Steinbrenner (2-2, 0-2 in 7A-7) rally as leadoff hitter Ryan Lowder’s speed provided an infield single, and forced a bad throw allowing him second, before Tayden Hall (2-for-3) found the gap with an RBI double. More defensive woes followed as a runner reached on a dropped third strike and a bad throw down from the backstop Allen allowed another run to cross.

Things continued to spiral as an error allowed another runner to reach first and a run to score, this one even more costly as a collision at first base forced Gryphons senior standout Chase Centala to leave the game. Centala would head to the hospital, but Gryphons coach Eric Luksis reported after the game that the injury, which he feared might be a broken rib, was instead just a bone bruise; his status for the next few games is unknown.

Griffin Garcia continued the Warriors comeback with an RBI double, and pinch-hitter Nolan Hales added a two-run single to tie things at six.

Asked if he was surprised that the rival Warriors came back from the five-run deficit, Gryphons senior Trey Bacon said: “Oh no, we talked about it pregame, we knew they are going to fight the whole way, that they were never going to fold and let us beat them. We stayed calme and were able to stay in it until the end.” 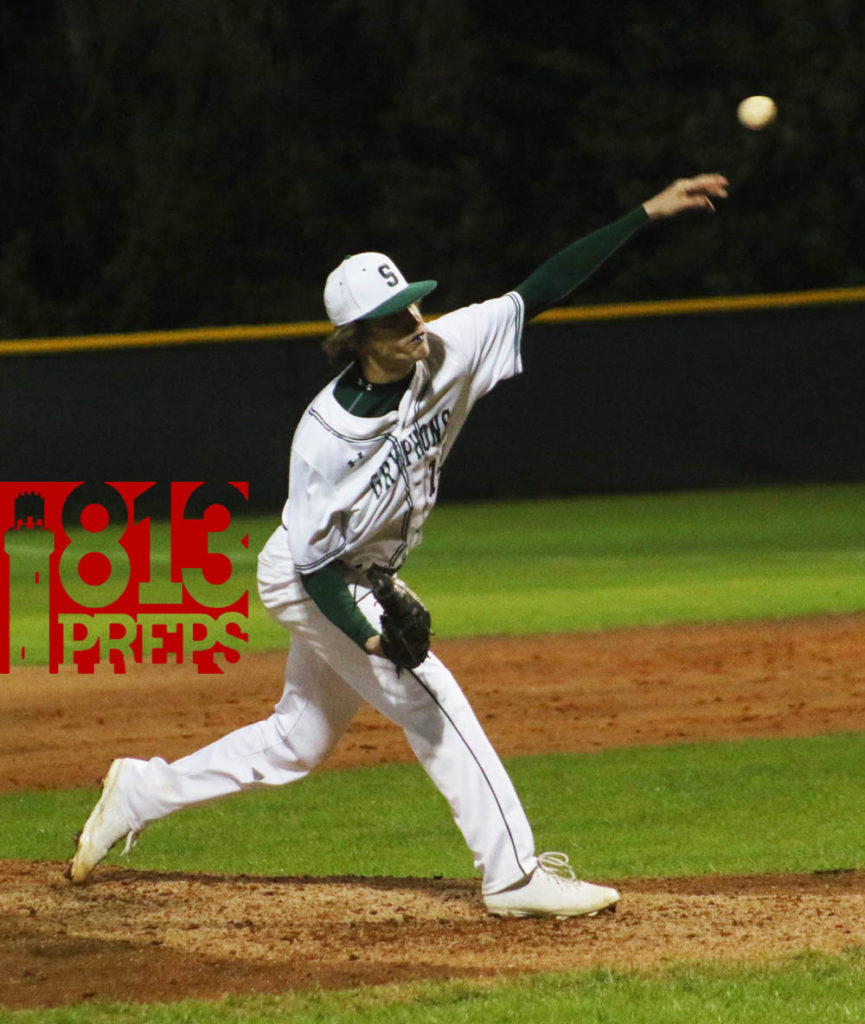 Junior lefty Holden Wade got a no-decision in the game, despite a 10-strikeout night on the mound for Sickles.

Lost in the shuffle of the ugly defensive inning was Gryphons starting pitcher Holden Wade, who ended up allowing six runs, but only one earned over 4 1/3 innings where the junior fanned 10 hitters.

“(Holden) is just on fire,” Allen said of his battery-mate. “The off-speed was working, he was hitting his spot. He’s been great this year.” 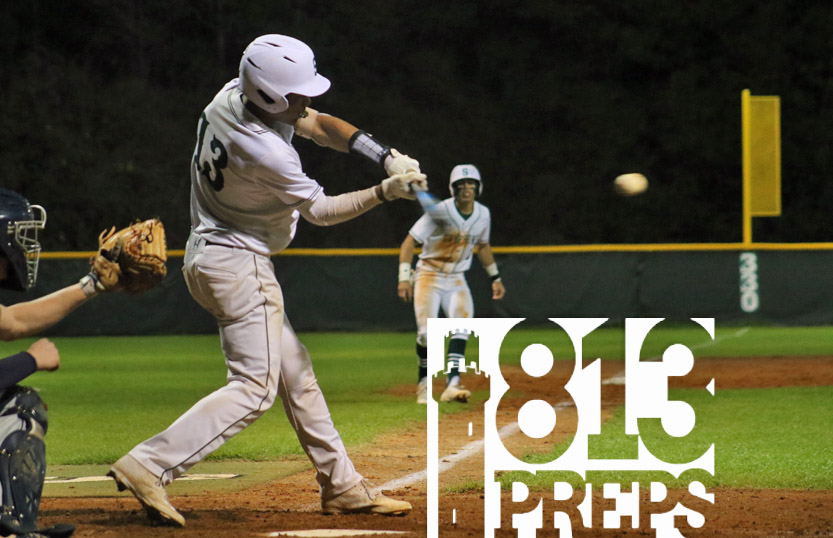 Gryphons freshman Justin Allen connects on his RBI double in the second inning. Allen also had an RBI single to drive in the winning run.

Allen, the Gryphons freshman catcher, admitted after the game he was hoping to have a chance to make up offensively for his errant throw in the Warriors inning. He did just that in the home-fifth cashing in Duran with an RBI single to right to plate the eventual winning run.

“There was a little fire that started there,” Allen said. “I was just trying to put the ball to the opposite side of the field and drive in that run.”

Sickles would add an insurance run in the sixth as a sac bunt from Robertson drove in Bacon. After last season where the offense had some big bats in now-graduated Dylan Eskew, Danny Bernstein and Justin Turk, the Gryphons have clearly adopted a more speed and small-ball mentality than in previous years.

“We’ve changed a few things from last year,” Robertson said. “We have to do anything to get on base, anything to get runs in. It’s about doing whatever we have to, to get this team on the board.” 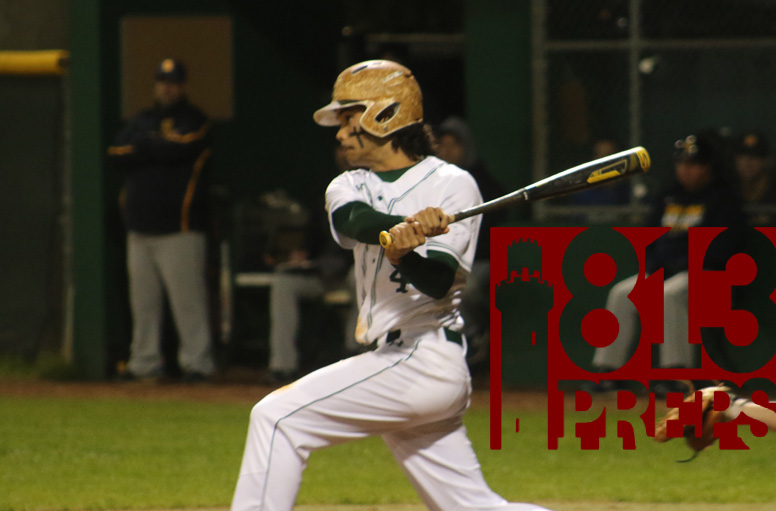 Sickles senior Trey Bacon follows through on a double in the third inning. Bacon had two hits in the win, stole home for one of his two runs, and picked up the save on the mound.

Bacon did his part on the mound over the final two innings, striking out three to notch his first save of the season, and secure a win in relief for Bobby Christy (two shutout innings, one hit allowed).

Bacon also had a big steal of home plate in the win and credited it to a good strategy over speed.

“I wouldn’t say I’m the quickest person,” Bacon said. “That was more just a good read, a feel for it. You have to do something to make a difference and that was a good play.” 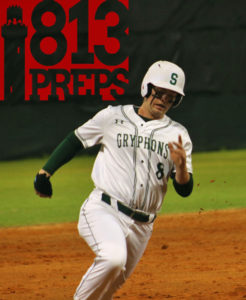 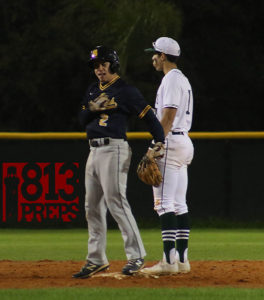 Steinbrenner senior Griffin Garcia thumps his chest after a n RBI double in the fifth. 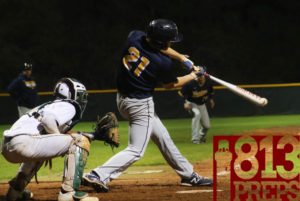 Steinbrenner senior Nolan Hales singled in a pair of runs in the Warriors five-run fifth inning. 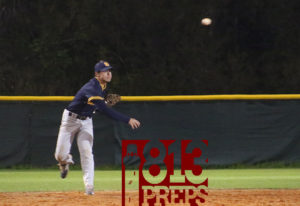