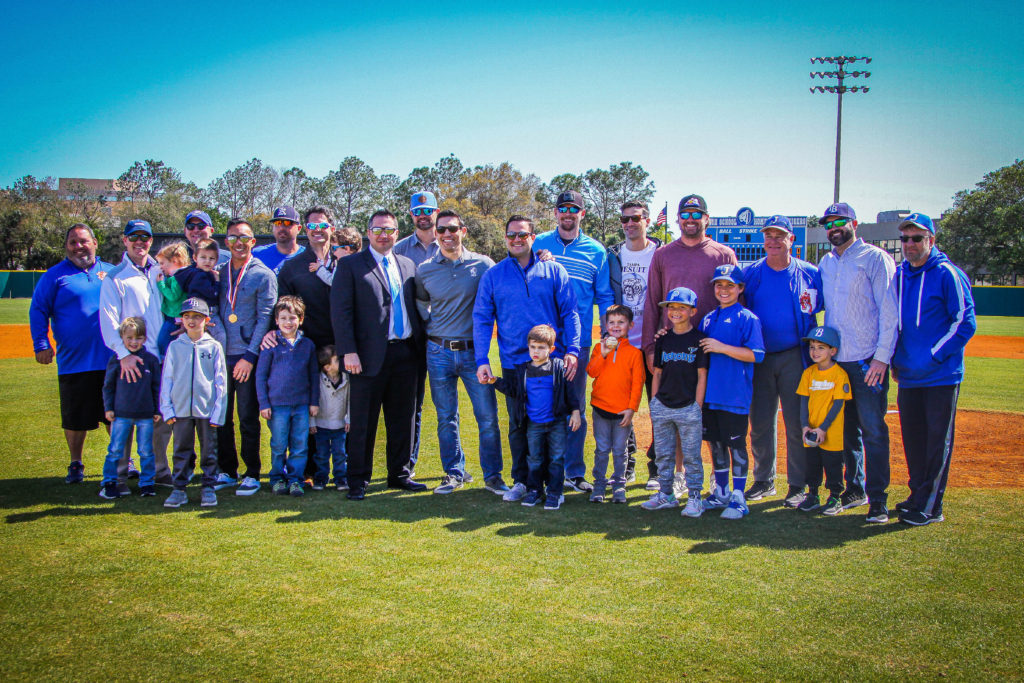 TAMPA — When it comes to high school athletic programs, many can count the number of state titles on one, possibly two hands. And even then, it generally means there’s that one coach — the local legend — the overseer of said program, earning that always-open reservation at the nearby popular restaurant.

Rarely does a high school, not only athletic program, but a specific sport boast not one, not two, but THREE coaches who have guided different teams — with different players — to state championships.

But, then again, here we are talking about Jesuit Baseball and its incredible legacy.

“We talk about it all the time with our guys,” current Tigers baseball coach and 2019 State Champion Miguel Menendez said, “on what you want your legacy to be. How do you want to leave your mark here? Well, (2019) will always be up on the scoreboard, so, to me, that’s something very special.” 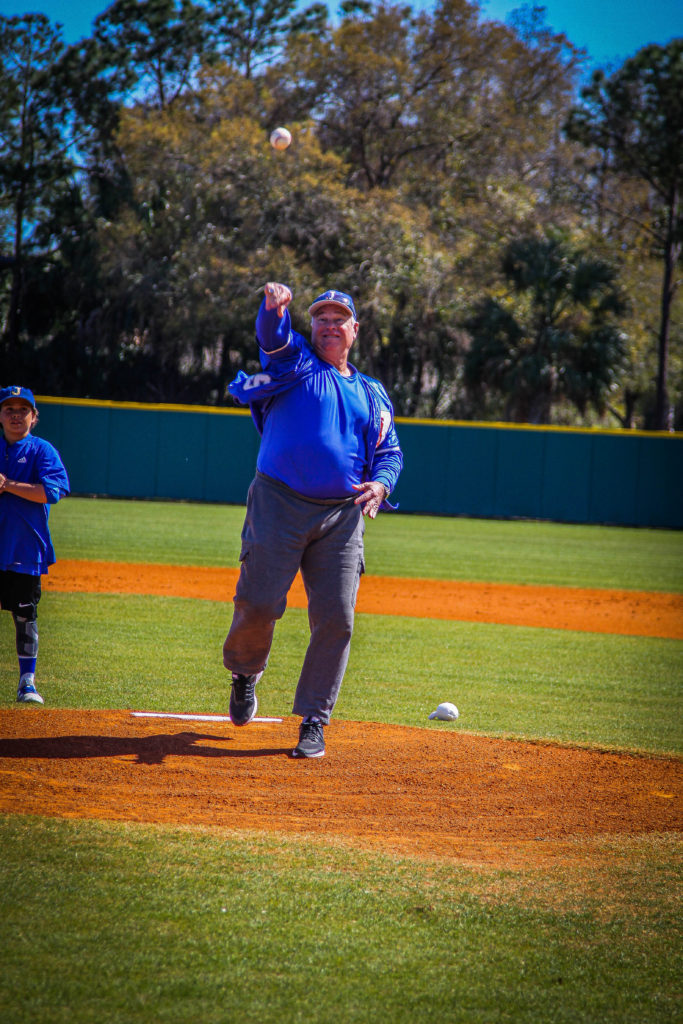 And Menendez is part of something special. He’s just one of a trio of baseball coaches that have won state titles for the Tigers. He joins FHSAA Baseball Hall of Famer John Crumbley and his former player, Richie Warren, to round out five state titles (‘94, ‘97, ‘00, ‘14, ‘19) Jesuit has won on the diamond.

“Crumbley is a legend around the area and, of course, here at Jesuit,” Menendez said. “So anytime to be put in the same conversation as him, it’s pretty special. Richie did a great job here, too, so to be in company with those guys is something very special to me.”

On Saturday, Menendez, along with Crumbley and Warren, were all together at Paul Straub Field at Hyer Family Park to celebrate the 20th Anniversary of the 2000 State Title Team led by Crumbley and featuring Warren as a senior pitcher as part of a team that took home the title that year less than a mile away at then Legends Field.

Of course, the legacy continues, as Crumbley would coach on until 2006 until handing the reins over to Warren starting in 2007. While Crumbley would serve as the Jesuit AD until he left to start the Steinbrenner baseball program he still coaches in 2010, Warren would eventually lead the Tigers to the Class 5A title in 2014 before moving on to become Berkeley Prep’s baseball coach.

“To follow a legend like Coach Crumbley — someone I look up to and adore as a human being and a coach,” Warren said, “to follow in his footsteps, continue the legacy, pouring in so much time and energy and love into this sport, into this program — it means a lot to be in that group.” 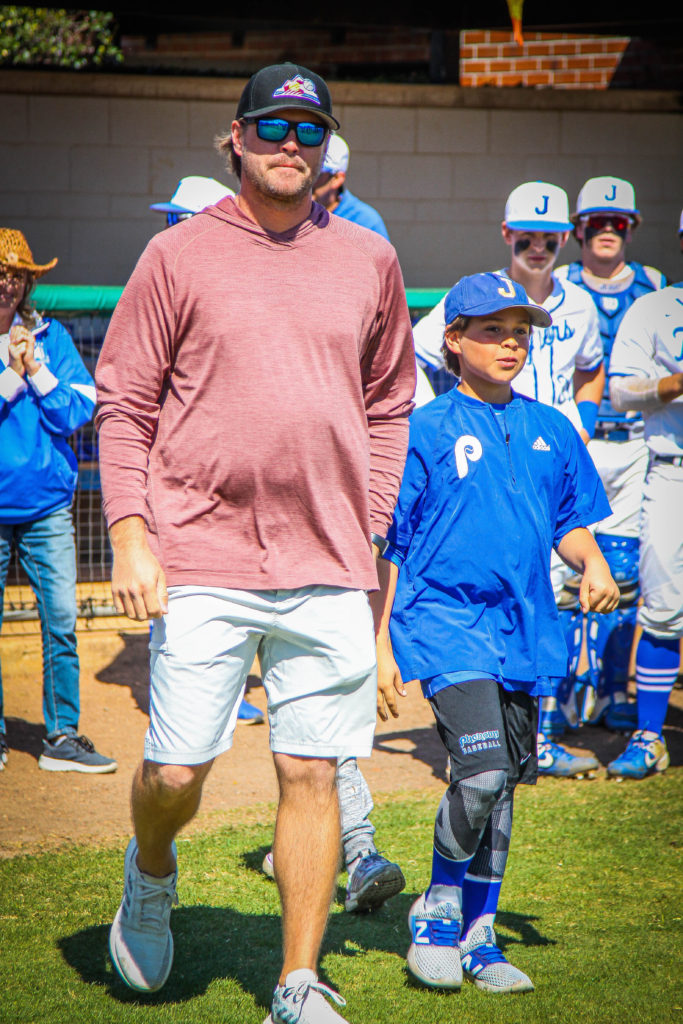 “Anytime you’re given a chance to be a part of (a legacy) like that,” Warren added, “it’s special, but I’m such a small, small part. As a player, I had a small role and as a coach an even smaller one. There are 20 guys that are playing, and when you’re playing, you’re part of a team driving forward all to the same goal, but as a small piece, you love being a part of that legacy. Just seeing my boys, as I come back here, and they ask questions about it all — that makes it even more special.”

With about a dozen or so of the players on hand Saturday, Crumbley said he now is able to keep tabs on how his former players are doing thanks, in part, to Facebook, but still speaks with Warren quite a bit since they are still Hillsborough County coaches.

“It’s awesome,” Crumbley added. “In my 25 years here at Jesuit, I had some amazing teams. My son got to come here and play and graduate here, so I wouldn’t trade that for anything.

“They do it right here at Jesuit, always have. Obviously, I’m close with Richie and I know Miguel well as a competitor, so, like baseball, (being a part of that group with them) is a beautiful thing.” 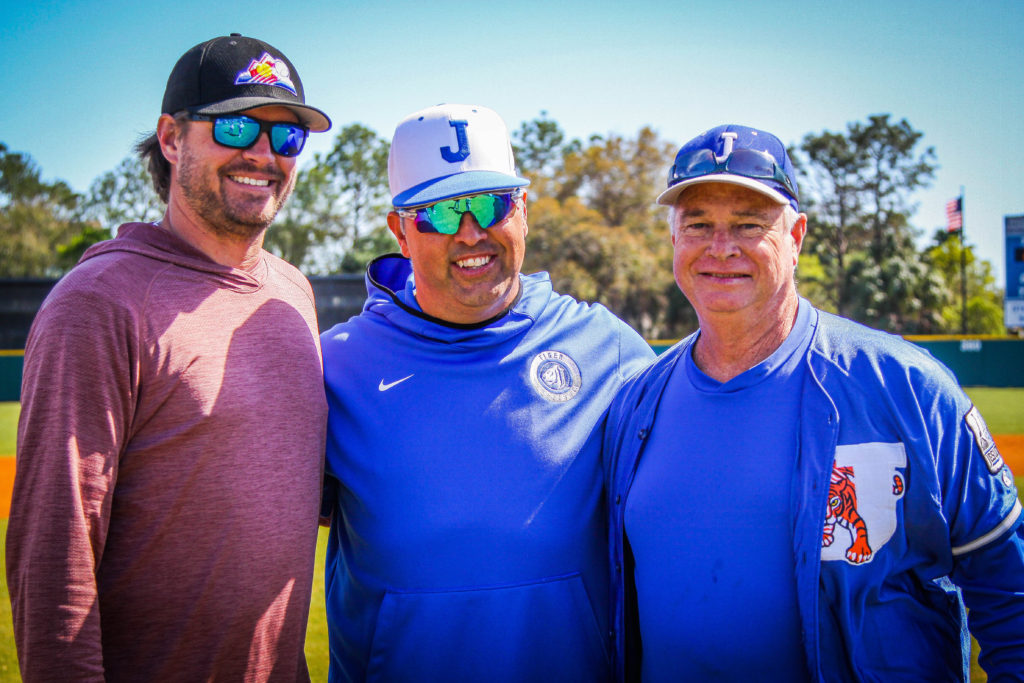 The three coaches who have led Jesuit Baseball to its five state champions: (left to right) Richie Warren, who also was a part of Jesuit’s 2000 state title team as a player, current Tigers coach Miguel Menendez, and Hall of Fame coach John Crumbley, who led the Tigers to three titles (photo by Mike Camunas).

Menendez, now in his sixth season, is 118-37, including 4-0 this season following a 11-7 win over Orlando Bishop Moore on Saturday. During Jesuit’s historic title run last spring, the Tigers outscored postseason opponents 55-14 and have outscored 2020 opponents 43-9 thus far.

“Knowing that we’re the three coaches that won state championships — I didn’t really think about it until now,” Menendez said. “It gives me goosebumps thinking about it.”

“Everyone had us a .500 team (in 2000),” added Warren, who was also the winning pitcher in the state semifinal game that season. “In the semifinal, we were down to the last strike — improbable stuff that needed to happen happened, but that’s the best thing about high school sports: you’re never done until you’re done — the power of us or these kids to make something happen, something special.

“It’s what keeps me loving my job every day.”

And that most likely keeps Crumbley loving his job to this day in a decades long storied career that now has more than 750 wins.

“I was fortunate enough to get hired at 22 and last as long as I did, and have great kids and great coaches around me,” Crumbley said. “If anything, I just wanted to have a passion and dedication to coaching and work hard to put the best product out there — to make the young men into the best human beings as I can.

“I think that’s a great legacy.” 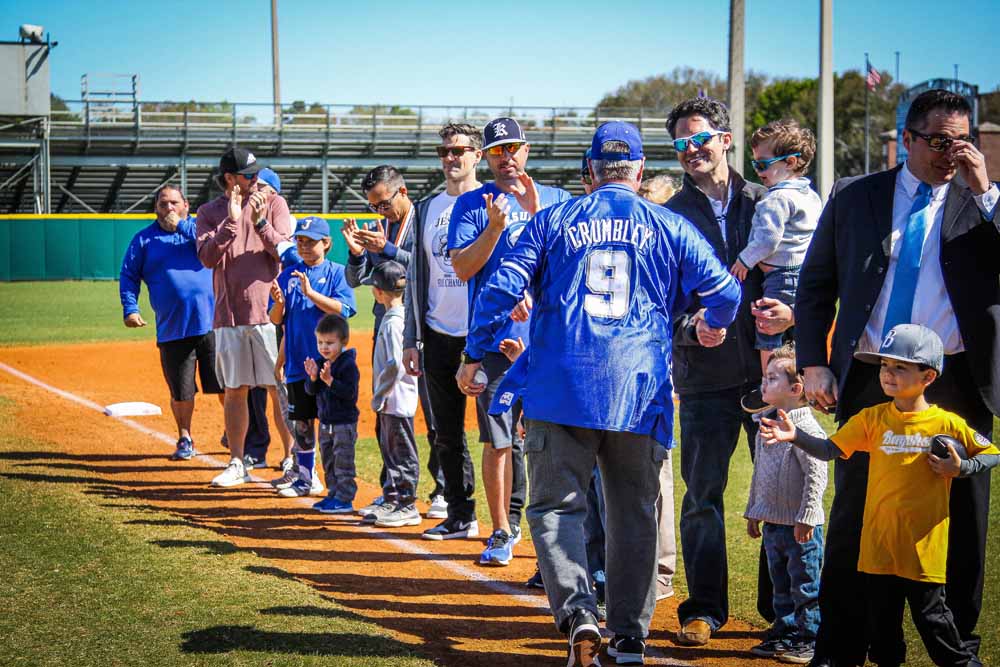