Staff Message: Coaches, our team of area track and field coaches bring you coverage on a weekly basis and hope to highlight as many athletes as we can. But your participation with the coaches  already dedicated to producing these articles is needed. From results, to photos, to getting us in contact with your players, we need your help. You can tag us on Twitter: @813Track (click here) with potential story ideas or email our coverage coordinator at Benjamin.J.Henderson@gmail.com 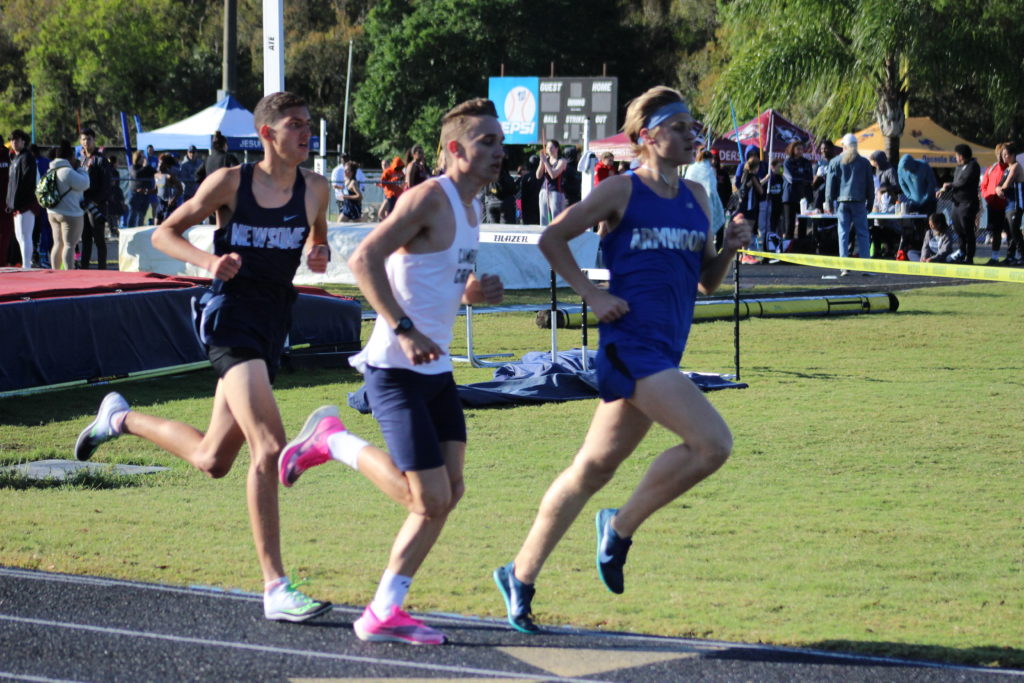 NEW TAMPA – Cooler temperature early made it another banner day for Hillsborough County distance runners while windy conditions later on made it a tough day for the sprinters at the Wharton Invitational. IMG Academy won the meet easily on both the boys and girls side while Newsome took the runner-up spot on both sides.

In the boys competition, much like last week at the Steinbrenner Invite, the boys 3200 provided one of the fastest races of the day. Reed Legg of Cambridge Christian won the race in 9:15.62 and was part of 14 boys that broke 10 minutes in the race (four were from Newsome, three from Plant, three more were from Seffner Christian, and Jake Turner from Armwood was second in 9:22.90).

“It was perfect weather out here,” Legg said. “After the first mile I started dropping the pace down a little bit. I felt good.”

To this point, 64 boys in the state of Florida have run under 10 minutes in the event. Nineteen of them are from Hillsborough County.

The gusty winds throughout the day didn’t stop some big-time performances in the field events either. Anson Rowe of Jesuit set another lifetime PR in the vault by clearing 4.46m (14’ 7.5”). He was pushed to the end by Tampa Bay Tech’s Michael Hopkins, who also had a lifetime best with a vault of 4.33m (14’ 2.5”). This was Hopkins first pole vault competition of the season.

Zach Godbold of Wharton continues to be untouchable in the javelin. In his second javelin competition of the season, Godbold launched the spear 55.15m (180’ 11.25”) to win the event by 55 feet. Godbold also leads the entire state in all classifications by 6.53m (21 feet).

Wharton had an impressive debut from senior OC Davis, who in his first ever official competition, had a mark of 14.28m (46’ 10.5”) to come in second in the shot put, and is now ranked in the Top 20 in the state for 4A in the event.

Once the meet switched to the track, the sprinters were faced with a strong and constant headwind throughout the meet. Johnnie Dorris of East Bay fought through a 4.8 headwind to win the 100-meter dash in :11.24 over IMG’s Austin Kresley by .17. Kresley came into the meet with the state’s 17th-fastest time and when adjusted for the wind, Dorris’ time would equal a 10.80, which would be 9th in the state for 4A.

“We knew the times weren’t going to be great so we just wanted to compete. (Dorris) has become really focused his senior year,” said East Bay head coach Josh Herman.

In the girls competition, Newsome led the way for Hillsborough County thanks in part to the one-two punch that Keleigh Scallon and Emma Solis provided. Scallon, currently ranked third in 4A in the 800m, won the event with a time of 2:16.96. She then doubled back to come in second in the 1600m in 5:15.90.

Wolves Kylie Clark remained undefeated this season in pole vault. The junior, currently ranked first in the state for 4A, cleared 3.61m (11’ 10.25”), just .05m short of her lifetime best.

In the sprints, East Bay’s Alania Hall joined her classmate Dorris as the top performer from the county in the 100. The senior, who is heading to Bemidji State University this fall, came in third in the event by running :12.79 into a 3.9 headwind (adjusted to 12.34). The adjusted time would have her 12th in the state in the event.

Hall was also the top finisher from the county in the long jump. The state runner-up in the event from last year jumped 4.83m (15’ 10”) for a season best mark that earned her fourth place.

Alonso’s Shaniya Benjamin continued her dominance. She remains undefeated this season in the 200m after running a season best :25.53 despite a 5.1 headwind.

Hillsborough came in fifth with 47 points.

TAMPA – It wasn’t quite the 107-point victory they delivered last week, but Berkeley Prep boys won’t complain after winning their second straight invite, this time at home over 25 schools.

Logan Guzik led the Buccaneers effort with two second place finishes in the 110M and 300M hurdles. His time in the 300 was :40.21 and it broke a 33-year old school record. He now sits first in the county in the event and seventh in the state for 2A.

“We’ve been waiting and hoping for this record to go down,” Berkeley Prep coach Erik Lipham said. “The old record of :40.33 was set in 1987 and we’ve had several come within a tenth of a second. (Logan) ran a pretty clean race, especially the last hurdle and it helped that he was chasing someone.”

Markus Bynum had a short, but efficient day for Berkeley Prep in the pole vault. The senior won the event with a clearance of 4.00m (13’ 1.5”). Bynum cleared all three heights he attempted (3.70m, 3.85m, and 4.00m) on his first attempt before calling it a day after having secured first place. It marks just the second time Bynum has cleared 4.00m. Bynum also chipped in with a third-place finish in the discus with a toss of 37.13m (121’ 10”).

“Michael Jones is having a great season,” Lipham said. “His 26 points were the result of hard work and dedication, countless hours in the weight room, but more importantly the time he spends breaking down his throws and form to make himself the first Berkeley athlete to eclipse the 50-foot mark.”

“Our boys team is big, deep and talented this year,” Lipham said. “Going in we thought we had a chance to win, but we knew that there were several great programs including Steinbrenner, Auburndale and Admiral Farragut we would have to get around. Overall, the coaches are very proud of how the team comes together and supports one another.”

Speaking of Steinbrenner, the Warriors boys were second with 74 points despite a condensed squad that left most of ITS sprinters and throwers at home. The Warriors still featured a couple of their bigger stars, as Aidan BItter won the 110m hurdles with a season best :14.66 (though he was aided with a 4.5 tailwind). Bitter also won the long jump with a mark of 6.82m (22’ 4.5”) and the high jump by clearing 1.92m (6’ 3.5”) on his first attempt.

Steinbrenner got a school record from Josh King in the 3200m, when the senior set a meet and stadium record as well when he completed the eight laps in 9:27.04 to win the event over Berkeley Prep’s Ethan Lipham (who ran 9:39.64).

“I’m not sure he planned to run (a school record) as it was a bit chilly and windy (during the race),” said Steinbrenner head coach Tyson Graham.

Robinson came in fourth with 57 points. Ethan Geiger continued his distance dominance with a win in the 1600m in a time of 4:18.92 to break Rolf Steier’s 18-year old meet record.