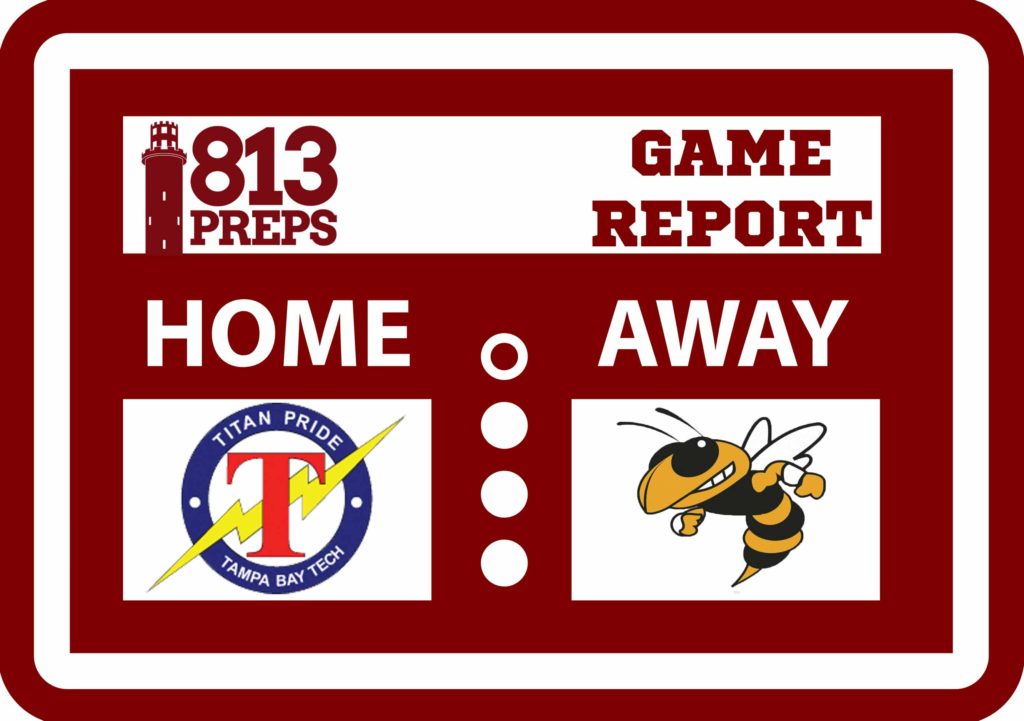 TAMPA – The Tampa Bay Tech Titans came out firing on all cylinders offensively Tuesday night after going down 3-0 in the top half of the first as starting pitcher Evan Mobley couldn’t quite find his stride. However, his teammates had his back as they came back and scored six in the home first and never looked back from there, taking down Blake, 12-3.

The Yellow Jackets (0-5) came into the Titans’ home field looking for their first win of the season but the TBT, which also entered the game in search of the season’s first victory, got the production needed to get it done.

Blake scored the game’s first with three runs as Titus Woods-Ayers knocked in one with a base hit into right, followed by a couple of wild pitches from Mobley that scored two more. The Titans were ready to retaliate, dropping a six-spot on Blake’s starting pitcher Josh Dunbar, started by an RBI double from Tyler Shultz, and quickly followed by a bases clearing triple from Jaxson Smith.

When asked about how he felt about starting the offensive momentum in that six run first innings, Shultz said, “It feels good to lead the team and help the team win.”

After a scoreless second inning, Jeremiah Fuertes came through with a two-run base hit into left which PUT the Titans ahead by five. In the top half of the fourth, after recording one out and walking a couple of batters, the Titans skipper Brett Goodrich pulled the plug on Evan Mobley, who had nine strikeouts in just 3 1/3 innings while only allowing three runs. Goodrich brought Tyler Shultz to the mound, and he continued to help out his squad by going 2 2/3 innings scoreless with three strikeouts.

Jeremiah Fuertes lead the way offensively for the Titans as he went 3-for-3, with two runs and two RBIs.

“During pregame I was just starting to feel the bat a bit better, just loosen my hands, and stopped being tight,” Fuertes stayed. “I really worked on looking middle-away every pitch.”

The rest of the game was pretty quiet for the visiting Yellow Jackets, while only recording two more hits after the first. All while the Titans kept putting pressure on them with four more late runs capped by Evan Mobley and Jason Miranda’s RBI singles in the fifth inning.

“I think it’s going to take a lot of pressure off of the boys,” head coach Brett Goodrich said about his team’s first win. “I’ve been preaching just put the ball in play and things will happen, and we saw that tonight.”

TBT (1-4) will take its victory into its next game, a district meeting with defending state champions Plant City squad at home in their next game.

As for Blake, the Yellow Jackets also take on a reigning state champ, the Jesuit Tigers at home in their next matchup on Thursday.