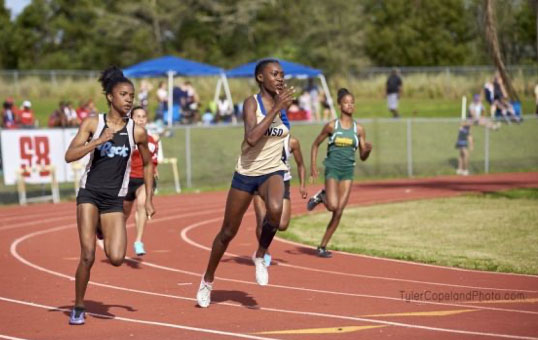 Alonso senior Shaniya Benjamin (center in gold jersey) is a multi-event standout and leader for the Ravens (photo courtesy TylerCopelandPhoto.com)

TAMPA – The Alonso track team’s motto is “Raven’s don’t blink,” though, when senior Shaniya Benjamin is running, the motto is good instruction for spectators as well.

The USF signee is continuing her tear on the track which began at the age of eight, when she began her career as an AAU athlete. Dubbed “a true student of our sport,” by Ravens coach Roger Mills, Benjamin’s career has not only been lengthy but multi-faceted. She is currently ranked in the top ten in the state in Class 4A in three events, highlighted by her No. 2 listing in the triple jump, an event where last season Benjamin was the bronze medalist at the state championships in Jacksonville.

“You could ask her about the discus or the 1600 and she would be able to tell you a great deal about both events, as well as many others,” Mills said.

Mills also mentioned that if she were given ample time to train for most any event outside her current scope, “she would compete with the best there, too.”

Benjamin’s range is definitely wide-reaching, but her desire to do more than just run and jump is just as impressive.

“I’m excited about competing for USF,” she said. “But the main reason I chose South Florida was their medical program.”
When asked what made her decide on a career in the medical field Benjamin replied, “I want to be able to help people, to make a difference in a bigger way.”

Her desire to put others first was also evident on the track. As one of her more rewarding experiences in her high school career, Benjamin remembered a time when her Alonso relay had a comfortable lead, only to lose the race as the Raven’s anchor leg was overtaken in the final stretch. The runner was visibly dejected and blamed herself for the defeat, but Benjamin recalls  encouraging her teammate, telling her to, ”keep your head lifted, there will be another race!”

Benjamin also points to a rivalry, of sorts, with former Gaither standout LaSarah Hargrove, former Steinbrenner sprinter Ken’naria Gadson, and current Warrior Zayne Jack as a highlight of her career to this point.

“It wasn’t like a rivalry where you didn’t like each other,” Benjamin said. “We were friends and enjoyed competing against each other.”

Many track meets would find the mothers of these three runners in the stands together, cheering on each other’s daughters.
As the 2020 track season presses on and the meets get more important with regional and state qualifying at stake, you can be sure that as the starter’s pistol is raised and the runner’s ready themselves, there will be one speedster on the line, focused on the journey ahead, with no blink in sight.

Jesuit pole vaulter Anson Rowe set a new personal best with a vault of 14’8″ this week and now ranks No. 1 in Class 3A(all photos courtesy of Jesuit High School Athletics). 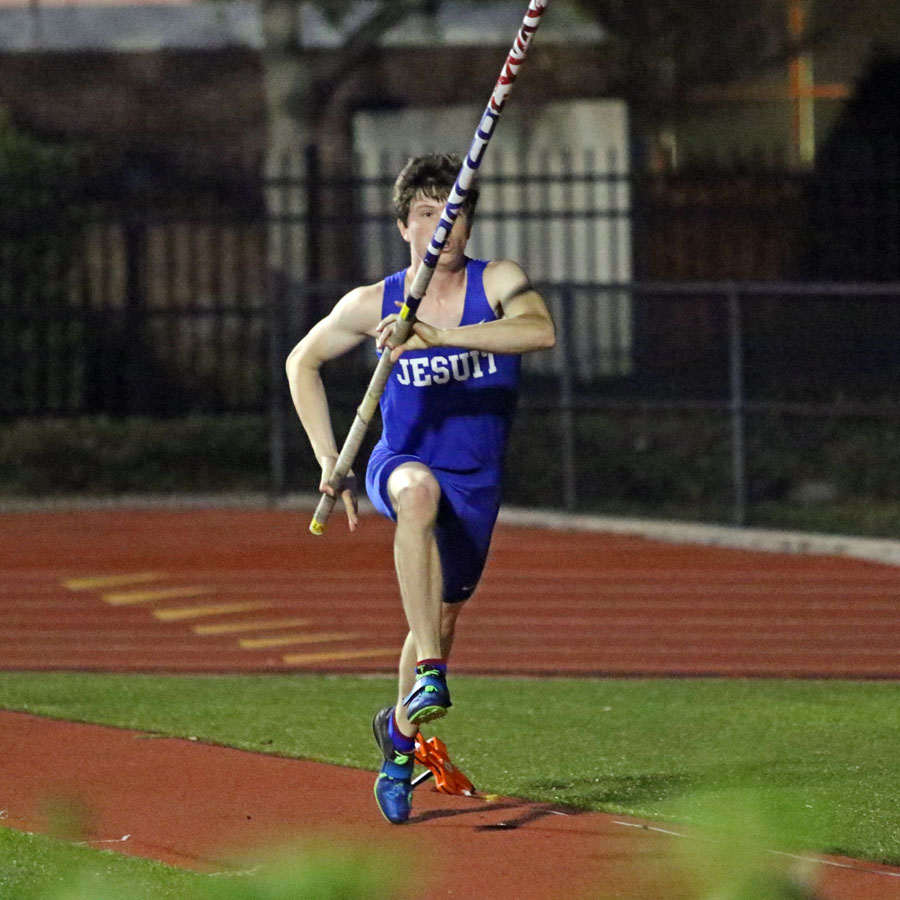 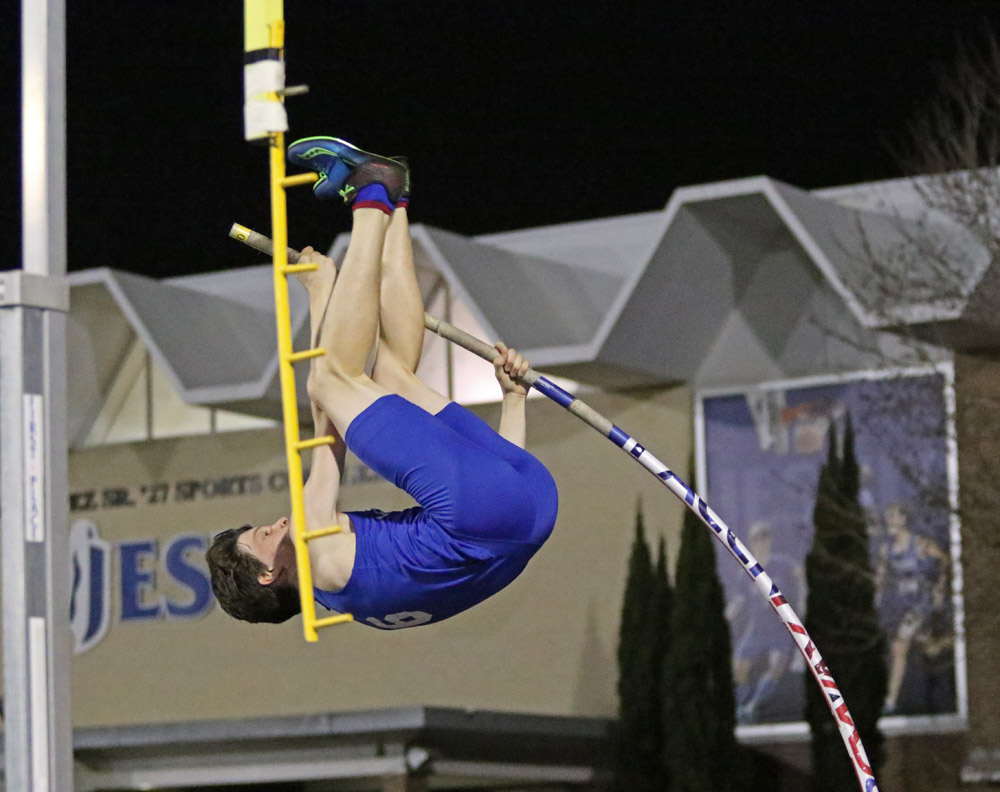 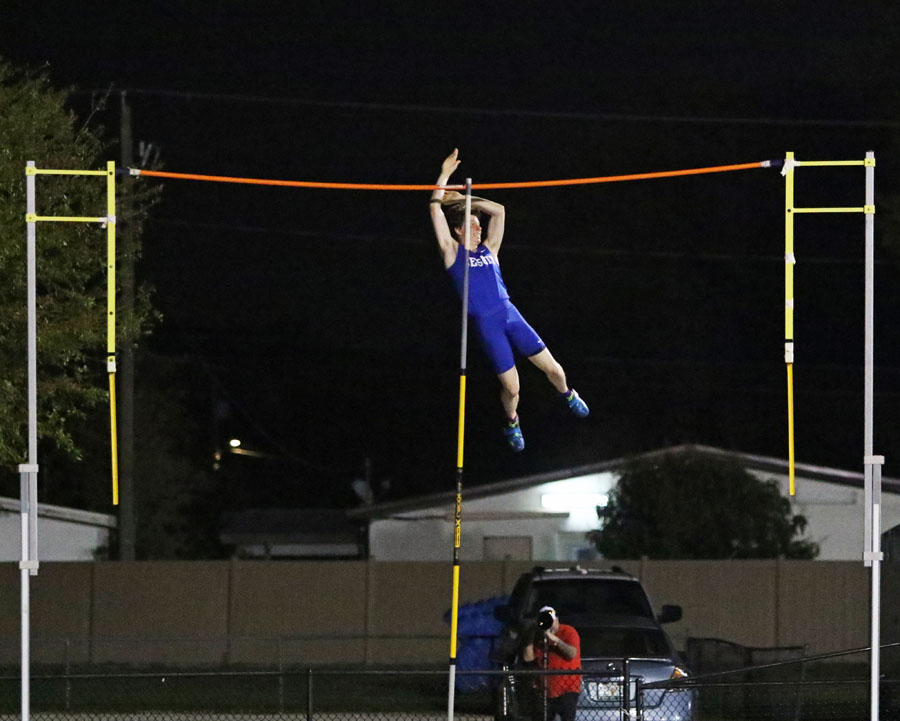 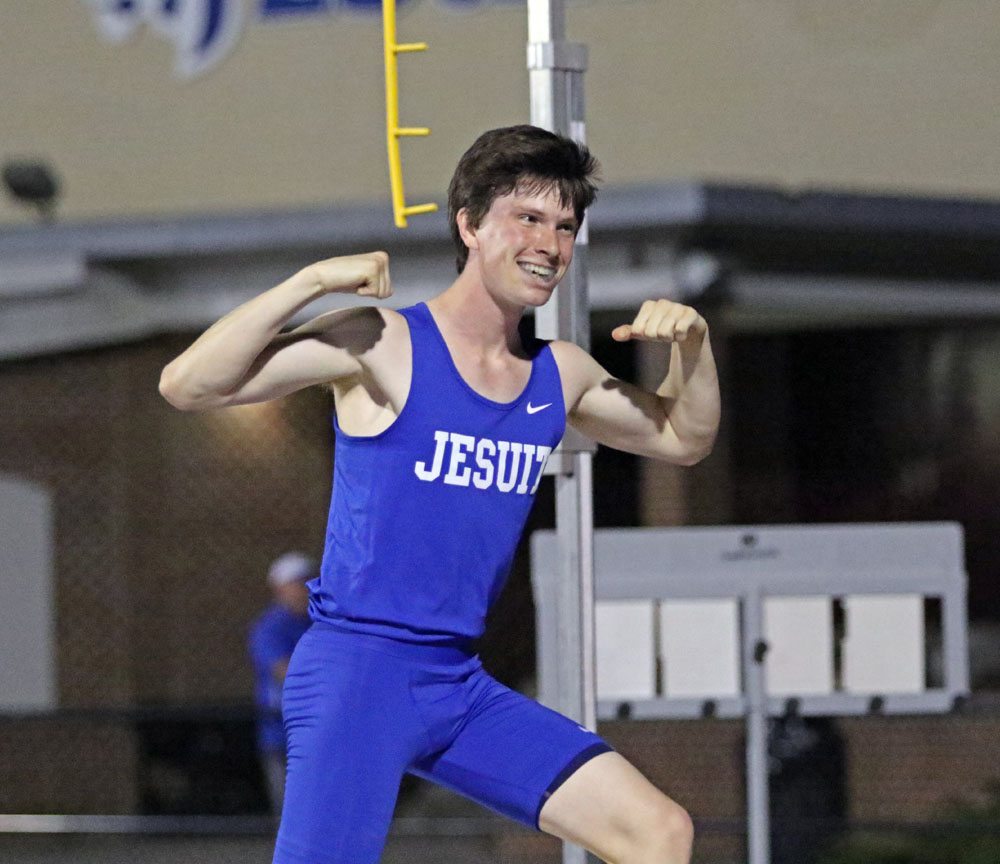 News and notes from Western Hillsborough track and field: At the Monday Morning Madness meet at Alonso, the Gaither boys won all but three of the running events, including PRs in the 100m & 200m by Derrick Jackson and a 1600m/3200m double victory and a PR in the 3200m by Lorenzo Martinez. Gaither’s Jaylon Gardiner, in only his second appearance on the high jump apron, leapt to a mark of 1.77 meters, a slim one-hundredth of a meter from the district lead … Steinbrenner’s Josh King set out to claim the Warrior’s school record in the 3200m, and he did just that on a windy day at the Berkeley Prep Invite this past Saturday. His 9:27.04 ranks him third on the 4A state list … Alonso’s Sowande Walker came close to his 2019 state silver medal throw in the discus with a toss of 49.58 meters, planting him at the No. 3 spot in the 4A state rankings and the county leader.

News and notes from Central Hillsborough track and field: Jesuit ran away with the boys competition at its home meet on Wednesday topping Hillsborough and Chamberlain on the boys side and the Hillsborough girls finished ahead of Academy of the Holy Names (second) and Chamberlain at the meet … Last Saturday at the Wharton Wildcat Invitational, the King Lions had to make a last-minute decision when one leg for girls 4×400 relay became unavailable. Not missing a beat, King coach Gary Bingham substituted a pole vaulter, D’nysha Brightful, to run the anchor leg and the team went on to win the event in a time of 4:23.11. 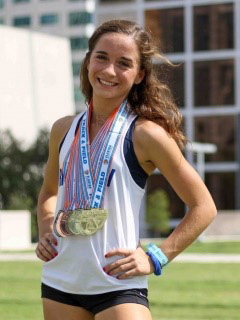 Riverview’s Alyssa Hendrix (Photo provided by Will Turner of WTurnerProductions.com)

News and notes from Eastern Hillsborough track and field: Riverview’s Alyssa Hendrix ran unattached on Friday in the 5K at the Tampa Track Classic at the University of Tampa. The senior ran a PR of 16:53 to win the race over 53 college competitors. Hendrix’s time ranks her fourth on the all-time list for 5K on the track in Florida … Bell Creek continued their success this season at the Richard Allen Invite at Pinellas Park High. Angel Parks helped the Panthers to a second-place finish by winning the 100 hurdles (16.55) and the 300 hurdles (48.72). Bell Creek also won the 4 X 800 with a time of 10:10.60. Bell Creek girls currently is ranked third in the state for 1A … Jeremiah Exceus of East Bay had the best jump of his life at the Wharton Invite. The sophomore cleared 1.80m (5’10.75”) to win the high jump despite being seeded eighth going into the meet … On Tuesday, Strawberry Crest, Plant City, and Durant took part in their second annual Strawberry Festival Showdown. Plant City won the boys meet while Strawberry Crest won the girls competition. The best performances of the night came at javelin, where Jackson Knotts of Plant City almost had a PR when he threw 44.07m (144’ 7”). He is currently ranked fourth in 4A for javelin. Haley Keifer of Strawberry Crest shot up the state javelin leaderboard when she had a PR of 28.75m (94’ 4”), which is now ranks her at No. 11 in 4A. 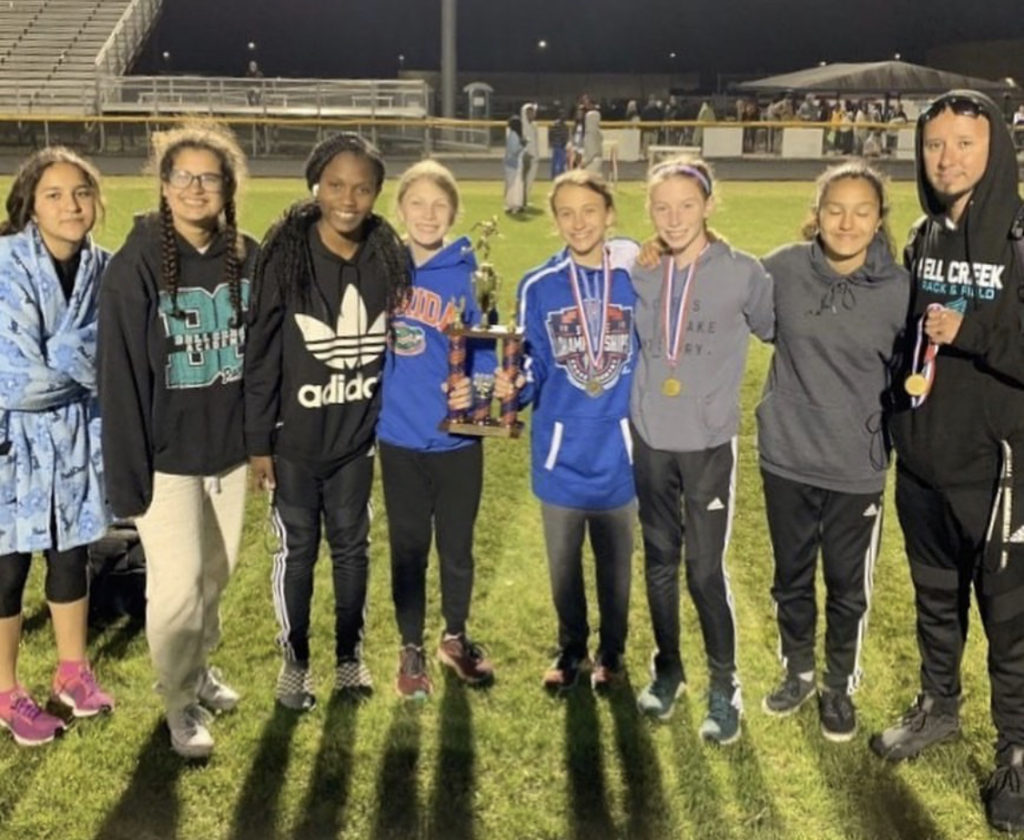 Editor’s Note: These rankings are based on athlete rankings in the county that go 16 places deep. If an athlete is ranked first in the county, they get credit for 20 points. An athlete ranked ninth earns 10 points (all the way down to one point for 16th). This is in an effort to reward all around team depth vs having a couple of studs. Rankings accurate as of 3/5/20.

Boys:
1. Jesuit (267 Points) – Fifth place finish at the Wharton Invite, but then winners of their tri-meet over Hillsborough and Chamberlain. Bennett Anderson had a PR in his season debut in the 300-meter hurdles (41.41) and a PR in the high jump (1.88m/6’ 2”) to catapult the Tigers into the top spot.

2. Steinbrenner (248 Points) – The Warriors were runner-up at Berkeley Prep despite a condensed squad. Josh King set the school record in the 3200 by running 9:27.04.

4. Newsome (236.5 Points) – Runner-up at Wharton Invite behind IMG Academy. Naeem Prater can score in both the hurdles and in the triple jump.

5. Berkeley Prep (204.5 Points) – Winners of their home invite. The Buccaneers have perhaps the strongest trio of point scorers with Markus Bynum, Michael Jones, and Logan Guzik.

Girls:
1. Newsome (256.1 Points) – Second at the Wharton Invite behind IMG Academy. Denver Wilkins and Margret Jones continue to chip in big points in the high jump.

2. Steinbrenner (254 Points) – Fourth place at the Berkeley Prep Invite. Deborah Marlow was the top finisher from Hillsborough County in the 100m when she finished fifth out of 116 at Berkeley Prep.

3. Hillsborough (249 Points) – Jazmyn Ward went 11m (36’1”) in triple jump at the Jesuit Quad Meet to claim the top spot in the county and very nearly put the Terriers in the top spot as a team.

4. Wharton (245.5 Points) – Fourth place at their own invite. The Wildcats have nearly claimed the top spot themselves thanks to the strength of all three relay teams. Wharton is the only team to be ranked in the top 5 in the county for all three. 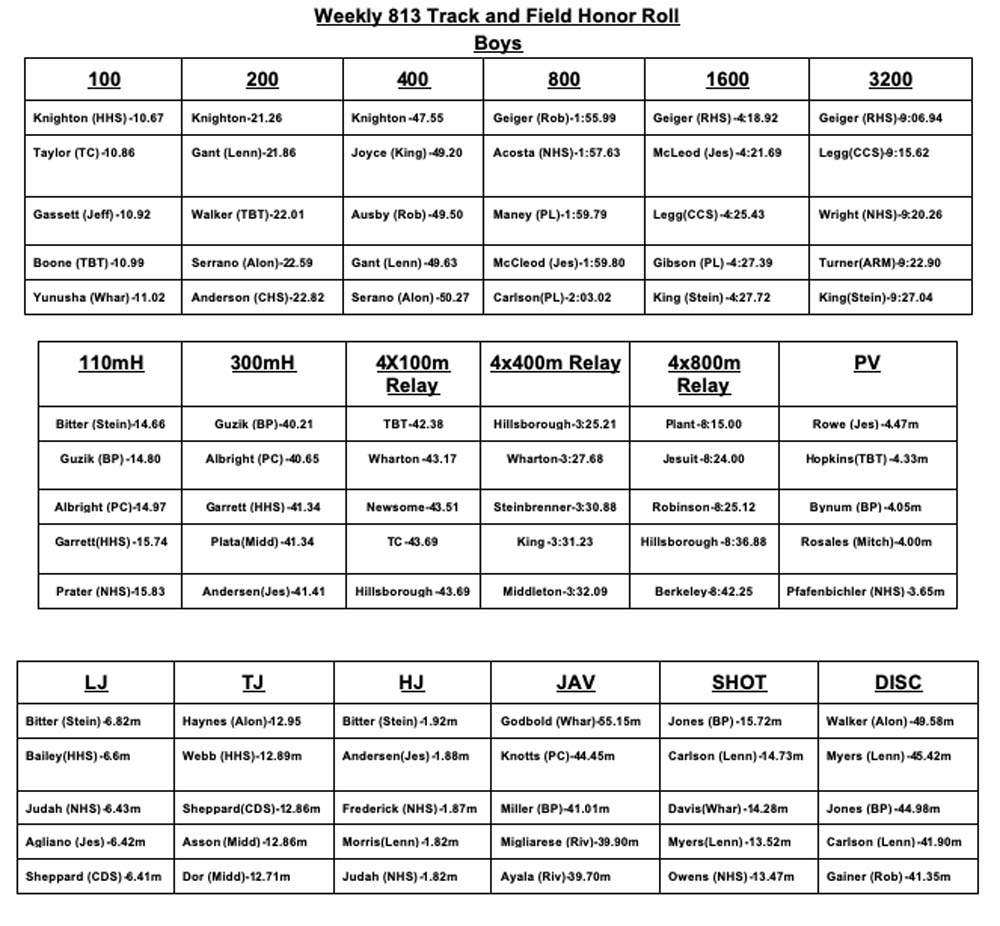 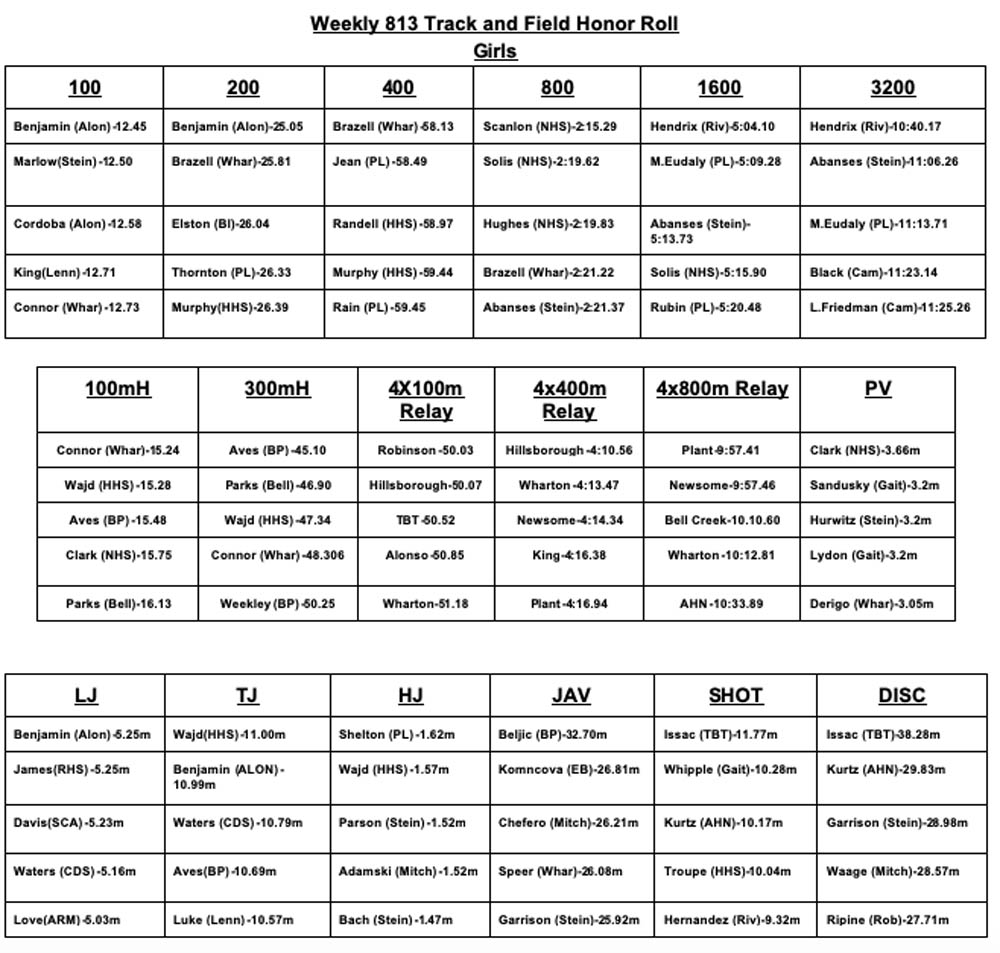