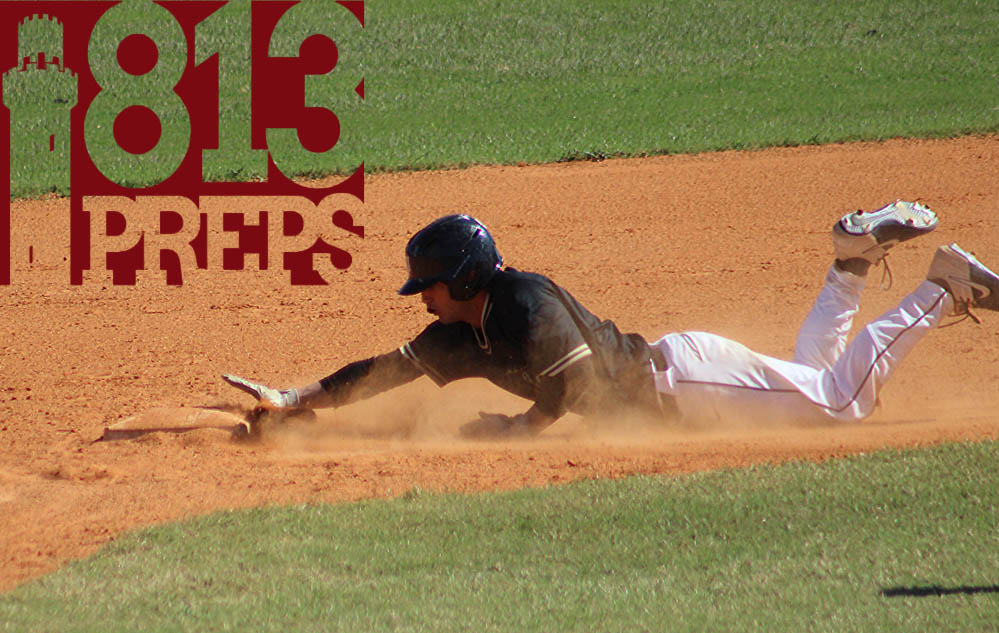 Plant junior Matthew Ward slides into second after his RBI double in the second inning. The run proved to be the decider in the Panthers 6-2 win at Jefferson on Saturday.

TAMPA – Prior to Saturday’s chilly morning game at Jefferson, Plant head coach Dennis Braun said the Panthers were looking to find a little more consistency on the mound. Steady and consistent was what the Panthers skipper got from junior Dan Fields, as the righty mixed in a two-seamer with his fastball and slider, keeping Jefferson out front for four innings and earning his first career varsity win as Plant defeated the Dragons 6-2.

“I threw strikes, my defense played well, and we put some runs on the board and got up early,” Field said. “We played well today, got hits, it was all good.” 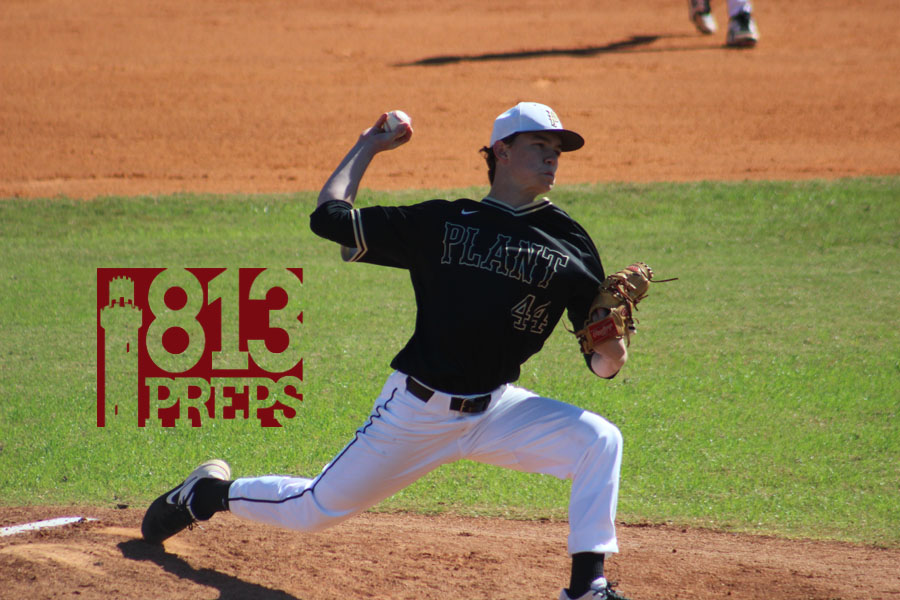 Plant (5-3) gave Fields a lead quickly when senior Reece Blanco singled to score Conley Strayer in the first, and padded the margin in the second when Strayer drove in a run on a sac fly and Matthew Ward doubled in another.

“I was trying to get in a good count, look for a pitch to drive and get through it,” Ward said, “and I did the job on that one.”

From there Fields plugged away facing the minimum through the first two, before Jefferson (2-7) finally got to him in the third when Yadiel Perez hit an infield single, advanced on an error and scored on a hard-hit single up-the-middle from Javier James. 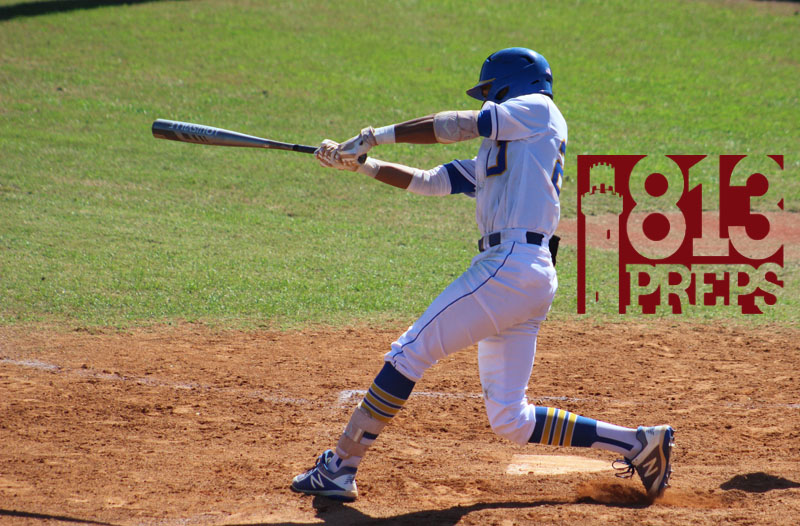 Fields limited the damage and worked around a walk and single the next inning, picking up two of his three strikeouts to wrap up his day.

“That’s what we needed today with a few pitchers out,” Braun said. “We needed someone to step out here and get us out of the gate … that was nice to see.” 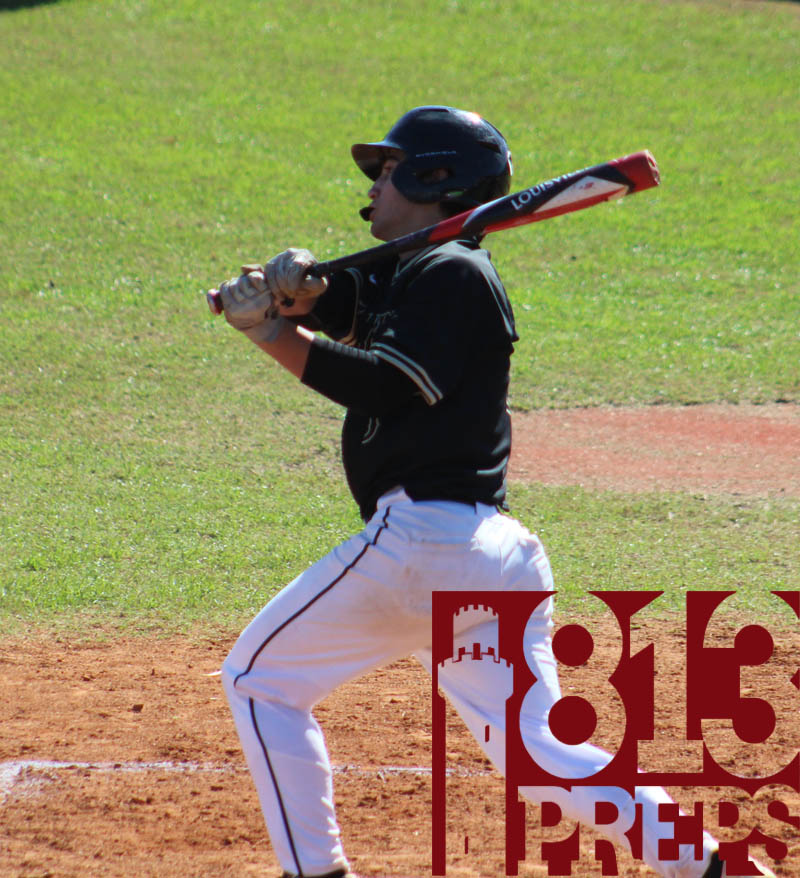 Matthew Ward doubles in a run in the second. 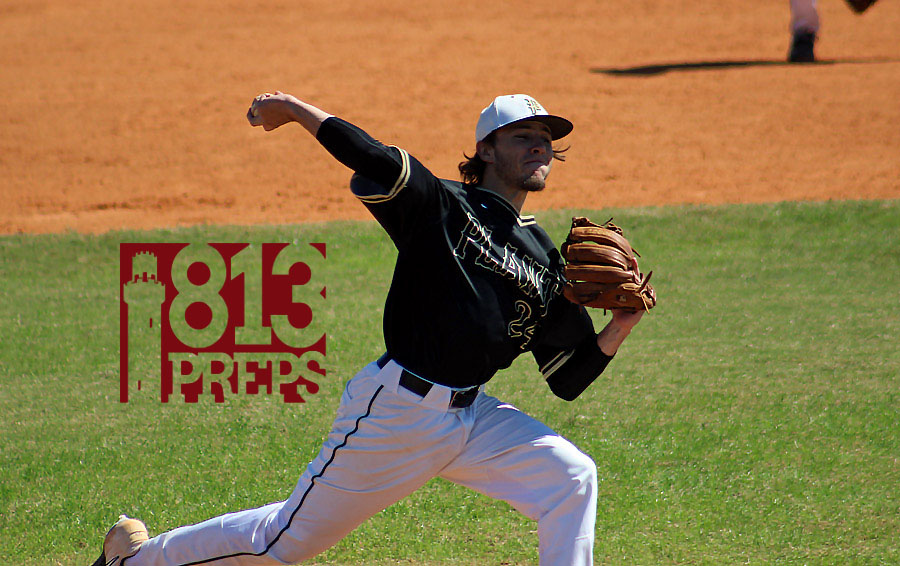 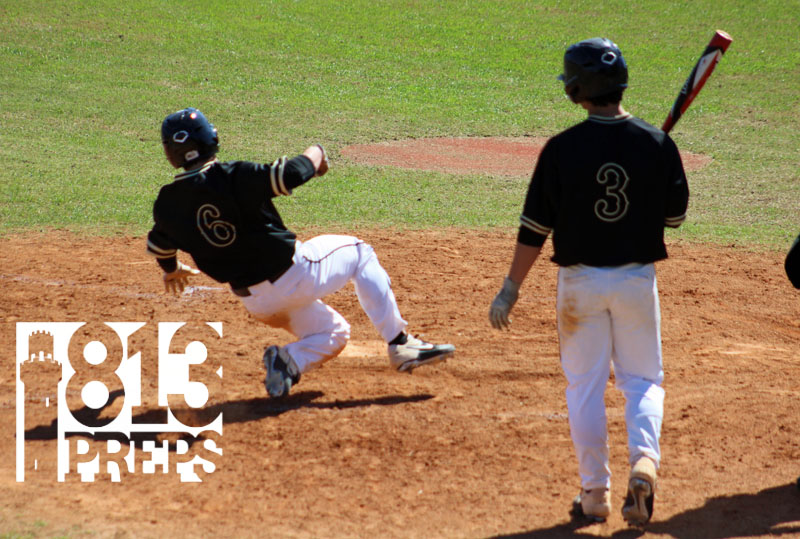 Plant’s Nick Lee scores on a passed ball in the fourth inning. Lee had three stolen bases and scored twice in the win. 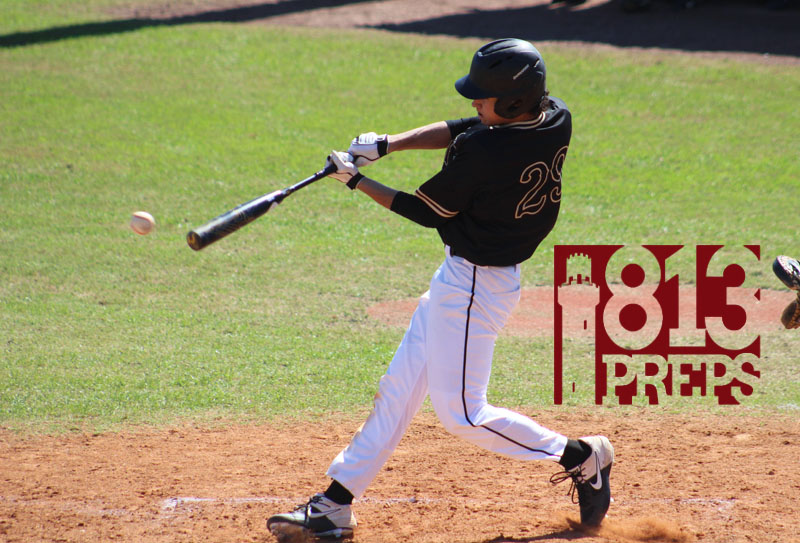 Conley Strayer makes contact on an RBI sac fly in the second. Strayer also walked twice and scored a run.

Plant was aggressive on the bases all day, swiping 10 bags, taking advantage of four passed balls and two wild pitches. The bottom of the Panthers lineup played a huge part in this as Carlos Santa Cruz and Nick Lee each were 1-for-2 in the game, both scoring twice and stealing three bags apiece.

“That’s their job, to get on base and we know they can run a little bit,” Braun said. “We took advantage of some things today, but when those guys get on and our leadoff guys come around that’s a good thing for us.”

Ward added some insurance later in the game with a second RBI on a sac fly to center for the Panthers.

“It felt great,” Ward said. “We needed a spark, some energy from our offense and we got that today.” 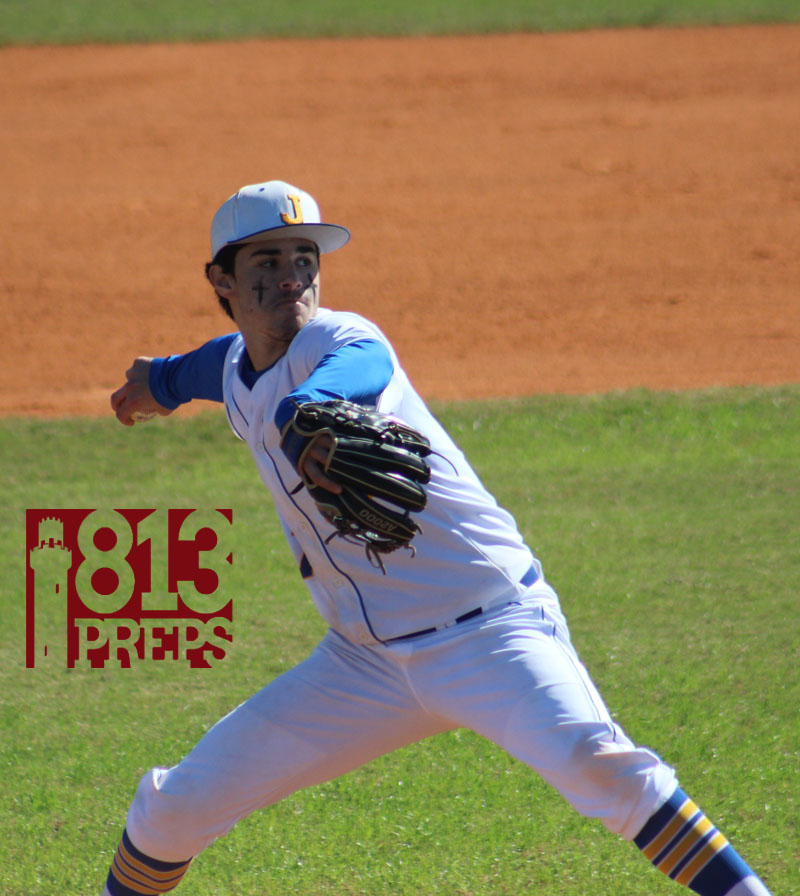 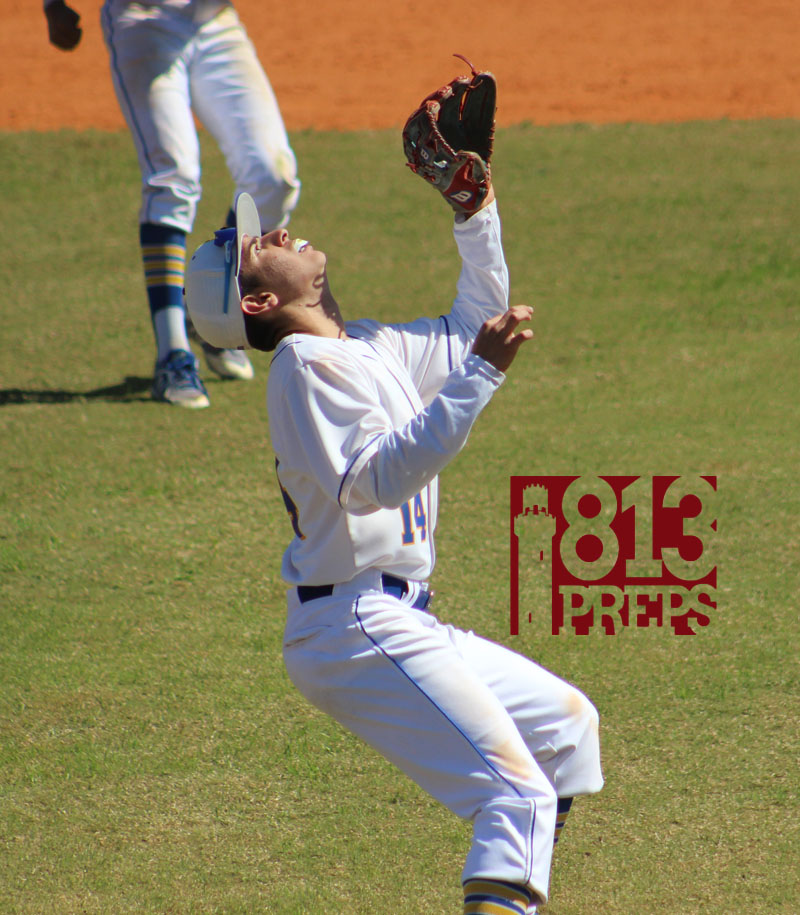 Dragons 3B Yaidel Perez settles under a pop fly he’d catch in the fifth. 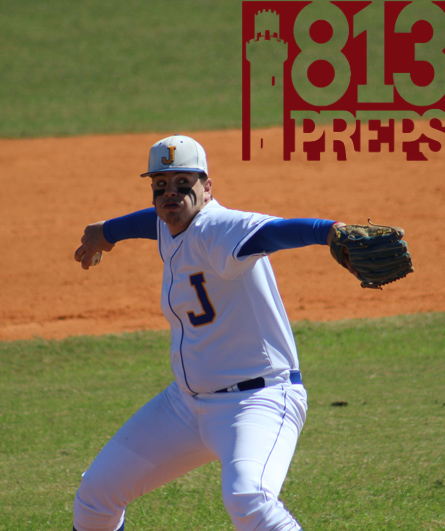 Jefferson senior LaMarr Johns worked 2 2/3 innings and had a nice pickoff at third base. 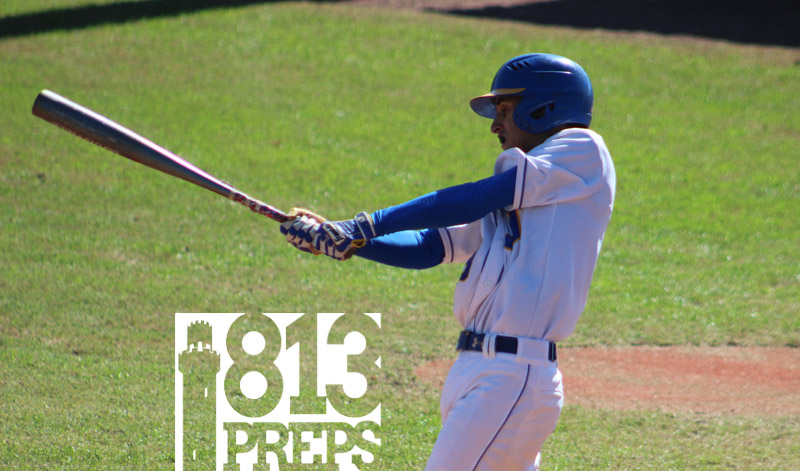 Yadiel Perez singles in the third and would score Jefferson’s first run.

However, Blanco who moved from behind the dish to the mound, would only allow the one run in relief, working the final three innings to notch his second save of the season.

Two road games at Newsome and Bloomingdale start the week for the Panthers, before Plant opens Saladino Tournament play at Lennard next Saturday; while Jefferson will look to stop a four-game skid at Countryside on Tuesday, hosts Wharton on Thursday, and will host Jesuit in Saladino play in seven days. 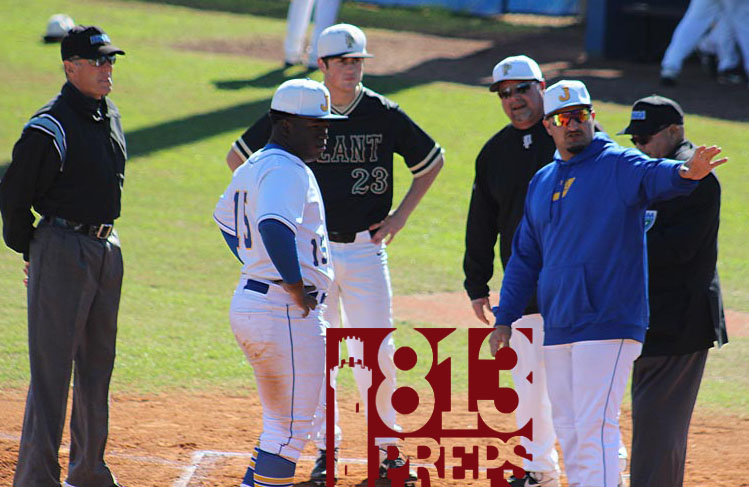