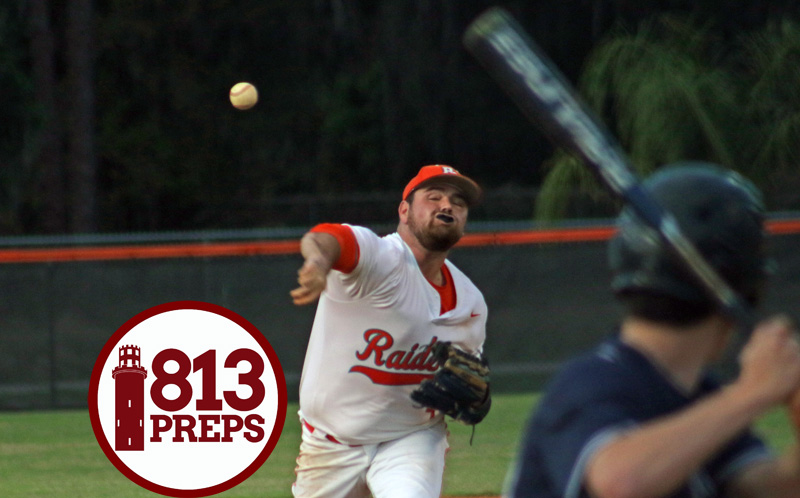 Plant City senior Tyler Dowdy pitched six, scoreless innings, allowing one hit and striking out six to improve to 3-1 on the year.

PLANT CITY – Listed at a healthy 240-pounds Plant City’s Tyler Dowdy isn’t likely to catch many off-guard with his speed, but that doesn’t mean you should loaf after a screamer to the outfield, because aggression isn’t a problem for the Raiders senior.

In Dowdy’s first at-bat against nearby rival Durant on Tuesday, the West Florida signee slapped a fly ball into center and never hesitated around first base, pulling into second with a leadoff double in the home second. The extra base meant the Raiders were able to scratch out a run as Tre Ragan followed, moving (courtesy runner) Jace Stines to third with a right-side ground ball, and Chris Rodriguez followed with his own groundball to second to plate the first run.

The necessary run, it would prove, as Dowdy took the lead back to the mound, going six scoreless, allowing just one hit as the Raiders topped Durant 8-0.

“All fall and in the preseason we worked on speed and agility,” Dowdy said. “I’m a bigger guy, but coach Mike (Fryrear) works on us with running smart, sometimes we have practices that are only base running and that has helped us with our turns and what we do on the bases.” 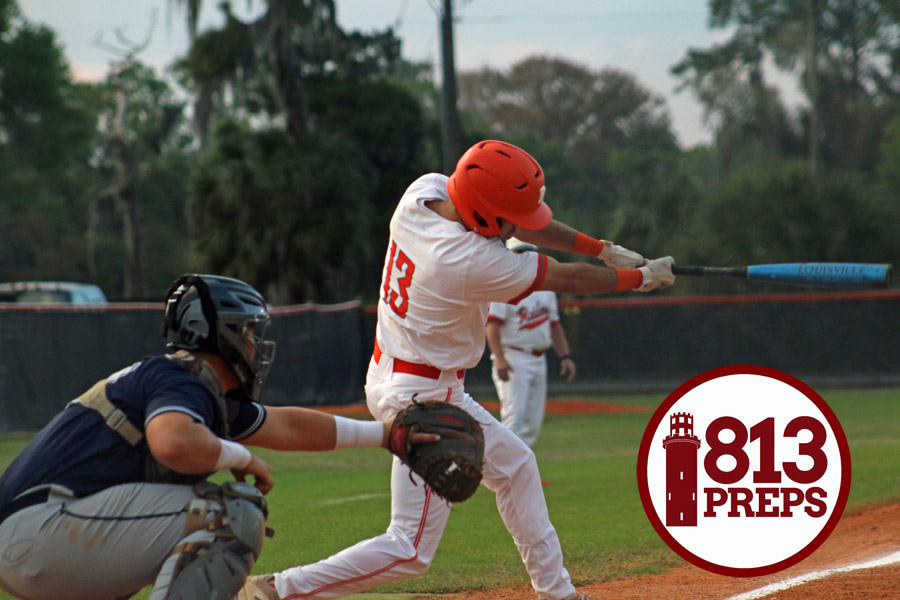 Plant City senior Chris Rodriguez drives a ball to the right side to score the game’s deciding run.

Dowdy, who finished with six strikeouts on the night and improved to 3-1 on the mound this season, wasn’t through at the plate singling in his second at-bat and helping the Raiders tack on two more runs in the fourth as Rodriguez came through again with a two-run single.

“I haven’t started things off as hot as I’d like this season,” Rodriguez said. “But I simplified things down tonight and when I had runners out there, I wanted to get big ol’ Dowdy a couple of runs because I knew a couple was all he’d need.”

Dowdy said he hopes the Raiders’ eight-run, seven hit night is a sign of things picking up on the offensive side.

“It’s a great feeling for everybody, Ryan with the backside double, sophomore Colin Shultz getting himself a double, everybody said when our bats get going we are going to be tough to beat,” Dowdy said. 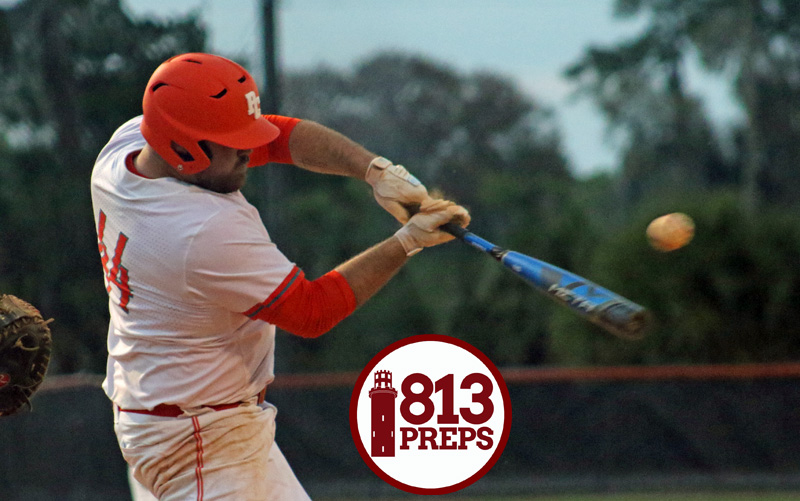 Tyler Dowdy was 3-for-3 with a pair of doubles in the win.

Rodriguez said though it has taken a bit for the Raiders bats to come alive this season, pitching has not been a problem as the starting tandem of Dowdy and No. 1 Jarod Wingo have combined for a 5-1 record, a 1.20 ERA and 72 strikeouts.

“They may not be the biggest names,” Rodriguez said of Dowdy and Wingo, “but they are probably the best 1-2-punch in the state.

“No one may know about them, but no one can hit them either and they put up zeros almost every time out.” 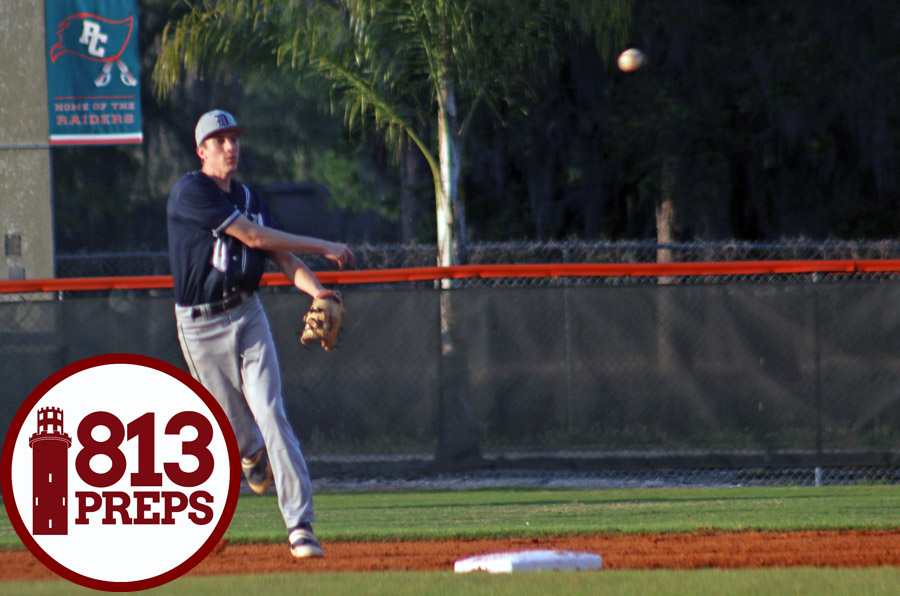 Durant senior SS Luke Cadwallader throws for an out in the first inning.

Plant City (7-1) poured it on in the fifth, scoring five more on a two-run Ryan Robinson double, a Cole Cothren RBI single, and after Dowdy hit his second double of the game, Ragan drove in one on a sac fly.

Durant (4-3) struggled at the plate as only Austin Sewell picked up a single in the fifth inning, and the Cougars had a man reach in the seventh on Plant City’s lone error of the game. 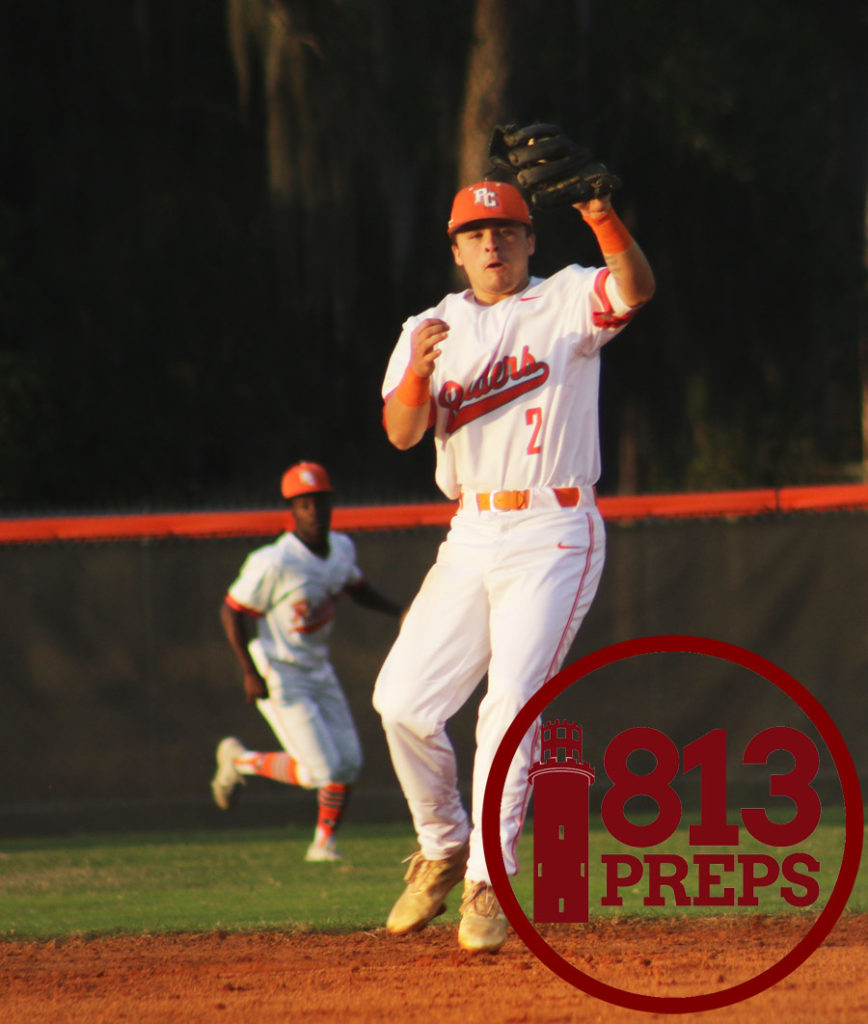 The win was the Raiders second in as many days, as Dowdy tied things in the seventh against Bloomingdale on Monday, and Shultz walked off a 2-1 win over the Bulls with an RBI hit.

Plant City will enter the Saladino Tournament on Saturday as the No. 1 seed and take on a hot Gaither (6-1) team – winners of four-straight after Tuesday’s Cowboys victory over Sunlake. The Raiders and Cowboys square off Saturday from King High at 7 p.m.

Durant will open its Saladino play against Steinbrenner (5-3) in the 7 p.m. game from Brandon on Saturday. 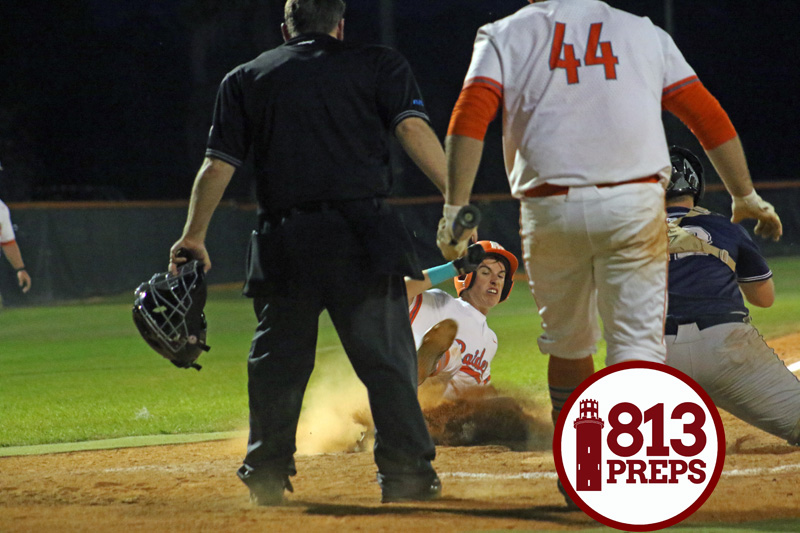 Raiders junior Ryan Robinson slides in for a run in the fifth inning. 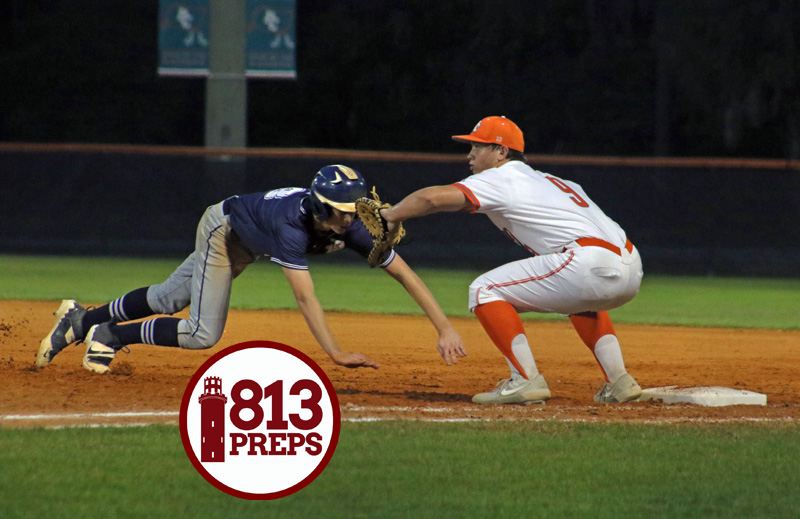 Durant’s Austin Sewell dives back into first after getting the Cougars only hit. 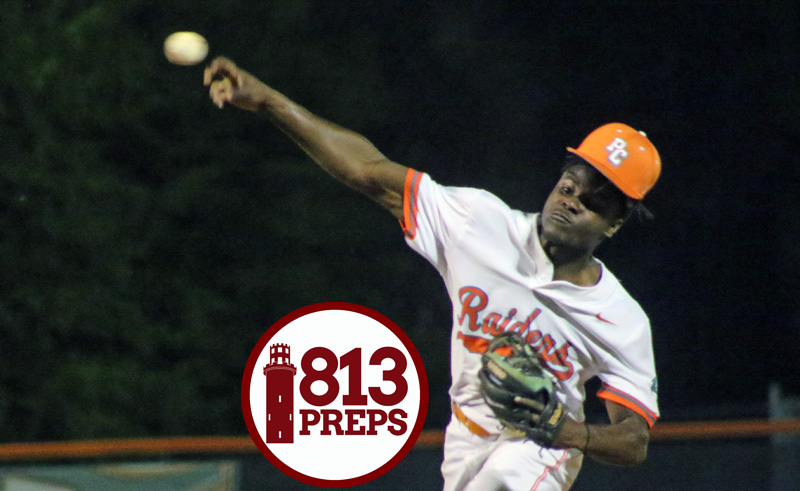