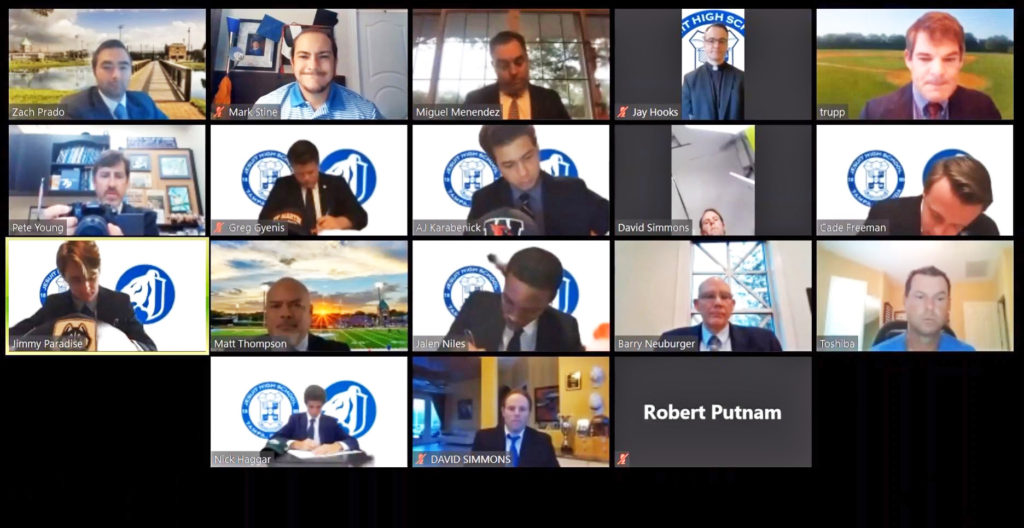 TAMPA – Keeping up tradition takes work. Especially in non-traditional times. Everyone of our collective 813 baseball family is hurting right now, and moreover everyone we know is missing something.

At 813Preps we have tried to make this time in isolation a little easier. We’ve tried to stay positive in our coverage, hopeful in our tweets and inspiring in sharing the ways our student-athletes and coaches are uniting and uplifting each other, even in a time of “social distancing.” We’ve checked out at-home workout Tweets, cage sessions, seen creative home gyms, heck we even checked in on an Instagram Live hair-cutting tutorial from Jesuit’s Camden and Chase Minacci (still waiting on that “after” photo, fellas). We’d love to include them all here, but there are just too many, which is a great thing. Keep that up. Hopefully, we are spreading them on our social media accounts when we see them, but don’t be afraid to tag us (@813Preps on Twitter, Facebook and Instagram).

In this column I thought we’d check in on a couple things that have made us smile during this break, and we plan to have another column soon highlighting more, so if you think there is anything we’ve missed, please let us know by e-mailing me at jarrettguthrie@813preps.com.

Running with the Bull: One of the first things that popped up on social media at the end of March, came from Bloomingdale High and Bulls head baseball coach Kris Wilken, who was honored to have the role of traffic director while students and parents picked up equipment for distance learning. If you weren’t belly-laughing when Wilken busted from his chair and took off across the area where the football team practices during the spring, then I hope you took special note of when his pockets flew from his shorts, creating drag in what I can only assume is a salute to Bulls two-sport standout Dominic Gonnella’s backyard training drill video’s on social media (you should definitely check out the NDSU football signee’s workout highlights on his Twitter by clicking here, especially if you need motivation to put down that bag of chips).

This is what happens when a baseball coach’s season abruptly ends and you ask him to do anything other than baseball. 🤘 pic.twitter.com/IkZGNNvWcr

Tigers’ Traditions going strong: Jesuit is no stranger to tradition, and the Tigers were looking like strong contenders to add to that tradition by competing for its second-straight state championship, and sixth overall this year, posting an 11-0 record before classes were transitioned to online and the season was halted.

Though disappointed, Tigers’ sixth-year head coach Miguel Menendez has found a way to keep his team connected and focused on a goal. As he has done during summers in the past, Menendez decided to reintroduce his team book club and assigned his players to read Angela Duckworth’s “Grit: The Power of Passion and Perseverance.” For Menendez, the idea has served him well with bonding his upperclassmen in the past, and he thought it would be a good team-building exercise for the whole squad during this quarantine.

“I’ve had a book picked out for a while I wanted to read, and we have done this in summers past with returning upperclassmen. So, I decided, you know what, let’s do one as a whole team,” Menendez said. “The book was kind of broken up in three sections, so we split our conversation up to three days (on Zoom) where we talked about it. I try not to lead and let them talk, and our guys really found parts from the story that stood out to us on how we can be better people, better teammates and what we can take from it for our life in general.” 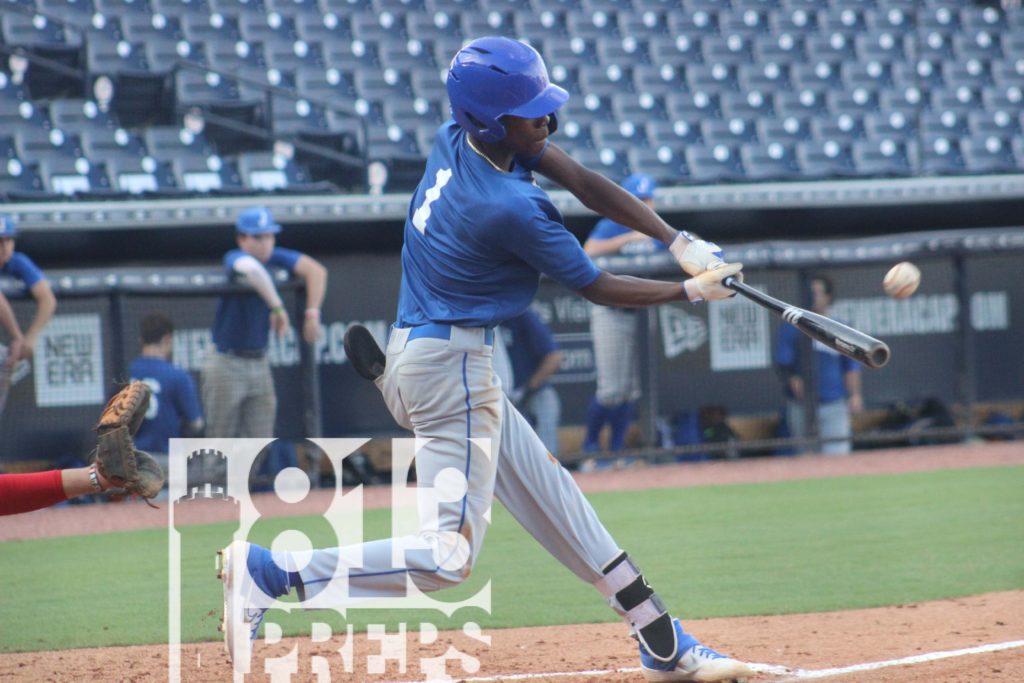 One of Jesuit’s seniors, Jalen Niles, said the book club was a way for the team to maintain its tight bond, despite not being able to get out and practice with each other during this isolation.

“It was mainly assigned to us to keep team chemistry up,” Niles said. “We got together, talked about the book and how it relates to our life and what we are going through at this time … One of the things that helps us on the field is how close we are, and this (book) was a way we could stay together and focused right now.”

Speaking of Niles, he took part in a Zoom signing day ceremony Jesuit held on Wednesday for six seniors. The Florida A&M-bound middle infielder said that the experience was something he has looked forward to for a number of years, and one he didn’t think would come to pass once the coronavirus forced a halt to school activities. And although not how he planned it would happen, Niles said he was thrilled the school showed how much it cared for its student-athletes. 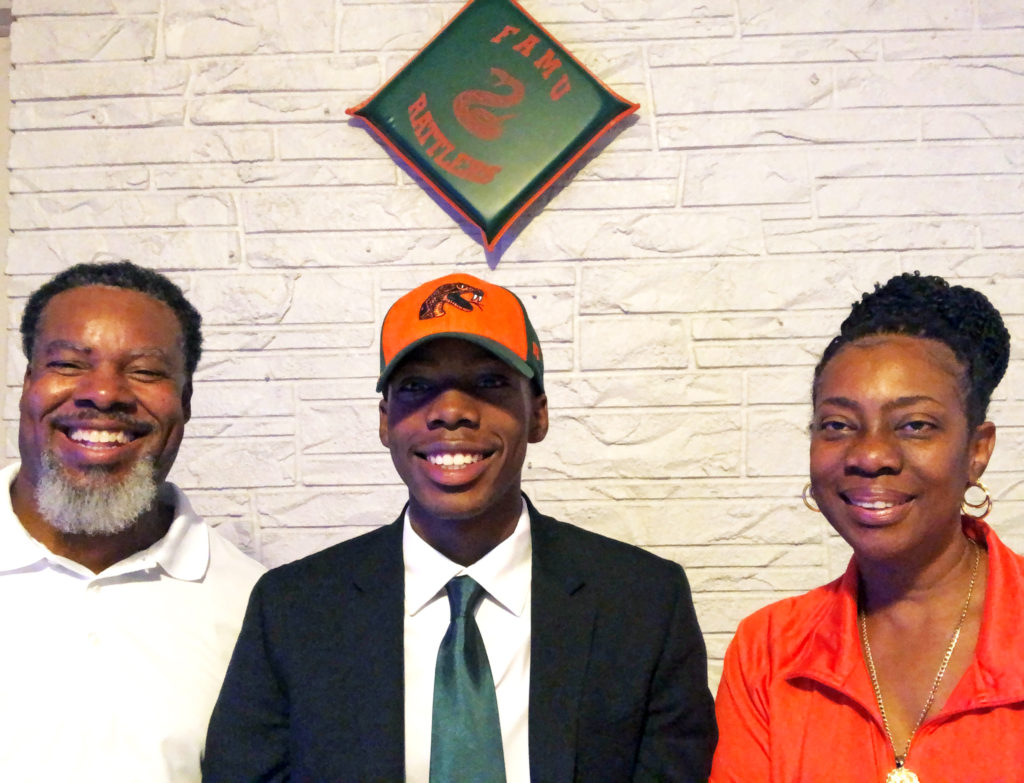 Jalen, along with his father and mother Ron and Sandra Niles (Photo provided by Jesuit High).

“After all of this started happening, I didn’t think there was going to be a signing day anymore, so when I got the text that the school was going to do this, it changed everything for me,” Niles said. “I’ve looked forward to this happening for years, to be with my friends and family and sign that paper and see everyone’s reaction. I’m so glad Jesuit did what they did for us, especially for me to experience with my parents. They are the people I wanted to share this with.”

Also signing his letter of commitment was Tigers pitcher AJ Karabenick (Wesleyan University), as well as Tigers golfer Jimmy Paradise (who signed with UConn and was also a ringer at our Inaugural 813Preps Golf Tournament last August helping lead a group of Jesuit baseball parents to a tie for the lowest round at our event), football players Cade Freeman (Wabash College) and Greg Gyenis (Tennessee Martin), and tennis player Nick Haggar (Loyola Md.). 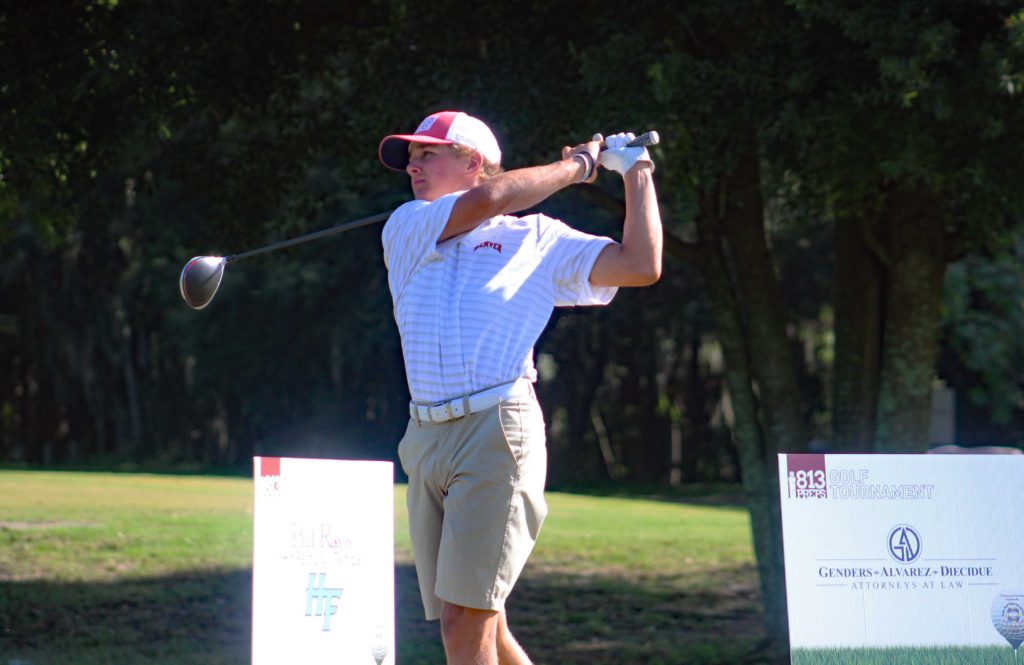 Jimmy Paradise, a two time district champion golfer at Jesuit, tees off at our 813Preps Golf Tournament in August of 2019. 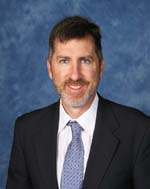 Coach Menendez added that the online signing event was special for all of these seniors and added a special nod to Jesuit Director of Communications Pete Young. And since, Menendez opened the door (and because we know he’d hate it), I’d also like to shoutout Pete Young, who has been a friend and mentor to me for 20 years, and absolutely rocks at his job!

And before we move on from Jesuit and this signing ceremony, it is a great time to highlight Karabenick, who not only has been a four-year member of the baseball program, he has also serves as Jesuit’s student-body president for the 2019-20 school year. Though classes aren’t being held in person, it has not kept Karabenick from his official duties. Along with the school president Father Richard Hermes, Karabenick has provided weekly, video addresses to the student body for the last month.

“A.J. has been a critical part of Jesuit’s successful transition to virtual school the past month,” Pete Young said. “His videotaped weekly announcements, which are distributed to the student body, have helped lend a sense of normalcy and personal connection during these challenging times of social distancing and everyone being away from Jesuit’s campus.” 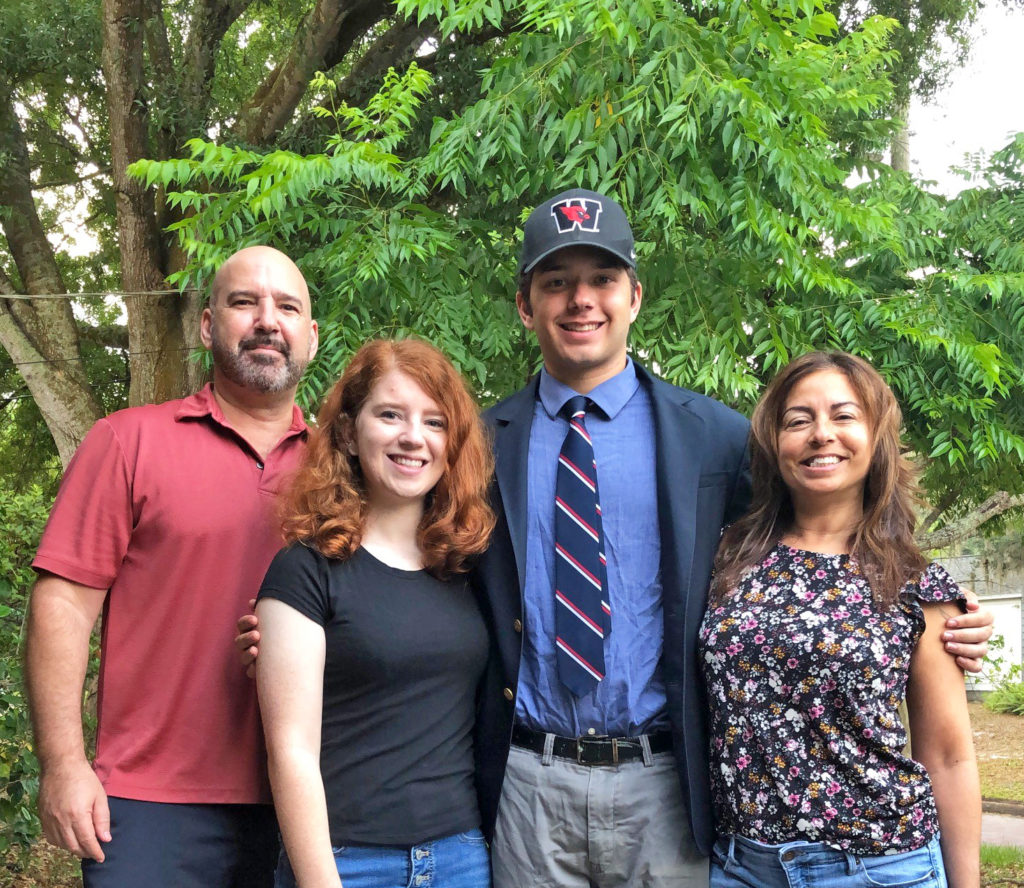 Karabenick will be continuing his education and athletic career at Wesleyan, marking the third-straight year a Tigers’ baseball player has chosen the Connecticut school, which counts “Hamilton” creator and star Lin-Manuel Miranda and New England Patriots head coach Bill Belichik (this tidbit is what I’m talking about when I say Pete Young rocks at his job), among its notable alumni.

Karabenick is also the second-straight Tiger baseball player to hold the office of student-body president, as Andrew Kynes c/o ’19 held the position last year. He said that Kynes was a big influence on his decision to go after the student government position last year.

“Andrew Kynes was on our team last year, and he was a big influence on my decision,” Karabenick said. “I looked at him and thought, if he can do it and be really good at it, then maybe I can do this, too.” 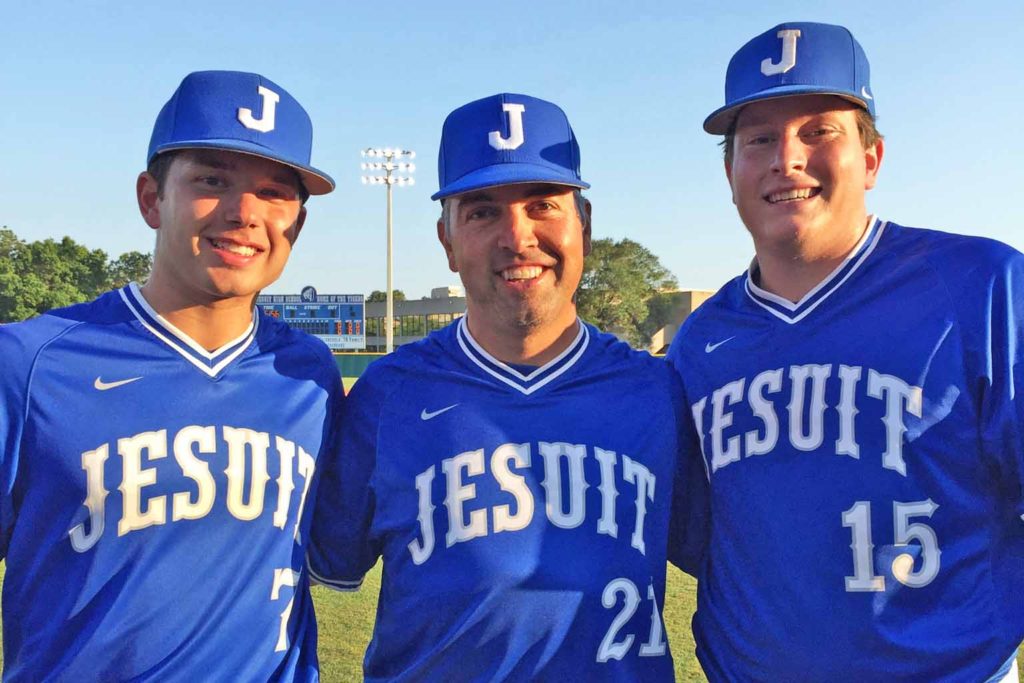 Karabenick admits this is not how he expected his time in office to play out, but he said he is thankful to be playing a role in keeping his fellow students “together.”

“Every Wednesday, I take a video of announcements, send them in to our administration and the post them for our student-body to see,” Karabenick said. “It keeps us all together, and yes it stinks that those announcements used to be all about extra-curricular activities, and now those just aren’t going on right now. But keeping all of us informed, staying together and knowing what’s going on in our community means a lot.”

For Menendez, Karabenick continuing to take his responsibilities to his fellow students so seriously is no surprise.

“For him as student-body president there really is a lot going on, from having to make daily announcements, start our convocation, while handling a lot of other responsibilities for our school and he does a really good job,” Menendez said. “Even more so now, trying to keep people informed, being that conduit between the student body and working with Father Hermes and our administration.

“It’s a testament to him, and he is going to be majorly successful with whatever it is he decides to do with his life. He has that it-factor, that thing that you love to see in your players your coach.”

The Art of Pizzio: Many schools have some great traditions for their seniors, especially as they are set to depart. But, by far our favorite, comes from the mind and hands of Leto skipper JJ Pizzio. Throughout his two-decades of coaching, Pizzio has gifted each of his departing seniors with a unique and personal graffiti poster and painted baseball. This season, though the team’s “Senior Night” festivities have been disrupted, Pizzio hasn’t let the tradition slide. Pizzio said he spends about three days working on each one of the posters.

“I have been creating those pieces for my players for my entire 20-year career,” Pizzio said. “… I still have players that tell me they are still sitting on the shelf. They know Graffiti is a secret skill I have, so I try to give them something out of the ordinary.” 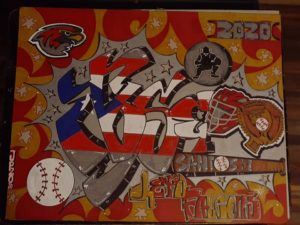 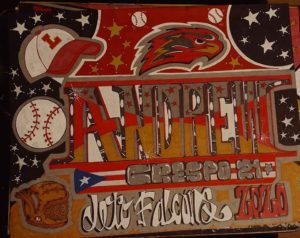 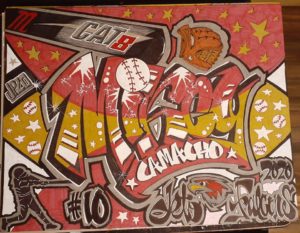 Pizzio said he is planning on working on the graffitied baseballs next, and said Leto still plans on having some form of Senior Night celebration when we are cleared to gather. But in the meantime, he hopes the posters are a special way to let his guys know how much he is thinking about them.

“It’s very personalized and a true one-of-a-kind type of gift from me to them. (To) let them know I genuinely care for them,” he said. “So, honestly by doing them I want them to look at them and know Coach has their back and will always have their back whether we are in the middle of a pandemic or they are all grown up and just reminiscing of days from the past.” 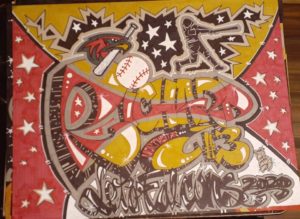 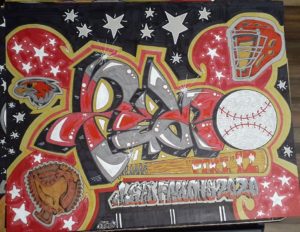 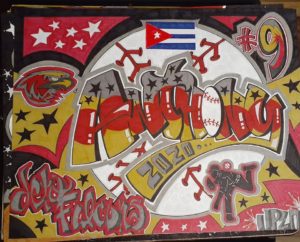 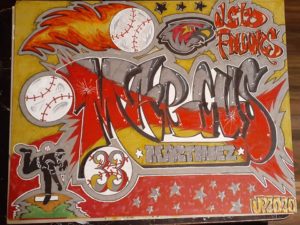