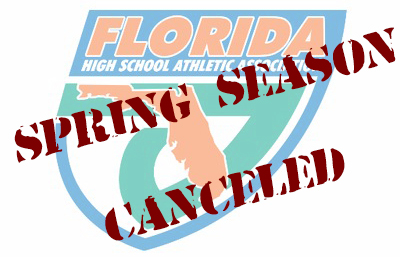 Following Florida Gov. Ron DeSantis’ announcement on Saturday that schools will remain closed and education will remain online through the end of the 2019-2020 school year, the FHSAA released a statement Monday afternoon, announcing the organization would follow and cancel the rest of the 2020 spring sports spring sports (baseball, flag football, lacrosse, softball, tennis and track and field, and boys volleyball) season as well.

The press release from the organization this afternoon read:

“Following Governor Ron DeSantis’ announcement mandating schools continue distance learning for the remainder of the 2019-20 school year, it is with heavy hearts that the FHSAA has decided to cancel all FHSAA affiliated events, inclusive of the state series and all championship events, for spring sports. The safety of our student-athletes, coaches, officials, and fans is our top priority. With the evolving threat of the CORONAVIRUS (COVID-19), we must ensure that we do not contribute to the spread of this illness.”

Though this decision was expected by many after the Governor’s decisions, reactions to this news setting in and becoming official was difficult to hear. Reached for comment, Berkeley Prep baseball coach Richie Warren, whose Buccaneers were 11-0 and ranked No. 23 in the nation by MaxPreps, said the news was a heavy blow for not just for his players but for everyone involved in his program.

“Our kids are crushed,” Warren said. “Our coaches are crushed. Our families are crushed. We held out hope and were trying to stay positive but I think we all knew this was coming. I have no words to express the disappointment I have that our eight seniors won’t get a chance to play a full final season.”

In a March 31 statement, the FHSAA had a vague statement about exploring the eligibility for players to return for a fifth year, stating: “the FHSAA is working diligently to create a plan regarding additional eligibility for students who have not been able to participate in spring sports.”

This release put an end to any speculation stating on Monday: “Under the guidance of the Florida Department of Education regarding grade level retention, and upon review of the Florida Statutes and FHSAA Bylaws, no additional eligibility will be granted for spring sport athletes.”

Warren and his Buccaneers are far from alone in their disappointment. The cancelation stings for many of the area’s top teams. Leto’s baseball program has made back-to-back region appearances and skipper JJ Pizzio was looking forward to battling fellow back-to-back semifinalists Strawberry Crest, and reigning state champs Plant City as the district heated up for a spot in this season’s state playoffs.

“The Hardest part of waiting out this virus and a final decision by the FHSAA on our season is the thoughts of ending our chance to compete against my district opponents for a chance to get to the Final 4 for the third time in three years,” Pizzio said. “It is quite depressing. The sense of “What if,” it runs constantly through my mind … Even if not my Leto Falcons, Strawberry Crest would have been (to states) three times as well, Plant City could have back-to-back State Championships even Jesuit in another District could be back-to-back.”

Jesuit baseball, which was also undefeated at 9-0 when the crisis forced a halt to the season, had its sights set on another state title, and coach Miguel Menendez shared the same disappointment as Warren and Pizzio. However, Menendez also said he hoped there could be a silver-lining in this tough situation that he hoped could serve as motivation for his student-athletes.

“Obviously, we are disappointed for our student athletes, but it’s an understandable decision,” Menendez said. “I hurt for all of our guys, but especially our seniors.

“I know this isn’t how they dreamed of finishing up their high school career.  Our guys were looked forward to continuing to build their legacy here at Jesuit and part of that journey was not finished. That’s the hard part, but they will be able to learn and use this as motivation moving forward. We talk all the time about the journey and not letting winning and losing baseball games define you. I think that’s the lesson here. This loss of your season doesn’t define you, it’s part of the journey. Embrace this and make the most of it.”