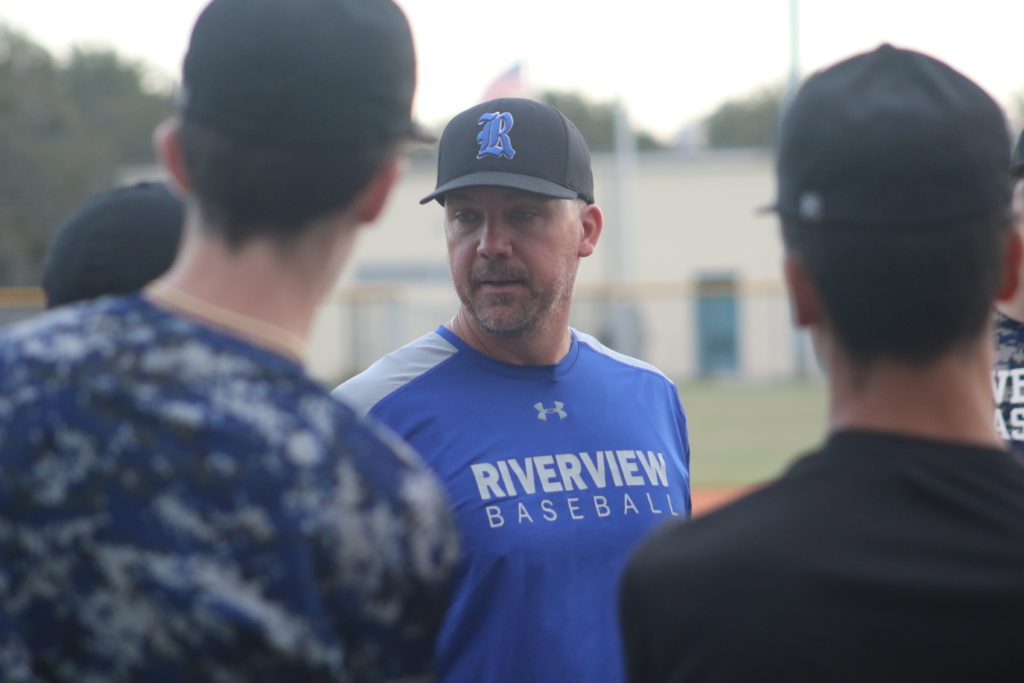 RIVERVIEW – Matt Stallbaumer informed 813Preps that he has stepped down as the head baseball coach at Riverview High effective immediately. Stallbaumer, who took over the Sharks baseball program in December of 2019, led Riverview to a 6-3 record before the 2020 season was cut short due to the COVID-19 shutdown.

Stallbaumer declined to comment on a specific reason for his resignation, but did say his departure from the school was amicable. However, soon after 813Preps’ conversation with Stallbaumer, start-up baseball program TNXL Academy Tampa tweeted a welcome to the coach “as head coach/academic coach to TNXL Tampa.”

Stallbaumer is a long time head coach in the Bay Area – Brandon and Riverview among them.

Most importantly – Baumer is a teacher for Hillsborough Virtual and will push and monitor academic performance! pic.twitter.com/rGNbReVclw

Prior to taking the position at Riverview, Stallbaumer spent 15 seasons as the head coach at Brandon High (from 2003-18). In that time, he led the Eagles to the post season 10 times, including four district titles and a state runner-up finish in 2008.

Stallbaumer did not hold a teaching position at Riverview, but is employed by Hillsborough County’s Virtual School program.

For Riverview, his departure means that the program must find its fifth head coach in three seasons. Prior to the 2019 season, Bill Leiby stepped down from the position after 14 seasons, and a committee of assistant coaches ran the spring season that year. Heading into the fall of ’19, former USF assistant Chris Cates was hired to run the baseball program, however he stepped down after the fall season and is currently on the baseball staff at the University of Tampa.

Riverview athletic director Kevin Massena said he was caught by surprise by Stallbaumer’s departure and acknowledged that there has been some instability at the position recently.

“My head is still spinning a little bit, we hired a USF assistant and that didn’t work out, then hired a coach who had taken a group to a (FHSAA) final four in recent history and that didn’t work out,” Massena said. “Top to bottom, 21 sports, we just don’t have a lot of coaching turnover here. I want someone who is going to be here a lot of years, like Bill Leiby was, that’s my goal.”

Massena said depending on current county mandated hiring regulations he wasn’t sure exactly when the position would be posted, but said he would be searching for a new coach as soon as he was able.

“I want someone who wants to make Riverview their home, make this a place people enjoy being,” he said. “That’s always our goal when looking for a new coach.”