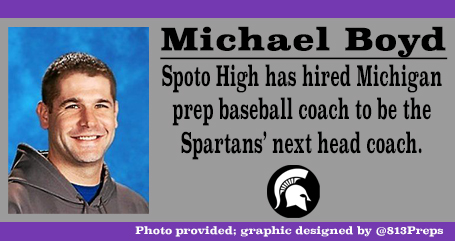 RIVERVIEW – Spoto has selected its next high school baseball coach as Michael Boyd has been tapped to head the Spartans program, the school’s athletic director Rory Beauford said on Monday.

Boyd, a native of Michigan, previously served as the head coach at Bloomfield Hills High, in the suburbs of Detroit. He spent seven years at Bloomfield Hills, where he led his team to three district championships and two region finals appearances.

He played collegiately at Eastern Michigan University, and has served as an associate scout for the Texas Rangers organization since 2008.

Speaking with 813Preps on Monday, Boyd said he is excited to begin his role as head coach as well as joining the Spoto staff as a physical education teacher.

Boyd, replaces Kevin Welborn who led the Spartans for the previous four seasons, but stepped down in April after an 0-8 record in 2020 (when the season was halted due to the pandemic).

With the change at head coach, Boyd now becomes Spoto’s sixth head coach in the 15 years in the school’s history.

“Coming in, yes there is past experience, but for me learning the background of these players – what is already present – and building on that and the school’s culture is going to be the most important things for me at the start,” Boyd said. “Consistency – my plan is to be at Spoto for a long time … there is a year-long approach to this and there is no off-season. If kids want to play other sports, I encourage that, but there will be options for kids to stay active year-round in baseball if they choose to represent Spoto.”

Boyd admitted that this is a unique time to be taking over a program, with Hillsborough County Schools starting with one week of distance learning, before attempting to return to a brick-and-mortar curriculum, but said he is excited for the challenge. At the time of our conversation, Boyd said he had just been informed of getting the job on Friday, and that he is looking forward to getting to the school, meeting his colleagues and introducing himself to his team.

“Mr. Beauford called me this morning to congratulate me, and I really just found out on Friday, so it is still early,” Boyd said. “I plan to go in this week and introduce myself to the staff and the community, but I can’t wait to get around those players and get started.

“It’s an ever-changing environment right now, but hey, that’s the game of baseball.”