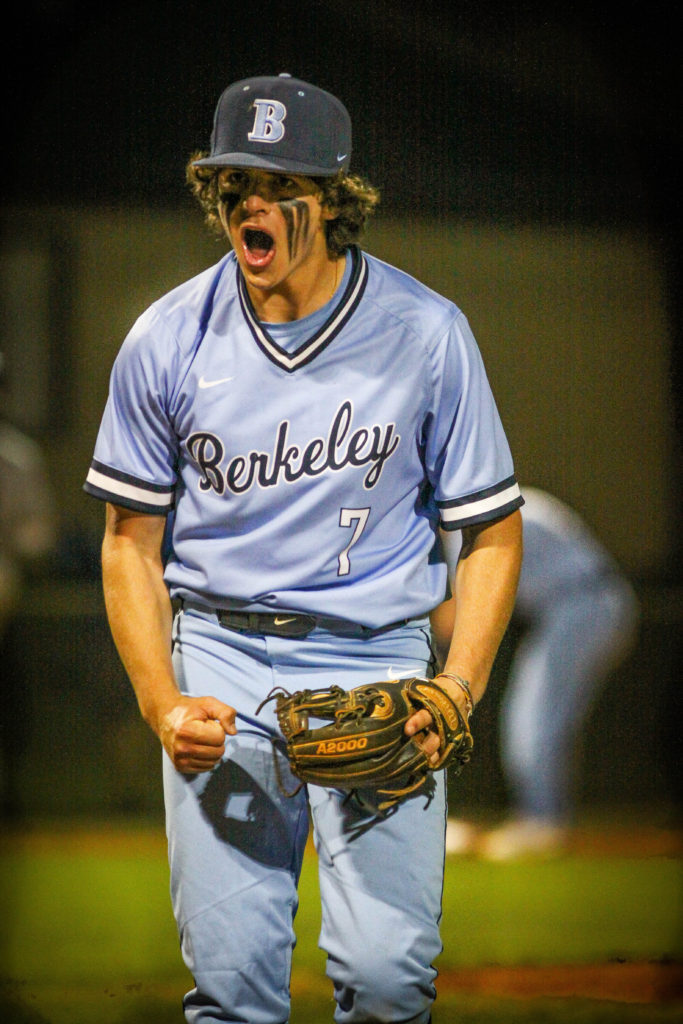 Senior RHP/OF Andrew DiMisa not only had a great outfield-assist to keep Bishop McLaughlin from scoring in Berekley Prep’s 2-0 win on Tuesday evening, but, also in the clutch, struck out the last two Hurricanes’ batters in relief with runners at first and second to pick up the save. Photo by Mike Camunas

TAMPA — The game ended up being worth the wait.

But the end of the game couldn’t wait.

When Berkeley Prep (1-0) hosted Bishop McLaughlin (0-1) and then held on for a 2-0 win, the game between the Buccaneers and Hurricanes turned out to be a fast-paced pitcher’s duel that took just a breathless hour and 45 minutes on a chilly night.

“I was super excited before the game,” Berkeley Prep’s JT Quinn said in his postgame interview, “so I tried to chill out most of the game, but I was glad to be back out there.”

Quinn, a junior Ole’ Miss commit, pitched 6 1/3 innings, giving up four hits, walking four, but striking out seven. Bishop starter junior Augie Mojica matched Quinn until the bottom of the fifth when the Buccaneers were finally able to get on the board thanks to a fielder’s choice RBI by Gunnett Carlson to score Owen McElfatrick, while Anthony Castillo was able to score on an E5 on a Cade Kurland ground ball.

Mojica gave up just the one hit, though hit two batters and walked three, as well as striking out five.

“It was two good pitchers — two great high-school pitchers going at it,” Berkeley Prep coach Richie Warren said in his postgame interview, “and both worked pretty fast and both defenses made some great plays, we were just fortunate, in (the bottom of the fifth) to hit the ball and push it across.

“And that’s high-school baseball: putting the ball in play and forcing the other team to make the play.”

Great defense did keep Bishop off the board in the top of the sixth, as Isaiah Myles flied into a double-play, leaving it up to Andrew DiMisa to come up with two of the biggest contributions of the night.

First, it was an outfield assist to Carlson, who would tag Bishop McLaughlin’s Andrew Duncan at home, but after Quinn walked back-to-back batters after striking out the lead-off hitter in the top of the seventh, Warren’s call to the bullpen was to DiMisa, who was lights out.

“I wanted to (finish the game and go the distance,” Quinn said, “but its okay that I didn’t.”

DiMisa would come in and strike out Nicholas Cucchi and Ethan Burkhardt to end the game.

“There were a few too many strikeouts (by our guys) early on,” Warren concluded after the game, “but the goal, you know, was to go 1-0, so we’ll continue to work on all the other stuff.”