After early chances Gaither breaks through, earns win at Alonso 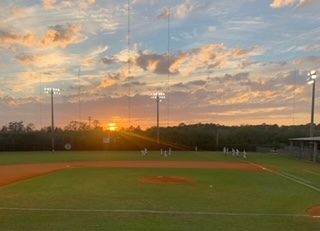 The sun sets beyond the right field wall at Alonso on Thursday (photo by Ricky Cantor).

TAMPA – Gaither used strong pitching performance from Colin Jackson and a four-run rally in the fifth inning to defeat Alonso, 6-1 on Thursday.

The Cowboys (2-0) applied pressure early in the contest by putting a pair of runners on in both the first and second innings, but Alonso starter Haile Daley (3.2 Ip, 1 ER, 3 K’s) was able to work out of the jam each time.

Gaither finally broke through in the third when CJ Hanson and AJ Graham opened the frame with back-to-back hits. DH Jacob Choe plated Hanson for the Cowboys first run. The visitors would threaten again with a pair of runners aboard in the fourth, but Sammy Seplowe relieved Daley and struck out Graham to escape the inning.

Alonso (1-1) would respond in the bottom of the fourth as senior Zen Hiatt laced a double to deep right-center scoring Seplowe to tie the game at 1-1.

Choe (2-3) led off the top of the fifth with a single, followed by back-to-back walks to Frank Perez and Miguel Pina.  With a fielder’s choice and strikeout that followed, it appeared that Alonso would again escape unscathed, but Seplowe issued walks to David Gonzalez and Bryce Busa to put Gaither up 3-1. Hanson (4-for-5) then singled in a pair of runs to extend the lead to 5-1.

“I just tried to keep it low and smack it hard,” Hanson said. “I was actually trying to go to right center, but he threw me something off-speed, so I just pulled it down the line.”

The lead would be more than enough for Jackson. The senior pitched five innings surrendering three hits, while striking out five in just his second career varsity start.

“My mentality is to pitch aggressively and hit my spots,” Jackson said. “My slider was working for me early, and I found my fastball after the second inning. Then I brought out the curve and was having success changing eye levels.”

An Austin Grause  RBI in the sixth  capped the scoring for Gaither, while Ben Vasquez tossed a pair of scoreless innings in relief for the Cowboys.