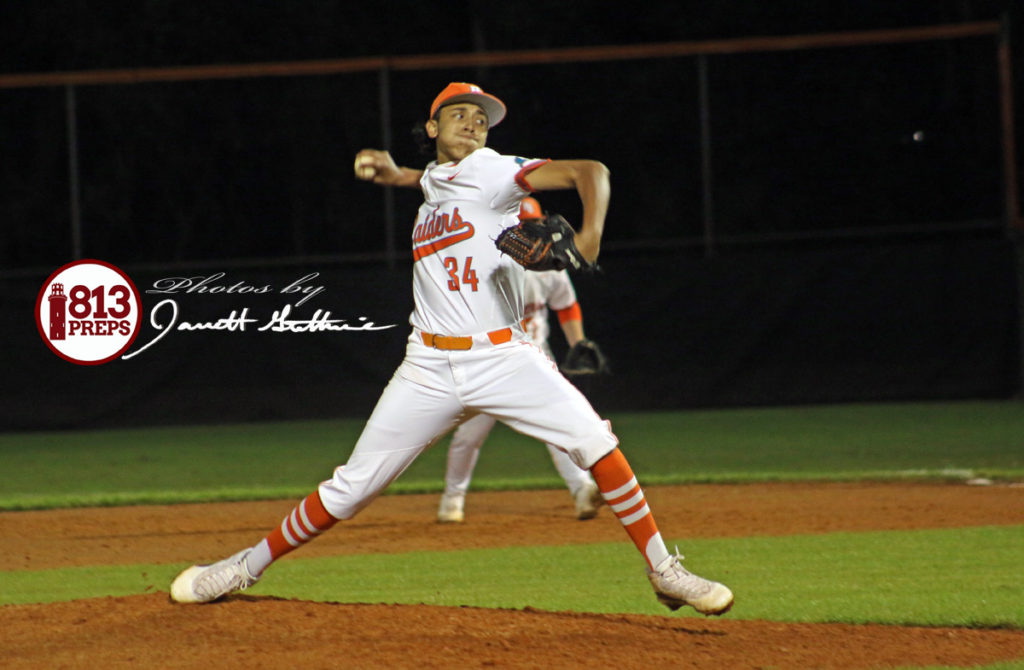 Plant City sophomore Adan Longoria struck out 11 in his varsity debut, pitching a complete-game shutout against Lennard at home on Friday.

PLANT CITY – Since last Thursday, Plant City sophomore Adan Longoria has been chewing on the knowledge that Raiders coach Mike Fryrear would be handing him the ball for his first varsity start against Lennard on Friday. When asked postgame, Longoria said he didn’t build it up too much, instead choosing to focus on small things, minor tinkering in preparation for his high school, mound debut.

“I knew last week on Thursday,” Longoria said. “So since then, I’ve just been practicing grips, doing small mechanical things and making sure I was on it and had no mis-pitches.”

If any nerves were there for Longoria, they didn’t show as he turned in a 1-2-3 inning to start things, then proceeded to deal from the hill for a complete-game, three-hit, 11 strikeout, shutout as Plant City claimed a 2-0 victory.

“I felt, not really nerves, just more excitement because as a sophomore this is the opportunity you want,” he said, “and to face a team like that, have such a close, tough game and come out with the win, it just feels great.” 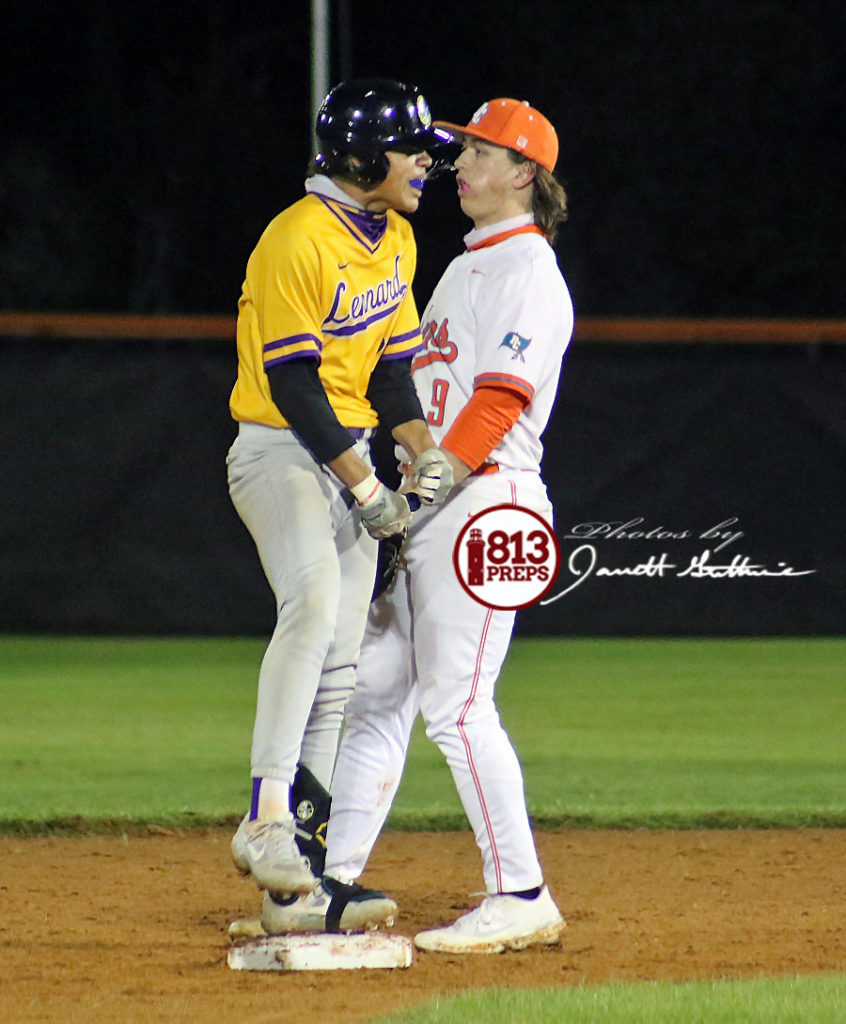 Lennard sophomore Alex Brazer celebrates toward his cheering dugout after his fourth-inning leadoff double to left.

The only significant threat to Longoria all game came in the fourth, when Lennard got a leadoff double from Alex Brazer, sho reached third with the second out. This drew a visit from Fryrear to his young arm, with the message that if he fell behind to Longhorns slugger Keith McClain, they’d likely give him the free pass to first. Instead, Longoria went on the attack and ended the threat with a strikeout.

“I said, ‘listen you can try and get ahead with a fastball, but if you miss he’s gonna pound it and we’re going to be hurting,’” Fryrear said of the mound visit. “I suggested starting with a curveball, but I left it up to him, and he attacked with the curveball, got a swing on a ball in the dirt a couple times and we got lucky with that. But he established a zone with the umpire early and worked it hard all night.” 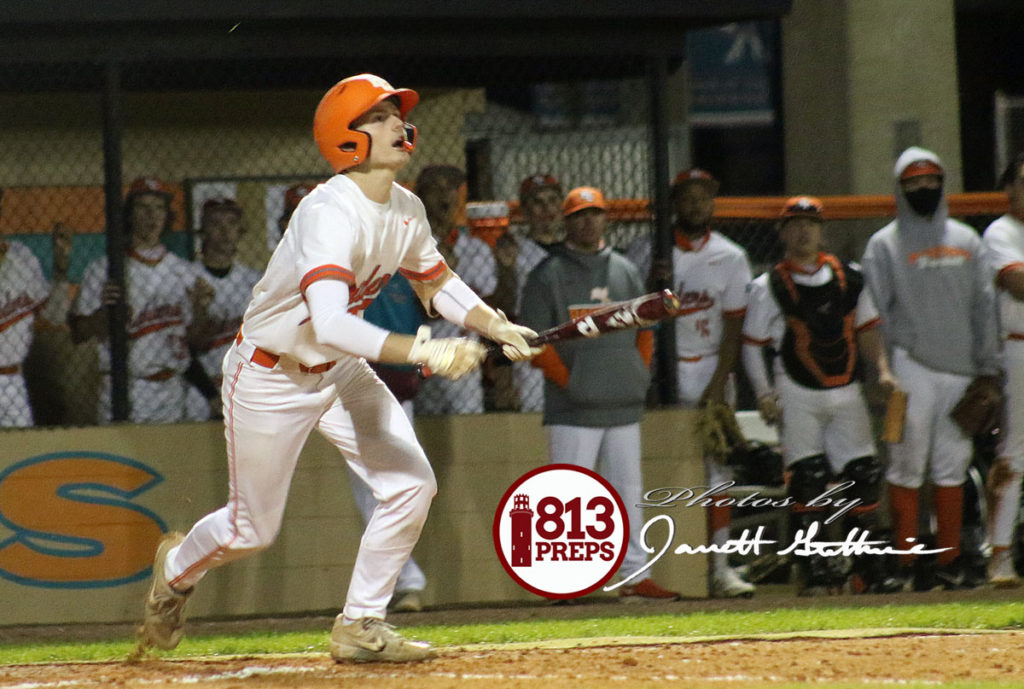 Plant City’s Jace Stines watches his RBI bunt sail down the first base line. The sac bunt would plate the run, finding clay behind first base and scoring Wyatt Fordham.

Offensively, it was a bit of an odd spectacle for Plant City (2-0) as they struck in the first after two hit-batters loaded the bases, and junior Carson Mohler (1-1, single) drew the RBI base-on-balls. The Raiders added insurance in the fourth when the game’s lone error allowed Wyatt Fordham to reach, and eventually score on a Jace Stines bunt of a high fastball that sailed over the Longhorns first baseman McClain’s head as he stood near the bag holding the runner in place. McClain got to the ball and threw to second to record the inning’s second out, but Stines got the run across in the process.

“It was a first-and-third bunt and we worked on that yesterday at practice,” Fryrear said. “Stines loves a high pitch, and hey, it worked out on our side tonight.”

For Lennard (0-2) it was a tough loss, despite two quality performances on the mound as Jack Mueller and Fransisco Alaniz combined for the Longhorns, holding Plant City to one earned run and just two hits. 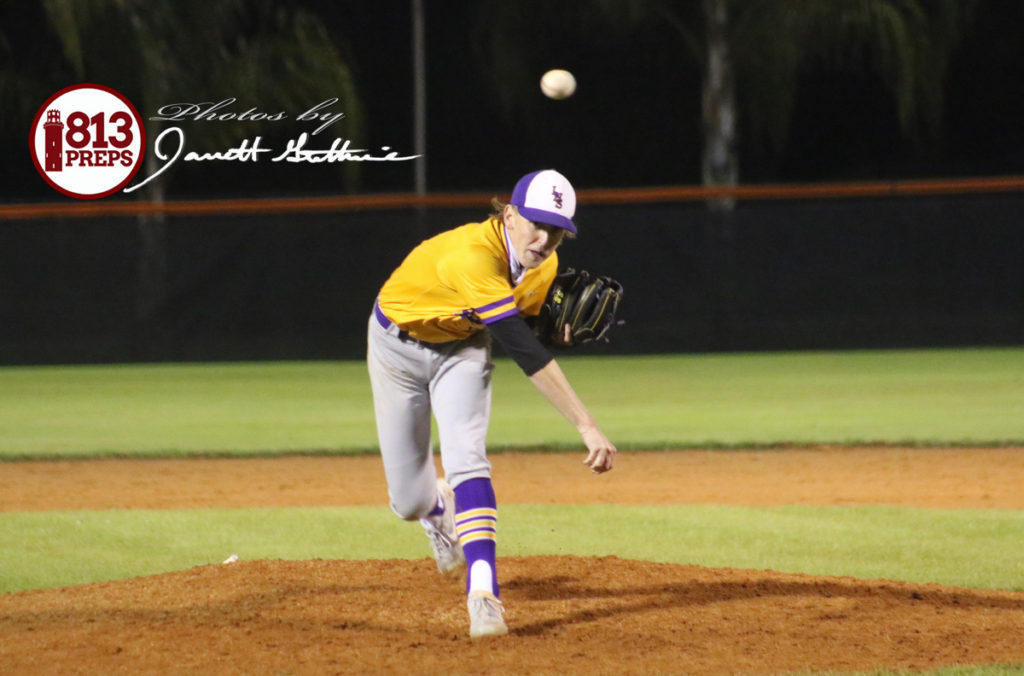 In his four innings of work, Longhorns sophomore righty Mueller struck out five, and after a few control issues in the first, faced just one over the minimum in his final three innings. Alaniz, a senior, worked well out of a three-quarters arm slot and except for his own hit-batter, kept PC’s offense to just one baserunner, who never reached second.

Offensively, McClain added a pair of singles to the stat-sheet, but Lennard couldn’t move him around either time.

Plant City has a busy week on the road next week with trips to Durant (Wednesday), Steinbrenner (Friday), and Brandon (Saturday), while Lennard has just one game – at Durant, Monday on its slate.