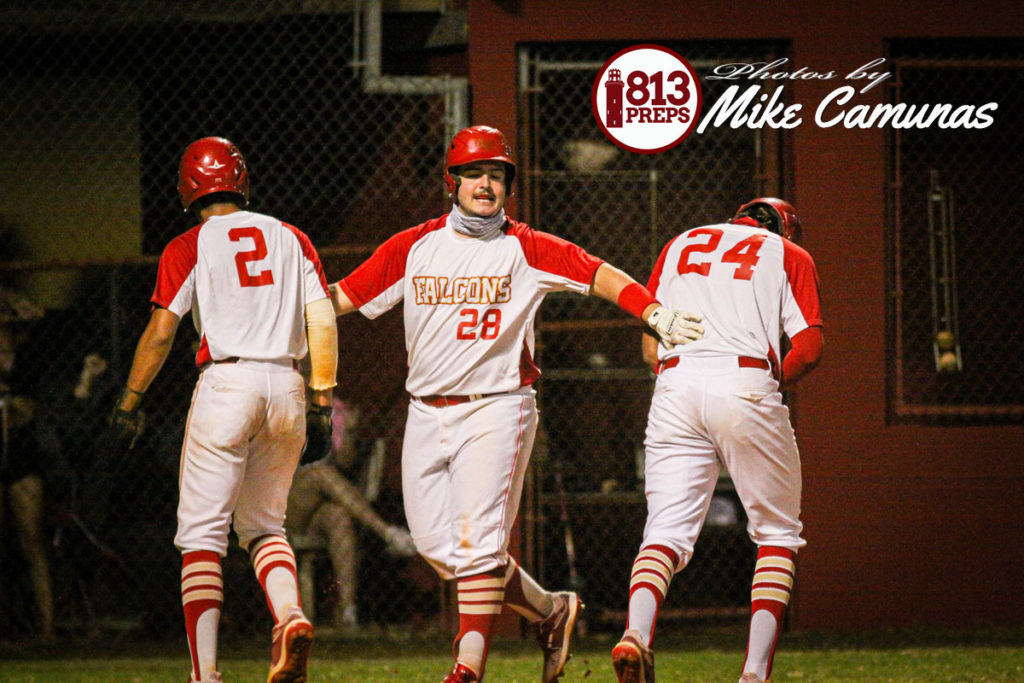 Mikey Lopez, center, celebrates with R.J. Guiterrez, left, and Damian Breton, right, after scoring to tie the game versus Steinbrenner at 6-6 in sixth, with the team’s SECOND bases-clearing 3-RBI double by Brayan Cruz. Breton would go on to hit the walk-off RBI single to secure Leto’s 7-6 come-from-behind win over the Warriors on Thursday night (photo by Mike Camunas).

Down 6-3 headed into the bottom of the sixth, with opponent Steinbrenner, seemingly, having the Falcons on the ropes, Pizzio remembered what his dad used to say.

And that’s what Leto did, sticking around, then scraping by for an impressive come-from-behind AND walk-off win to top the Warriors 7-6.

“We got the lead in the first, then gave it right back to them,” Steinbrenner coach John Crumbley said. “We have to find a way to correct that.”

Indeed, the Steinbrenner (0-2) kicked off the scoring right away, putting two on the board in the first inning thanks to a two-RBI single by Chris Roberts, yet, in the bottom of the inning, with Jacob Statman on the mound, the Falcons took a 3-2 lead thanks to a bases-clearing double by Alberto Attias.

Statman would still strike out the side in the first and finish with four strikeouts and hits, and two walks over five-plus innings pitched.

“He gave us a chance, but we just have to do better as a team,” Crumbley added about Statman and the deflating loss.

As Steinbrenner would build a 6-3 lead with RBIs from Eliecer Martinez and Andrew Burns, and two more from Tayden Hall, Leto would eventually get to reliever Jacob Hill and knock him around for three hits, including ANOTHER bases-clearing double in the sixth from Brayan Cruz, scoring R.J. Guiterrez, Mikey Lopez and Damian Breton.

Then it would be a senior moment — coming from Breton — who would step up clutch and hit a walk-off RBI single to score Damien Lantigua.

“I was just expecting a fastball, but my time came around even after I had a rough start to the game,” said Breton, who struck out in his first at-bat, but also went 2-for-4 on the night. “Brayan really came through (in the sixth), but I see a lot of (players on this team) really pick each other up — like R.J. picked me up and said my time was coming and it did.”