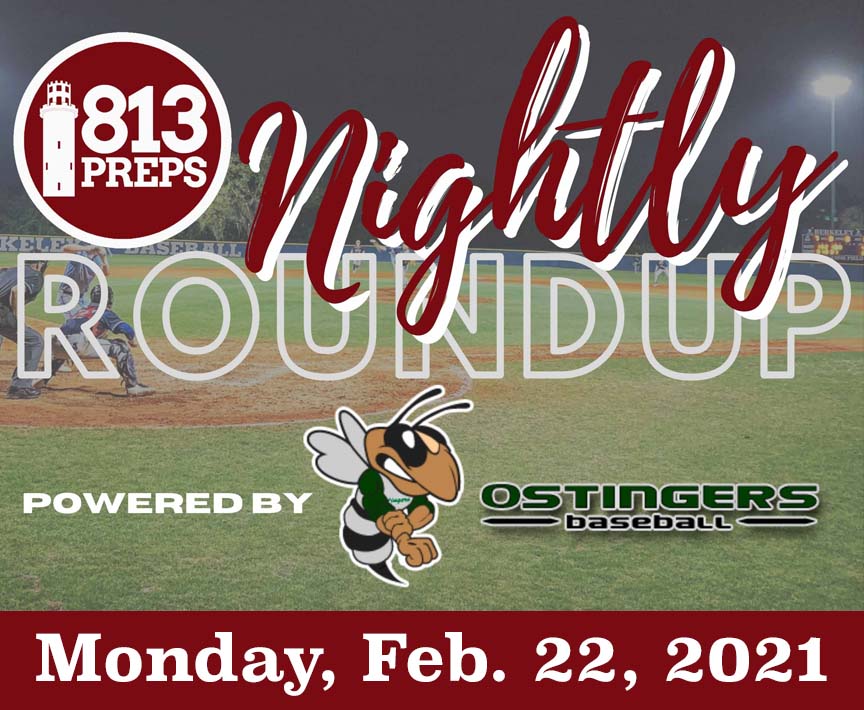 Hillsborough took control early as three runs scored on Blake errors in the first, and the Terriers never let up ending things early on the road Monday afternoon. Freshman Cam Mallo was 2-for-2, scorning three times and doubled in a run in the win; Tanner Jones doubled and scored twice and Salvy Urso drove in three for Hillsborough. Terriers junior Caden Ross allowed just one hit, while striking out seven in five innings on the mound for the Terriers to earn his first win of the season. Tavian Woods doubled for the Yellow Jackets only hit of the game.

Some miscues on the mound allowed Bloomingdale to tie and then take the lead on Robinson in the fifth inning before Alex Vazquez’s pinch-hit RBI liner added some insurance behind a strong night on the mound from the Bulls. David Eckaus worked five innings, allowing one unearned, allowing two hits and striking out eight, before Jake Nolte finished off the rest with two shutout innings to earn the save. Cameron Duss was 2-for-3 in the loss for the Knights, and John Anderson singled and scored his team’s lone run in the third.

ITS A COUGARS WIN!!! Herm shuts the door for the 5 out save, backing Rowland who gets the win in a fantastic performance from the freshy. We defeat Lennard 3-1 and move to 2-0 on the young season.

Our next game is Wednesday against PC, at our place. #GOCOUGS #COUGSW pic.twitter.com/pQlDdWRrFF

Durant freshman Blaine Rowland tossed five shutout innings, striking out seven as the Cougars held of Lennard for a home win. Senior Thomas Allen was 2-for-3, scoring twice, while Dylan LaPointe and Javy Hernandez picked up RBI in the game. Dean Hotz doubled and scored a run for Durant. Lennard’s Carter Payne thru all six innings for his team, striking out six and allowing just one earned run; Fransisco Alaniz was 1-for-3, scoring his team’s run and Luis Rivera had two hits in the loss.