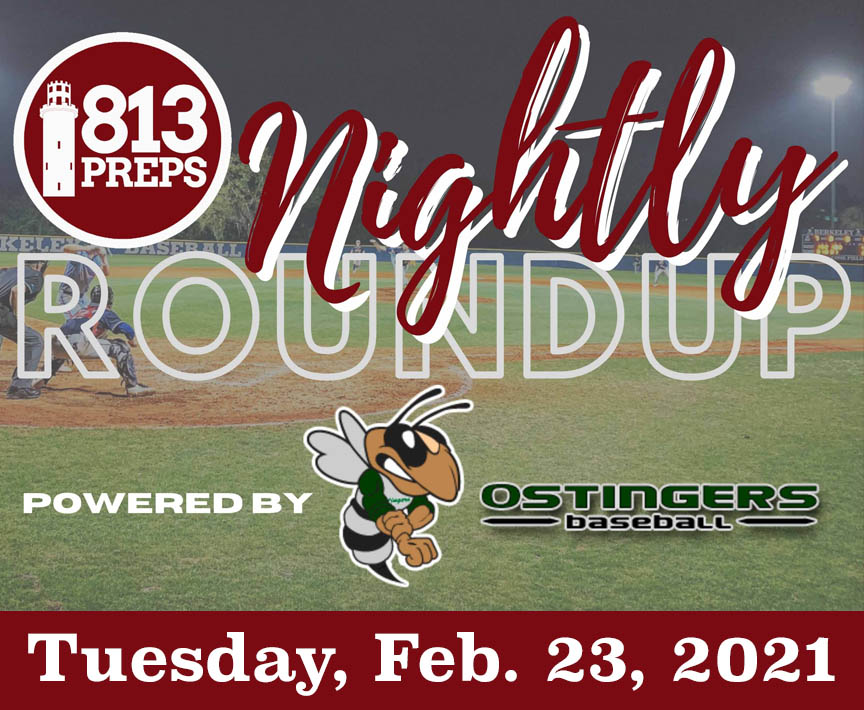 Sophomore Cade Kurland broke open a stalemate in the seventh with a two-run homer to dead center as Berkeley Prep claimed an extra-inning victory on the road at Lakewood Ranch. The home run supported starting pitcher JT Quinn, who improved to 2-0 with seven innings of work, allowing just four hits, and striking out eight, before Andrew DiMisa finished it off with a pair of strikeouts to notch his third save in as many games.

CDS sophomore Andre Rameau tossed six innings, allowing two unearned runs as the Patriots won a home game against SLAM academy. Rameau scattered three hits and struck out five, before giving way to Logan Babb, who finished off the game and earned the save.

Nathan Vong pitched five clean innings before running into a bit of trouble in the sixth, but Marques Smith took over on the mound, got out of a jam and struck out the side to end the game. Remer McIntyre had an RBI double to plate the Tigers run in the first, and Cameron Williams had a pair of hits in the win.

Joey Wey tossed six shutout innings for Freedom, allowing just two hits and striking out 11, before Kerry Wise finished things off on the mound and earned the save. Raul Olivera and Lucas Richardson had a pair of hits each to lead the offense.

Arjun N drives in the first run of the game with this deep double. Crest up 1-0, still hitting in the T8. @813Preps pic.twitter.com/uuGbGsV4Ro

Strawberry Crest broke open a scoreless, district battle on the road at Leto in the eighth inning when Arjun Nimmala doubled in a run, and later scored an insurance run on a wild pitch. The Chargers got six scoreless on the mound from senior Colby Fanning (4 hits, five strikeouts), before Bryan Boully entered in relief and earned the win with two scoreless frames. Bryan Rivera pitched five shutout innings of his own for Leto, while Shabazz Brumley and Alberto Attias each had two hits for the Falcons.

Ben Drumheller’s RBI single in the fourth proved the difference as the Ravens won on the road at King. Drumheller and Zen Hiatt also earner RBI walks in the seventh to further pad Alonso’s lead. Hector Montilla worked five, shutout innings against King, allowing just two hits and striking out nine, before Drumheller finished things off and earned the save with two innings of work. Sammy Seplowe scored twice, and Christopher Morgan was 2-for-3, with a double and a run scored.

East Bay’s Rocco Vincent, Tanner Elizondo (first hit of the season) and Alek Mangual each homered in a decisive win for the Indians at Blake. Pitchers Nate Jackson and Javy Lopez combined to allow just one Blake hit.

Tough 1 to 0 loss to a very good @AHSbloodhounds. Great outing from @Mr_Exclusive14 with 13 K’s took the tough loss. Back at it on Thursday as we travel to play @EastBayHighBas1 at 7pm. @813Preps @AllOnBaseball @BCPbullpen @Biggamebobby