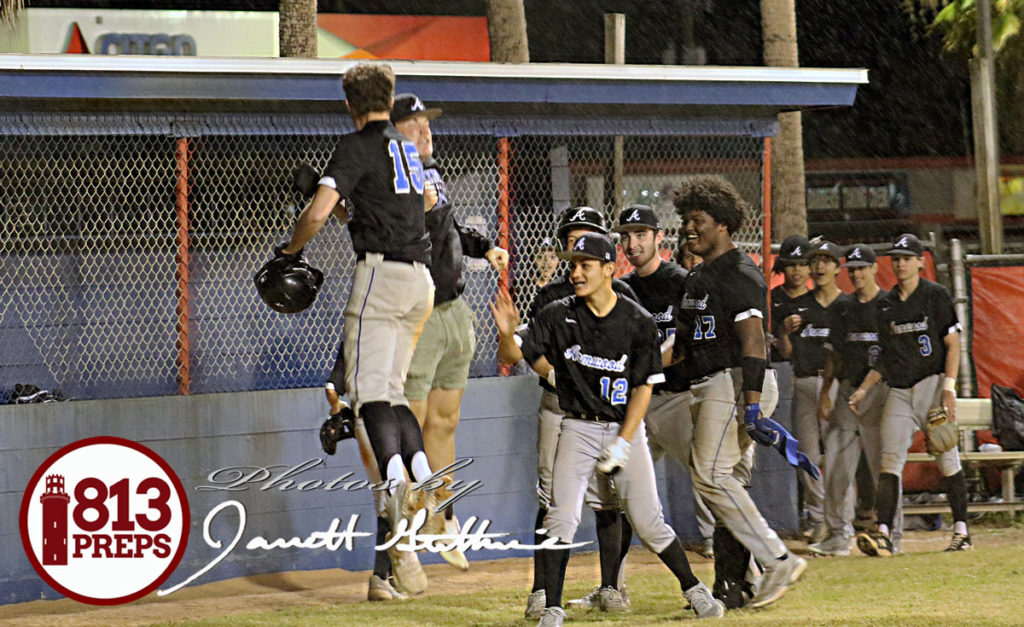 Armwood junior Justin Corns leaps in celebration as he’s greeted by his teammates after his third-inning, two-run home run.

TAMPA – Armwood’s Justin Corns managed to send a skipper up-the-middle for a single in his first at-bat, but admitted after the game his timing was a tad bit off to start things at Tampa Bay Tech on Monday night. To say the junior’s had fully caught up for his second AB would be an understatement, as Corns unloaded on a belt-high fastball sending it into the misting rain and over the wall in right for his first high school home run.

“My first at-bat, my timing was a little off, so I knew in the second I had to get my foot down and if the fastball was there I was going to take it,” Corns said. “Off the bat, I knew I hit it well, but I ran as hard as I could to first until I saw the ball clear. That was a great feeling.” 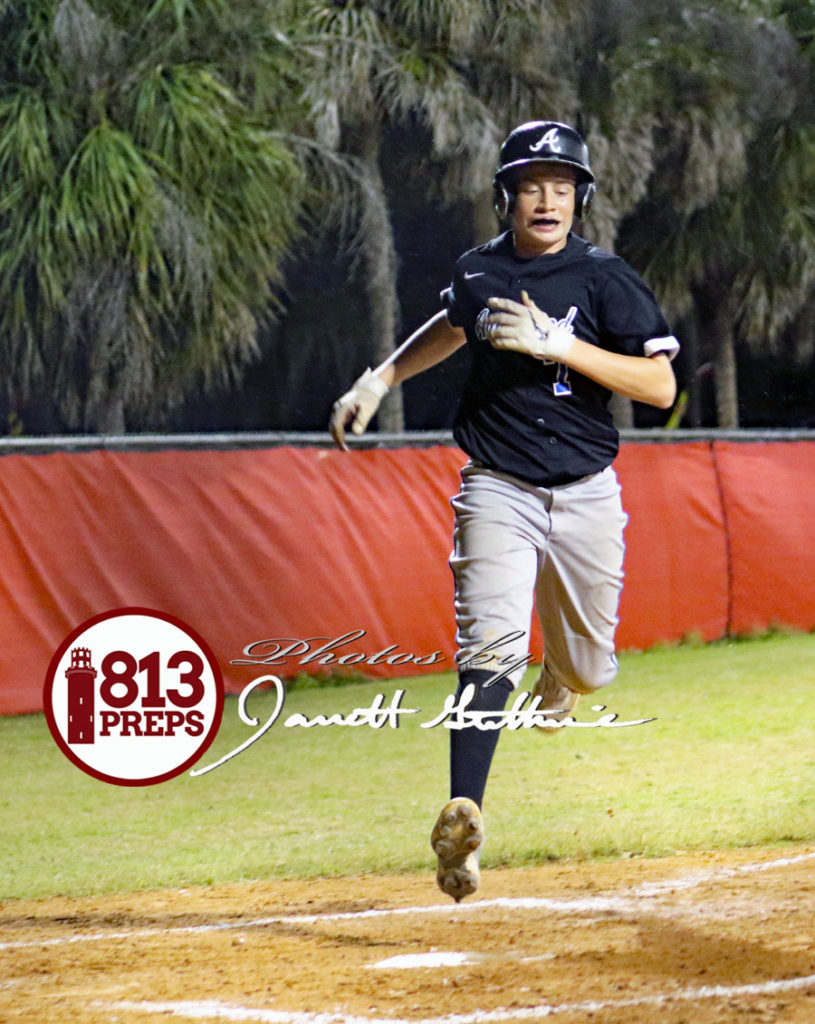 Armwood’s Antonio Rodriguez scores in the second inning to give his team a lead it would not relinquish. Rodriguez later had an RBI double for the Hawks.

The two-run, round-tripper added the insurance needed as the Hawks applied pressure throughout and claimed a Class 6A-District 8 victory over the Titans, 9-2.

However, the homer wasn’t the only highlight for Corns on the evening. In the home sixth, Alex Jackson belted a ball deep for a double for Tech, just beyond the sliding Corns in center. With a runner on first and headed to third, Corns regrouped, grabbed the baseball and uncorked a throw into the infield and the Titans runner was caught too far off third base, eventually being run down by catcher Jose Figueroa to cut the baserunners in half.

Though Tampa Bay Tech (1-2) was able to scratch out a run that inning on a Roderick Johnson Jr. single, the chance to rally fell flat with the miscue on the base paths.

“When I saw that I didn’t have (the catch), first thing I thought was get the ball and get it in,” Corns said. “I saw my cutoff waiting at the lip of the grass and just threw it with everything.” 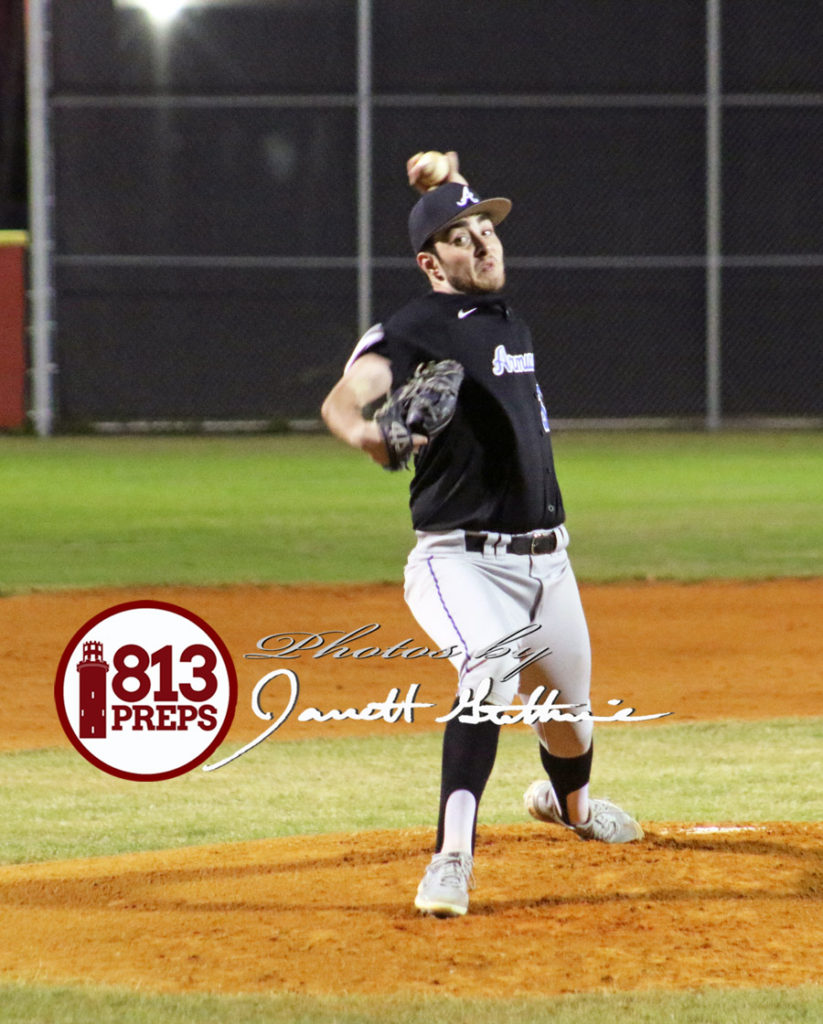 Starting on the mound for the Hawks, senior lefty Sam Simmons was steady in 5 2/3 innings of work, allowing just a leadoff double to TBT’s Javion McKay to bite, when McKay stole third and scored on a passed ball. Simmons limited the Titans to just four hits, while striking out four to earn his (and his team’s) first win of the season.

“I knew if I came out here and threw strikes that my defense would have my back,” Simmons said. “After some runs, my confidence just grows and it’s just about going out there and having fun with the boys – seeing how much fun I can have. And it’s ‘let’s have a great night.’”

In counter, Tech sophomore Ethan Jones had swing-and-miss stuff, striking out seven – following up on his 14-K performance in the Titans opening night win over Blake – but also allowed eight hits to chase him from the game after four-plus innings. Junior Evan Mobley struck out five going the rest of the way, with just one hit producing two unearned runs. 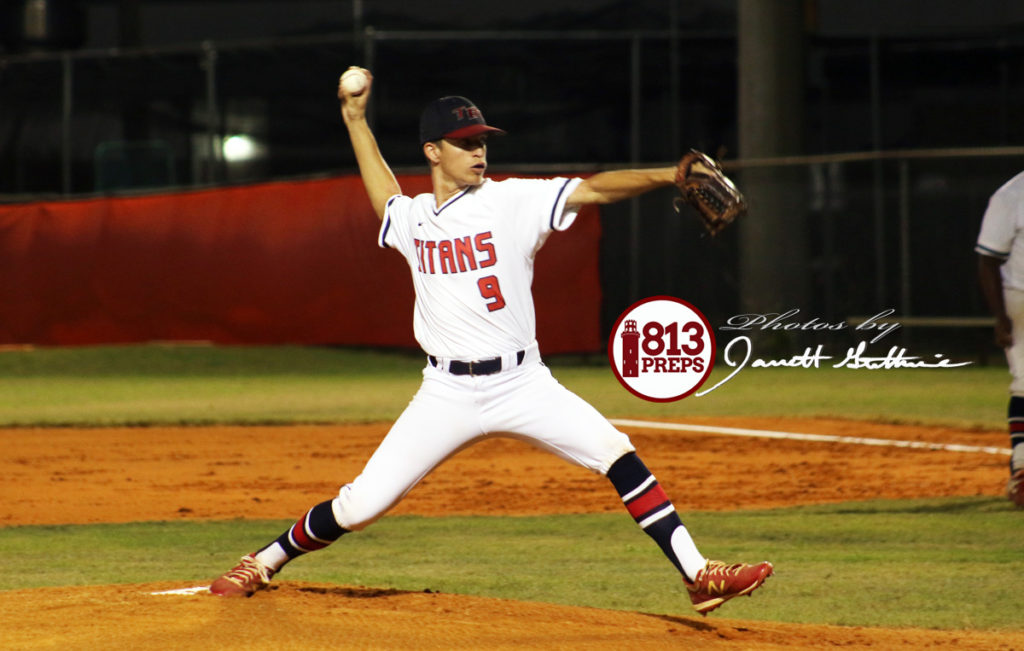 Hawks sophomore Antonio Rodriguez had a pair of hits, including an RBI double, while KJ Leshko doubled and scored the game’s first run, and Dexter Avery had a single in the second, stole a pair of bags and scored the deciding run on a Matthew Hall hit.

For Armwood, sophomore Michael Hull worked the final four outs of the game on the mound, striking out one and not allowing a hit.