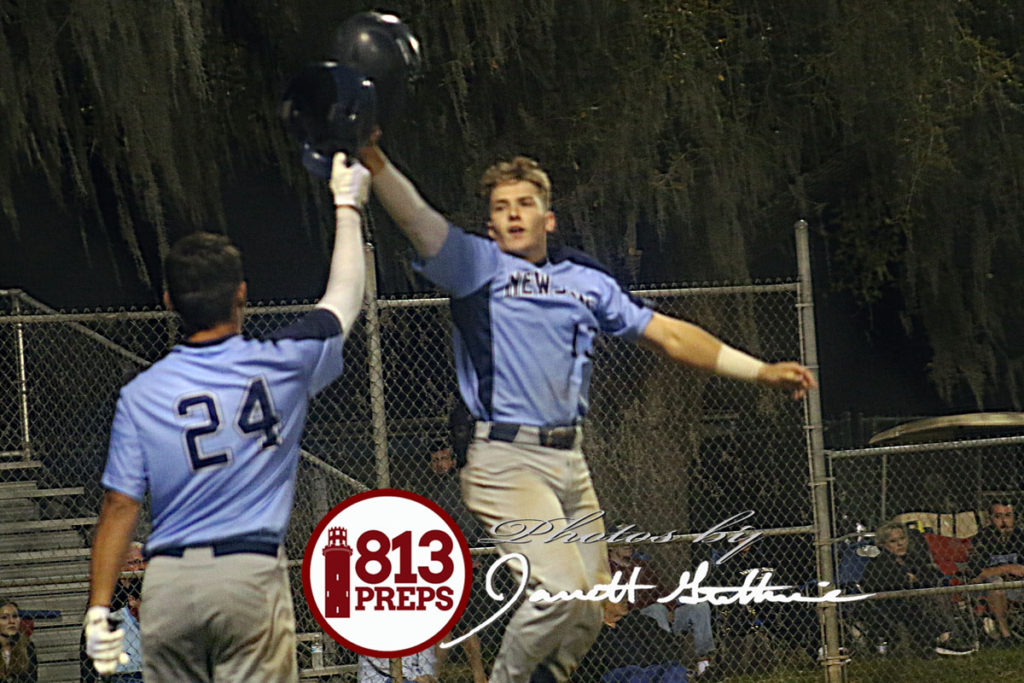 RIVERVIEW – A senior looking to lead his offense to a first win, and a freshman who made the most of his early varsity opportunity proved the difference makers as Newsome rallied late to overtake Riverview, 5-4.

Newsome senior Kelsen Johnson was looking to shake off a two-loss skid to start the season and wasn’t ready to go quietly on the road against the Sharks on Tuesday night. Down three runs, Johnson stepped to the plate in the sixth and cranked his first home run of the season to cut the lead to a pair, then capped a comeback in the top of the seventh with a game-deciding RBI single.

Kelsen Johnson with an RBI single to give his team the 5-4 lead in 7th. pic.twitter.com/ZcRPYwfct1

The senior backstop’s battery-mate to close out the game was freshman righty Ryan Spitzer, who after the game, said his nerves were peaked entering to start the home-sixth, and that resulted in some over-throwing and a leadoff double from Sharks pinch-hitter Jonathan Smith, followed by a walk. But Spitzer showed poise, retiring three straight and stranding a pair. And looked every bit the veteran, when an error allowed the first runner to reach in the seventh after the Wolves offense gave him the lead, by working around a few base runners and punctuating his victory with a game-ending strikeout.

“When that error happened, in my mind, I decided to really bear down and throw strikes,” Spitzer said. “If you keep pounding the zone, throwing strikes, usually good things will happen.” 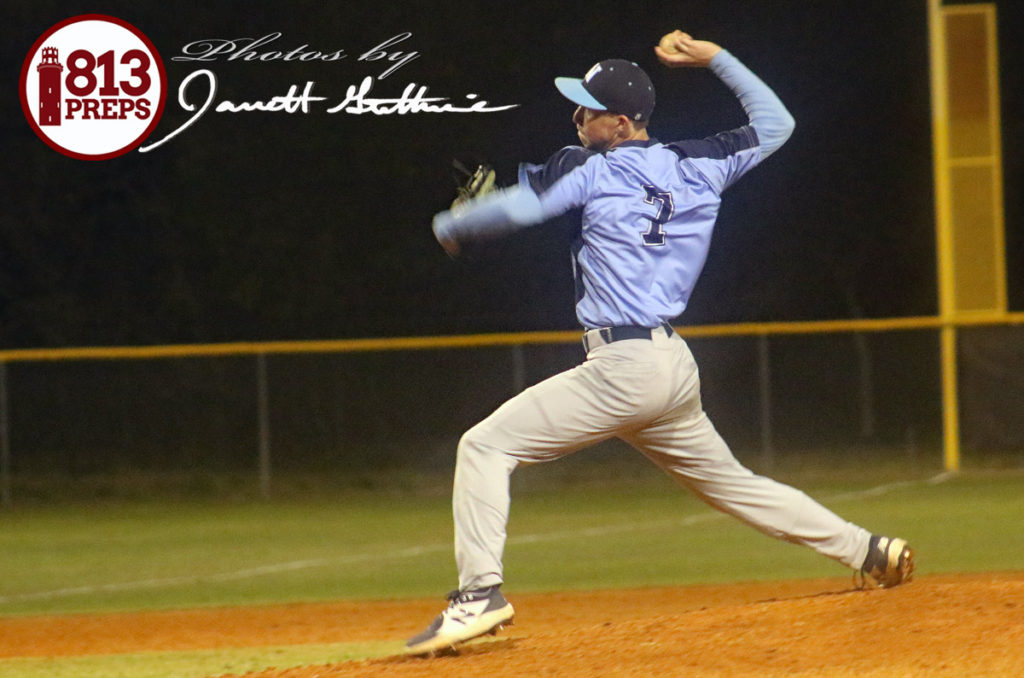 Newsome freshman Ryan Spitzer entered the game trailing, but pitched around some trouble and was rewarded when the Wolves offense put up three in the seventh with his first varsity victory.

The young righty was awarded the game ball by Wolves coach Dick Rohrberg, and said he mixed two pitches in with a healthy dose of nerves on the mound, but said he didn’t dwell on allowing a base runner or two.

“I was happily surprised as a freshman to be put in that situation, and, I was pretty nervous, too,” Spitzer said. “Once I got out there mainly my fastball, and also my curveball were working … I was just happy that I kept battling.”

Johnson, who reached base in all four of his plate appearances, went 3-for-3, also adding a third-inning RBI single, and said he thinks after a tough loss to Wharton in his team’s opener and a flat performance against Bloomingdale last week, having to push themselves late for a win could be the catalyst needed for a young Wolves team in 2021.

“I think this was good for the team, having to work just that extra bit harder to get this first win out of the way,” Johnson said. “This was a big deal, with a bunch of new guys. Last year our guys got their season cut short, and I really think this is the kind of win that can get momentum going and start us rolling.” 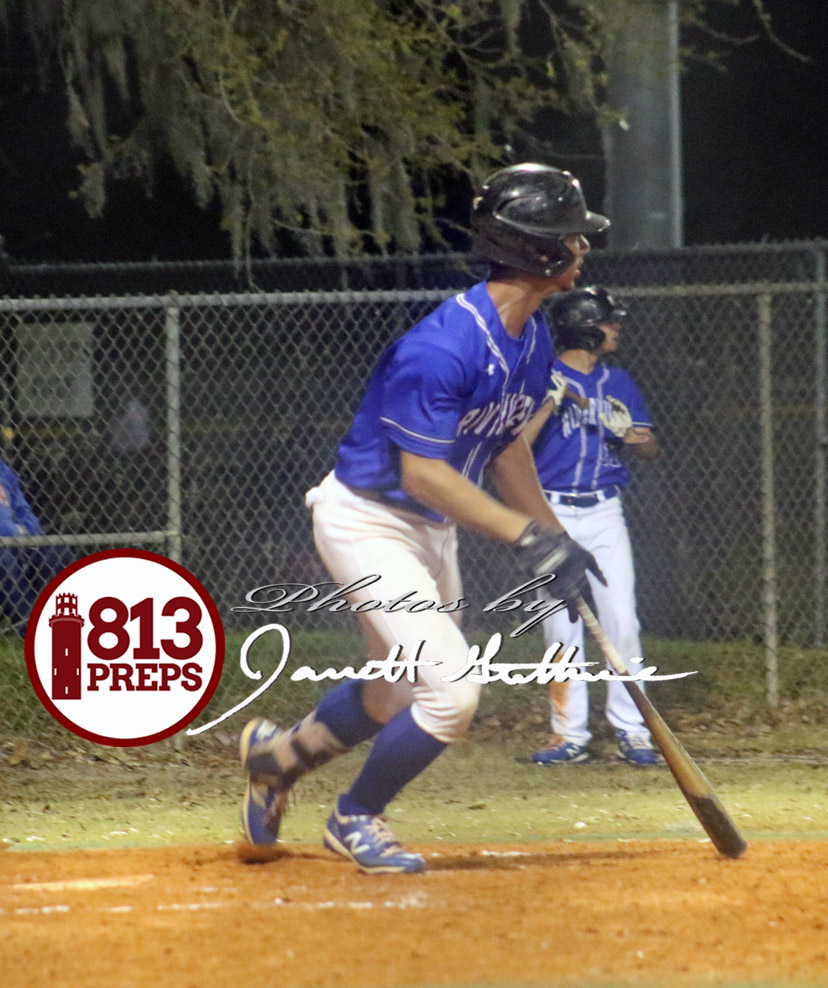 Sharks senior captain Gavin Hunter sneaks a peek as his two-run double sails down the third baseline in the fifth.

Riverview (1-2) answered Newsome’s opening salvo in the third when Caden Santucci (who also made two great plays in centerfield) doubled and scored on an error. Then the Sharks took the lead with a three-run fifth, which included four-straight, one-out hits highlighted by a two-run double off the bat of senior Gavin Hunter. However, the lead was not meant to last as the Wolves clawed back and took the victory.

Sharks senior lefty Ronnie Brandon pitched very well through 6 1/3 innings but just couldn’t slam the door closed on the Wolves. Brandon was removed prior to Johnson’s game-deciding single in the seventh and took a tough loss, despite scattering five Wolves hits and striking out four. Senior Nolan Lalond had a pair of hits and a run scored in the loss, and Fisher Weeks had a single and an RBI sac fly for Riverview.