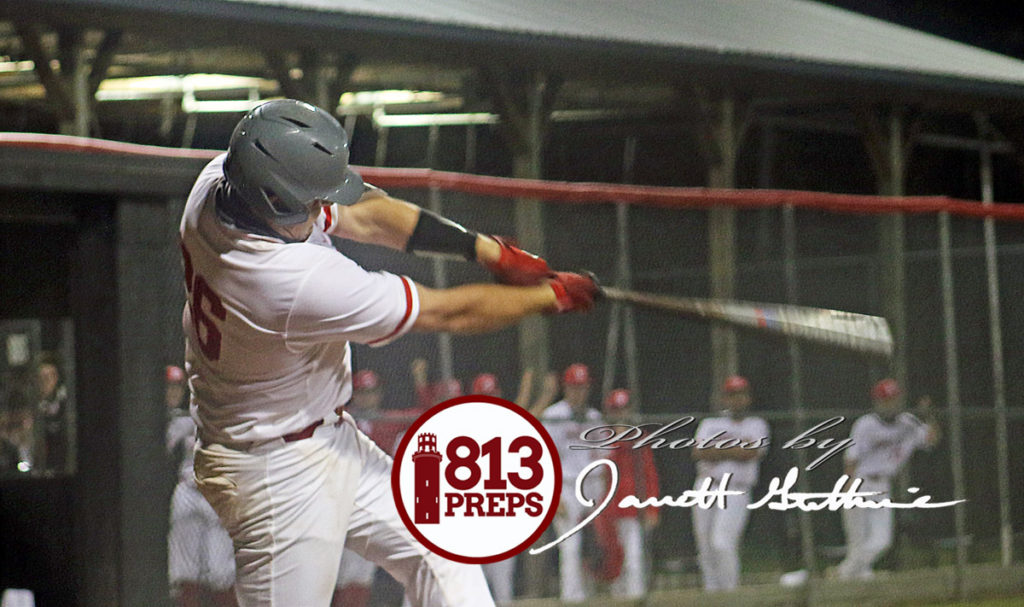 Bloomingdale senior Wyatt Strickland connects on a full-count curveball tying the game in the first with a two-run home run – the first of his high school career.

VALRICO – A little insider knowledge on your opponent never hurts. When Bloomingdale senior Wyatt Strickland watched a curveball break over for a strike to fill the count in his first at-bat, the Bulls four-hole hitter said he had a pretty good hunch Strawberry Crest starting pitcher Bryan Boully would go back to the breaking ball to try to get the out. Strickland waited for the belt-high offering and smashed it over the wall in left, erasing the Chargers early lead with a two-run homer – the first of his high school career.

From there, Bloomingdale junior Jack Owens carried the water working six innings, striking out eight as the Bulls remained undefeated and handed Strawberry Crest its first loss of the season, 5-2.

“We know (Boully) really well and know he throws hard, but when he hung that curveball to make it three-and-two, I thought he might go back to it,” Strickland said, “and I guess I was correct on it.”

It was a little bit more than a guess Strickland would admit, as he and Boully spent the summer as battery-mates with the Ostingers travel ball team, saying he was waiting for that pitch to come around again.

“I was his catcher and I know how he throws, how he thinks,” Strickland admitted. “It helped a lot … I knew from the beginning he was going to throw me a few curveballs.” 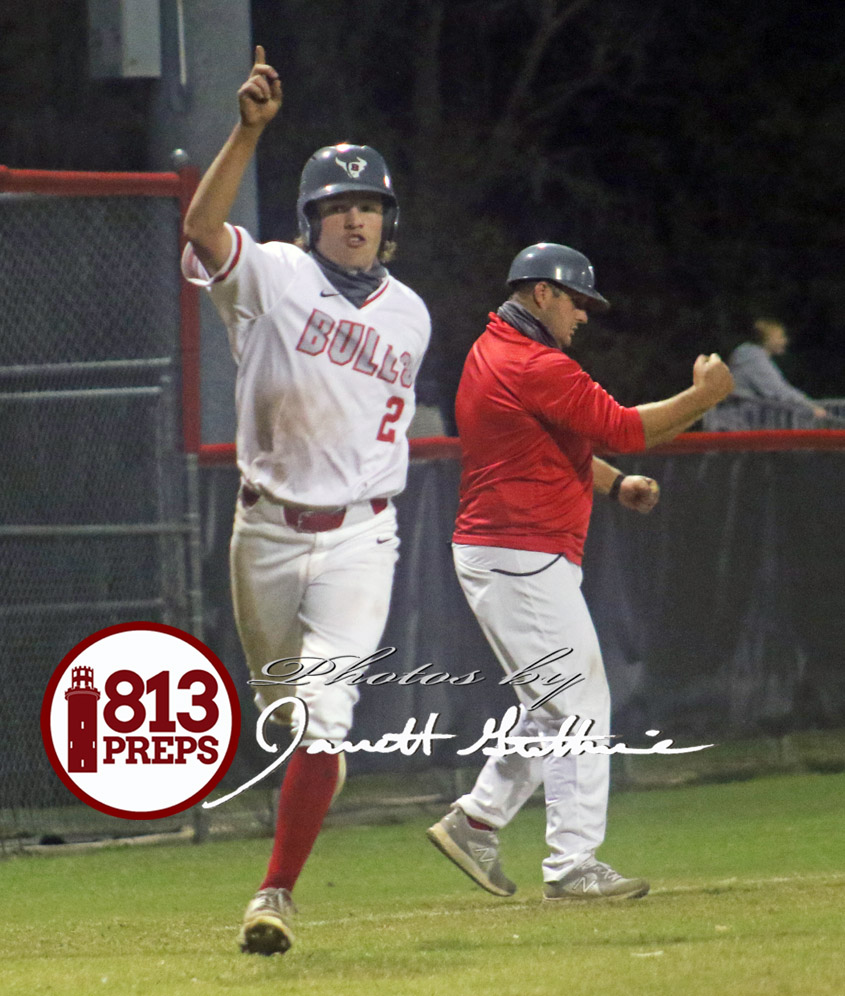 Drake Harman trots into the plate on Strickland’s homer, as Bulls coach Kris Wilken celebrates in the background. Harman added an RBI single and scored a second time in the win.

Bloomingdale (5-0) broke the early stalemate in the second when Carlos DeJesus singled and scored on an error and Drake Harman (1-1, two runs scored) added an RBI single for insurance. A fifth-inning balk allowed Harman to score the game’s final run for the Bulls.

The hot start to the spring is something Bloomingdale head coach Kris Wilken said he was ready for in the weeks leading up to the season.

“Honestly, I don’t want to speak too soon, but they have pushed me out of the way,” Wilken said. “This is their season, and I make sure they practice hard and are prepared, but once we get in the games this has been all them.”

In the top of the first, Strawberry Crest (3-1) got a first-pitch single up the middle from Colby Fanning, who would eventually score on a throwing error from Owens and the Chargers would stretch the lead to two when Ethan Pues slapped an RBI line drive single to center. 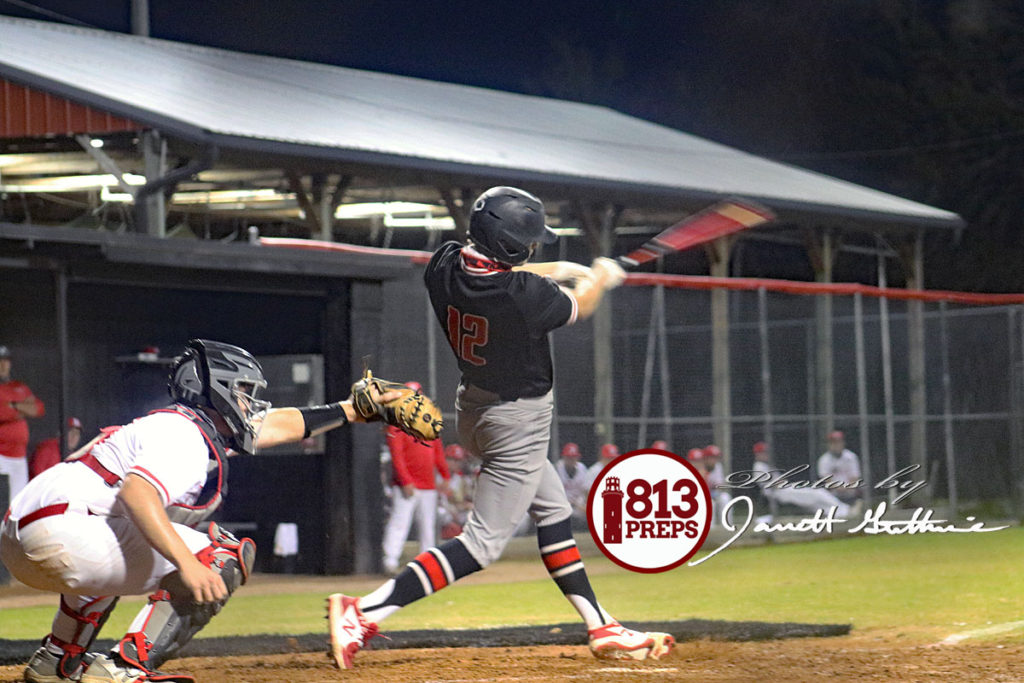 Chargers junior Ethan Pues connects on an RBI single in the first inning. Pues also made a nice diving catch in right in the second.

The two unearned runs would be all Owens, a Stetson commit, would allow on the board, working smoothly for the next four innings. Owens ran into a little trouble in the sixth, when an error and two walks loaded the bases, but he kept the runs off the board and earned his second win of the two-week-old season.

“I knew I have a great defense, so late in the game I had to forget the walks and get it over the plate and let them hit it,” Owens, who also has a save on the year, said. “I’m really excited where I am at this point in the season and can’t wait for the rest of the season. This is just getting started.” 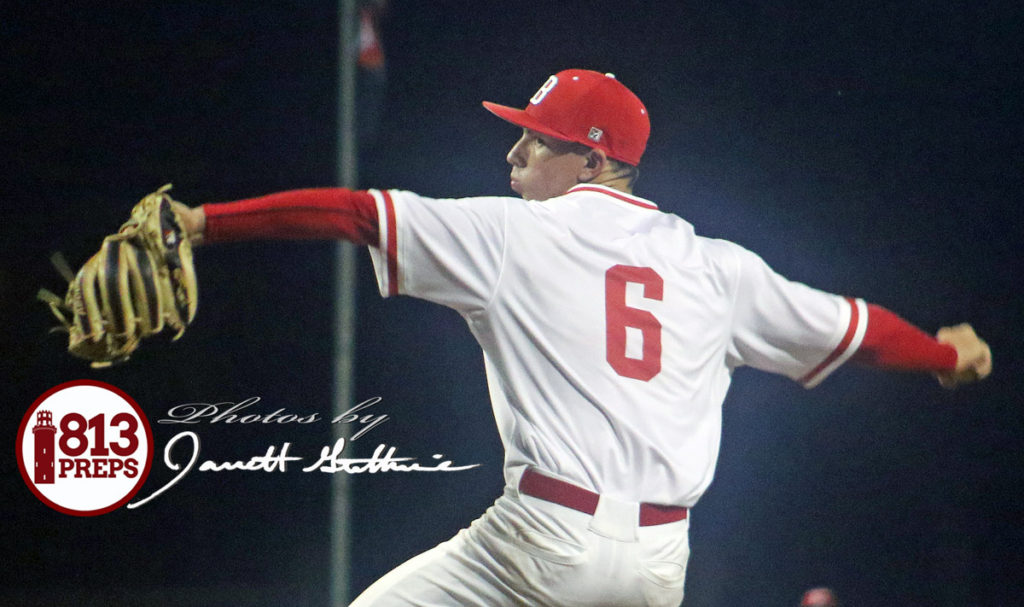 Zack Redner’s two-out double to left in the fourth inning was the only other hit Crest recorded off Owens, before sophomore righty Trey Wilson slammed the door shut with a three-strikeout save.

Pues made a great catch in right field in the second, and both catchers caught attempted base stealers with Strickland ending further damage in the first with a strike-em-out, throw-em-out double-play throw to second, followed in the home half when Damien Bennett hosed a runner at third base. Boully worked three on the mound for Crest, allowing three earned and striking out three, while Luke Richardson came on in relief working the final three innings, and striking out four.

After the game, Wilken said the early-inning jitters from both starting pitchers may have stemmed from the excitement from the summer-ball teammates squaring off.

“I think Jack and Boully were so amped up to face each other and everyone was talking about this matchup and how it was going to be a race to one,” Wilken said. “I think they both came out trying to throw too hard and over spin breaking balls, but once they both settled down honestly, they both were pretty good. Jack was just a little bit better tonight.”