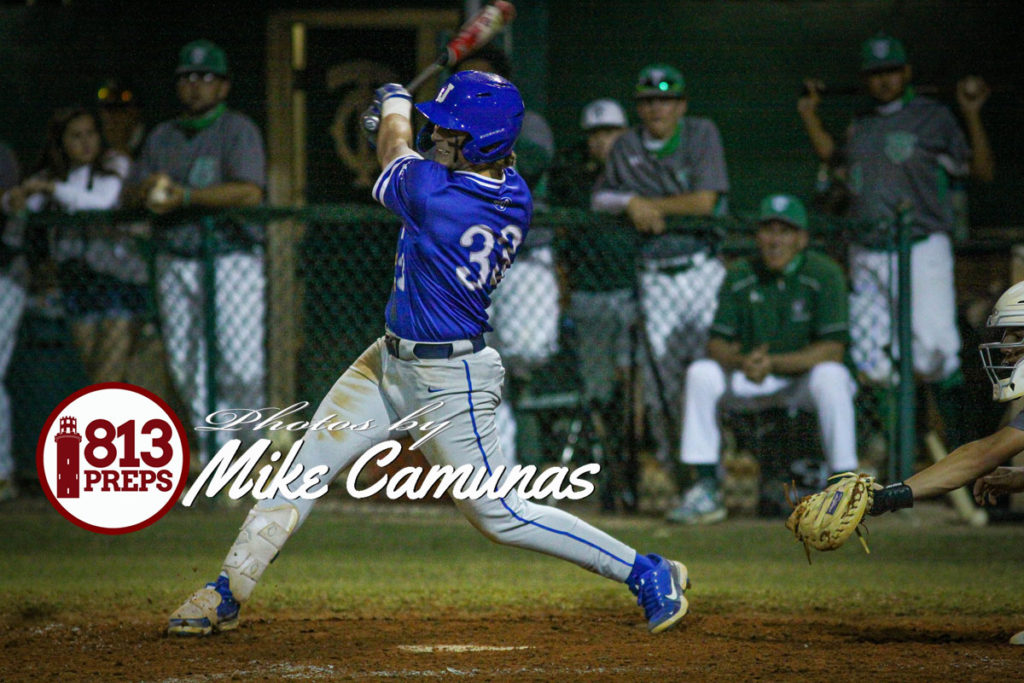 Jesuit senior infielder Nick Rodriguez was halfway to a cycle in the Tigers’ 12-0 blowout of rival Tampa Catholic after hitting a three-run bomb in the first inning and a triple in the third for a five-RBI night (photo by Mike Camunas).

TAMPA — Nick Rodriguez said he wasn’t thinking about it, but, even if he was, can anyone blame him?

“I was just trying to do all I could to help the team, but I couldn’t get the two easiest ones, so that happens sometimes,” the Jesuit’s senior infielder said with a laugh, referring to how the Charleston Southern commit, in his first two at bats, was halfway through the cycle thanks to a first-inning home run and then a third-inning triple. “I didn’t really care about the cycle, but if it happens, it happens.”

What did happen is Rodriquez finished the night with five RBI as Jesuit rolled past its storied rival, Tampa Catholic, 12-0 in a five-inning mercy-rule game. B.J. Graham, Cole Russo and Tyler Corish each drove in a run, while Miguel Menendez, Jr., drove in two, as well.

“Our lineup is pretty scary,” Rodriguez added with a grin.  “I think top to bottom, we can hit all the way around. It’s just that we’re always hitting, no matter what.”

Always hitting led to 14 of them by Jesuit (4-0), while, not for nothing, three pitchers — Alden Segui, Dominic Castellano and Ryan Denison — combined to throw a no hitter, while striking out 12. Tampa Catholic (3-2), however, did have two baserunners: a walk in the second by Baraka Andrews and a dropped third strike in the fifth that allowed Charles Williams to eventually reach second base.

The Tigers have not lost this matchup since the Crusaders took both games in the 2018 season — in which both were hotly contested 4-3 TC triumphs.

And in the four games since then — the two only played once in 2020 before the season was lost — the Tigers have outscored the Crusaders 37-2.

Though Rodriguez agrees that facing the longtime, albeit (most of the time) friendly, rival is always a big game, the players have to look past that and still play said big game.

“It’s a big game — TC is always a big game,” he added. “Though we just have to get on with it. We have to take care of our business and walk away with the win.”