Backed by his defense, Hook leads the way for Sharks 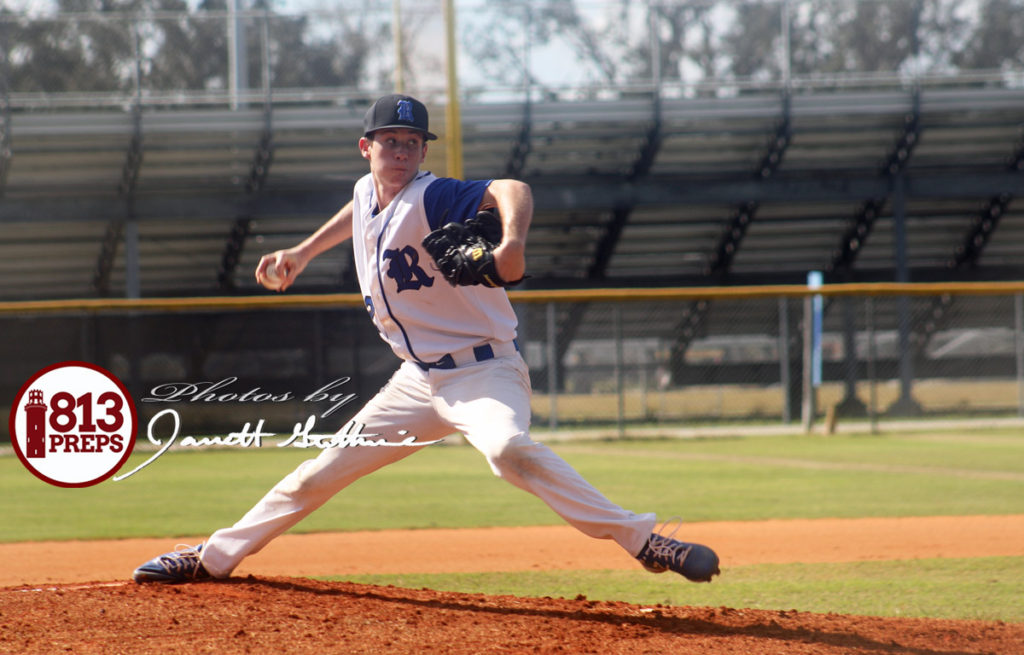 Riverview junior Nathan Hook picked up his second win of the season, tossing 6 1/3 scoreless innings and struck out five against Steinbrenner.

RIVERVIEW – Sharks pitcher Nathan Hook’s confidence in his defense was soundly rewarded on Saturday as the junior righty slung the ball consistently in the zone for six-plus innings as Riverview’s D stood tall and the combination handed visiting Steinbrenner a 4-0 defeat.

Hook held the Steinbrenner to six hits, tossing 6 1/3 scoreless innings and struck out five on the day to earn his second win of the season. A pair of doubles from the Warriors and a wild pitch with two aboard moving runners into scoring position threatened, but Hook worked around trouble the whole way.

Riverview (2-2) loaded the bases in the third before a Farah Castillo RBI groundball sent Adrian Rolon across the plate for the eventual winner. The Sharks added three more in the sixth inning as senior Gavin Hunter singled to left, Adrian Rolon kept things going with a two-out single that drove in two more, and John Smith had a single, stolen base and run.

“I needed to add some support to our pitcher,” Hunter said. “I knew for him to come out and throw comfortably those extra runs on the board were going to be big. I got the opportunity with guys in scoring position and went to work.” 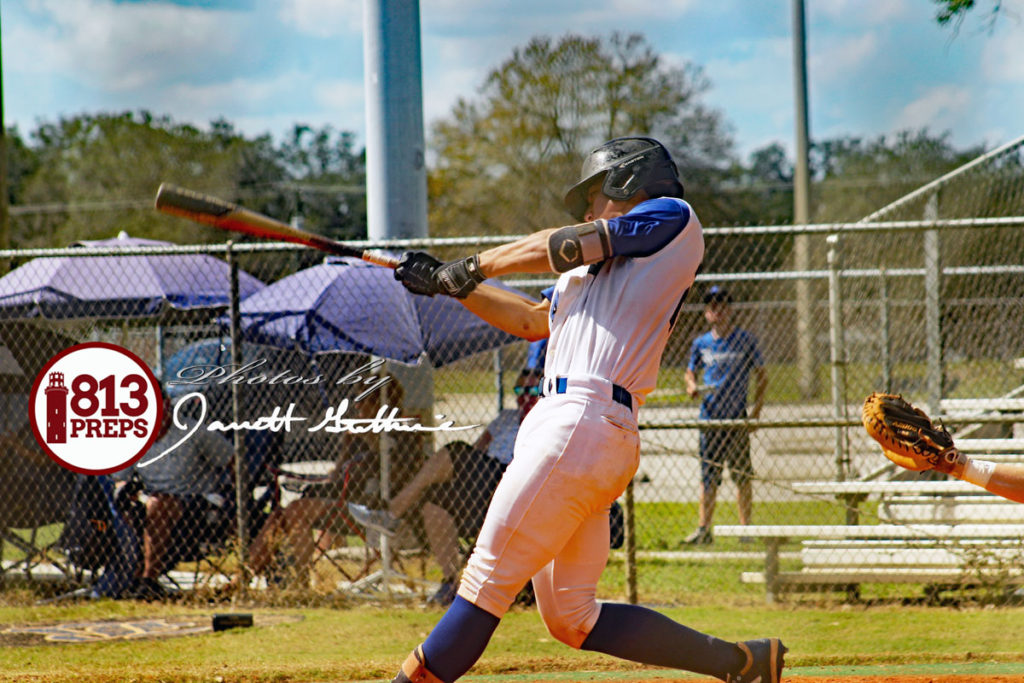 Hunter, who also had a two-run double in a tough loss to Newsome on Tuesday, also made his mark defensively Saturday morning from behind the plate erasing an early Sharks error to catch a runner trying to swipe second in the opening frame.

“I got a great feed from Nate, fastball away,” Hunter said of his caught stealing. “He gave me the opportunity and I was able to get that out.”

The Sharks defense had a number of impressive plays a nice, rangy play and glove flip for an out from Castillo at second, solid work from shortstop Christian Tavarez, even Hook made a nice attempt off the mound, flipping a ball backwards toward first but not in time to get James Strom busting down the line and reaching on an infield hit.

“I know I have a couple of guys behind me who can do some things,” Hook said. “It brings a lot of pressure off of me, allows me to pound the zone carefully, and safely knowing there are plenty of guys behind me ready to make plays.”

The defensive gem of the day though goes to left fielder Nolan Lalond, who caught a fly ball in the third and unloaded a throw to the infield, beating a runner trying to take third after tagging up on a flyout by three steps.

“Don’t run on our outfielders,” Riverview coach Jason Smith said with a chuckle. “I’m our outfield coach, and no credit to me, those boys can play. They’ve put in work in the weight room and their arms are way stronger than they’ve ever been.”

The struggles for the Steinbrenner (1-5) offense taking advantage of chances continued on Saturday. The Warriors had runners reach scoring position five times, but couldn’t get the hit to but a run on the board. Senior Tyler Reynolds was 2-for-3 with a double and Charlie DiCampli had a pinch-hit double in the seventh. 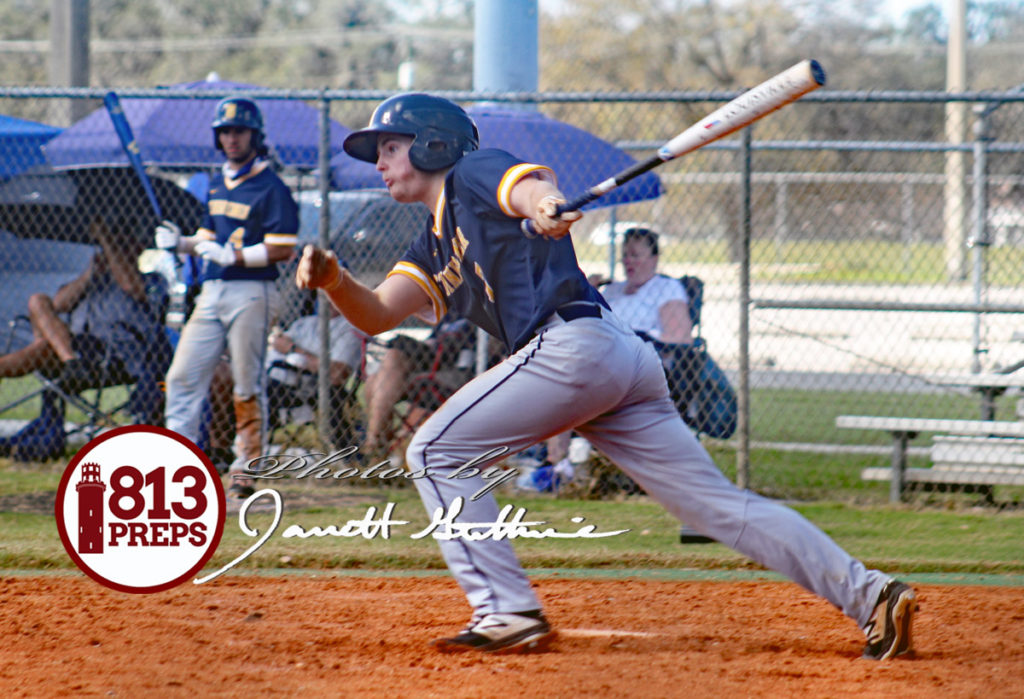 Steinbrenner senior Tyler Reynolds follows through on a fifth-inning single for the Warriors. Reynolds also had a double in his first at-bat of the game.

The DiCampli double forced Smith to make the call to senior Kipp Kochera to relieve Hook, and the senior righty got a flyball and groundout to pick up his first save of the season.

“I definitely wanted to finish it – more than anything,” Hook said, “but I had no doubts in Kipp, knowing he was coming in and would close it out for me.” 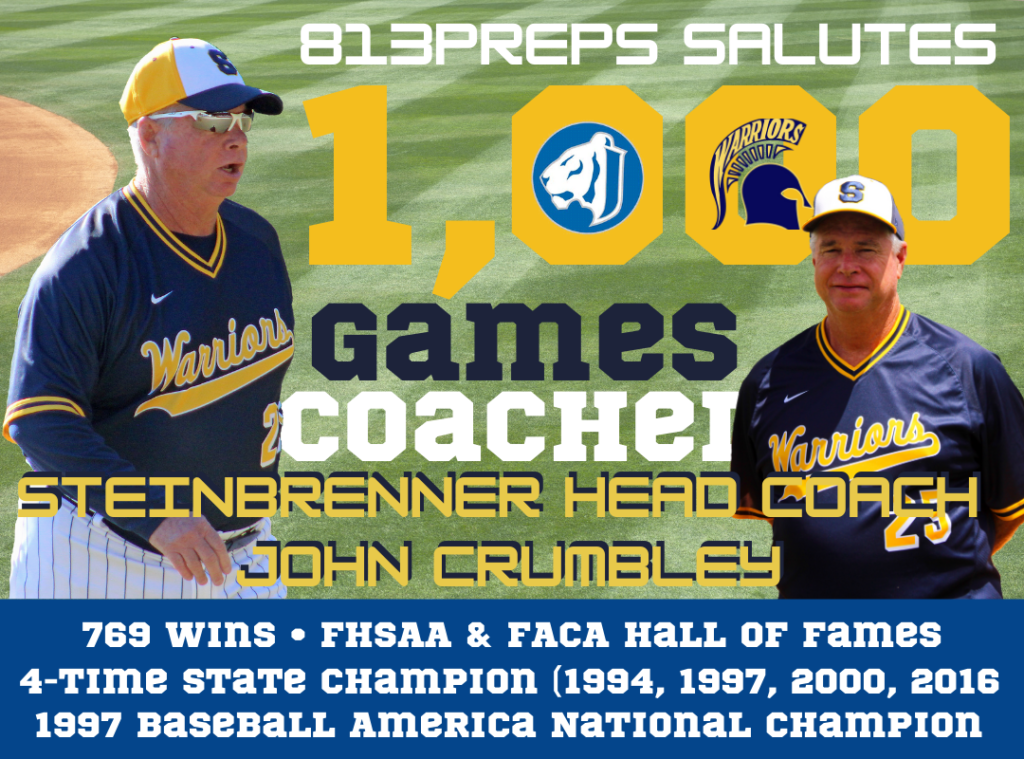 Though not the outcome he would have liked, 813Preps wanted to take a minute and salute Steinbrenner head coach, FHSAA, FACA and Sports Club of Tampa Bay Hall of Famer John Crumbley on his 1,000th high school baseball game coached. Congrats, Coach Crumb!