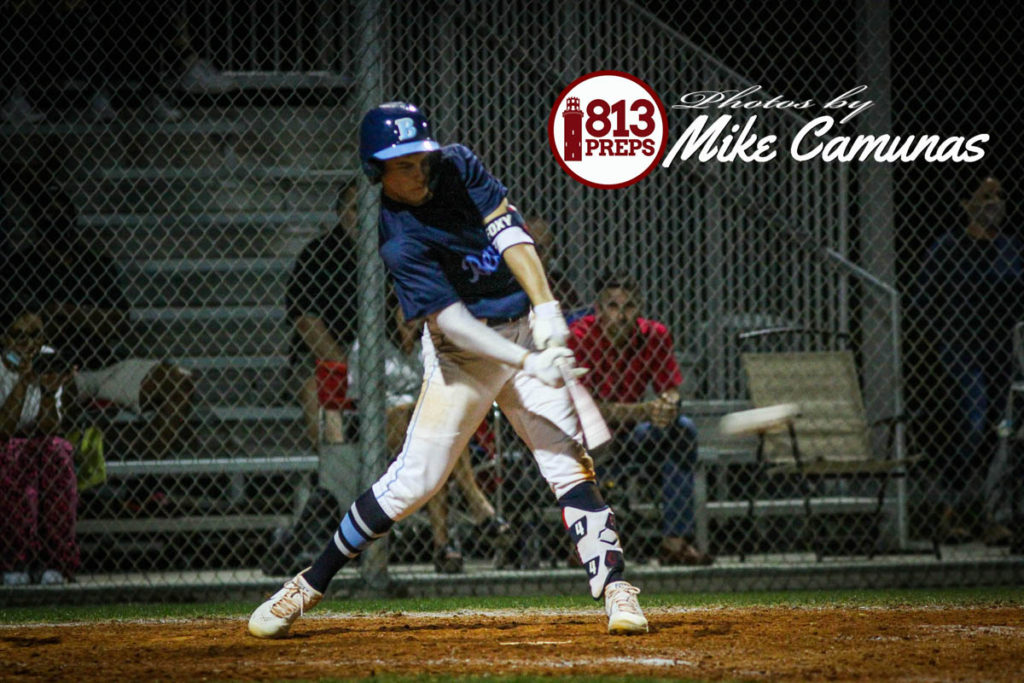 Berkeley Prep sophomore shortstop Cade Kurland connects for an RBI single in the fourth during the Buccaneers 10-0 win over Tampa Prep, as Kurland had a game-high three RBI thanks to a two RBI double in the second (photo by Mike Camunas).

TAMPA — The last time someone said buccaneers were this deep, surely Davy Jones’ Locker was involved.

And thanks to a 5-1 start, including Tuesday evening’s brisk 90-minute 10-0 mercy-win over nearby fellow private school Tampa Prep, it’s becoming evident that these Buccaneers know exactly what they’ve got on the roster.

“We’re just getting it going,” senior captain Johnathan Bruno said after going 3-for-3 with two RBI in the win. “It’s just the beginning of the season, so we haven’t even gotten (sky) high yet, but we’ll see where all this takes us.” 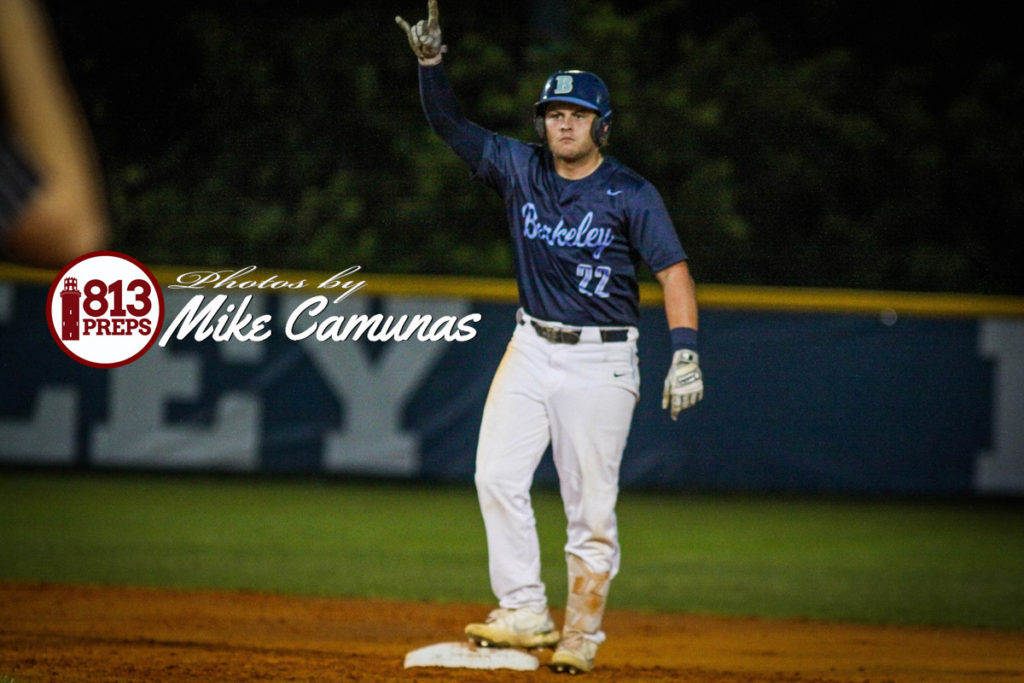 Berkeley Prep senior infielder and catcher Johnathan Bruno celebrates a double in the second inning of the Buccaneers 10-0 win over Tampa Prep, as Bruno had two RBI after going 3-for-3 on the night (photo by Mike Camunas).

Difference of opinion of the verticality of the Buccaneers notwithstanding, Berkely is still pretty high, outscoring opponents 31-12 despite a tough 6-4 loss to Lakeland on Saturday.

Add that to facing touted MLB Draft Prospect Jose Pena, who was on the mound for the Terrapins (2-3) on Tuesday, with several scouts in attendance. With a fastball in the mid 90s and 12 strikeouts over 6.2 innings, Pena was looking to add to that total, except the Bucs had different plans. Following a scoreless first inning in which he got Berkeley into three groundouts, the Buccaneers jumped on the Terrapins ace and dropped seven runs on the FIU commit.

Owen McElfatrick and Cade Kurland would both drive in two, though Pena would go on to pitch another inning, throwing 71 pitches and finishing the night allowing eight runs on 10 hits, walking three and striking out four.

“He was as advertised — a great arm, power breaking ball,” Buccaneers coach Richie Warren said, “but our guys really concentrated over the last couple of practices and today in BP and to have a solid approach, and I think tonight proved that when we prepare, especially against a guy like him, you can have all kinds of success.

“That’s probably one of the better arms we’ll see all year, but we had guys that came out and played hard and the end result showed that.”

After the big second inning, it was all Buccaneers, as they dug deep and nearly everyone contributed. While Kurland would finish with a game-high three RBI, he would also score twice and add a stolen base, as Anthony Castillo, Andrew DiMisa and Troy Reader would all drive in a run. 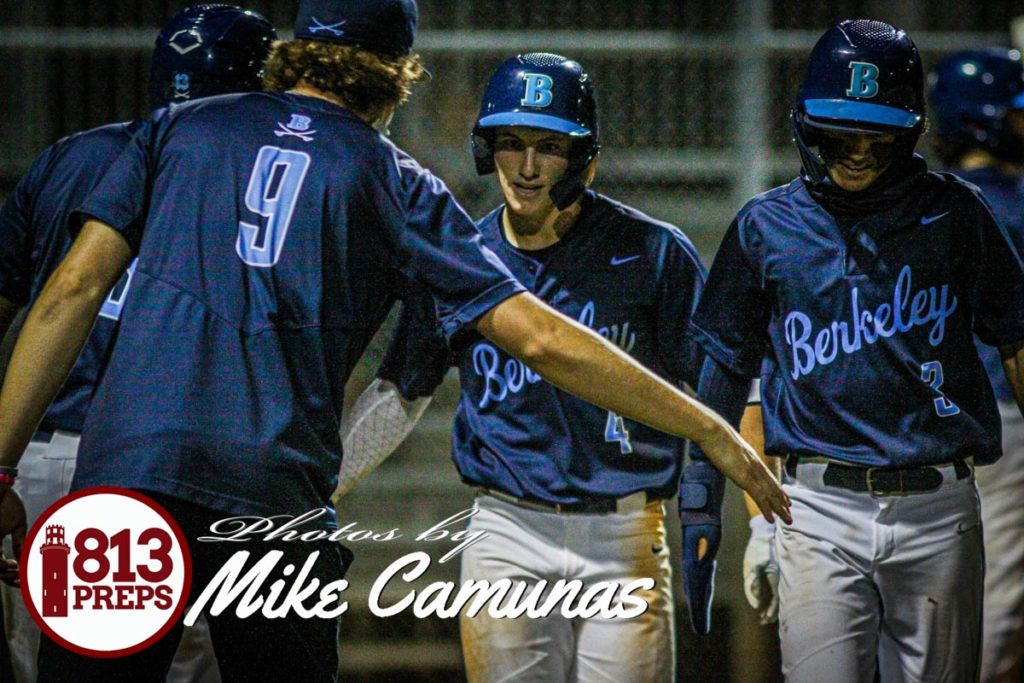 Berkeley Prep sophomore shortstop Cade Kurland celebrates scoring his second run of the evening with Anthony Castillo (3) and JT Quinn (9) in the Buccaneers 10-0 win over Tampa Prep in which Kurland had a game-high three RBI (photo by Mike Camunas).

And not to forget the other arms — Buccaneers’ starter, Will Parkinson, would pitch three shutout innings, striking out five while allowing just two hits and a walk, and reliever Matt Mulfinger struck out three and allowed a hit and walk, too.

So, as you can see, these Buccaneers are definitely deep. Even one of the team veterans as a sophomore sees it, too.

“We definitely have a lot of hitting, we have a lot of pitching — our team chemistry is probably the best that it’s ever been,” said Cade Kurland, who has been on the varsity team since seventh grade. “I don’t think there’s probably a better team in the state, in terms of chemistry and that has a lot of fun, too. That’s how I feel about us.”

Postgame interview with @BPBucBaseball sophomore shortstop @CadeFox4 who had a game-high 3 RBI and a stolen base in the ?‍☠️’s 10-0 over Tampa Prep @813Preps #hsbaseball ?⚾️ pic.twitter.com/neQNY9WtRf