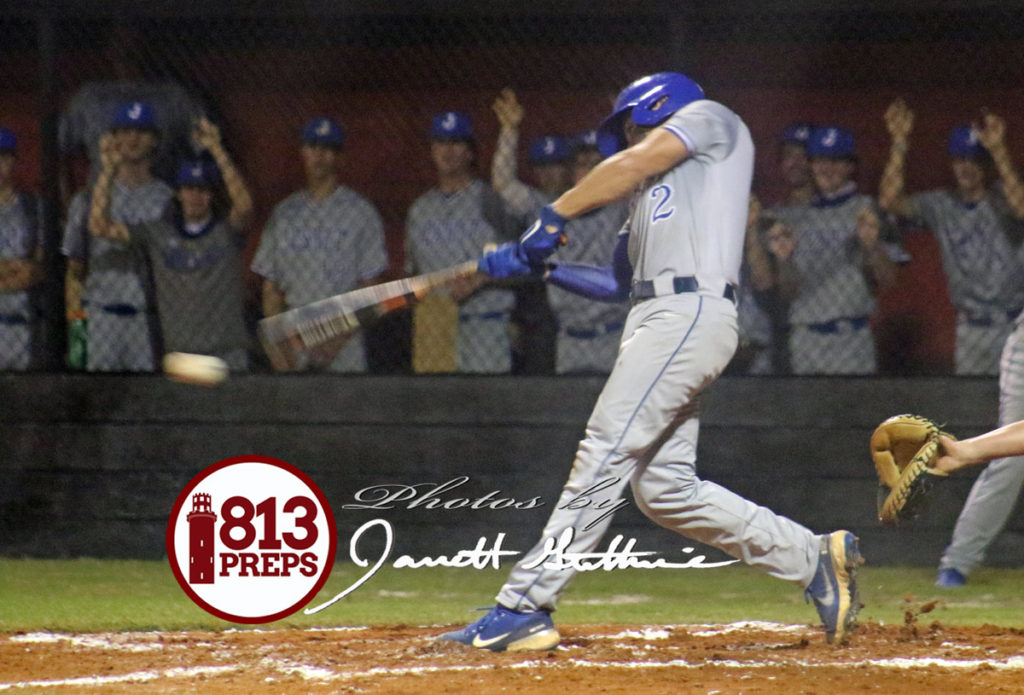 Jesuit senior Bradke Lohry drove the second pitch of the game down the line for a double, starting off his 3-for-4 night at the plate, which included one RBI and a pair of runs scored.

TAMPA – Making his varsity pitching debut, Jesuit sophomore Wes Mendes took to the rubber at Hillsborough Tuesday night with three runs in hand and quickly gave one back, walking the Terriers’ leadoff hitter Cameron Mallo, who promptly stole second and would score on a pair of wild pitches.

From there though, the Tigers lefty stepped on the gas working at breakneck speed that flummoxed Hillsborough’s bottom half of the lineup, as he tossed three strong innings including striking out the side in the second and Jesuit’s offense matched his velocity pushing the game way out of reach, winning the early-season district showdown 10-1.

“When I get in my zone, I just go really fast,” Mendes said. “That’s just how I work, it wasn’t some strategy just for (Hillsborough), it’s just how it is when things are going right for me.” 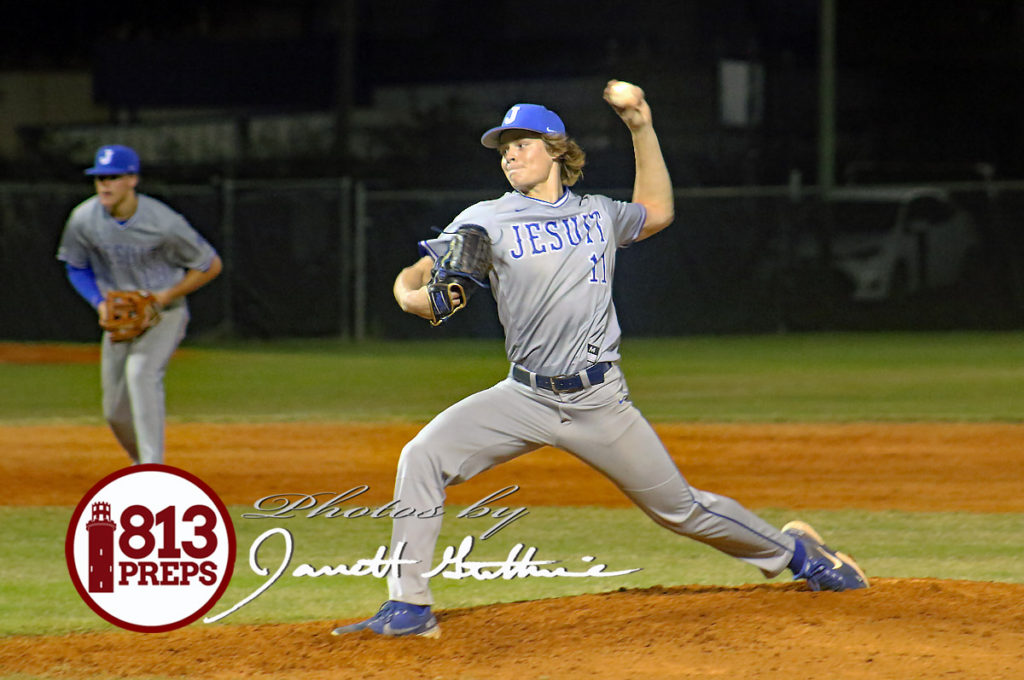 Sophomore lefty Wes Mendes worked quickly and turned in three no-hit innings as he picked up the win for the Tigers.

Jesuit (4-0, 1-0 in Class 5A-7) senior Bradke Lohry sent the games second pitch skipping down the third base line for a double, then with two outs Nick Rodriguez, who led the Tigers mercy-rule win over Tampa Catholic last Friday with five RBI, picked up right where he left off singling in the game’s first run and scoring the eventual decider on an error. Jake Kulikowski pushed the lead further with an RBI single in the first.

“Being the away team, I’m always looking to start the inning with whatever I can do,” said Lohry, who finished the game 3-for-4 with an RBI and two scores. “I have guys behind me that do their jobs, ready to drive me in, so I’m just up there worried about doing my part to set them up.”

Kulikowski, who also went 3-for-4 in the game adding another RBI single and a double to the stat sheet, said that he’s really liking the way his team is pushing through games to the very end and not becoming complacent with early leads.

“I think it’s really important to have a strong start, because I believe you can put teams away right out of the gate,” Kulikowski said. “But it’s also important not to let up, taking an early lead is great but you have to make sure you go at it 100% until the game is over.” 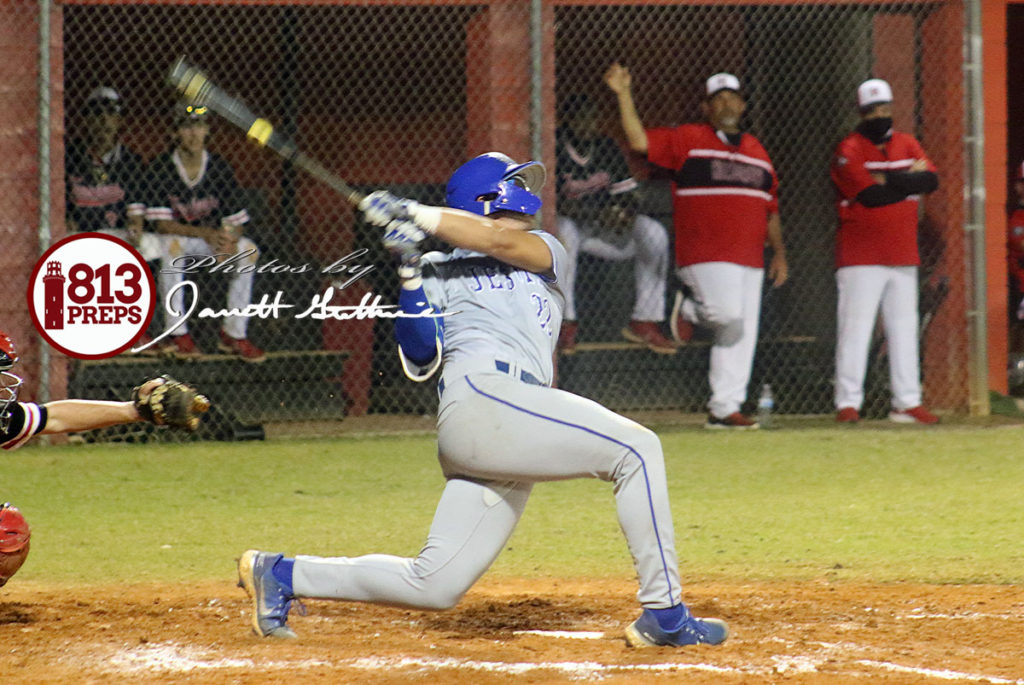 Senior Cole Russo sent a liner shot over the fence in right for his first home run of the season.

The Tigers added five more in the third as senior catcher Cole Russo laid down a nice bunt along the line toward third only to have the Terriers let it role foul, and Russo made that decision hurt three pitches later as he rounded the bases after sending a line drive over the fence in right for his first homer of the season. The inning steamrolled for Jesuit as five hits and two walks piled up the runs. 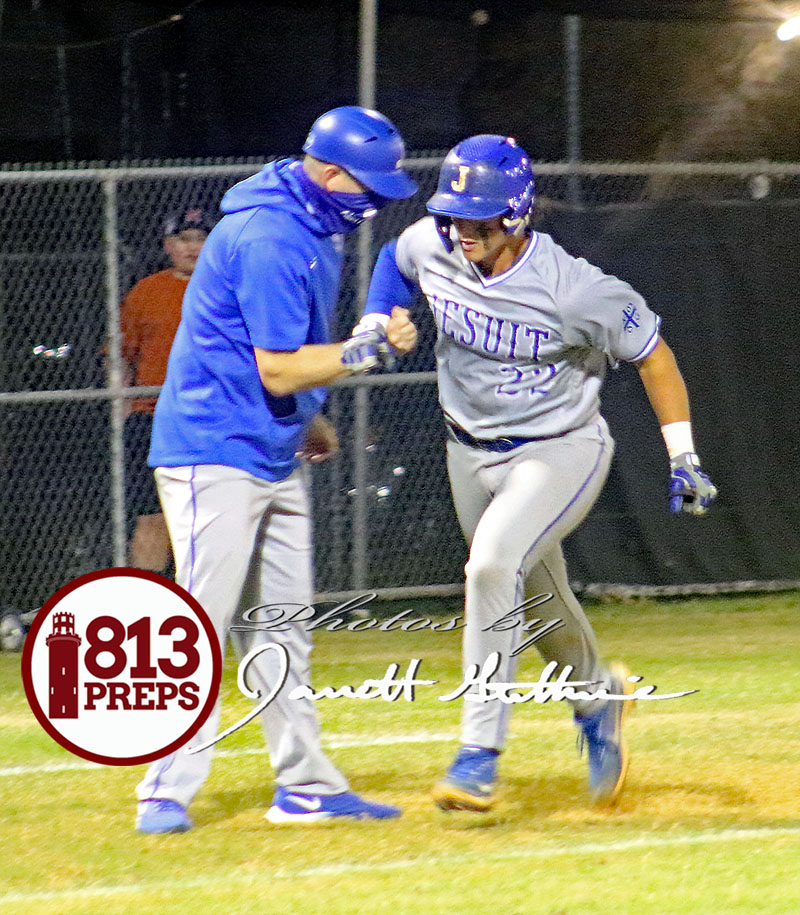 “It’s just keeping that foot on the gas,” Lohry said of the key for his team going forward. “(Keeping) the same type of energy for the whole game – not slowing down from the first pitch to the last.”

Russo also added a great throw behind the runner at first for the final out of the third inning, as the Tigers turned in some excellent defense in the win with a few nice plays from third baseman Wade Woodaz (1-4, RBI) and a great deep catch on a foul pop by first baseman Tyler Corish.

“(Wade) is awesome out there,” Mendes said, “but everyone behind me was out there picking me up. There are no weaknesses out there.”

Hillsborough (4-1, 2-1 in 5A-7) got a spectacular defensive play in left field by Kyle Bincarousky leaping for a fly ball off the bat of Russo in the fourth. But the Terriers bats were cold all night save for a fourth inning single from Tanner Jones and a sixth-inning single from Mallo (1-1, two walks), who has reached in his last 11 plate appearances.

Jesuit reliever Kris Sosnowski struck out three in as many innings, and Macklin Miller punched out a pair in his lone inning of work.