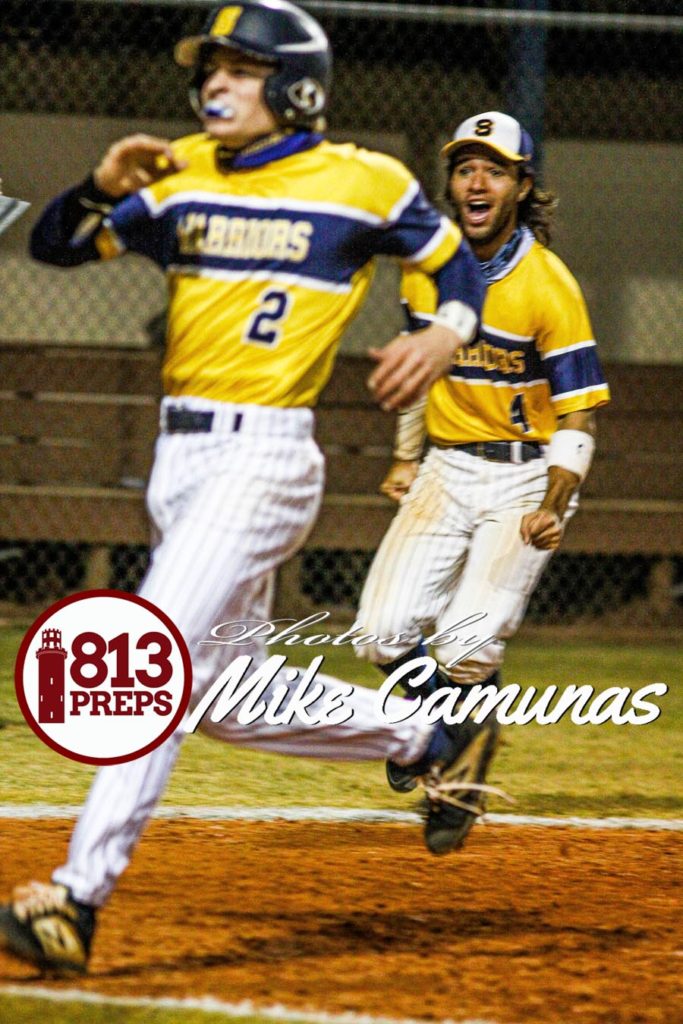 LUTZ — Steinbrenner, as in every game and with every team, got 21 outs — chances, really — but only needed 20 of them.

Making the most of a two-out situation, the Warriors rallied for a 4-3, walk-off win over the Cowboys on Thursday night thanks to a two-RBI double by senior James Strom.

“I was just looking for something to hit,” Strom said humbly in his postgame interview, “and hopefully drive someone in.”

@GSHShardball with the WALKOFF COME FROM BEHIND WIN over @GaitherBaseball thanks to a 2 RBI double by James Strom! FINAL: Warriors 4, Cowboys 3 @813Preps ?⚾️ pic.twitter.com/8BD2sFgB5m

Strom drove in Tayden Hall and then Chris Roberts for the game-winning run, capping a four-run bottom of the seventh inning as Steinbrenner (2-6) knocked around senior Ben Vazquez, who gave up three hits, a walk and a hit batter over 28 pitches in relief to close out the game.

“Basically,” Strom added, “we’ve struggled to hit all season so far, but we found a way to get through it tonight.”

All the right pieces aligned for the Warriors to rally for the win, as Strom, a left-handed batter, was pulled when he was struggling against Cowboys starter, C.J. Hanson, a southpaw. Once Gaither (2-2) replaced Hanson, who was dealing — three hits and two walks allowed to seven strikeouts on 75 pitches in five innings pitched — with Anthony Dimillo and then Vazquez, both righties, coach John Crumbley re-entered Strom back in the lineup.

Hanson kept Steinbrenner hitless until the fourth inning when Hall picked up a single, but the Cowboys jumped on Warriors starter, Jacob Statman, for three in the third as Frank Perez and Jacob Choe drove in runs and Hanson scored on an error.

But it was relief pitching that helped the Warriors stay in the game, as Aidan Dorrell would pitch three hitless innings and then Camden Boyer would strike out the side in the top of the seventh.

“We just told those guys to go out there and get your work in and throw donuts up there,” Crumbley said, adding, “and that’s what they did for us to keep us in it.”

The Warriors, who are weathering a rough start that include some tough losses, such as losing in walk-off fashion to Leto just two weeks ago, showed resilience and fortitude that, despite their record on paper, can turn the tables in a game.

“You get 21 outs,” Crumbley said. “We preach that all the time, we just have to do a better job of taking those opportunities with them. That’s all. That’s what we did tonight.”