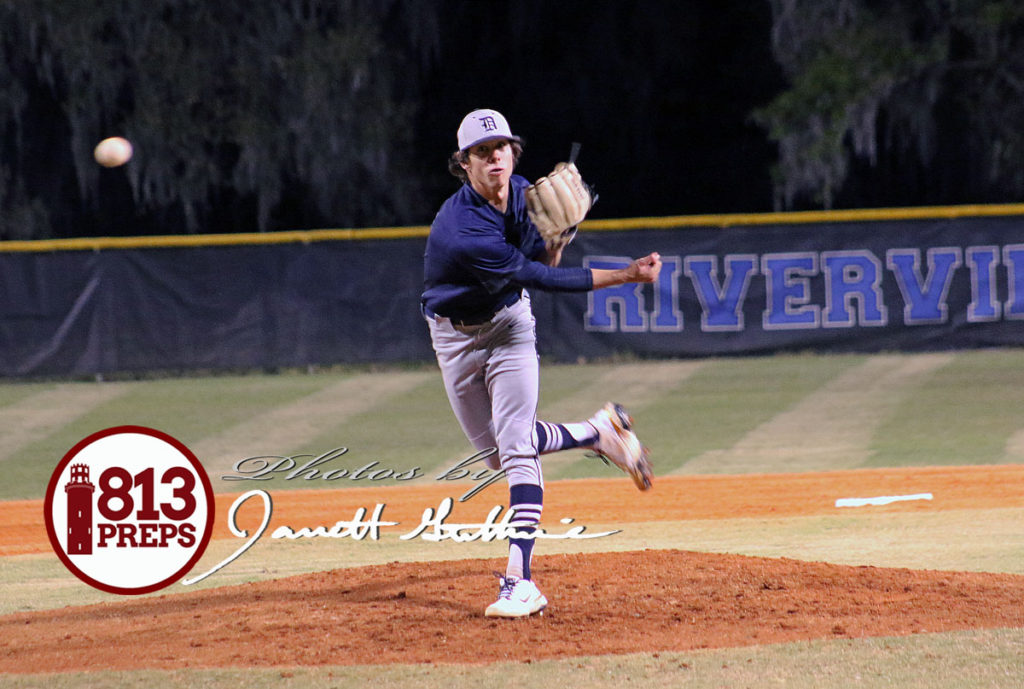 Durant senior Sean Hermann struck out 14, while allowing one unearned run against Riverview. Hermann improves to 2-0 on the season, and the Cougars are now 5-1.

RIVERVIEW – After being sidelined for 10 days due to Covid-19 contact-tracing, Durant ace Sean Hermann eased back into play on Tuesday, tossing nine pitches to earn the save against Middleton. Friday night, it was time to let the lanky righty stretch out a bit, and Hermann did not disappoint as the USF signee spun spectacularly, tossing a complete-game, two-hitter leading Durant to a 2-1, district victory at Riverview.

“I love high school baseball,” Hermann said. “I was quarantined for a week, so I was amped up for this one. We have 14 seniors, we have all known each other since we were in second grade, and we love coming out here to compete – there’s nothing like it.” 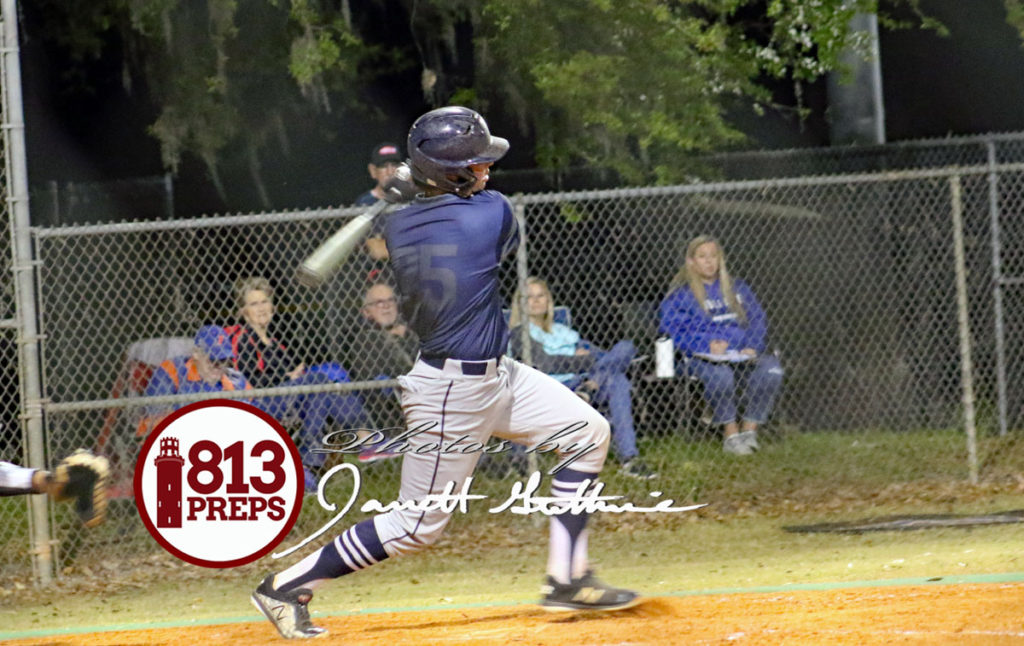 Durant’s Dylan LaPointe slaps one to the left side, and a late hop eats up the Sharks defender for a single and the game’s first run to score.

Durant (5-1, 2-0 in 7A-8) got a quick lead in the second as Dean Hotz (2-for-4) started off the second with a single up-the-middle and scored when Dylan LaPointe sent a skipper toward short that took a wicked hop. The Cougars added what would be the decider a frame later as three Sharks errors allowed Luke Scolaro to cross the plate. 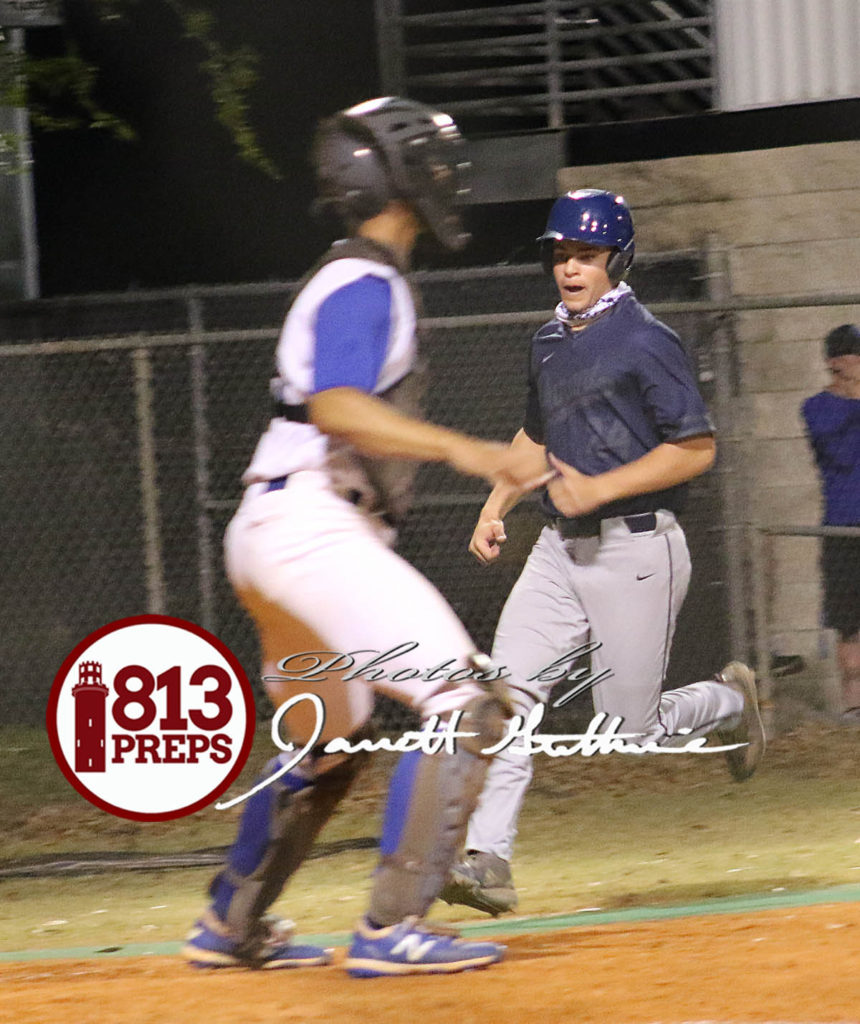 Durant’s Dean Hotz scores the games first run, after singling to lead off the second inning. Hotz would also have a fifth-inning single for the Cougars.

“We fought hard and so did Sean,” Hotz said. “This was a dogfight, but we had his back and he had ours.”

Riverview (3-3, 0-2 in 7A-8) got one back in the third on a miscue from the Cougars as Fisher Weeks reached on a two-base error, stole third and scored on a wild pitch.

From there though it was all pitching as Hermann didn’t allow a base runner across his final four innings, finishing with 14 strikeouts and no walks.

Sharks starting pitcher Nathan Hook allowed just two runs (one earned), but ran into a bit of trouble in the fourth loading the bases and was pulled for reliever Kipp Kochera. The Sharks senior quickly ended the threat striking out the first batter he saw, and finished the game in impressive fashion, striking out seven, while allowing just one hit and one walk.

“I knew I wanted to give my team the best chance we had to win,” Kochera said. “I think the only thing we have right now is a little bit of a lack of hitting, but once we get that going there isn’t a team we won’t compete with.” 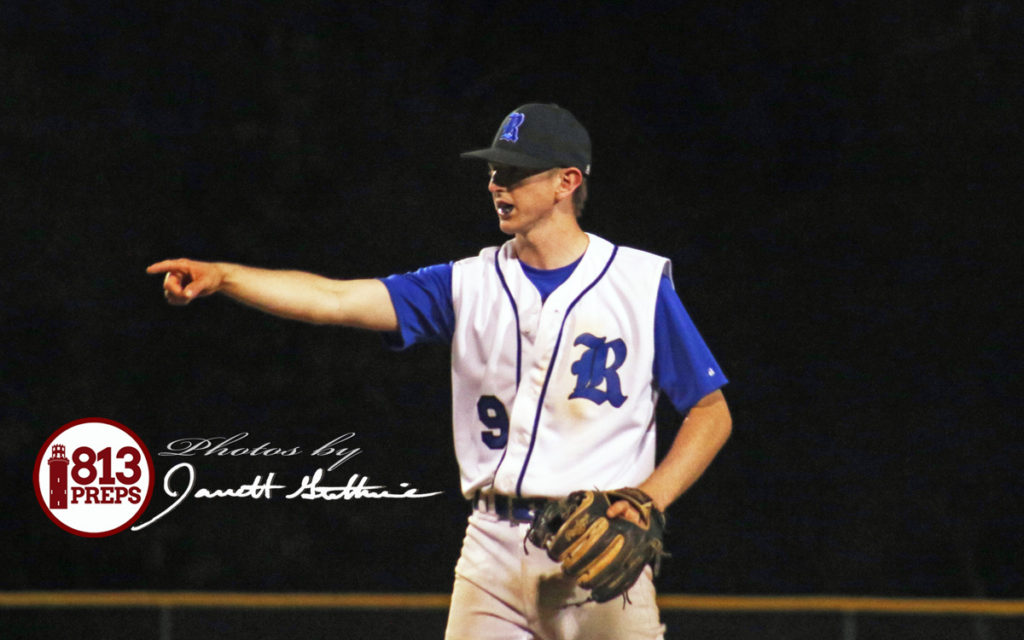 Hermann and Kochera were both complimentary of their opponent after the game, saying that each other’s success inning-by-inning served as motivation.

“All week I knew I was coming in to face him,” Kochera said. “There is not a pitcher I’m going to let throw by me, I’m going out there to do my job every time. But I was definitely fired up.”