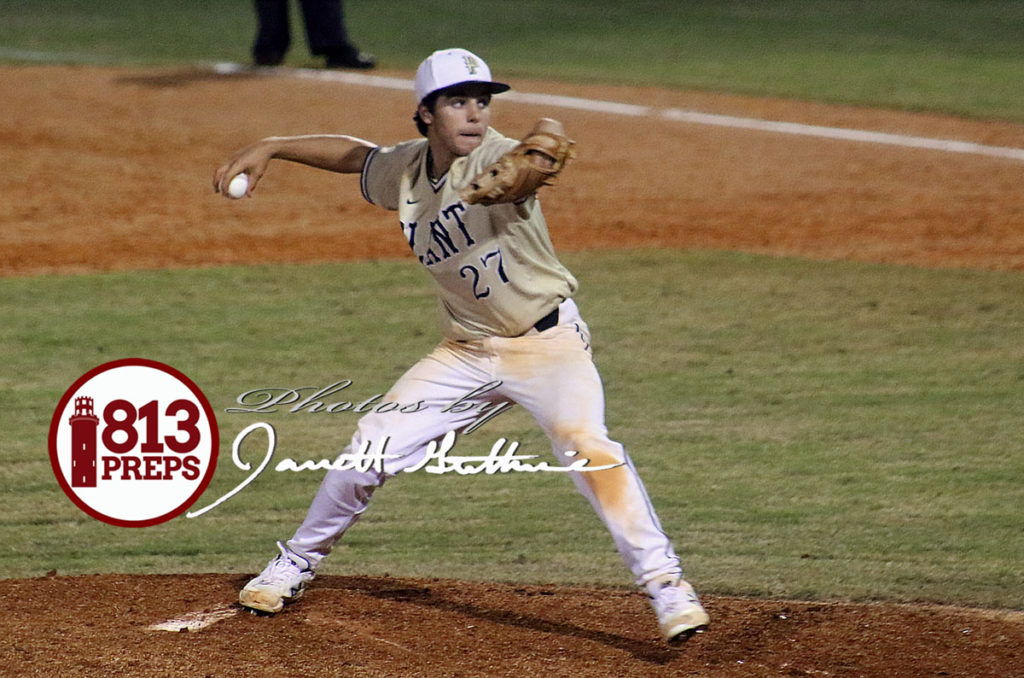 Plant junior Thomas Bolton moved to the mound from third with the bases loaded and his team up just a run, and finished the final seven outs to help his team to its first win of the season.

NEW TAMPA – With the bases loaded and the tying run 90 feet from home, Plant junior third baseman Thomas Bolton thought he was headed to the dugout for a defensive replacement as Panthers coach Dennis Braun approached his gathered infield on the mound. Instead the veteran skipper plopped the ball in Bolton’s glove – a show of confidence as Plant had seen its six-run lead on Wharton dwindle to a single score.

Three pitches later, Bolton left the Wildcats where they stood as a pop fly ended the threat and the righty worked the final seven outs to earn Plant a 6-5 win over Wharton.

“In all honesty, when he called me over I thought he was benching me,” Bolton said. “Until he gave me the ball. This is a crazy feeling.” 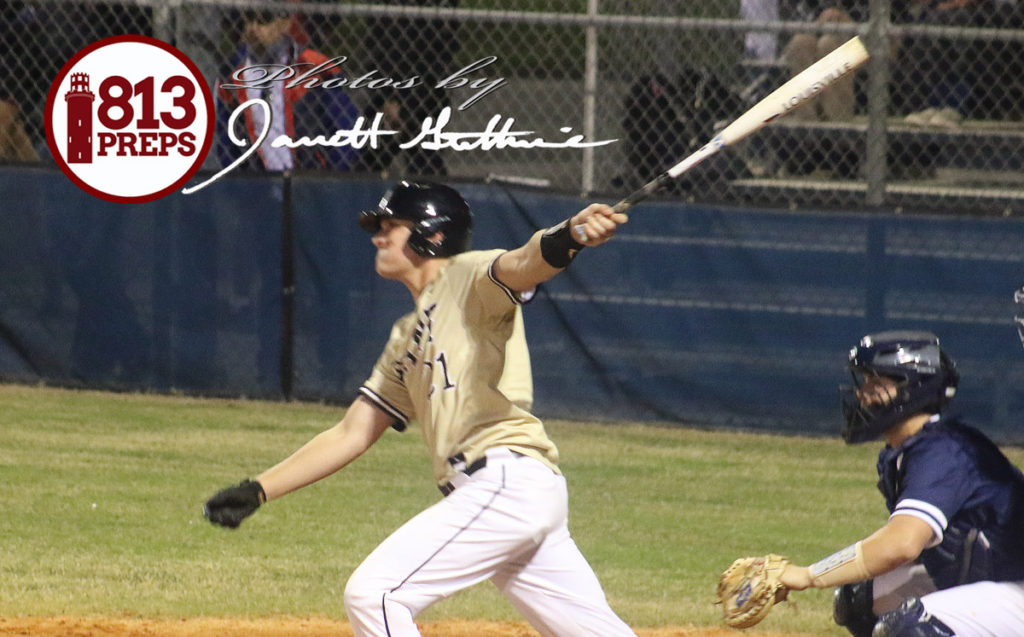 Panthers junior Tanner Gilbert sends a double off the batter’s eye in center in the second, and scored the game’s first run on a wild pitch.

Plant (1-5, 1-2 in Class 7A-District 7) took the lead early as a four-run second inning sparked by a Tanner Gilbert double, a Nick Lee sac fly and a two-run double from senior Jac Caglianone set an early tone.

The Panthers added two more the very next inning as Matt Cedola led off the frame with a single and back-to-back RBI singles from Bolton and Gilbert provided two crucial runs.

“I think this team came out here ready to hit today,” Gilbert said. “We were trying to get Cag as big a lead as we could, and we had to keep pounding them.

“(Wharton) is a really good team, so when they gave us chances we had to make sure we put runs up.” 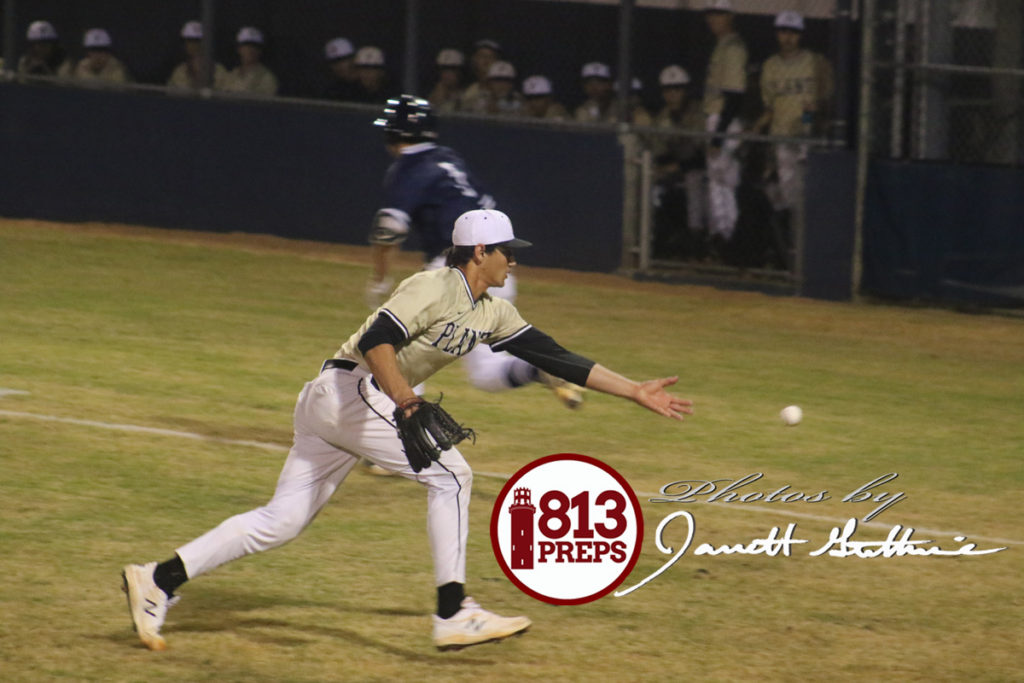 Plant senior Jac Caglianone came off the mound and made a nice flip to Gilbert at the plate to keep Wharton from scoring a run in the first.

Caglianone, a University of Florida signee, cruised through the Wildcats lineup through the first two turns, save for an RBI single from Henry Griffith in the fourth. The lefty struck out nine, but ran into some trouble in the fifth as six walks, including two in the inning, afforded Wharton some offensive help.

Plant’s ugly record to start the season only told part of the story, as the Panthers 0-4 start had all happened in games decided by two runs or less. Caglianone said after the game enough was enough for his team.

“We were tired of coming up short,” Caglianone said. “We were tired of our bats waking up late, or too late in games. Today we came out swinging, kept the energy up and we wanted this win just a little more than they did.”

Bolton took to the mound for his first pitching appearance of the season, and limited the Wildcats to a single hit, while striking out a pair to earn the save. Caglianone who earned his first win thanks in part to Bolton, praised his teammate’s grit entering in such a dicey spot.

“Coming in with the bases loaded is pretty daunting,” Caglianone said. “But I’ve always had faith in him, he’s always produced for us on the mound. I was really confident when Coach Braun gave him the ball.” 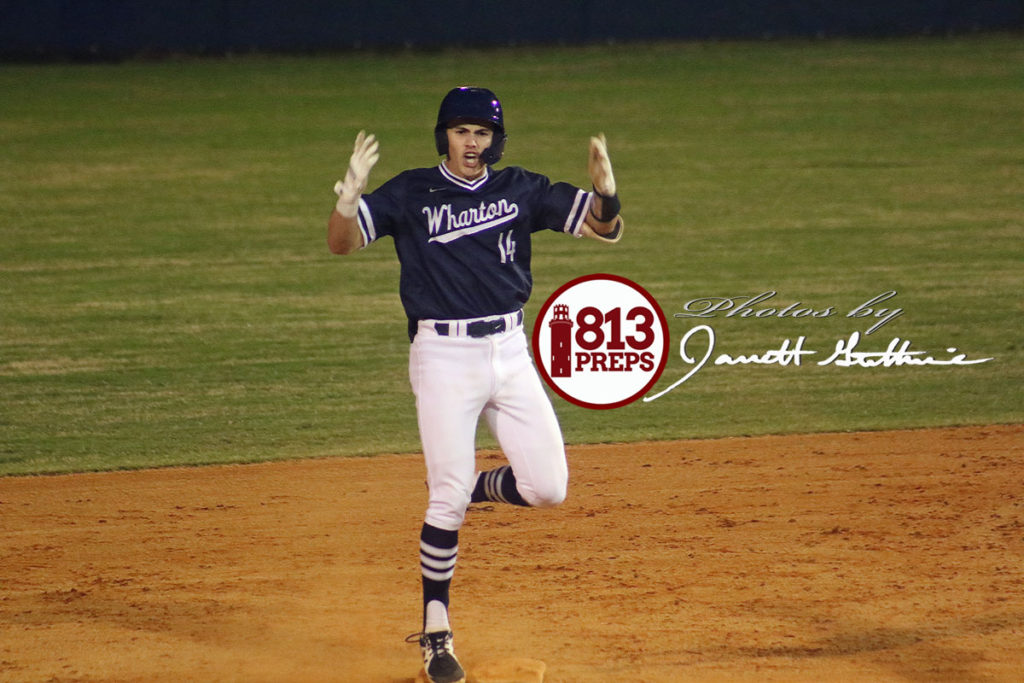 Wharton senior Zach Ehrhard celebrates his third-inning double. The Oklahoma State signee was 2-for-4, with a pair of stolen bases and a run scored for the Wildcats.

Wharton senior Zach Ehrhard was 2-for-4 with a double, two stolen bases and run scored in the loss, while Griffith added an RBI base-on-balls to his run-scoring single. Jackson Perkins struck out four in 3 2/3 innings of scoreless relief for the Wildcats.