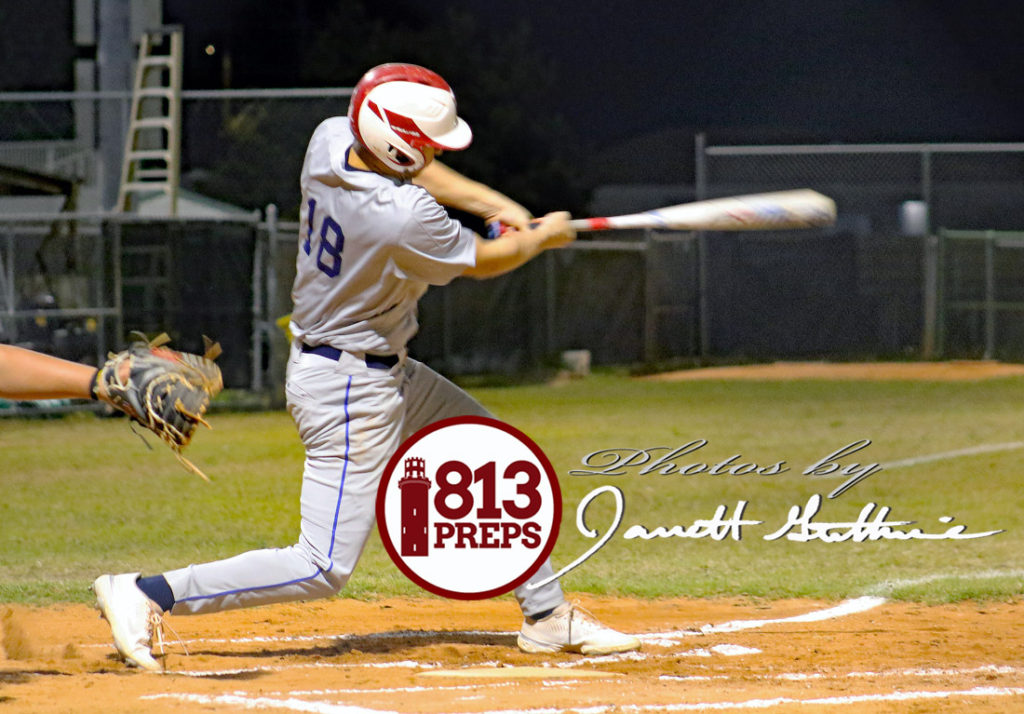 Freedom junior Raul Olivera was 2-for-3, including this single in the first, scoring three times and stealing four bases for the Patriots 9-3 win over Chamberlain.

TAMPA – Freedom’s offense came to play against district foe Chamberlain on Tuesday and was unrelenting to the very end as the Patriots put up 13 hits, drew eight walks and swiped 12 bags to come away with a 9-3 victory.

With the game tied at one apiece, Jackson Seidl singled to center scoring EJ Reyes in the third, before the Patriots hung four runs in the fourth to push the game out of reach.

The scoring started almost immediately for Freedom (3-5, 1-2 in Class 5A-6) as two-hole hitter Raul Olivera singled in his first AB, stole second and third, the latter drawing a bad throw and allowing him to score on the error.

Chamberlain (0-4, 0-2 in 5A-6) tied the game in the second as Michael Wormack similarly singled, stole a pair and scored on an RBI groundball from Tim Cook (1-3, double). 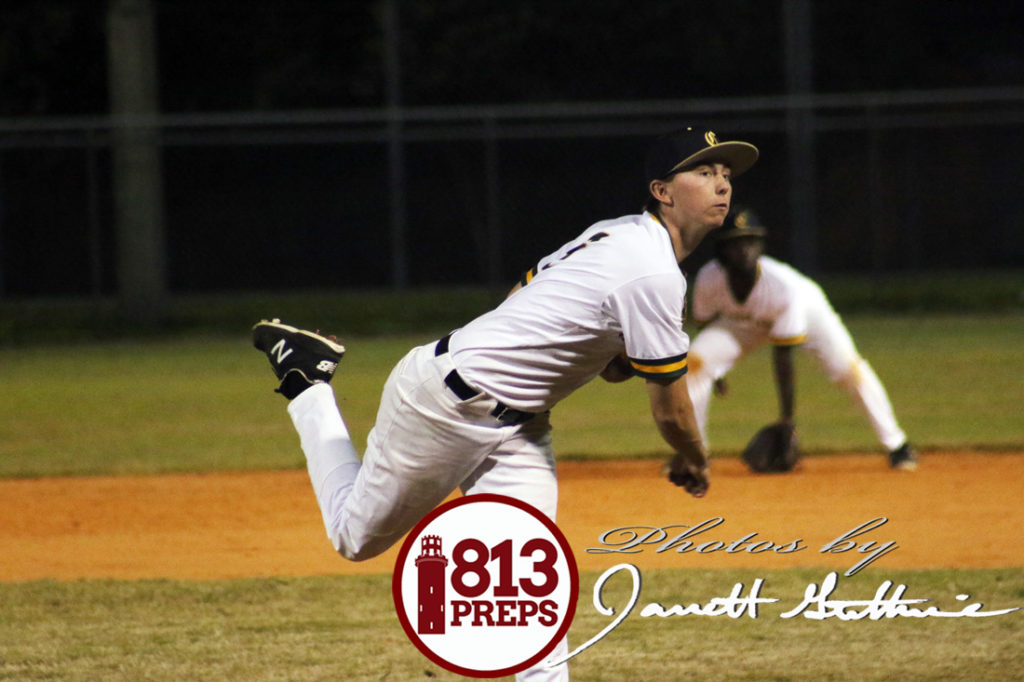 Chamberlain junior righty Kyle Wise struck out seven, but was tagged with the loss.

A starting pitching battle between a pair of “Wise” men took place, as Chamberlain junior Kyle Wise and Freedom junior Kerry Wise faced off from the mound. Sharing the same initials and last name, the two unrelated pitchers limited early damage with Kyle Wise allowing the first-inning run, and then two hits in the second, but struck out six in those two innings. Kerry Wise pitched a bit more to contact, but held the Chiefs to just the one run, on four hits in his five innings on the mound – good enough to pick up the win. 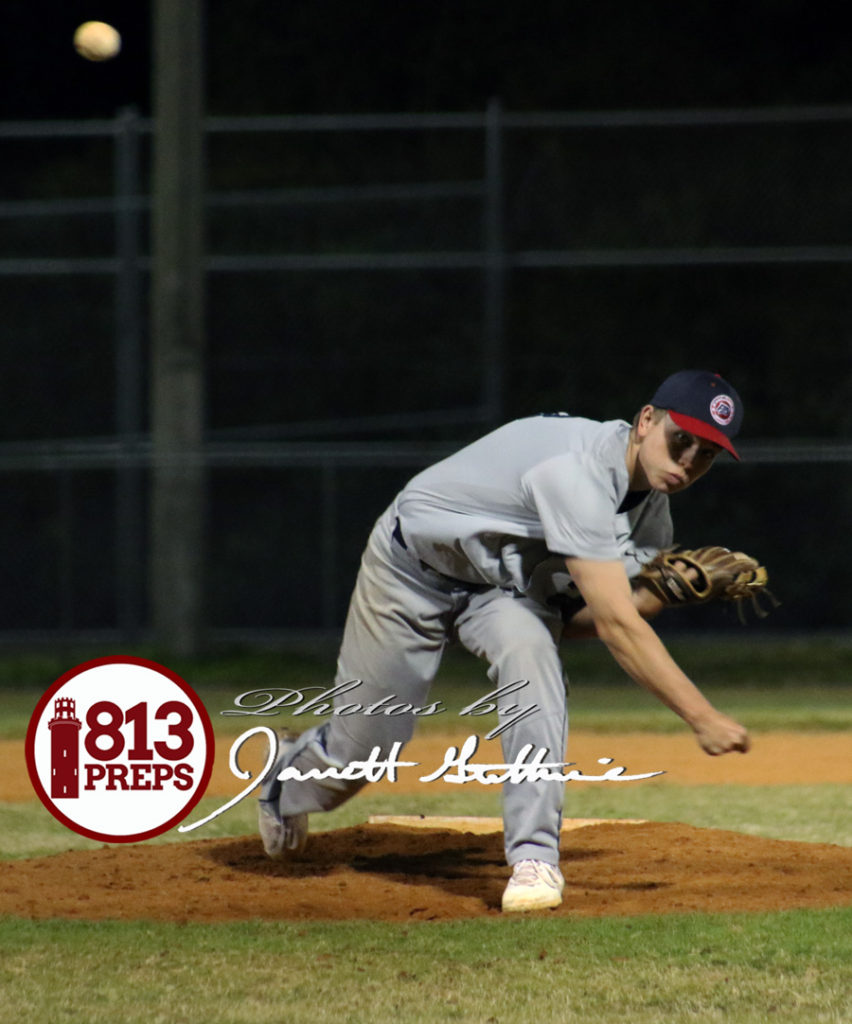 “I trust my defense and get them ground balls, pop flies, whatever it takes,” Kerry Wise said. “I know I don’t throw the hardest and I’m not going to blow it by them, but if they put it in play I have full faith in my defense.

“Once I got a few runs (of support) on the board, I had so much more confidence … you are thinking my offense has done it well, so now all I have to do is my job.”

Olivera was 2-for-3 for the Patriots, scoring three times and stealing four bases – including what would be the eventual deciding run – and said applying pressure once he reaches base is something he puts a lot of work into.

“The only thing in my head is to swing the bat hard and try to do whatever the team needs,” Olivera said. “If I get a sign, first move, I’m taking second base. I always try to do the best thing for my team.”

Lucas Richardson had an excellent night at the plate, doing a little bit of everything asked of the junior second baseman. Richardson’s sac bunt in the third put Reyes in scoring position, while he added an RBI sac fly in the fourth, before singling and stealing a bag in the sixth and capping the night, by going back-to-back with Reyes with RBI doubles.

“I was just thinking I needed to get on base for a change,” Richardson said with a smile. “It’s been a little on and off for me this season, so I just wanted to touch the clay a couple of times.”

Aidan Kraf had an RBI single, Marshall Chastain singled, scored a run and pitched an inning of relief, and Joey Way was 2-for-4 for the Patriots.

Chamberlain dug deep themselves, not letting the game steamroll too drastically on them and worked out of innings throughout, including stranding 13 Patriots’ runners at the end of innings. The Chiefs battled late adding an RBI single from Bryant Santana (again scoring Wormack) in the sixth, and a final run in the seventh on an Adrian Vega RBI single.

Chiefs sophomore Michael Wormack connects on a single in the second. Wormack would score twice and steal three for Chamberlain.