Pena strikes out 16 in no-hitter for Tampa Prep 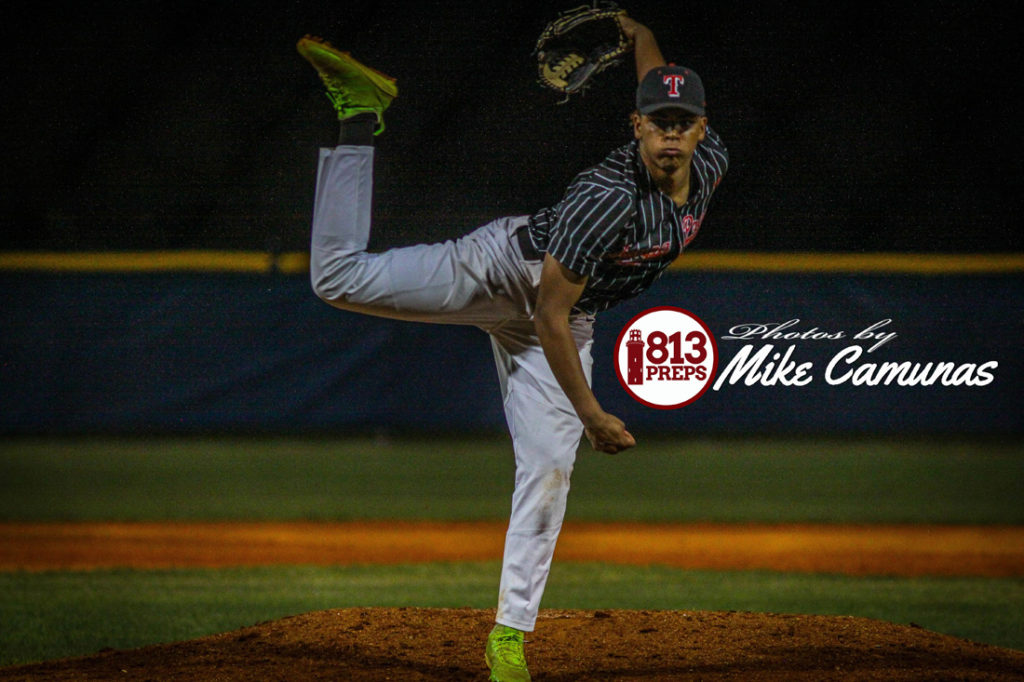 Tampa Prep senior Jose Pena struck out 16, walking just one in a no-hitter against Academy at the Lakes (813Preps file photo – Mike Camunas).

Tampa Prep senior Jose Pena said it was in his pregame warmups in the bullpen where he felt his fastball was really working well and he hoped that would translate into success on the mound against Academy of the Lakes.

The Florida International signee certainly took advantage of his comfort with the pitch as he peppered them in all night, tossing a no-hitter for the Terrapins as his team defeated the Wildcats 5-0.

“In the bullpen the fast ball was something I was trying to work on as well as the off-speed, whatever it took to get command of the zone,” Pena said. “And I felt it. I was hitting all my spots and I just knew I could rely on my fastball if I got into any trouble.

“When I got a few ball counts, I walked around the mound a little, took a breather and said, ‘let’s go,’ and the fastball was there all night.”

“His fastball dominated,” Terrapins coach AJ Hendrix said. “He got in a couple of 3-0 counts, but he battled the whole way, persevered and threw really, really well.”

Making his fourth start of the season, and having previously contended with perennial state powerhouse Lakeland Christian and our 813Preps No. 2-ranked Berkeley Prep, the 6-foot-3, 205-pound righty admitted that Wednesday’s game was the first time he felt truly in sync out on the mound.

“My team hit, got me some runs and I felt good,” he said. “I went out there took things into my own hands and it worked out.”

Pena improved to 1-1 on the year and lowered his ERA to 2.10. He said the Wildcats seemed unable to match his fastball with their bats, and so he didn’t overthink things and just went with what was working.

“They weren’t catching up to the fastball, but were swinging at nearly everyone I threw,” Pena said. “I threw as many as I could, not trying to waste too many pitches on hitters.”

Pena has drawn double-digit scouts to each of his starts, regularly clocked with a fastball in the mid-90s, but he said that he doesn’t let those critiquing eyes and radar guns distract him.

“When I’m on the mound, I don’t let pressure get to me,” Pena said. “I’m kind of used to all the scouts now, I’m focused. To me, scouts are just people in the stands watching me play like everyone else.”

According to Hendrix, he believes the no-hitter was the first for a Terrapins pitcher since 2016, when then-freshman Gilbert Marquis tossed a five-inning no-no against Whitefield Academy (Mableton, Ga.).

Tampa Prep 5
Academy at the Lakes 0