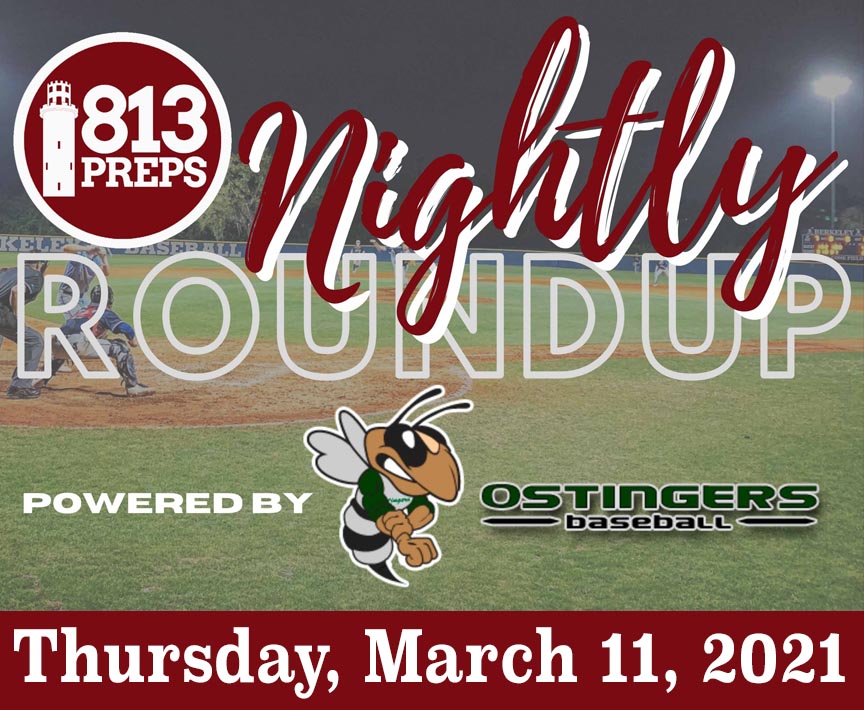 Congratulations to the @CCSLancers varsity baseball team on an 8-4 win over Canterbury this afternoon. The win raises the Lancers record to 4-5, with their next game tomorrow night vs Bell Creek at Skyway at 7pm. pic.twitter.com/CV0DBNJbIy

Zach McQuiston pitched five innings to earn the win for Cambridge Christian, striking out five, before Jett Rydell pitched the final two scoreless frames, notching the save. For the Lancers offense Julian Montes had a pair of hits, a stolen base and two RBI; Josh Morin stole a pair of bases and scored three runs; Philip Alessi went 2-for-3 with an RBI.

Ben Cheek pitched a complete-game, striking out six and allowing five hits. Clay Odiorne had a double and scored the deciding run. McKeel senior Sawyer Hawks struck out 11 for McKeel pitching seven innings and allowing one run on five hits.

Foundation Christian starting pitcher Shane Saunders struck out eight working four innings, while allowing one hit as the Panthers defeated SALT Tampa on Thursday. Senior Carson Kull was 3-for-3 with two doubles, three RBI and scored four, Austin Corn was also 3-for-3, driving in four, and Saunders helped out his own cause going 2-for-2 with a pair of RBI.

Tampa Prep’s Noah Sheffield walked off a win in the ninth as the Terrapins defeated SLAM, and also earned himself a win on the mound working the final three innings and striking out three. Older brother Jaden Sheffield was 1-for-3 with an RBI to tie the game in the seventh, and Mikey Marroquin struck out seven in 3 1/3 innings on the mound.

After River Ridge took an early lead on a Tyler Hawks single and an error, Berkeley Prep climbed back in the game with a Jonathan Bruno solo home run in the fourth and a five-run fifth sparked by and RBI single from Cade Kurland to tie it, and a two-run double by James Hankerson, before Kurland and an RBI single by Gunnett Carlson pushed this one out of reach. Evan Parmer picked up his third win, pitching three innings of relief.

Tampa Catholic’s Tyler Whitfield drove in a run in the fourth to give the Crusaders a lead and Rolando Jimenez drove in what would be the winner later in the inning. Andrew Pasetti earned the win in relief, Andrew Salzman and Brian Canasi each had two hits, while Vince Docobo doubled and scored a run. The Phoenix tried to come back late, with three hits in the seventh including a Ryan Martin RBI single but left a pair aboard as the game ended. Jimmy Curtis and Jaeden Johnson each had two singles and Nick Tomsich doubled twice in the loss.

Aidan Dorell limited Brandon to just three hits across five innings as Steinbrenner ended one early against Brandon. Evan Cuervo was 2-for-3 with a double and three RBI, Charlie DiCampli doubled and drove in a pair, and Kyle Soda scored three times and had an RBI on two hits.

Middleton’s Nathan Vong struck out three and allowed one unearned run as the Tigers offense put up double digit runs to end things early in a district game at Tampa Bay Tech. Ricardo Garcia hit a pair of triples and drove in a pair, while Remer McIntyre Jr. was 2-for-4, scoring twice and driving in a run and Marques Smith had a triple and scored twice. Evan Mobley had a double and scored the Titans lone run of the game, and had an immaculate inning on the mound in the fifth.

Three Wharton seniors combined to hold Hillsborough scoreless on Thursday, as Jackson Perkins earned a win in relief. Dylan McDonald doubled twice, drove in three and scored twice, while Zach Ehrhard was 2-for-3 with three RBI, two runs scored and two scoreless innings of relief. Riley Glover made the start pitching two no-hit innings for the Wildcats, and Breaden Hernandez and Billy Eich drove in two. For Hillsborough, Brady Burgess and Tanner Jones each doubled.

Robinson battled back and scored six in the fifth and the Knights held off a Plant comeback to claim one-run lead against its South Tampa rival. The Knights exploded in the sixth with two outs as Blowers doubled before Jeremiah Henderson and Joe Whittaker singled in runs, and Lamont Akins doubled in a pair in the inning. Cameron Duss was 2-for-3 for the Knights with an RBI, Owen Brown earned the win and David Sandefer notched the save. Jac Caglianone had a home run for the Panthers, as Plant scored a pair in the top of the seventh but couldn’t plate the tying run. Matthew Ward was 2-for-4, scoring three times and Bryce Pelleriti was 1-for-2 with two RBI for the Panthers.

Riverview senior Caden Santucci went 2-for-3, with two doubles, three RBI, a stolen base and a run scored, as the Sharks employed a bullpen rotation on the mound with Ronnie Brandon earning the win with three strikeouts in his inning of work. Fisher Weeks had a double, run, scored, sac fly and two RBI, Gerard Lopez had a double and run, and Dominic Lopez started at catcher and threw out a pair of base runners.

An RBI single by Tate Gran and a two-run hit from Ethan Sillart keyed the deciding inning as East Bay held off Gaither for a win on the road Thursday night; Hans Walker doubled scored one and drove in one and Jeremy Galen also doubled in a run for the Indians. Gaither battled to the end with Bryce Busa doubling in a pair in the sixth, but the Cowboys couldn’t finish the comeback; Austin Grause had a double and two RBI, while Jacob Choe was 2-for-3 with a run scored.