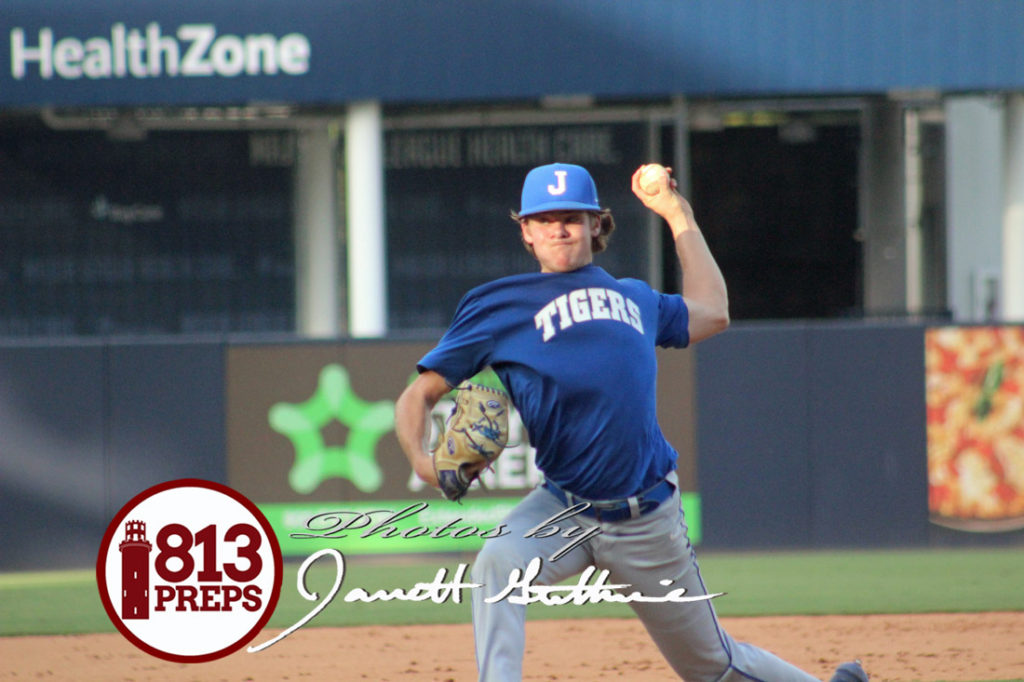 Jesuit senior lefty Dominic Castellano pitched a no-hitter, leading the Tigers to a 3-0 win over visiting Sarasota with eight strikeouts and just two walks. The complete-game effort marks the fourth no-no of the week for a player from Hillsborough County and Castellano did it in impressive fashion, needing just 86 pitches to send the Sailors on their way.

“Dom’s fastball was really good, and the first time through their lineup, that’s primarily what we threw with him commanding the inner-half of plate,” Tigers coach Miguel Menendez said. “The second time through we mixed in the changeup and slider, but he threw strikes and gave them fits all night long.”

In that first time through the Sarasota (4-3) lineup, Castellano picked up six of his eight K’s and Jesuit (7-1) got three on the board to seal the win.

“I had two strikeouts to start the game in the first and I really felt great after that, attacking the plate that first time through (the lineup),” he said. “Later in the game, I worked in the slider and really tunneled the slider off of that for swings and misses.”

His only inning under pressure was the fifth, where he issued a walk and hit a batter with one out. From there he got a pair of fly-ball outs to end the threat and his only other blemish was a seventh inning, two-out walk before getting a roll-over ground out to second base to end the game.

“That inning I was just rushing out on the mound a little bit,” he said. “I may have had the no-no in the back of my mind, so I had to go okay, and just attack the zone. I feel like after the walk and hitting the guy, I think I did a pretty good job.”

With a wealth of talent on the mound, Menendez said it isn’t overwhelming stuff that separates the University of Central Florida signee as the Tigers No. 1, but instead his maturity and confidence on the bump.

“We probably have guys with better stuff,” Menendez said. “He doesn’t throw the hardest, or have the best breaking ball, but he’s mature, has been around varsity the longest … he’s that leader, that bulldog guy, who says ‘I want the ball in the big game and no one is going to hit me.’

“I think there is something to having that mindset that makes him really special.”

Castellano credits the guys he got to work under the previous two seasons for showing him the right way to go about his work on the mound.

“I think the example of Camden Minacci, Josh Mallitz, Turner Thompson, all those guys we had the last few years really helped me become mentally and physically better,” Castellano said. “Our current staff is extremely competitive, it’s tough to get in and get innings, so I know I have to work every time I’m on the mound. I think having (last year’s seniors) and the guys we have now makes everyone push to be better.”

Offensively, Jake Kulikowski was 2-for-3 with an RBI single in the first, and plated two more runs in the third to support his pitcher. Senior BJ Graham had a single and scored twice for Jesuit.