Fritsch helps his own cause, deals for six in Bell Creek win 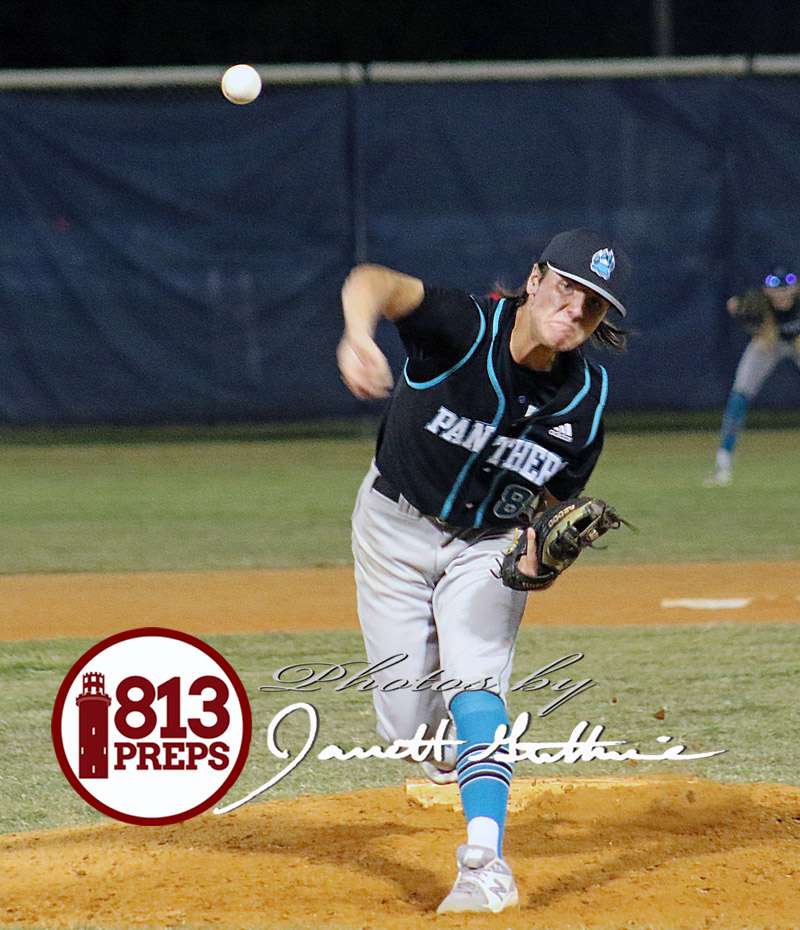 Bell Creek sophomore Tyler Fritsch tossed six, shutout innings and got his team on the board with a two-run single as the Panthers topped Cambridge Christian on the road on Friday.

TAMPA – Bell Creek’s Tyler Fritsch acknowledged his pitching often overshadows his abilities with the bat. So, when the Panthers sophomore slapped a single into center in the third, driving in a pair of runs to support his own cause on the mound against Cambridge Christian on Friday, he said he couldn’t help but show his emotions returning to the first base bag with five big claps of his hands. 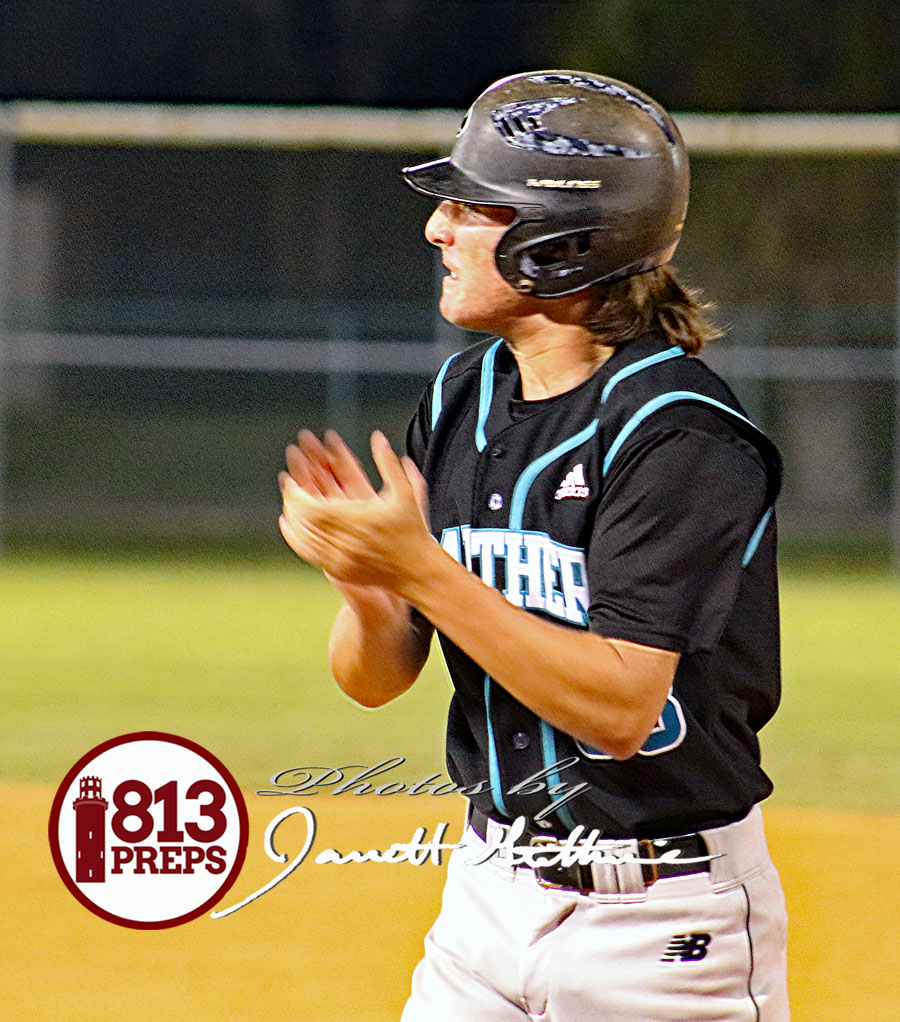 Bell Creek’s Tyler Fritsch is fired up after getting his team on the board with a two-run single in the third against Cambridge Christian.

“That was exciting,” Fritsch said. “I usually am pretty focused on my pitching, but when you get a hit I get hyped.”

From there it was back to work on the mound for Fritsch, who held Cambridge Christian to just four hits over six innings of work as Bell Creek came away from Skyway Park with an 8-0 victory.
Fritsch worked in a pretty successful curveball along with his fastball and cruised through the Lancers lineup the first time with little trouble.

Cambridge Christian (4-6) got a single from senior Josh Morin in the first, but a groundball fielder’s choice erased that runner in short order and Panthers backstop Isaac Martinez ended the first catching a runner attempting to steal by two steps.

“After the first inning, I feel like I had set the tone from there,” Fritsch said. “I went out on the mound, the team behind me – there heads were all up the whole way, and that made it easy to keep my head up as well.”

Xavier Talbot helped pad the Panthers lead in the third, following Fritsch single with an RBI hit of his own, and senior Dante Portillo stayed active on the basepaths throughout, going 1-3, with two walks and scoring four times.

“Being the only senior on this team, I take a lot of pride in being that leader, getting on base and starting it off right,” Portillo said. “Especially tonight, being away I try and find a way on and make it work.” 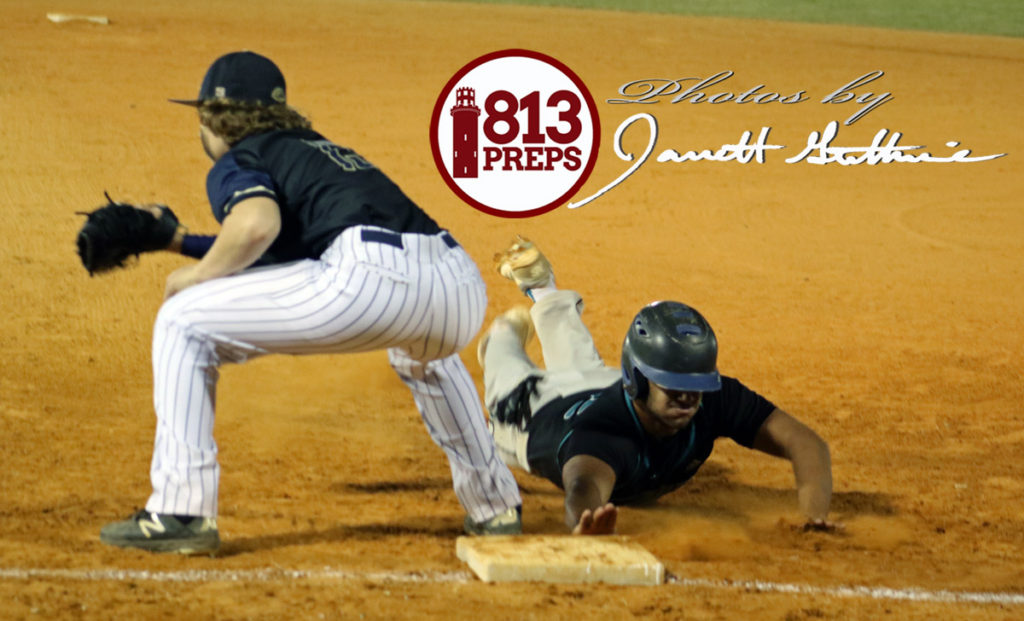 Bell Creek senior Dante Portillo dives back into first in the third inning. Portillo would move around to score the game winner later that inning, the first of his four runs in the win.

Portillo leads the team with a .560 batting average for Bell Creek (5-3), and upped his team runs lead to 18, and his ability to get on base and set the tone at the top of the lineup was not lost on his starting pitcher.

“It’s incredible to have a guy like Dante at the top of this lineup,” Fritsch said. “He’s a great leader for us, a great friend to everyone on this team. You always have a chance with a guy like that on the field behind you.”

Caleb Rodriguez, who scored on Fritsch single in the third, added a single and run scored in the sixth, and doubled in a run in the seventh to push the lead out some more. He followed up the double by tossing the final inning for the Panthers, ending the game with a strikeout.

“There is always a little bit of pressure when you come in as a reliever,” Rodriguez said. “Even when you have such a big cushion, but you just have to go out there, do your job. Do it for the guy’s behind you, you know, it’s just let’s get it done.”

Fritsch allowed three runners to get in scoring position but didn’t let one get across, finishing his six innings with five strikeouts and just one walk. Two of those three runners reached third, but not before he had a pair of outs on the scoreboard in either spot.

“The game is still mine, I have the ball,” Fritsch said. “I think I did a pretty good job, not allowing them to get there until two outs, so it was just me and the batter and I didn’t really think about (the runners).”

For the Lancers offense Frankie Taylor, Phillip Alessi and Julian Montes, had singles along with Morin’s first inning knock.