Both offenses showed up on Saturday but, in the end, the hitting frenzy favored the underdogs as 14-seed Alonso used solid hitting and team defense to upset three-seed Bloomingdale, 9-7 in extra innings to win the first round of Gold Division of Saladino as Hector Montilla doubled in a pair in the eighth.

Clutch hit from Alonso’s Hector Montilla to drive in two runs in the eighth inning and take the lead. Thrown out at third but the runs still count. 9-7 Alonso in front pic.twitter.com/aZSaGQgQla

The offense started immediately in the bottom of the first inning with Drake Harman getting a lead-off single before cleanup hitter Wyatt Strickland batted him home with a line drive to left field to take a lead.

But Alonso (7-3) matched the early run with a couple quick singles in the top of the second and a Sammy Seplowe double that drove in the Ravens’ first run to tie the game.

With two runners still in scoring position, Alonso’s ninth hitter Christian Del Campo smacked the fourth base hit of the inning into centerfield to give his team a two-run lead. Another single and a couple of walks from Bloomingdale pitcher Chase Chappel, one with the bases loaded, capped off a four-run answer from Alonso and a heading into the third.

“We were trying to come here, be aggressive, get that first strong inning and just keep the game rolling,” Del Campo said after the game. 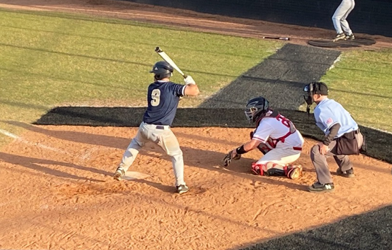 But in the bottom of the second inning, Bloomingdale (8-2) stormed right back. Two singles to start the inning were driven in by a double by Harman to draw to within a run. But the momentum was short-lived thanks to a towering two-run home run from Del Campo.

“I got a fastball high. I thought it was a mistake pitch,” the senior catcher said. “I just had to do damage with that pitch.”

Del Campo’s homer was the first of the year for Alonso by someone not named Zen Hiatt (who leads the team and county with four).

Bulls head coach Kris Wilken gathered his players for a meeting after the inning to try and spark his floundering team down three runs. It did not appear to have the desired effect, the team proceeded to hit into three quick outs for the game’s first one-two-three inning before Alonso added another off a single by Keenan Rutledge for his team’s seventh run.

But in the fourth inning, the switch was flipped.

Bloomingdale’s offense woke up with a fury, using a two-out rally that included three-straight doubles, a single from Colby Shelton and a throwing error to storm back and tie the game 7-7.

With the contest tied heading into the fifth, the game began to stagnate as both pitching staffs finally settled in. Bloomingdale ran through four pitchers in as many innings before getting a solid performance from sophomore Trey Wilson, who went 3 2/3 innings in relief and struck out six batters.

The Ravens, despite the high-scoring game, saw solid pitching for most of the game. Haile Daley’s 3 2/3 innings to start were good enough — largely thanks to a near-perfect performance from the defense behind him — before Seplowe came in relief to close out the final 4 1/3 innings, striking out nine batters and allowing just one run in the winning effort.

And we’ll have extras. Clutch relief pitching from Sammy Seplowe has kept the game tied and given Alonso a chance to pull it out in the 8th

Now the Ravens will now advance to face Wharton on Monday in Round 2 of the tournament while Bloomingdale will move to the losers’ bracket to meet Leto for the second time in less than a week. For Alonso, the win over the Bulls was a surprising one, but one the team hopes is the start of an underdog run.

“We’re definitely looking to take this momentum into the next round without a doubt,” Del Campo said.