Lennard has a blast in return from layoff 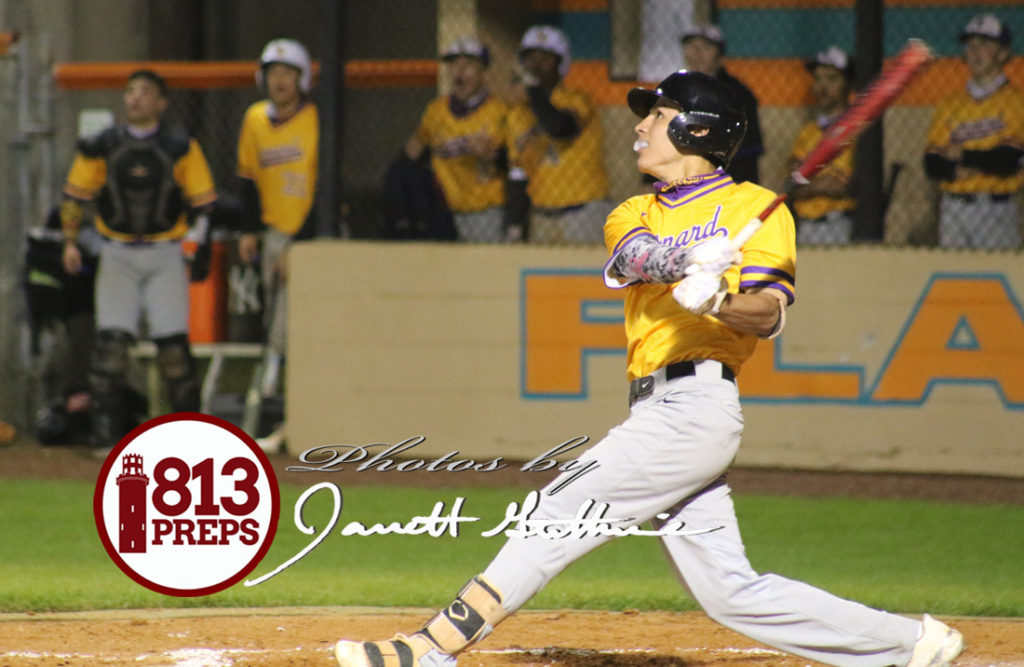 Lennard senior Fransisco Alaniz had a two-run home run in the first to give the Longhorns enough for a victory over Plant (813Preps file photo).

PLANT CITY – Lennard emerged from a lengthy quarantine to upset fifth-seeded Plant in the first round of the 16-team Saladino Gold Division Tournament on Saturday at Durant High, one of six sites for the event.

The No. 12 seed produced all the offense necessary for a 2-1 victory in its first turn at bat. Plant right-hander Sebastian Martinez hit leadoff batter Sebastian Munoz, who was forced out at second on a sacrifice bunt attempt. Fransisco Alaniz stepped in next and redirected a 1-1 curveball over the fence in right center.

“Going into the game, I was kind of relaxed,” Martinez said, “and having that home run hit off me really opened my eyes and just kind of fired me to fight through. It was pretty shocking.”

Alanis was a bit surprised himself.

“It was a good pitch. It came in high and then it broke low,” he said. “I adjusted and hit the ball through. The ball kept carrying and I was like, oh, this ball might actually have a chance.”

Martinez did not allow another hit before giving way to fellow right-hander Andres Camargo with two down in the sixth, finishing a 74-pitch outing with six strikeouts and a walk.

Plant (1-8) scored its run in the fifth and was threatening for more. Thomas Bolton, Gabe Suarez and Conley Strayer singled in succession to open the inning, then Strayer stole second to put the potential go-ahead run in scoring position with none out.

Sophomore right-hander Carter Payne then escaped the jam with a popout behind home plate and two of his seven strikeouts in the complete-game, five-hit victory.

“I was a little frazzled at first,” Payne said. “Plant’s a really good team. They hit the ball really well, but I found a way to stay within myself, trust my defense and let them do the work.”

Lennard (2-3) had not played since bowing to Durant on the same diamond nearly three weeks ago. The Longhorns will have the opportunity to avenge that loss Monday in a quarterfinal rematch with the Cougars, also a 2-1 winner Saturday against Steinbrenner.

“The boys were excited,” first-year Longhorns coach Victor Martinez said. “I think it showed right off the bat they were ready to go.”