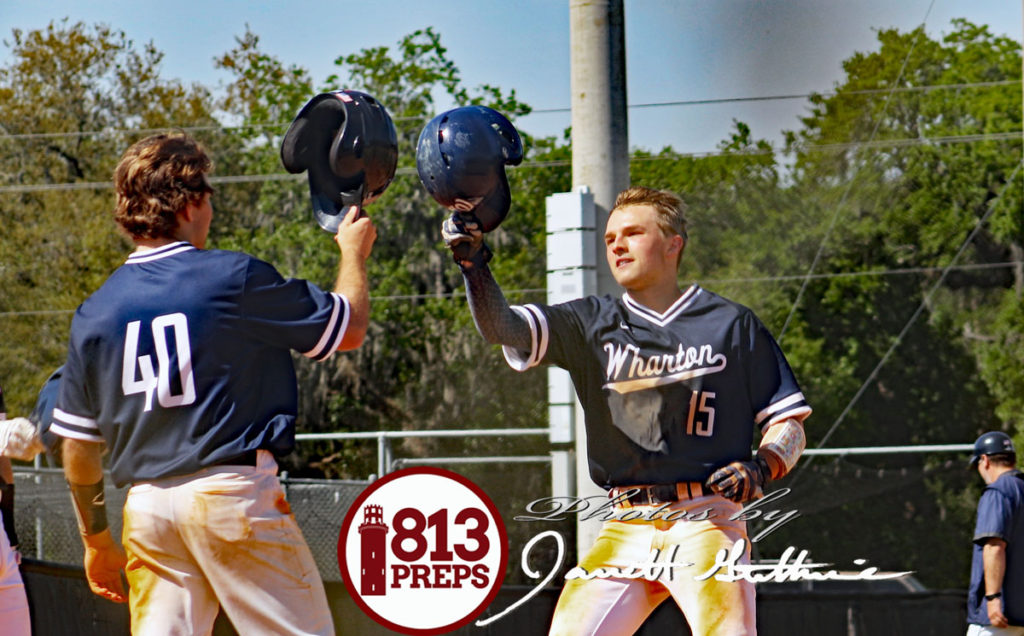 Wharton’s Dylan McDonald is greeted at the plate by senior Grant Parker after his two-run homer. McDonald was 4-for-5 in the game, singling three times, stealing three and scoring three times.

DOVER – Wharton’s Dylan McDonald took his time and picked out one he liked in his first at-bat of the Wildcats opener of the 2021 Saladino Baseball Tournament at Strawberry Crest on Saturday. Watching a pair of strikes go by and seeing the count run full, McDonald timed a breaking ball and slapped a groundball skipping into left field.

From there, the Saint Leo signee was in hack mode, singling two more times before solidifying Wharton’s win over Leto with a two-run blast to give his team the 6-0 lead that would finish it out.

“I feel like if I start off a game getting on board, no matter what I’m going to score because the guys behind me do their jobs no matter what,” McDonald said. “I was feeling myself today, on the home run I was able to put the bat to the ball.

“I had a feeling (off the bat), then I saw the outfielder turn and look up, I thought it might be off the wall, but it had enough of a chance of getting out.” 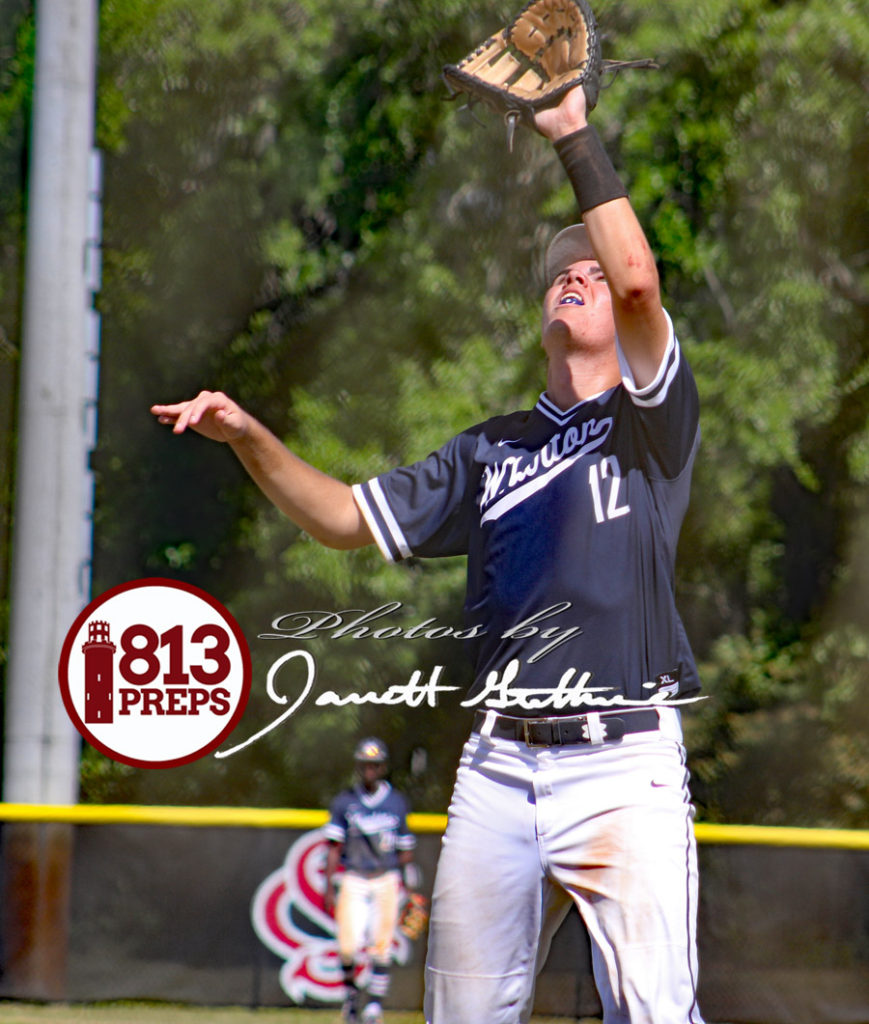 Wharton first baseman Billy Eich settles under a foul pop for a catch for one of a number of nice defensive plays for the Wildcats.

In the first inning it appeared McDonald, after stealing second and going into third on a ball in the dirt, would end the inning 90 feet away as the home plate ump’s call of batters interference seemingly ended the frame. However, Wildcats coach Scott Hoffman made a persuasive argument as after a second umpire huddle the call was overturned and junior Billy Eich made the new life hurt, driving in McDonald with a liner to left.

From there Wharton (8-2) held the one-run lead for through the first three innings, as junior Evan Chrest worked efficiently on the mound, scattering six Falcons hits.

Junior Elijah Dukes’ RBI sac fly in the fourth finally gave the Wildcats some cushion and another RBI single from Eich and an error on his hit added two more to push things out of the Falcons reach.

“I was just thinking base hits, do my job and get runs in,” Eich said. “That’s all I’m ever trying to do.” 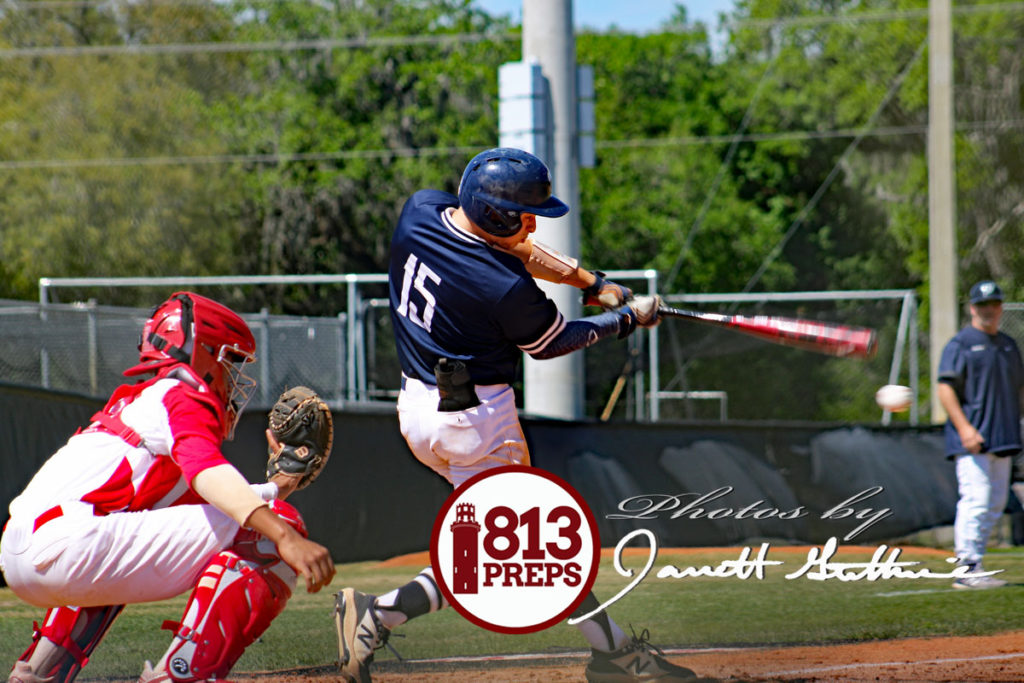 Dylan McDonald connects on his full-count leadoff single in the first.

Though McDonald’s big day at the plate drew the attention, Wharton’s defense was outstanding Eich fielded first base well, senior Zach Ehrhard moved from shortstop to the mound in relief of Chrest only to field two plays back to the mound in back-to-back innings, and senior Grant Parker made the defensive play of the game diving for a liner, and then diving to the second base bag to turn a double-play. 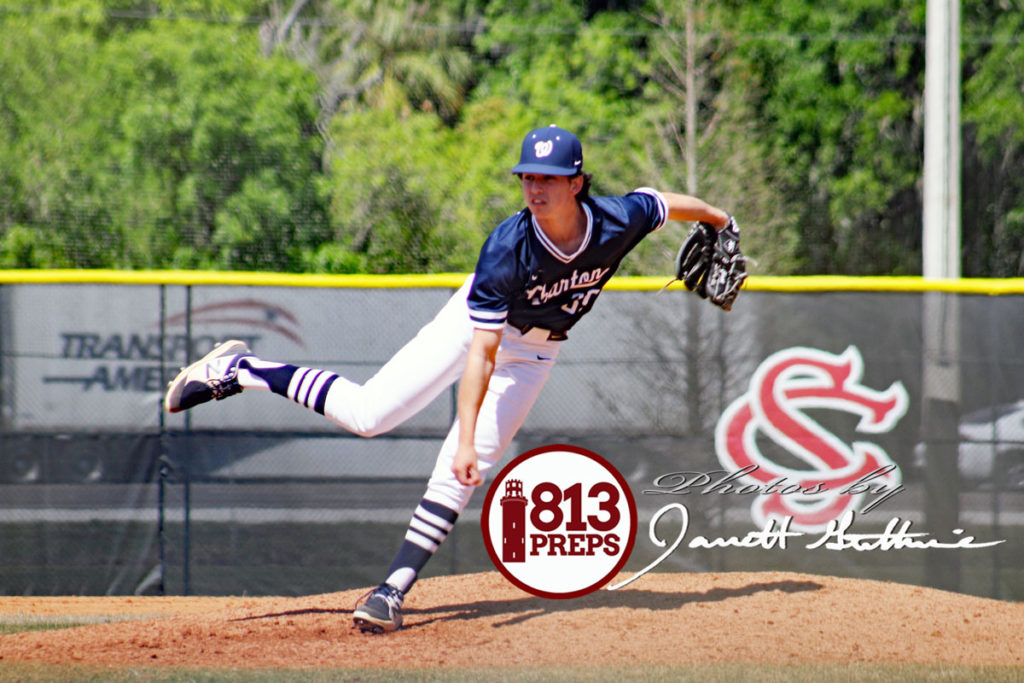 Evan Chrest worked 4 2/3 innings to earn a win on the mound for the Wildcats.

“We knew going in, if Chrest put the ball where we needed him too, I told them, ‘boys you are going to get a lot of opportunities to make play,’” said Hoffman. “Grant has been our spot guy, and it’s working well right now. That was a huge play and he made another great one the other night, he’s doing a great job.”

For Leto (6-4), Shabazz Brumley was 4-for-4, while Brayan Cruz was 2-for-3 with a roped double to the gap, and Alberto Attias had a double as well. 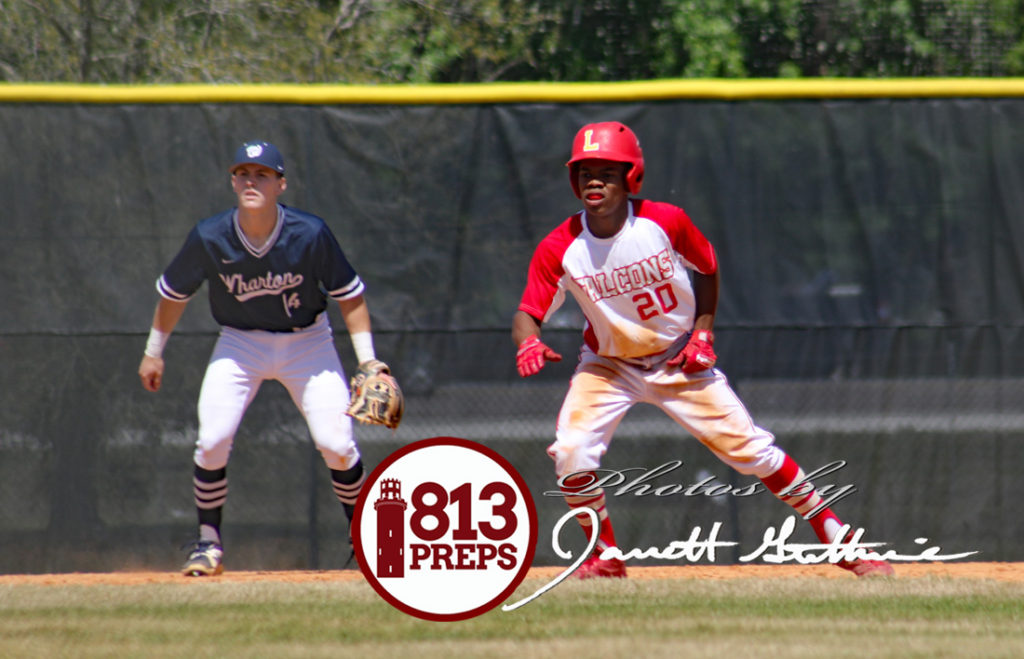 Leto’s Shabazz Brumley, who was 4-for-4, with three stolen bases for the Falcons, leads of second in front of shortstop Zach Ehrhard.

Wharton will take on Alonso, extra-inning winners at Bloomingdale, on Monday at 8 p.m. in a game played at Jesuit, while Leto will play the Bulls in Valrico at 7 p.m.