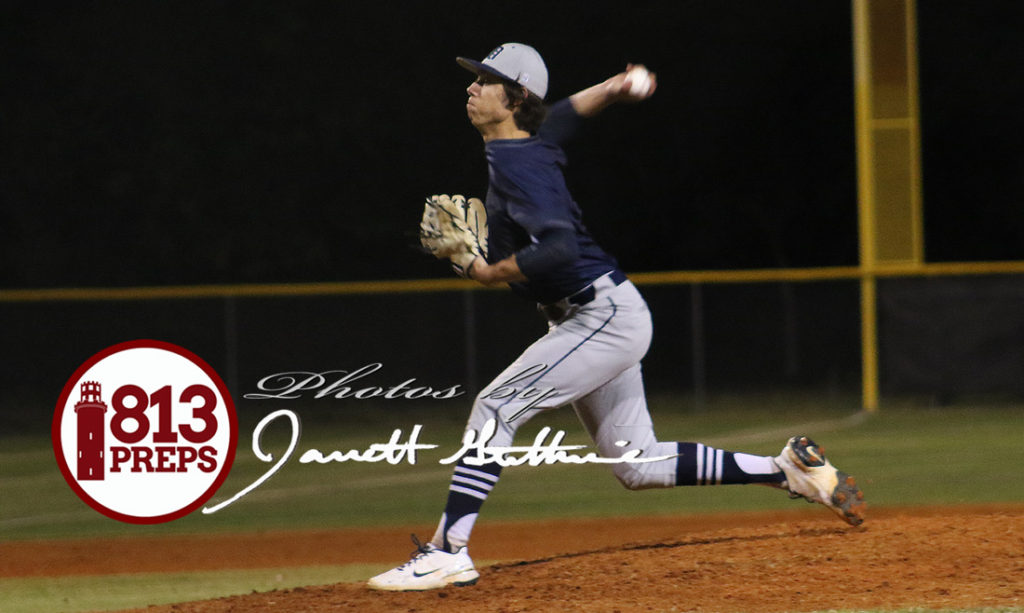 PLANT CITY – Durant ace Sean Hermann had 15 strikeouts and went the distance in a 2-1 home victory against Steinbrenner in the opening round of the 16-team Saladino Gold Division Tournament on Saturday.

Austin Sewell and Carlos Morales also shared the spotlight with sixth-inning doubles to produce the winning run off Jacob Statman, who fashioned a solid complete-game performance of his own. Sewell, who had advanced to third on a groundout, knew he was homeward bound when Morales made contact.

“He got a really good swing on it. I was just ecstatic,” Sewell said. “I knew that was it right there. I knew Hermann was going to go and get those final three. He did his job, and fortunately we got enough runs for him.”

“They ended up giving me a run, and I knew I was going to come out in the seventh and win it,” said Hermann, whose last eight outs came on strikeouts.

The upset-minded Warriors (3-8) came up with their only run – and the only one Hermann has allowed this season – in the top of the first. Tayden Hall hit a two-out double off the senior right-hander; courtesy runner Carson Kane took third on a passed ball and crossed on an infield single by Chris Roberts.

The fourth-seeded Cougars (7-2) scored their initial run in the second. Javier Quintana hit a ground rule double with one out, reached third on a base hit by Morales and scored on two-out single by Aiden Welsh.

Durant will stay home to face Lennard (2-3) – also a 2-1 winner in Saturday’s early game against Plant – in a quarterfinal contest at 7 p.m. Monday. The teams met in a regular-season game Feb. 22, won by the host Cougars. The rematch survivor will suddenly be within two victories of its first Saladino championship.

“That would be wonderful to have that,” Cougars coach Butch Valdes said. “It would be something special.”

Steinbrenner coach John Crumbley, a Florida High School Athletic Association Hall of Fame inductee who won this tournament with Steinbrenner in 2016 and three decades earlier with Jesuit in 1986, is not enthused at the moment with this year’s entry.

“Winning one game a week is not competitive,” he said, “and not making adjustments like we’ve asked them is non-competitive, so we just have to keep working.”