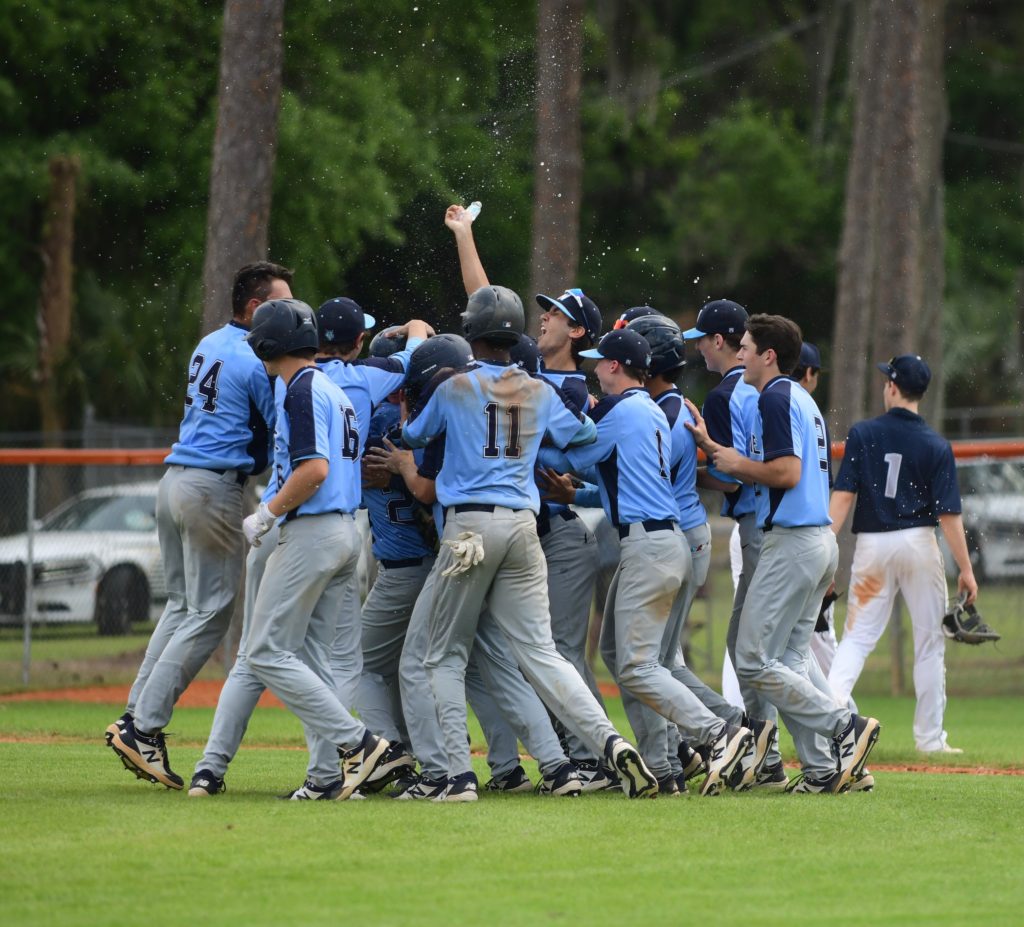 Newsome answered a two-run top half in extra-innings as junior Evan Wainman’s double started things off, and a bases loaded walk drawn by Caeden Diaz walked off the game as the Wolves scored three runs to win. Diaz also had an early RBI single for the Wolves and Jadon Kilpatrick’s groundball and Nick Carroll’s RBI bunt tied things in the ninth. CJ Hanson (double, two runs, RBI) and AJ Graham (three runs, RBI) each had three hits for the Cowboys, while Frank Perez had an RBI double a run-scoring groundball earlier in the game. Diaz and Matt Giles had RBI hits for the Wolves.

A first-inning RBI bunt from Javier James, a two-run double by Dylan DeGusipe and a solo homer from Jaiden Duarte gave Jefferson a big early cushion as the Dragons cruised to a win over Riverview Monday afternoon. Senior Carson Moore allowed two runs in four innings on the mound to earn the victory, while Kevin Lopez finished off the pitching with two scoreless. DeGusipe added a two-run single in the sixth, Matthew Johnson was 3-for-3 in the win, with an RBI double and two runs scored. For the Sharks, Christian Tavarez had two liner singles in the game, each driving in a run, while Gerard Lopez went 2-for-3 scoring twice.

Matthew Ward’s RBI single started a Plant comeback in the fourth inning, followed quickly by a Bryce Pelleriti two-run hit and the win was salted away by a two-run blast from Jack Meade as the Panthers topped Steinbrenner on Tuesday. Zach Kilby pitched 4 1/3 perfect innings of relief for Plant striking out five. Steinbrenner took an early lead on a passed ball in the second and Tayden Hall’s solo home run in the third was the Warriors lone hit of the game.

Leto got on board and created typical havoc as the Falcons stole seven bases and hung a pair of runs in each of the fourth and fifth innings. The Falcons scored the first three runs on a wild pitch and two errors, and junior Brayan Cruz singled in another run. Coltin Pizzio was 2-for-4 with a run scored with a stolen base, while Shabazz Brumley added another hit and a stolen base to his solid tournament thus far. However, it was the Falcons pitching tandem of Christian Gonzalez (win, 5ip, six hits, six strikeouts) and Alberto Attias (Sv, 2ip, four strikeouts) which led the way to victory. For Bloomingdale, Jack Owens struck out eight in 4 1/3 innings of work allowing four unearned runs and was tagged with a loss. Owens  did have a triple at the plate, and Marlon Bowen was 3-for-3 for the Bulls.

East Bay pitcher Ben Potsic scattered three Robinson hits, pitching five innings as the Indians offense ended things early with a seven-run fifth inning. Riley Linne’s RBI sac fly gave East Bay all it would need in the first inning, but the senior padded his stat line with an RBI single and a run scored later in the game. Jeremy Galen was 2-for-3, with a walk and scored twice, while Javy Lopez was 2-for-4 with an RBI single and a run scored. Joe Whitaker had a double for the Knights.

Elijah Burse’s second home run of the tournament forced extra-innings, and Tanner Jones sealed a come-from-behind win for Hillsborough when his walk-off double scored freshman Cameron Mallo in the eighth. Mallo was 2-for-3 in the win, with an RBI and a stolen base, while also striking out three in an inning of relief and earning the win in his first high school appearance on the mound. Skyler Netolicky and Bransen Angel combined to strikeout nine for the Terriers on the mound. Marcos Herrand pitched 6 1/3 innings for Brandon and had a run scored on offense, while Kendal Spencer was 2-for-3 at the plate but was tagged with the loss. Daniel Santana and Johnny De La Rosa had RBI for the Eagles.

Freedom stretched out an early lead and held on through sloppy play as Armwood charged back to within a run, before reliever Joey Wey’s strikeout ended the game and sealed the Patriots one-run win. Raul Olivera was 3-for-4 for the Pats with a double, two runs scored and two RBI, while EJ Reyes doubled and scored twice, while also driving in a run, and Jackson Seidl was 2-for-3 with a run scored on offense. For Armwood a five-run seventh keyed by KJ Leshko and Matt Hall’s RBI singles and a two run double from Geomar Colon was halted just shy of tying things up in the final frame.