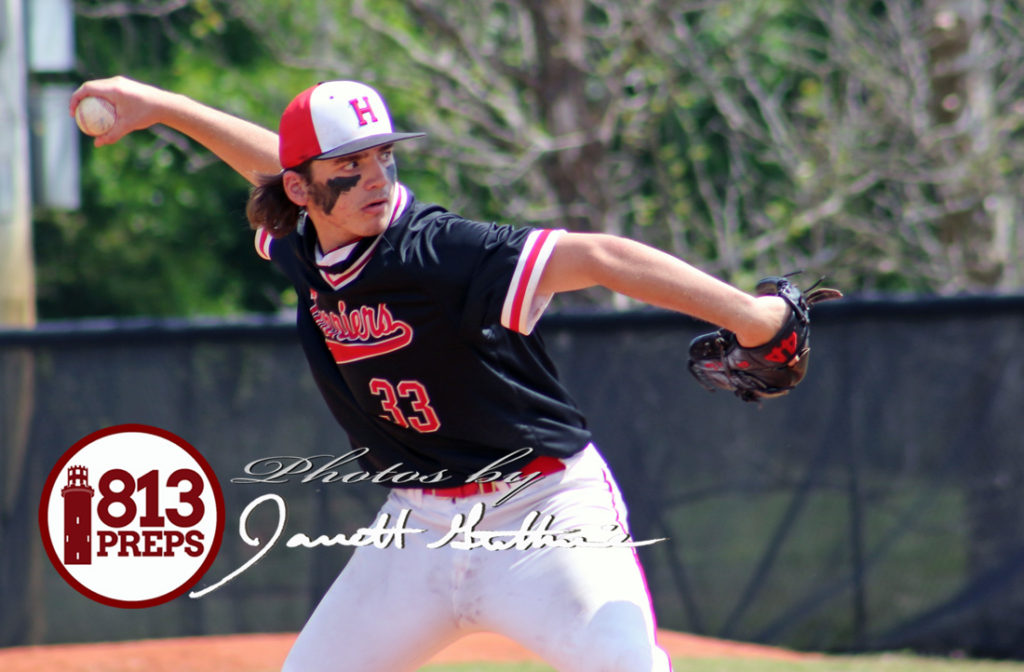 DOVER – The Saladino Tournament Silver Division semifinals were battles to the final out as Freedom rallied back on King in the seventh to take the lead and hold on for a 7-6 win. Similarly, Hillsborough stretched out a seemingly comfortable eight run lead, only to have a tenacious East Bay push it to the brink with the Terriers booking a spot in tomorrow’s Silver Bracket final with a 10-7 victory.

In the breakfast game at Strawberry Crest, King senior David Twiddy’s unbelievable tournament continued to explode, when his two-run triple – his third hit of the game and 10th hit in three tournament games – pushed the Lions lead to three after six innings. 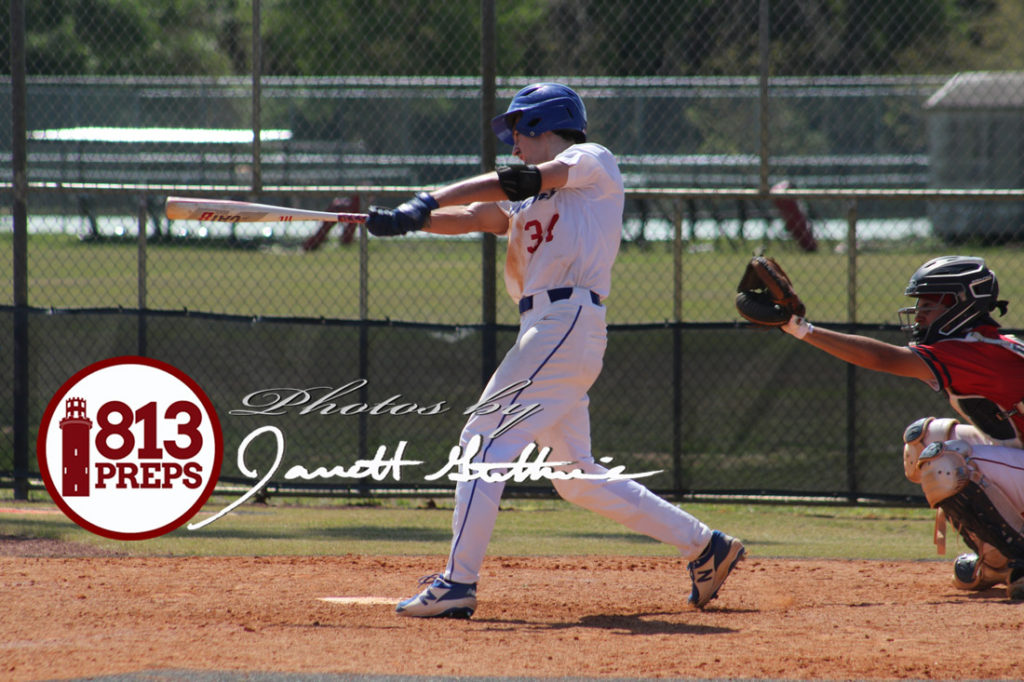 King senior David Twiddy connects on his two-run triple in the sixth inning.

But Freedom was undeterred and they put balls in play and got some help from three King errors in the seventh to answer with a five-spot highlighted by a game tying, two-run single from Raul Olivera, followed shortly by a game-leading RBI single from EJ Reyes (3-for-4, two runs), and an insurance run on the final of six Lions errors.

“It was great to give this win to my team with those two runs,” Olivera said. “I’m really excited for tomorrow’s championship – I know we are gonna win it.” 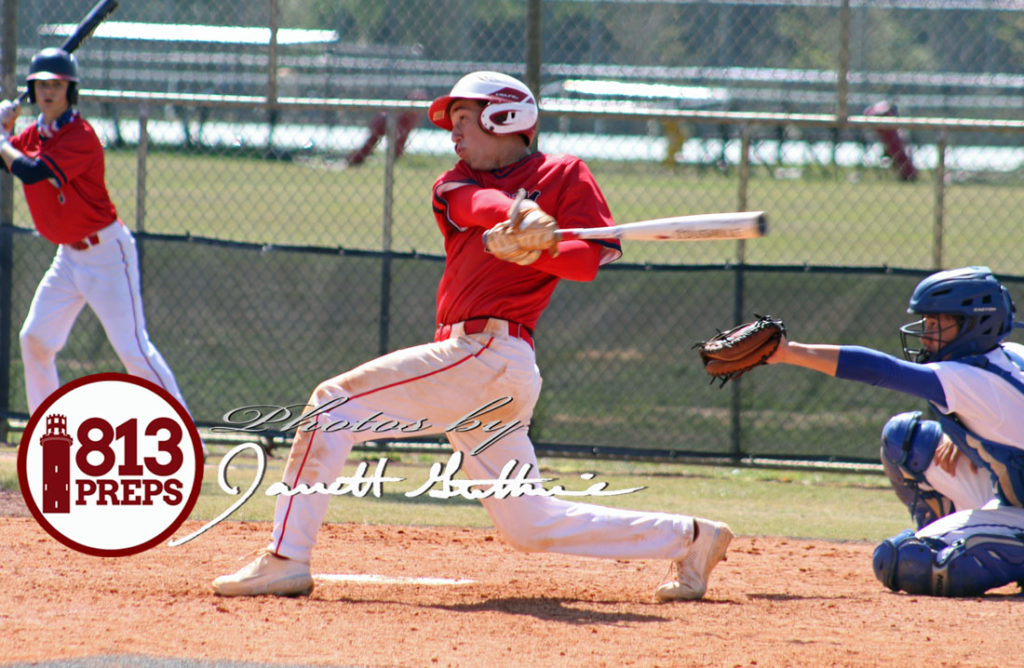 Freedom’s Raul Olivera drives in a pair to tie the game in the seventh, and would score the deciding run later in the inning.

Patriots coach Tripp Merrell said he knew if the game stretched out and the lineup turned to Olivera he felt like his team would be in a good spot.

“I knew if we got to Raul that we had a really good shot at executing,” Merrell said. “And getting three on in front of him, I was confident he would do what he’s been doing all season.

“I can’t ask for more out of the bottom of our lineup to get him the chance.” 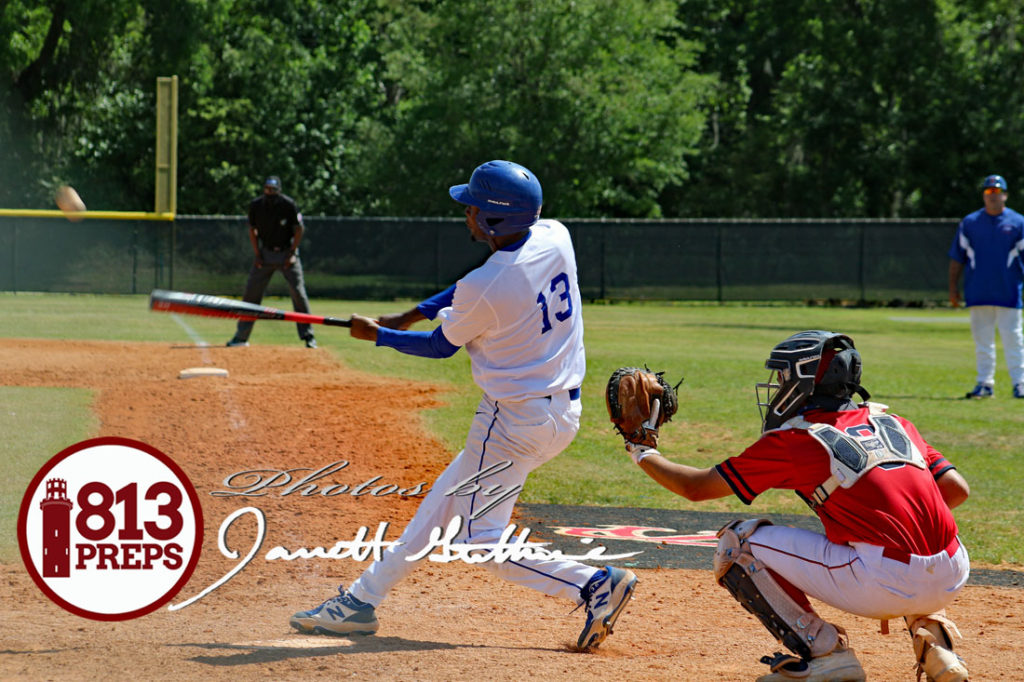 King senior Dontavious Johnson sends this one out over the right field wall for a solo home run.

That insurance run, scored off the error on a ball off the bat of Joey Wey, which scored Reyes proved pivotal as King senior Dontavious Johnson cut into the lead with a solo shot to right. But Wey, who worked the final two innings of the game closed the door and earned a win in relief. 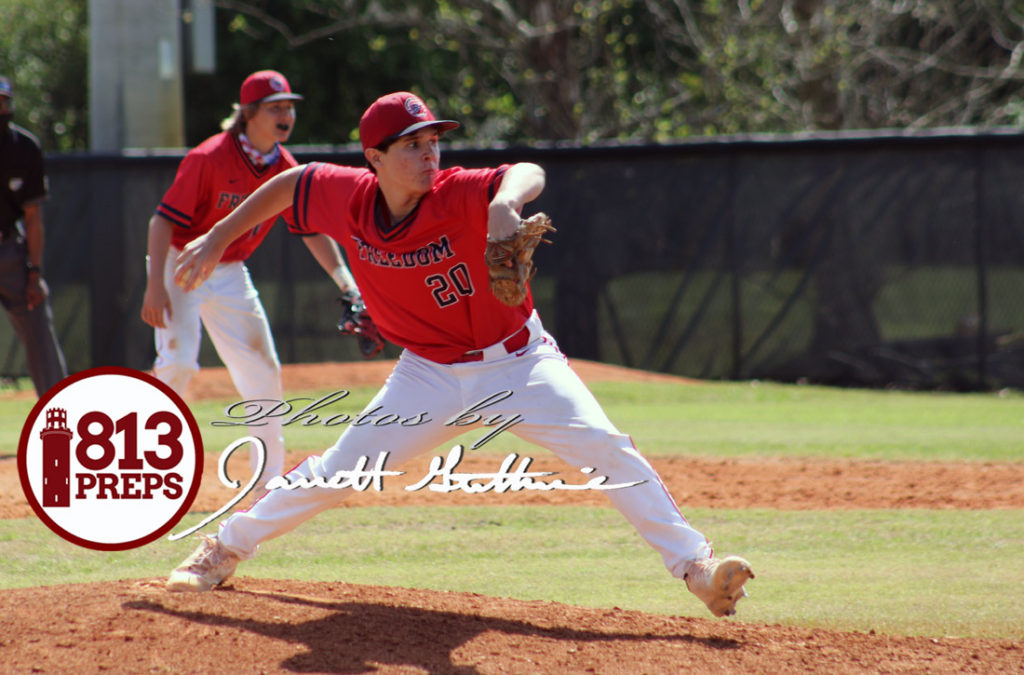 The home run aside it was a tough loss for Johnson on the mound, going 6 2/3 innings, allowing seven – but just a single earned run.

The late runs from King in the sixth led to something Merrell said he was very proud of in his team.

“You know, we’ve had those kind innings before this season and they’ve killed us – teams have just buried us,” Merrell said. “We’re turning the corner, understanding that if we give up a couple of bad plays, just go out and get them back the next inning.” 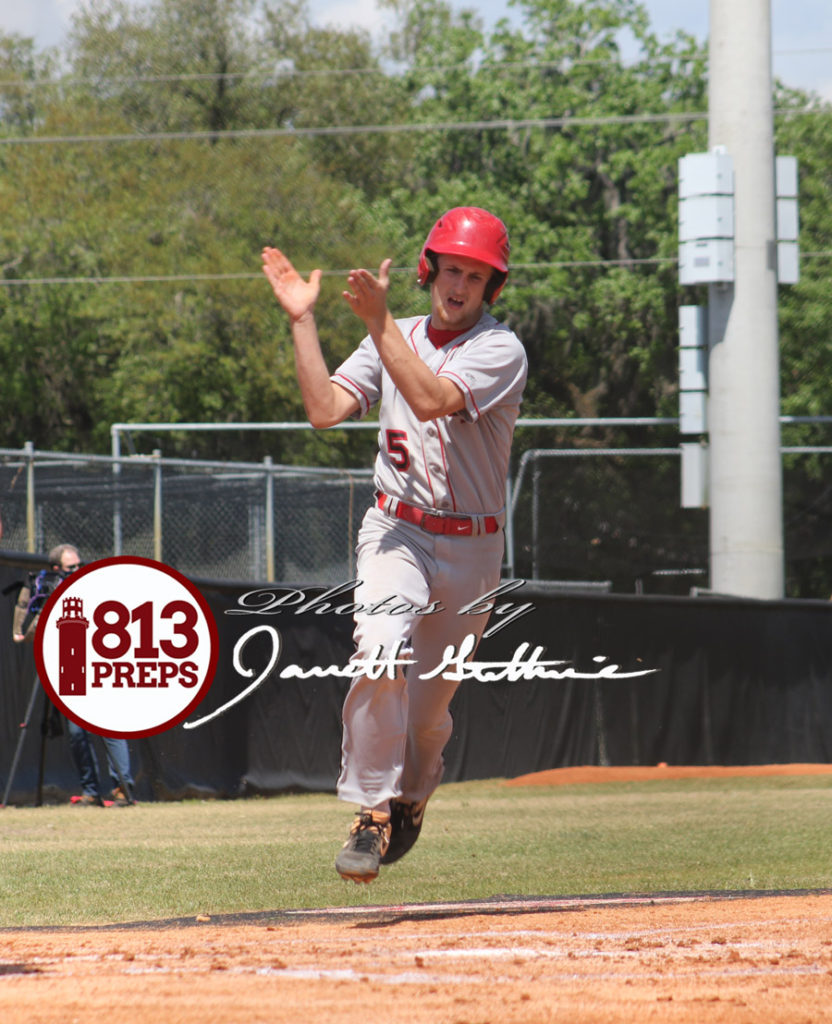 In the afternoon game, East Bay used some good two-out hitting to get on the board in the bottom of the first as Jeremy Galen singled and came around on an RBI double from Alek Mangual.

The Terriers answered in the third with an RBI triple from Tanner Jones (2-for-3) and an RBI sac fly by Salvy Urso.

Indians senior Riley Linne’s RBI single in the fifth tied up the game, but the Terriers went full-throttle in the sixth, scoring eight with Elijah Burse giving his team the lead and a two-run double from senior Brady Burgess adding some insurance. Hillsborough batted around in the inning with Kyle Bincarousky singling twice, including a two-run hit in his second at-bat of the frame. The senior had no idea at the time his added two runs would be so pivotal, but he said he wasn’t ever taking an at-bat off, no matter the score. 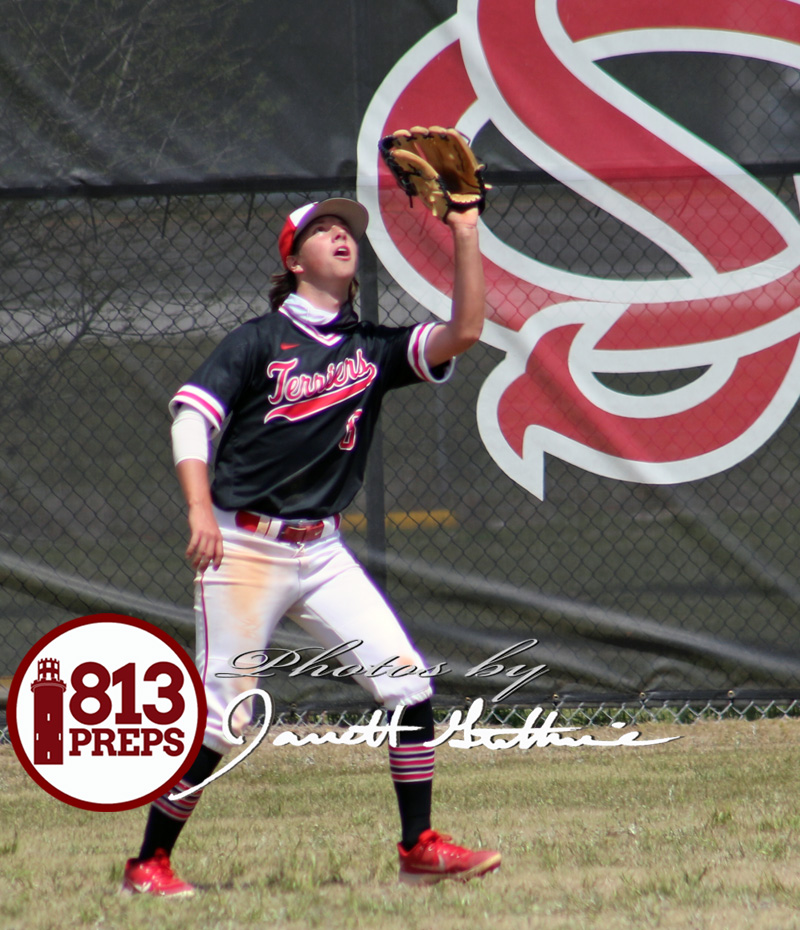 “Every run matters and the game is not over until that third out of the seventh inning,” Bincarousky said. “Respect to East Bay. They didn’t fold and put the bat on the ball and we had to fight to the end.”

Hillsborough (9-2) junior Donald Gorgei had a pair of doubles, including one that plated two in the sixth and after the game he echoed Bincarousky’s sentiments of continuing to add on for a “never know” situation.

“(East Bay) was a really good team, and I knew they were not giving up and you saw them get those runs in that last inning,” Gorgei said. “But this is a good team, too, we keep hitting and good things happen.”

Urso was steady on the mound for the Terriers and looked poised to finish off the complete game, but an error started the seventh and he was chased after a six-strikeout performance.

“When your team puts up that many late runs for you, that just feels amazing,” Urso said. “It changes the game, they put their heads down over their, but not for long.

“They (East Bay) battled over there the whole way. This was a fun game.”

Hillsborough turned to Caden Ross in relief, but East Bay was not going away easily as a bang-bang double-play call made by the umpire ignited the Indians offense. RBI hits from Mangual, and a two-run double from Carlos Campos, and another on an error tightened the game. 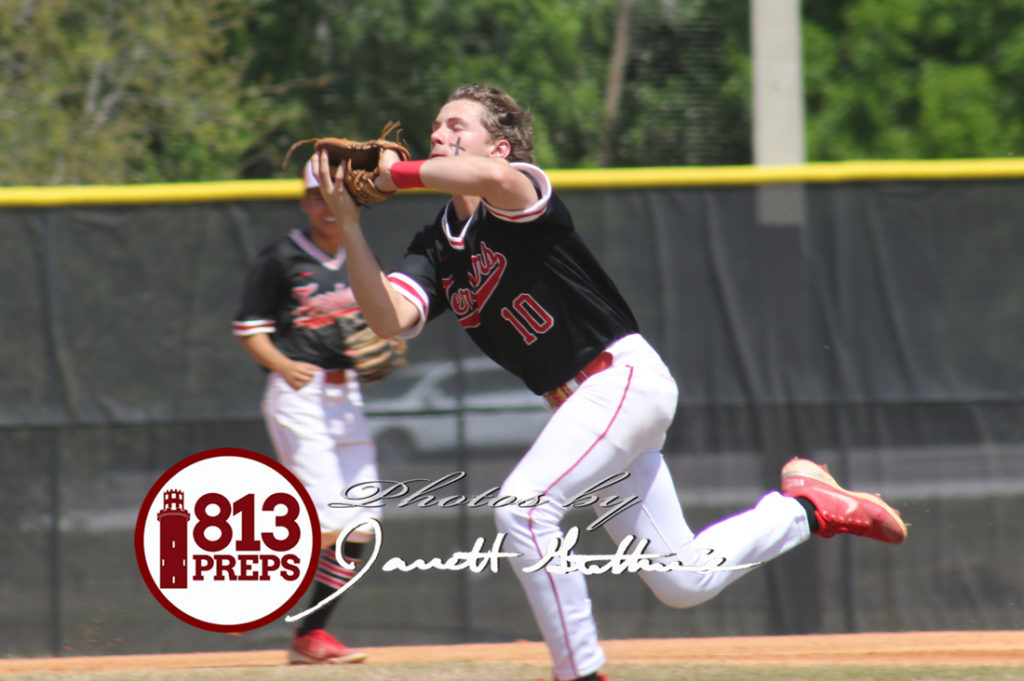 Terriers freshman Cameron Mallo makes a catch on the run coming in from second base.

However, the rally was stopped there as Hillsborough freshman phenom Cameron Mallo moved from second to the hill fired in three pitches, getting a ground ball game-ender.

Wednesday’s Saladino Silver Bracket final between Hillsborough and Freedom is TBD in both time and locations. Make sure to follow our Twitter for updates when we get them. 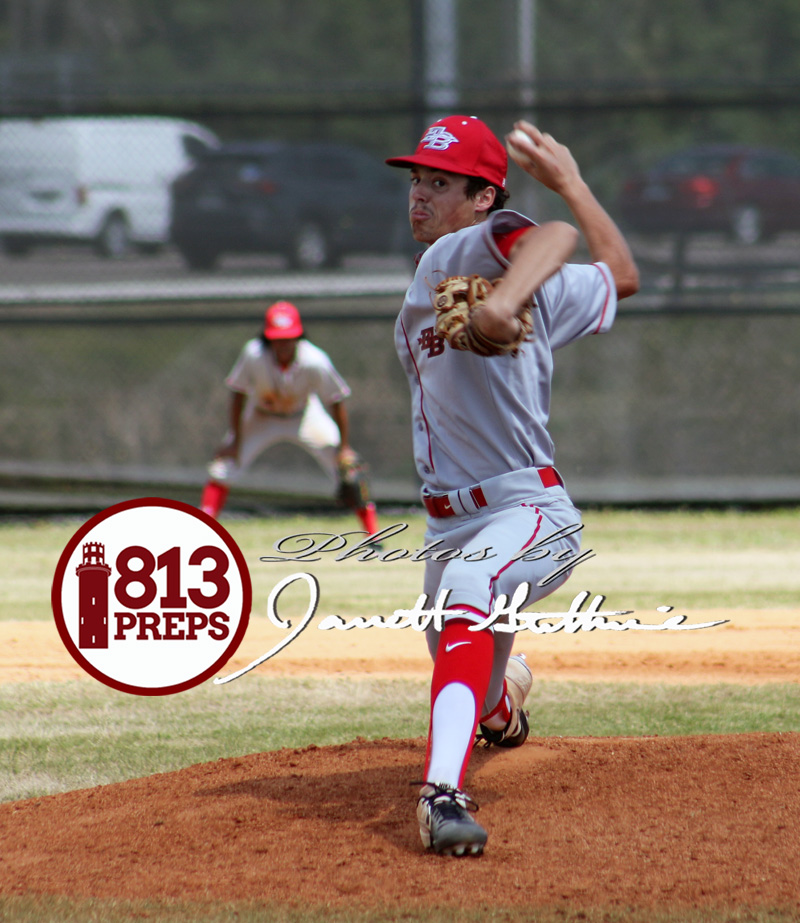