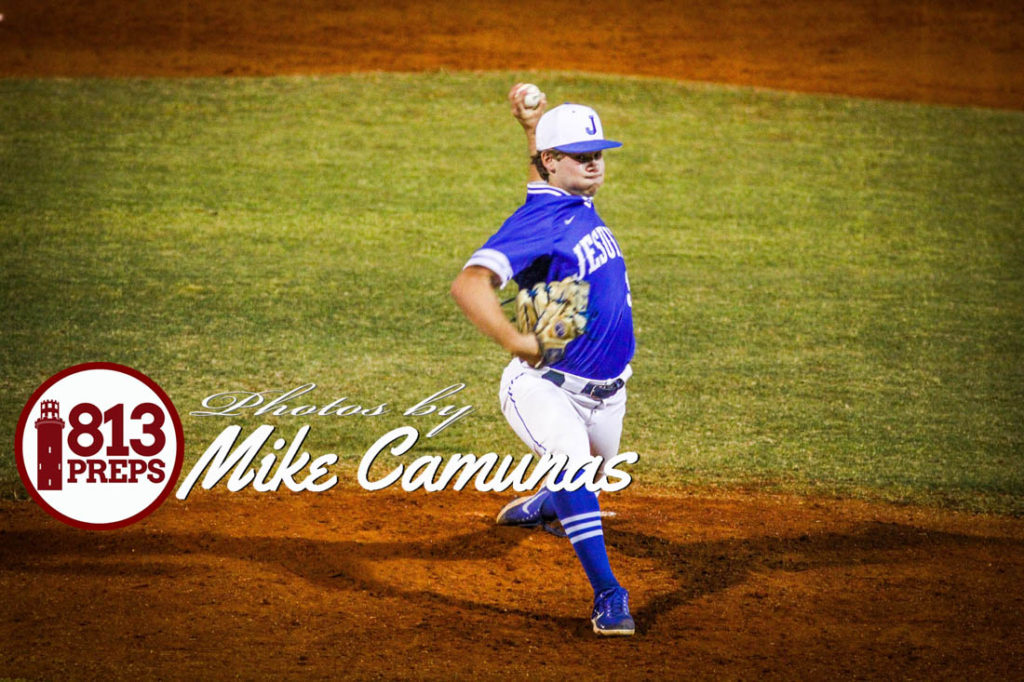 Jesuit senior pitcher Dominic Castellano pitched four innings as the Tigers claimed a third Saladino Title in its program’s history. The UCF committed lefty struck out eight and earned his third victory on the mound (photo by Mike Camunas).

TAMPA – In any other setting the word immaculate means perfectly clean, tidy, or neat. In the Catholic faith, however the word means free from sin. In Wednesday’s 40th championship final in the history of the Tony & Bertha Saladino Baseball Tournament, an “immaculate” inning fired in from Jesuit senior Dominic Castellano to start the final against Durant, set the tone – and after pumping in nine straight strikes there were likely a few under-the-breath utterances from the opposing dugout that would call for a visit to confessional.

Castellano, a senior signed to the University of Central Florida who just six nights prior no-hit Sarasota, cruised through four innings of work on the mound as his offense exploded early and pushed the game out of reach. Jesuit, a sporadic entrant to the Saladino over the years primarily due to the school’s and Hillsborough County Public School’s spring break schedule not matching up, claimed its program’s third-ever championship, defeating the Cougars 10-2.

Winning the Saladino in 2017 (31 years after its first tournament crown) in the team’s last tourney appearance meant this current group of players didn’t have an exact view of the importance of the event within the community. But after battling through a four-game stretch, Castellano said the impact of Wednesday’s game was something he and his teammates were still taking in even after the final out was made.

“I think now, winning it, we realize how big of a deal it is to win this tournament.” Castellano said. “I think not being a part of it the last few years, it didn’t really click for us. But to get in and bring it home is pretty awesome.” 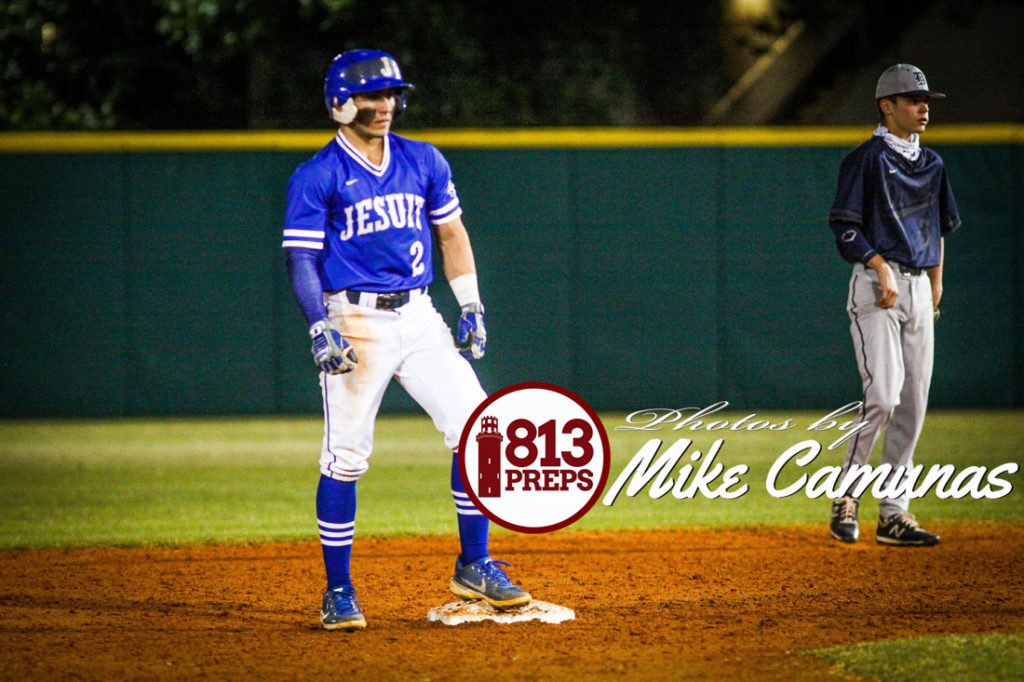 Jesuit senior Bradke Lohry stand atop second after his leadoff single in the first. He would score the first of six first-inning runs for the Tigers, and finished 2-for-3, with two scored and a stolen base (photo by Mike Camunas).

After Castellano’s quick 1-2-3 to start, senior leadoff hitter Bradke Lohry did what he does best, kick-starting the Tigers offense with a leadoff double, scoring the first run on a Cole Russo groundball. Errors built for the Cougars – three of them that extended the inning – while two more doubles from AJ Nessler and Jack Martinez pushed the lead out and Wes Mendes RBI single rounded out a six-run first.

“It’s all about setting the tone,” Lohry said. “I’m the first batter for our team and my guys follow me, so if I can get on for them, I know they are going to drive me in.”

Jesuit (11-1) never looked back, as a ridiculously deep pitching staff worked steadily throughout the tournament and continued that against the Cougars lineup most of the night.

Senior BJ Graham had a pair of hits, and like Lohry scored twice, but made his biggest contribution in the fourth when the left fielder booked it in on a shallow liner and made a diving catch out in front to end a scoring threat.

“Honestly, I saw the ball off the bat and I knew I had to get to it,” Graham said. “I knew if they scored that run and kept the inning going, they could start building momentum. So, I went for it all the way and made the play.” 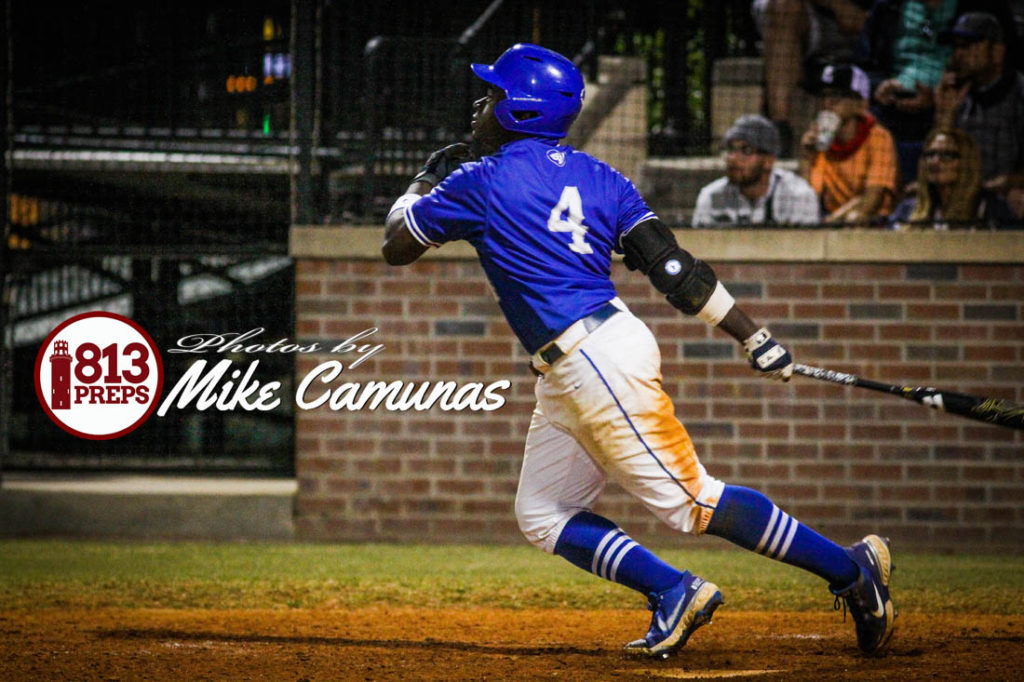 Tigers senior BJ Graham scored twice in his 2-for-4 night at the plate, adding a stolen base and a huge diving catch to keep momentum in his teams favor in the fourth (photo by Mike Camunas).

Durant (9-2) scored its first run earlier in the fourth on a two-out RBI single by Javy Quintana, and added one more in the seventh when Dylan LaPointe singled on a hard-hit ground ball to the left side.

After the first inning though it was mainly routine as Castellano (one run, on one hit and one walk, finishing with eight strikeouts) cruised, before giving way to an inning each from Macklin Miller, Gavin Sissel and Ryan Denison, as the staff combined for 12 strikeouts in the win. Graham said he’s enjoyed watching Castellano do his thing on the mound over his last two starts with one run and one hit across 11 innings with 16 strikeouts.

“Dom is a great pitcher, he just dominates on the mound for us,” Graham said. “Consistency is the key for him, he goes about his work a different kind of way and that’s why he’s one of the leaders of this team.”

A tough challenge was answered for Durant however, as junior Weston Sanchez entered with the bases loaded in the third and after walking in a run and allowing a sac fly to score another (both charged to the previous pitcher), tossed four scoreless innings, striking out three and only allowing a pinch-hit single from Miguel Menendez Jr.

“It was tough and for him to go in, be that last man in a game like that,” Jesuit head coach Miguel Menendez Sr. said, “for him to keep them in it, not let us finish it early he did a really good job.”

One of the Tigers captains, Lohry said after the game he was thrilled to have etched his senior team into Hillsborough County’s premiere high school baseball event’s long legacy.

“It is amazing to be a part of the tradition,” Lohry said. “It’s always awesome to have the stands packed and all those people watching. It is just amazing.”

And … here … we … go!!! @JesuitBaseball v @Baseball_Durant for the 40th #Saladino2021 championship!!!! Follow us all night long do updates, scores and THE best #hsbaseball coverage in the area! ?: @MikeCamunas ?⚾️ pic.twitter.com/V02RnYp9lA